Stealling away for a walk

Stealling away for a walk


After a damp and cloudy walk the day before, I spent much of Tuesday morning travelling, checking the forecasts and pondering my options. The rain and cloud that had arrived so soon yesterday seemed to be clearing further west. With hopes of a good afternoon, I found my way to Fort William, then into Glen Nevis for a very-late-morning start.

I reached the top car-park in Glen Nevis and got booted up, though decided against gaiters; in hindsight, they could have been helpful for the early stages. I also planned on topping up with water before reaching the higher slopes; there proved to be plenty of changes for that lower down on An Gearanach.

There were several showers while I walked the steep stone path alongside Nevis gorge. That (and presumably earlier rain) left puddles and wet rock, so I took it cautiously (and also slowed to don a jacket). But the skies were clearing and sun beaming down by the time I emerged into the open meadows and stunning sight of the Steall falls. There were a few folk at the wire bridge when I approached, but they were off it once I'd stowed my walking poles to make the crossing. The river was fairly low, but using the wires might put me in the frame of mind for scrambling later on. Being a fair height, without anyone else on the wires to sway the bridge, I managed to cross without incident. I crossed the next water slightly downstream, where there were more stones, then met a real obstacle.

There is a path leading east from An Steall, but I found it more of a boggy quagmire. So the next couple of hundred metres saw a lot of squelching, testing footing, hopping, jumping - and ended up with me bringing a generous amount of mud once I reached some firmer ground. A well-made path zig-zags up the Coire Chadha Chaoruinn, steep enough that I was grateful for a bit of shade from some (rain-free) clouds and the hillside above. There were good enough views in most directions to excuse a few breaks along the way. Steall meadows from An Gearanach

The path that I followed emerged onto a northwest shoulder of An Gearanach - though seemed to take a different course than shown on my OS map. Things ease off to approach, then skirt around, a small top before a last ascent to the summit itself. This was the start of a fine ridge section, with scrambling along the later part. I stowed my walking poles, though in these good conditions it was interesting, rather than demanding, going. The descent from An Garbhanach gets steeper, though the route stays fairly clear. The next hill, Stob Coire a'Chairn, is easier going, with a short enough ascent to hardly feel like a separate Munro. It did offer a view back over the route so far, as well as clearing skies and superb hills all around. 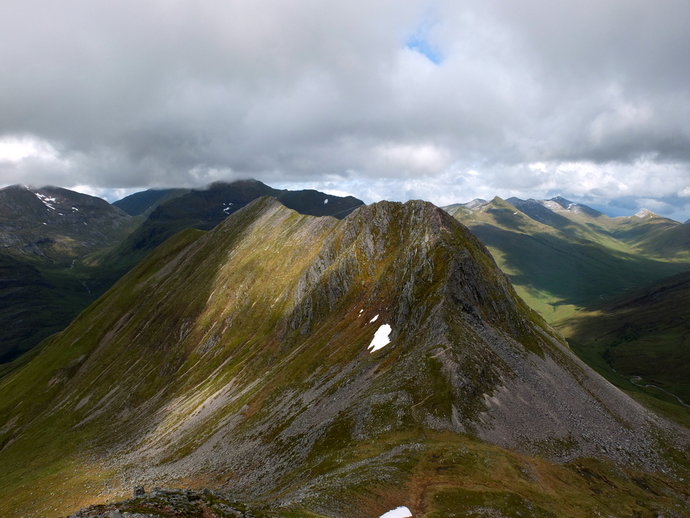 I followed the ridge southwest, across a smaller top towards the imposing Am Bodach. There's a clear path up its northeast ridge (again, not shown on my map), though the ascent is short and steep enough that much of it calls for a hand or two. The clouds were still shading me, so I didn't pause long enough to take in the views until reaching the top, with fine prospects including the second half of the walk ahead. 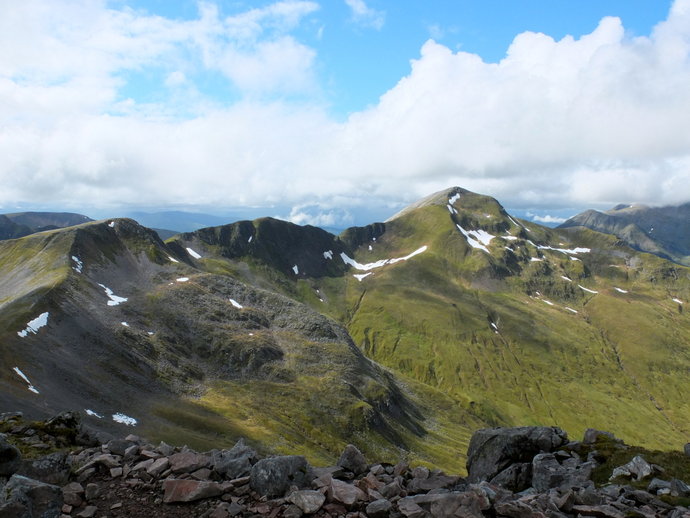 Ahead from Am Bodach

There are more rocks, with a fair slope, to descend west off Am Bodach, but I found the going easier now. The path improves as the gradient eases, providing a straightforward approach to Sgurr an Iubhair. I paused here to refuel and take in the views, as well as steel myself for the Devil's Ridge ahead. Another couple of walkers were also settled near the cairn, though as it turned out they were to leave southwards, rather than share my route along the ridge. But there was a further group of three ahead of me, providing some reassurance. I followed in their footsteps (and the well-worn path) up to the next Top, Stob Choire a'Mhail, where the glorious weather showed off the earlier stages of the "Ring". Am Bodach and Sgurr an Iubhair

But I couldn't put things off forever, so back on with my pack for the ridge itself. I saw the trio ahead of me climbing a chimney-type feature, though they were a little way ahead once I'd donned gloves then made my way down to the bealach beforehand. The chimney is in the centre of this shot, left of the rock spire and slightly lower than the walker in the red top: To the Devil's Ridge

As it turned out, I decided to scramble over and between the small bouldery towers to the right of the chimney, though their route was probably more sensible. Most of the ridge following it was a worn path (though with a steep drop, especially to my right) until that dipped to join the main body of the hill. This called for another scramble down the rocky section in the lower middle of this pic (viewed after descending and starting up Sgurr a'Mhaim): 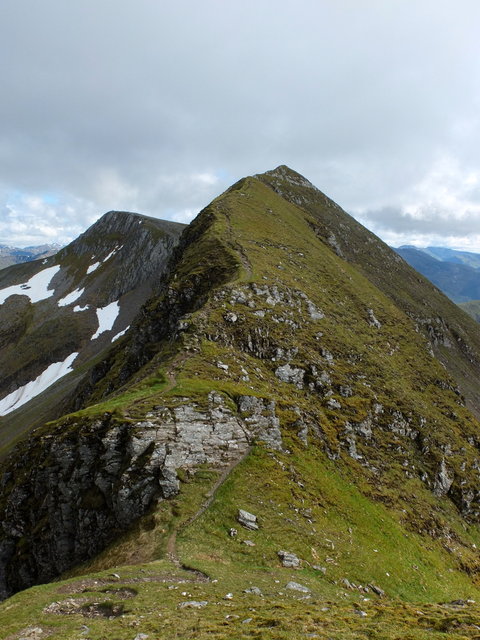 Descent from the Devil's Ridge

The group just ahead were just finishing. Again I took a slightly different approach, descending the stepped slab (steep, but with plenty of large holds and ledges) just a few yards away (to the left, from that viewpoint).
The remaining climb was moderately steep, but with a path leading up to the large heaped quartzite cairn. There was still a lot of snow in the sheltered northern corrie, though I resisted the temptation of a sliding descent. After further views and a brief break, there was a long descent to reach Glen Nevis about 1000 metres down. This path starts out steep and rubbly, over the quartzite blocks that top many of these hills, and continues roughly for most of the way. It only, eventually, eases at around 300 metres, joining a path from Coire a'Mhusgain. I met the walkers from Sgurr an Iubhair again and realised that they had descended through the corrie, bypassing the ridge and Sgurr a'Mhaim. This path leads down among scattered birch and wildflowers to join the road back up Glen Nevis.

Rather than take the road (as some others were doing), I spotted and decided to follow a footpath on the south side of the river, signed for a bridge 1 mile on. That felt more pleasant than the prospect of slogging up tarmac, with (fading) bluebells and views south. All the same, the early-evening sun felt warmer than I wished, while the path climbed then descended again, something that always grates during a walk-out. Even after finding and crossing the bridge (this one does feature on the map), there was almost a mile more to go along the narrow road. But that felt like a modest repayment for the stunning walk I'd had, as well as how the weather had improved during the day.