The one they call cheesecake and Lurg Mhor

The one they call cheesecake and Lurg Mhor This was a memorable walk but, as it turned out, not the most enjoyable one. It was reasonably eventful though. The theme for the day was route recognition and time. It all started pleasantly enough. We'd pitched our tents the night before on a wee strip of soft ground in the Allt a' Chonais and woke up to mild temperatures, mist and the midges from hell. Have you tried enjoying a nice cup of tea with a head net on and the backs of your hands completely black with the critters? We still managed to take our time getting ready. A man strode by, apparently confidently, swinging his long poles, crossed the Allt at the wire 'bridge' 200 yds ahead and disappeared. We soon followed him. Behind us was Ibrahim (as we later found out). I strode confidently across the burn but Ibrahim went for the bridge. We struck up a conversation and chatted all the way to the Bealach Bearnais, talking about our jobs, injuries, kids, hills, and we didn't see the time passing. There were no views to be had anyway. The clouds were really low with 100% humidity. We parted company on the Bealach. Ibrahim was shadowing a group of teenagers, pupils at a famous private school, who as part of their curriculum had to practise navigating and leadership skills. So he stopped to wait for them, whilst we continued up, ready for the ascent to Beinn Tharsuinn. We disturbed a couple of ptarmigans in the process.

We struck west up the first steep slope. As we were about to strike up the second bump that leads to the 817m top, we met, coming in the opposite direction towards us, the stridy man who had passed our campground with such confidence 90 minutes before. On seeing us, he uttered a cry of relief - he was lost. He had apparently been wandering about for an hour (as much as that?), lost in the mist, unable to locate himself. I asked him where he was headed and he pointed to Sgurr Choinnich on his map! He was indeed completely lost, yet had a map and a compass. He was however quite befuddled. I showed him on the map where he was and explained he was in fact headed for the hill they call cheesecake and Lurg Mhor and we offered to take him along with us. He declined and by then seemed fed up and wanted to go back to safetyl He kept asking us for the way back to the bealach. In my experience the only way to answer this question is to get a compass bearing and follow that. Simply gesturing 'this way' is no good as the aspect of the terrain can change so much in the ebb and flow of the cloud that the gesture itself becomes meaningless at best and misleading at worst. I found myself having to deploy my stern lecturer voice and insist that he follow (and trust) the compass bearing. We bade him good luck (he really wasn't far from safety) and watched him stride off, this time his demeanour slightly more panicked and urgent. I hope he found his way back OK. Tumbling down to Loch Monar Looking west towards Loch an Laoigh

We continued over to the 817m, reached the summit of Beinn Tharsuinn (863m) and there enjoyed a parting of the cloud, a steep rise in temperature and some great views over Loch Monar and the steep sides of the hill they call cheesecake... Past the lochan we headed for the shoulder which separates the summit from the western end of Beinn Tharsuinn. There we saw the drystane dyke which links the lower slopes of the Beinn with those of the hill they call cheesecake. So we traversed to reach the dike, crossed over in the gap and started the ascent of the HTCC. So far so good. It was steep but presented no difficulty and soon enough we were scrambling up a narrow and dripping wet gully to the first ledge. We stepped on to the ledge in hot sunshine. Up until then the way had been punctuated by small piles of stones which had provided welcome reassurance. Once on the ledge however we couldn't see a pile of stones to help us find the way up. The buttresses of the hill were quite sheer and the gullys didn't seem feasible. So, foolishly perhaps, we resorted to the route description of a well known author and broadcaster, which told us to head right to find a way up. We lost a good 20-30 minute contouring the ledge, which by then was no longer that flat, scanning the cliffs for a passage up and in despair resorted to climbing straight up an almost vertical grassy and sodden gully. Sadly the mist rolled in just as we reached flatter ground. As we were off the route we had to guess where we were to get a compass bearing.

Soon enough we found the path and a lochan with a large slab slanting into the water like a tumbled down pier. In the mist the effect was quite spooky. After a quick stop for lunch, an hour behind our predictions, we resumed the climb up the surprisingly narrow ridge to the summit of the HTCC. We looked at a desultory looking cairn which was apparently the summit, and headed south-east down the long descent to the 740m col and up to far away Lurg Mhor. The summit is a bit of a let down to be honest but at least it's a slightly more reassuringly and unequivocally summit cairn. We decided not to press on to Meall Mor - there were no views and it was 4pm! So time to head back. Foolishly I thought it would take us 3 hours to get back to the tent. ha ha ha! No. We decided to return by the route of ascent and to follow the path back down the bottom of the HTCC carefully to see where we'd gone wrong. Lo and behold, as we clambered down the gully (quite easily really) that we should have gone up, I noticed a nice pile of stones indicating the start of the ascent from the ledge. I never saw it. Basically, as you get onto the ledge, cross straight over the boulders and flat stones and you will eventually see a small cairn indicating the start of the next ascent. 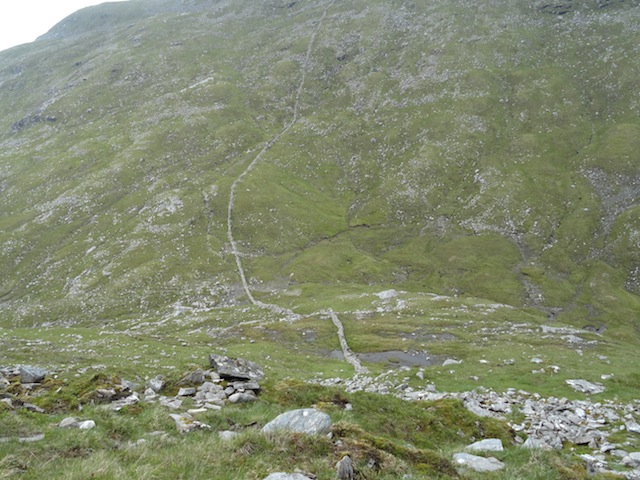 Reaching the gap in the drystane dyke at the foot of the hill was swift enough. But we began to feel tired and the climb back up Beinn Tharsuinn took longer than anticipated. We found ourselves in the cloud again and had to take another bearing to take us safely to the bealach Bearnais.

Then it was a rapid stride back down to the Allt a'Chonais. This time I crossed the Allt using the wire bridge, just for the hell of it, and we were back at the tent for 9pm! exactly 12 hours after we'd initially set off. I was ravenous, sweaty, a bit stiff, but also slightly underwhelmed. We got our two ticks but the climb up the HTCC lacked elegance, which left me strangely dissatisfied!

But no time for regrets. The priority was to shed all the wet gear, especially remove boots and socks to reconnect our feet with nice, clean and fresh West Highland air and take a quick dip in the Allt before the midges got to us! Then a quick dinner of chicken noodles, a rethink for the next day's adventure and a quick dash into the tents for a not so fitful sleep.