After a few days in Scotland a couple of weeks ago during which the extent of my mountain antics were confined getting drenched and blown around like a plastic bag on a few sub 2000ers in Perthshire, I jumped at the chance to pop up again when the forecast said those words we'd all been longing for for so many months: "HIGH PRESSURE!!!!!" So after Easyjetting it up on Saturday night I set off from Perth on Sunday with my tent for a few days out in the hills to procrastinate and get a tan. I started off basing myself in Fort William with the intent of heading further North and maybe doing a spot of backpacking in Glen Affric. However, upon seeing that there's still a lot of snow up there, and when the forecast looked better in the South West, I headed the other way.

The third day of my trip, I climbed Beinn a Bheithir from the carpark in South Ballachulish.

At 8am, it wasn't looking quite as good as the forecast had suggested (sorry about picture, driving and taking pictures at the same time isn't easy...), however after I set off things started getting better and better.

My route (I hope you can see it, not done this plotting on a map malarky before!) took me up the lower track marked clearly on old and new OS maps and described in various books including SMC and my (albeit ageing now) early edition of Cameron McNeish's book. Unfortunately, after the point at which another track (my descent route) cuts up to the right, this track barely exists anymore.

After a while I reach a burn, at which point the track disappears altogether. Eventually, I spot a 'clearer area' and a lucozade bottle complete with used tissue: this must be the right way! Surely enough, back on track.

About 5 mins more of pushing branches out of the way, and I reach a sign.

What, and fight my way back through those branches all the way back to South Ballachulish? I don't think so. To keep any lumberjacks that I might happen to encounter happy (after a quick look at the way ahead which was completely blocked by felled trees), I headed straight up the steep slopes to my right, avoiding the area of felled trees, but in doing so having to crawl under the lower branches of conifers and skirt green algae covered swamp (nice). After much cursing (but thanking whoever's up there for not blessing me with midges too), I emerged onto the final stretch of my 'track' able to see the full extent of the jungle I would have had to clamber through had I opted to ignore the sign completely.

And then rejoining the track, much later, sweatier, and covered in bits of tree than I would have been had I taken the slightly longer upper track, I rewarded myself with a much needed replenishing of sugar. Never mind: there's a mountain to climb!
Looking back:

So, crossing the crossroads, and reaching the cairn marking the start of the track to the bealach between Sgorr Dhearg and Sgorr Dhonuill, I was feeling slightly relieved to be out of that seemingly not entirely brilliant situation. Oh well, I thought, atleast there'll be a better path from here on in. Not exactly.


Let me explain: I'm not really an advocate of paths. They can be useful, but more often than not they become overly eroded and are more difficult and tiring to walk on than the sides of them. However, when it comes to dense forest, a path becomes useful. That is in as much as it gives you a route between the trees without getting all of the branches in your face.
Start of the path:

The path up to the bealach began very much in this manner, but quickly deteriorated and split into three or four trenches of mud between the trees. Also, because there are so many routes to choose from, none was really well enough used that the branches didn't get in your face anyway! So it's utterly pointless. This is for me, especially when steep, much harder and less fun than it would be just to follow the course of the burn, without any path, through the trees.

Waterfall in the forest

Emerging from the trees...

After emerging triumphant from the trees once more, again sweaty and covered in pine needles, the going gets much easier and it's a straightforward stride to the bealach with views opening up extensively back down over the forest to South Ballachulish.

At the bealach, I saw for the first time Fraochaidh and the hills of Appin (which inspired me to climb Beinn Sgulaird and Beinn Fhionnlaidh the next day). I ascended Sgorr Dhearg first, up the easy ridge of quartzsite blocks remniscient of Ben More Assynt, and in no time was on the summit by the broken trig point with an amazing panorama at my feet.
Fraochaidh from Bealach

After returning to the bealach, the ascent up Donald's peak was much steeper and rougher, culminating in a nice bit of exposure on the narrow crest just before the summit.

Last climb to the summit

Sgorr Dhearg from the summit of Dhonuill

Looking SW out to sea 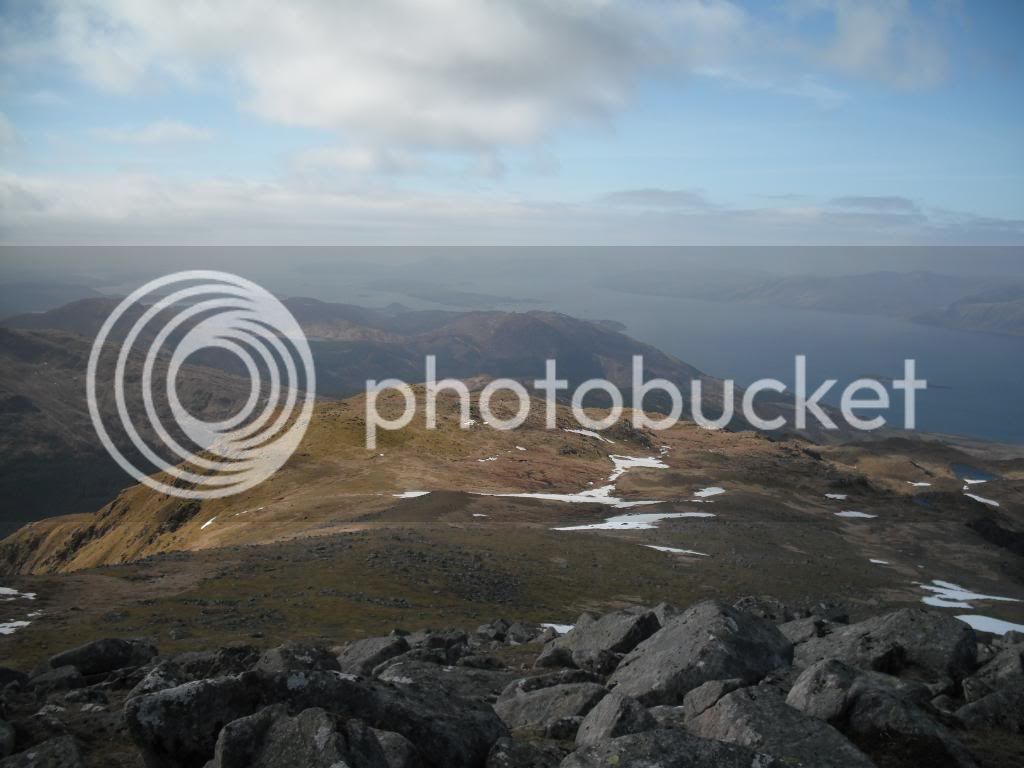 Moving West from the summit, it's an easy broad bouldery ridge.
Back to summit.

At this point, I initially heard, then saw, a pair of enormous eaglesque birds gliding about, but seemingly in some sort of dispute with a raven. What a racket, I sat and watched them for a while. Attempted to take some pictures, but just ended up with blurry sky! Somebody give me some money and I'll get a nice dSLR.

Anyway, upon watching for a while in the belief that these were Golden eagles, I began to notice that as the birds circled, their tails caught the sun and gave a flash - they were WHITE! Now as unlikely as it may seem and although I'm no bird expert, I believe this was a pair of sea eagles (A.K.A white tailed eagle) given the huge resemblance to the golden wonder.. A truly memorable experience.

I then dropped off into the coire for the descent to the forest.
Cairn marks the start of the descent route

This descent route is not for the faint hearted. It's an incredibly steep scree chute and it's pretty awkward going. It's easy to stray off the scree to the right but then on a mixture of steep grass and crags, cragfast's a comin' - it nearly did for me.
Views up and down, note no perspective of gradient

This tree does well to survive up here!

In the foot of the coire, there's a really well built path through the forest to rejoin the forest track where it curves back round and heads NE.

Foot of the path

Wee lamb having some lunch

Nice car in the carpark!

What a great hill! A truly memorable day, with a mixture of experiences. Being stuck in that forest first thing in the morning seemed like a long long time ago by the time I was striding back down the forest road with my shoulders bear to the sun.

I did this pair about 4 years ago, starting from the school. A really enjoyable walk. I walked up Sgorr Bhan first,through the heather, heading towards the arete which follows onto Sgorr Dhearg. The sweep of the arete is fantastic. Well worth the extra summit.

Thanks! The gpx map doesn't seem to have worked though, not quite sure why...will keep trying.

Awww, the first two Munros I ever did, way back in August '94. Happy memories. You didn't see an apple lying around somewhere in the valleys did you? It rolled off the summit of Sgorr Dhearg when I was up there ...

Love those hills, though they are a bit let down by the approaches...

So, crossing the crossroads, and reaching the cairn marking the start of the track to the bealach between Sgorr Dhearg and Sgorr Dhonuill, I was feeling slightly relieved to be out of that seemingly not entirely brilliant situation. Oh well, I thought, atleast there'll be a better path from here on in. Not exactly.

There's actually a new, better path up through the forest, which starts further NE and emerges from the forest just north of the old one you took. I've tried to describe it in the walk description on the site, but that is only in descent.

Aha, I saw what looked suspiciously like a firebreak or something a bit further round but didn't want to risk it, especially after my previous experience. I think we could coin a new phrase here, not 'should have gone to specsavers' but, 'should have looked at WH route description'. It's amazing how quicky the guidebooks become out of date. My Mcneish book has a big red sticker on the front: 'all 284 munros included'

I didn't encounter the quarry but I certainly found the little track up the side of the waterfall and through the pine trees.
They are a pain. But then the view from the top or even the bealach is wonderful on a clear day - especially the Paps of Jura.
Mist came down after completing Dearg, couldn't even see a way onto the ridge down to Ballachulish and the cornicing looked a shade very dangerous (it was this Feb). But I really enjoyed the hill. It was like Picaddilly Circus up there as well so I think a lot of people are attracted by how majestic it looks from all around.
Thanks for the nice report - oh and we were miffed to find during the descent the new path that would have helped on the way up.

Useful and enjoyable report. As for the dSLR - don't worry about it too much. I've got one and have never carried up a munro yet (just the occasional wee hill). High pressure in Scotland apparently indicates "settled" weather. What tends to happen is a countrywide cloud "settles" itself over the land