It was rather busy heading up the A82 and A87 on Saturday 7 June and I had an important deadline: to meet Jimmy (jamesjones) for a pint in the Kintail Lodge Hotel bar! After overtaking a few caravans etc. I made it to my B and B at Innis a' Chro near Morvich, and that evening honoured my commitment. This was the start of a fortnight in the Highlands: 7 nights in Kintail, and 7 at Spean bridge. This report deals with the first week.

8 6 14.gpx Open full screen  NB: Walkhighlands is not responsible for the accuracy of gpx files in users posts

Jimmy was doing the S. Glen Shiel ridge this day, so en route from Innis a' Chro to Lundie I picked him up where he'd parked at Malagan Bridge and dropped him off at Cluanie. On reaching Lundie, I encountered another walker who introduced himself as Dave, from Glossop. We agreed to walk the East Kintail 3 together. On Carn Ghluasaid, with a cloudy Sgurr nan Conbhairean in the background: Sgurr nan Conbhairean was in mist when we reached it, but a view appeared just as we were about to leave. We came down on the west side of Allt Coire nan Clach. In spate, this burn would be better crossed higher up, as per WH route description.

9 6 14.gpx Open full screen  NB: Walkhighlands is not responsible for the accuracy of gpx files in users posts

This was my first venture into Coulin Forest, and a very impressive place it is. Although the weather was clear, care was needed in finding the path on the steep descent at NG 959 516. Looking back to Beinn Liath Mhor on the walk out: The fine weather held until shortly before the end of the walk, but the rain without wind didn't send the Achnashellach midges away. They couldn't spoil a superb day, though.

10 6 14.gpx Open full screen  NB: Walkhighlands is not responsible for the accuracy of gpx files in users posts

Jimmy and I had arranged to do the Brothers' ridge together, leaving a vehicle at either end, as we'd done in 2012 with the 5 Sisters.

View in retrospect of Saileag, backed by the 5 Sisters, en route to Sgurr a Bhealaich Dheirg: Jimmy suggested giving the Corbett, Am Bathach, a miss, and I agreed.

11 6 14.gpx Open full screen  NB: Walkhighlands is not responsible for the accuracy of gpx files in users posts

Another day walking with Jimmy, and these two Munros were lined up to be his 99th and 100th. The weather was a bit damp and misty at first, and A' Chralaig was in clag when we reached it. But a slight clearance of the clouds allowed something of a view.

Loch Cluanie from A' Chralaig: 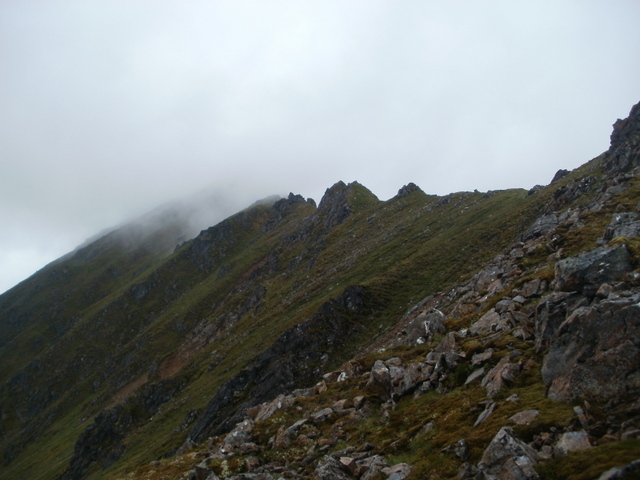 As with A' Chralaig, the Mullach was in and out of the mist, so we did get some views.

So, congratulations to Jimmy on bagging 100 Munros. After the walk, he drove back home to Alnwick. I returned to my B and B and looked at the WH 'meeting up' board on my phone. Fife Flyer was intending to do the two Loch Lochy Munros on Saturday 14th, the day I would be driving from Kintail to my next B and B in Spean Bridge. Strategically, it made sense to join him, so the arrangement was made. Martin (FF) and I were also to be accompanied by Karen (kmai1961).


12 6 14.gpx Open full screen  NB: Walkhighlands is not responsible for the accuracy of gpx files in users posts

My second visit to Coulin Forest, and the weather again allowed some superb views. An Ruadh-stac from just above Bealach a' Choire Ghairbh: On the descent from the Bealach, I stopped to talk to another walker who was ascending. With a look of alarm, he pointed towards my right hand. I hadn't felt it, but a great cleg had landed there; fortunately, I brushed it off before it could get its teeth in.

Friday 13th was a rather wet day in the west, so I had a rest and went to Inverness; the weather wasn't so bad there.

So that was the end of a superb week around Kintail, and I made ready to head to Spean Bridge via Loch Lochy.

Nice one Simon, what a busy little bee you were, looks like weather improved after that

We could have done with your superb knowledge on Sunday up Gulvain, as the 3 of us were hopeless not only at remembering hills but also pronouncing them

Jings - you certainly packed a lot into the first week

Weather looked not bad on the whole - glad it was good for Achnashellach area to get the views.
Think you deserved a day off on the Friday and am looking forwrad to week 2 - cheers

Thanks, Martin. I couldn't complain about the first week's weather anyway. Without the pronunciation and meaning button on this site, I'd be pretty clueless about the Gaelic names.

Cheers, RH, it was a stroke of luck to get clear weather around Achnashellach; those views must be some of the best in Scotland.

Thanks a lot, LH. Pity you couldn't make the Helvellyn trip in April. I'm sure there'll be future opportunities to get on the hills.