This is the second day of our wild camping weekend. We had gone to bed the preceding night fairly underwhelmed after our long trek out to the HTCC (Bidein a'Choire Sheasgaith) and Lurg Mhor. Day two was supposed to take in the two Sgurrs and Maoile Lunndaidh, another 18+km day, as we were walking back to the car and heading back to Falkirk.

However I wanted to get back home for the France-Honduras game, perhaps not for the start of the game, but at the very least the start of the second half. So national pride trumped the urge to bag the fifth Munro. Coincidentally, both Alan and I were also flying to London the next morning and, I don't know about him, but I certainly hadn't found the time to pack my overnight bag. So it made sense to have a shorter walking day.

So we settled for Plan B and decided to leave Maoile Lunndaidh out of our plans, our aspiration being to return in August with the bikes to bag it.

On Sunday we woke up to much clearer, drier air and a slight breeze, thus, thankfully, fewer midges. We set off just past 8am and headed for the Bealach Bearnais. It didn't take long for us to get into an easy stride up the path. Once we got to the Bealach, the pair of ptarmigans was waiting for us, Mr Ptarmigan strutting around with his red head gear. The way up to Bealach Bearnais We struck up the north western edge of Sgurr Choinnich, past another drystane dyke (what is the meaning of these? is this part of a stone management programme? if so, it's not finished!), and up the steep slopes. This is a very pleasant climb, involving very mild scrambling, and height is gained remarkably quickly. We were treated to fantastic and dramatic views of Cheesecake emerging slowly, head first, then shoulders and torso, from behind the flanks of Beinn Tharsuinn, Lurg Mhor and Loch Monar with the lodge tucked away in a copse of conifers on its southern shore. Sometimes when you're on the hill itself you fail to get a good grasp of the overall shape and scope of what you've accomplished. You of course discover the hill because it's under your feet (and in some cases your hands) but it's an intimate knowledge that lacks perspective. It's nice to spend a couple of days walking in the same area. It enables you to get that perspective, for so long as the weather will let you, obviously! Cheesecake in all its splendour Mist on the narrow ridge to the summit

As we reached the first summit, the mist came rolling in. It wasn't cold so we sat on the summit by the cairn to wait with hope in our hearts for the mist to roll out again. 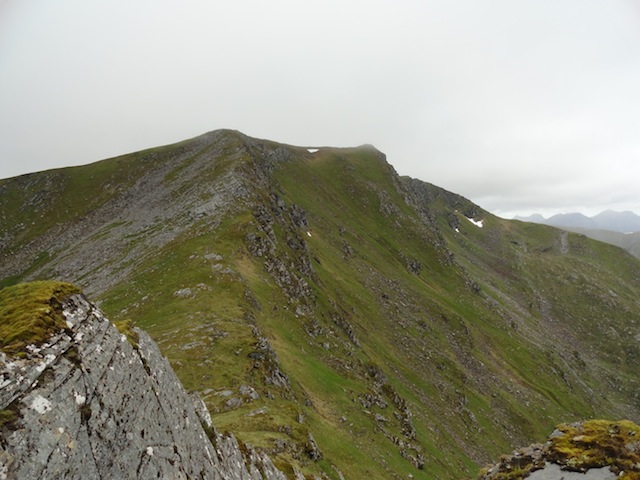 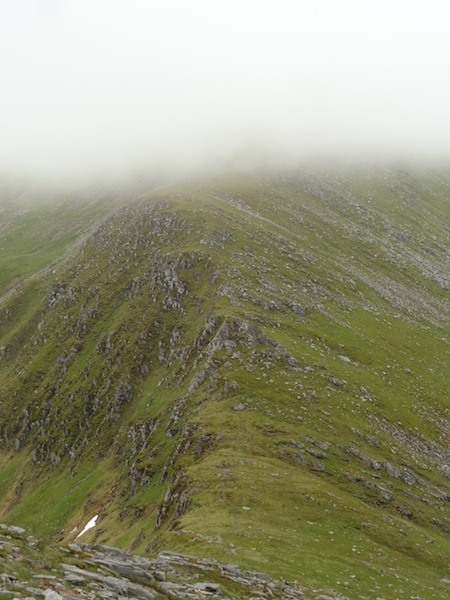 Col between Sgurr 1 and Sgurr 2

It didn't. So we set off for Sgurr a'Chaorachain. The way down to the col is obvious enough (straight down!) but the path appears to head right (ie south) until it swings left again towards the northern side of the broad but bouldery shoulder. As we ascended the broad grassy shoulder that leads to the flat summit, we walked into the cloud again but found the large stone circular shelter easily. We sat down for some lunch and proceeded to look at our maps, until suddenly Alan uttered 'look!': the mist had cleared and we were treated to beautiful but also dramatic views to Beinn Eighe, Leathach, Slioch, the Coulin hills, the Cuillin, Ladhar Bheinn, Loch Hourn, Loch Duich, Eigg, and to the south the Glen Affric hills! Clouds were still hooked to some summits and with the sun moving west, they kept the Coulin hills in shade making them appear ominous. It was chilly but I was dancing with excitement, and the improving weather kept us on the summit, snapping away at the hills, charting their emergence from the gloom of the clouds. Selfie, with hat and reading glasses Beinn Liath Mhor and Sgorr Ruadh (yet to be climbed) We also got a very good view of Maoile Lunndaidh and got the measure of what would have awaited us, had we stuck to Plan A: a long climb down and an even longer schlepp to the very flat and broad summit: a good 3 hours' walking. It was tempting but...

With a heavy heart we set off again, down the northern spur of the hill, looking for a passable way down very steep grassy slopes towards the track in the Pollan Buidhe. A young stag and 3 hinds watched me pick my way down these steep slopes. The grass is long and there are few footholds, so care must be taken not to slide as there would be little to stop a stumble. The effort of crunching your toes in sympathy is leavened somewhat by another beautiful show of wild flowers and as the floor of the Pollan Buidhe is reached you can unclench your toes! The last climb down, steeper than it looks north eastern side of Sgurr Choinnich We headed back to our campground, unpitched and repacked. By then the sun was out and out of the breeze in the shelter of the slopes surrounding the Allt a'Choinas, it was pleasantly warm. So we strode forth back to the main road. The hum of the generator which powers the construction of a hydro generator just before the gorge accompanied us. The voles didn't come out to greet us but the views over the hills on the northern side of the Achnashellach road kept us happy.

Back at the car, we didn't linger - the midges were upon us like....

The drive back to the A9 was very straightforward, nice and fast. Even the A9 was acceptable and at 8pm, we put the radio on. Just as we arrived at Alan's house, France scored their first goal. I made my excuses and left him to his family, drove the mile home, unpacked the car in less than 5 minutes and settled down to the next goal!

Hello. Just registered and catching up with reports. I obviously liked your report and thanks for missing out the bit about how long I took to get down the slope with one knackered trekking pole and broken body! Alan