The rain is teeming down outside my study window and the garden is returning to its normal quagmire status. As a result I have time to catch up on a handful of trip reports; not least of which is one to mark the latest opportunity I have had to share a Dad & Daughter Munro on her recent visit north.

And so it was, we stood at Altnafeadh glaring over at a shrouded mass of grey under which huddled The Buchaille like a teenager in a hoodie showing every sign of being allergic to mornings: the mountain that is, not my daughter.

Encouraged by Dad’s enthusiastic optimism, which she accepts is based on experience and no longer a devious parental ruse, she led off across the river and up towards Coire na Tulaich.

“There’s snow up there.”
“Yes,” I said, “that’s why we’re here and not doing Sgreamhach from the Lost Valley.”
“It’ll be fine. I’ve seen a recent photo on Walkhighlands" I added. She’s a convert to the site, so she believed me and continued on upwards into the mists.

It was curiously silent, just the scrunch of our own footsteps. The last time I’d been up here stones had rattled, ricocheted and echoed in the increasingly enclosed surroundings. If they’d done so today it would have been a spookily eerie place to be. As it was, just plodding up into the greyness had its own mystic qualities. Soon the previously spotted snow patch was below us and bigger patches on either side drifted in and out of view.

Any worries about snow making life difficult getting onto the bealach were dispelled when we suddenly arrived after scrambling up a short rocky rib. But, with little or nothing to see but each other, we soon pressed on up the final slopes to the top. “Keep going,” I said as we arrived at the first of the large cairns. “We’re not quite there yet.” There was no way I’d let her put all this effort in to discover on another day that she hadn’t topped out on the right summit.

We hung around, as you do: looking at grey. Looking up and imagining it’s getting that little bit brighter. Listening to the rattle of gear and adrenalin- powered whoops as a couple of guys finished a route on the cliffs somewhere below. Yes, it is the top: honest. But you might want to put something a little warmer on. Dad, stop fussing.

We waited a bit more, as you do: having something else to eat and me describing the panorama that surrounded us. As another group began to materialise out of the mist we decided that this wasn’t really doing it for us so we might as well move on. 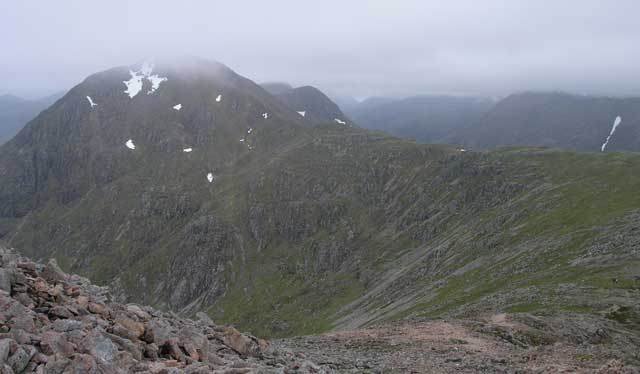 And of course it wasn’t long before the road in Etive could be seen, and then movement along what should be the line of the A82. By the time we were back at the bealach the day was opening up before our eyes. It also revealed fifteen or twenty youngsters, most of whom seemed to be thrashing their arms as if trying to fly back to wherever they’d come from. When we got closer, we realised that the handful that were stationary benefitted from midge nets and sat perched on rocks trying to put a sandwich into their mouths without letting to many of the beasties in.

“I’d eat that quickly,” I said. “They make short work of a sandwich if it’s left out too long.”
“Dad,” she exclaimed.

I really admired the school staff up there with them. It must have been quite a job herding them all up the final steepening headwall of that corrie, never mind getting them all down as well. I hope their efforts have sparked a flame in some of the kids that will burn on in the future. It was one such teacher that started it all off for me. The way ahead -from Stob na Doire

With the conditions now much improved we pressed on to enjoy the rest of the snaking ridge to the other end. We don’t need to dwell on how spectacular it is, with so many reports and photographs on the site already. Suffice to say, the prospect down Glen Etive and further south from Ston na Broige was well worth repeating and may well be in years to come as well.

Bidean pops in and out as the clouds drift by Down beyond the troublesome snow patch to the Lairig Gartain

Before descending into Coire Altruim and the Lairig Gartain there was one more spell of entertainment to enjoy. Where the path from the bealach begins to zig-zag its way steeply down, a patch of snow still blocked progress. Some scrambled down the rocks to one side, while others traversed in from the screes on the other: nobody attempted the snow. Some found it easy, some difficult and some appeared to be lambasting their partners for taking them on such a stupid diversion. We simply watched and learned: then made our own completely different way past the difficulty. Whether I too was being maligned behind my back or cursed silently I don’t know. There were no oaths, no scuttling of scree and she was still in one piece when we got down so I drew my own conclusions: and kept schtumm.

The seemingly cushioned path along the Lairig Gartain is a pleasant way to finish the day and eases any jarred knees that may be starting to suffer. The constructors are to be congratulated. Typically clear at the end of the day

And of course when we got back to the car, The Buchaille stood in all its glory.

Re: A Brightening Buchaille

The joys of children, don't we just love them, parents know better - end of