Chippy Chonzie - and a missed opportunity

Chippy Chonzie - and a missed opportunity


There are days in the hills when you are just taken by surprise; days when you realise that it’s foolish to take them for granted or make those hasty assumptions.

I hadn’t held out much hope for this trip. It was one of those stubborn singles that I needed to visit. I’d read too many tales of the trudges up from Glen Lednock so the approach from that side didn’t appeal. Glen Turret seemed to offer more, and there was also the opportunity to take advantage of the track alongside the reservoir to use the bike. Save time, a quicker day, and get back early for Uruguay game.

Well there was the first mistake. So far this year my trips to avoid the tension of a desperate game have resulted in abject failure – and latterly relegation.

Anyway, brimming with enthusiasm I over-shot the turning to the reservoir in Hosh and it wasn’t until I passed the dilapidated gates of Monzie Castle that I realised I was heading off in the wrong direction.

Good start this; it can only get better.

A bright start at the Loch Turret dam

Finally, after trying preserve the springs in my car with swerves to avoid the potholes in the “road”, I joined the other cars in the car park at the reservoir. With the bike out I was raring to go.

Loch Turret stretches away with Ben Chonzie in the distance

At this point I decided to look at the map for the first time and noticed that the track didn’t exactly hug the shoreline as I’d hoped. Now my bike ain’t really what you’d call a mountain bike. It’s more of a hybrid “townie”. Chunky tyres, springs: no. OK, it’s got gears, and plenty of them, but it all became rather fragile and when the chain popped off for a second time I was beginning to lose any grasp I had on patience. 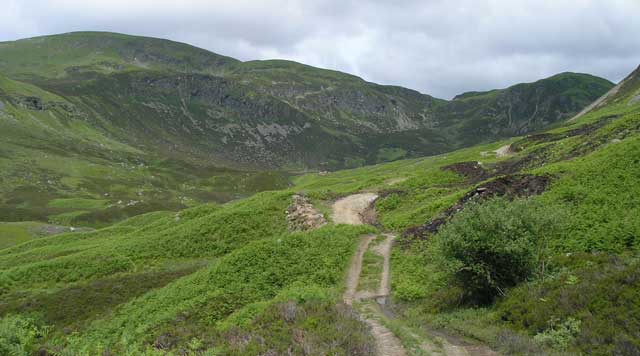 But the view ahead, which I hadn’t expected, encouraged me on. For half an hour I persisted when, getting level with the head of the loch, I ditched the bike far enough away from a cattle feeder to avoid damage to either the bike or them, but close enough for me to identify it from distance.

The crags below the summit of Ben Chonzie give it plenty of character and the corrie holding Lochan Uaine is impressive without being unduly intimidating. The route up to the bealach at the foot of the north east ridge, while not entirely obvious from a distance, is nicely clear close up. 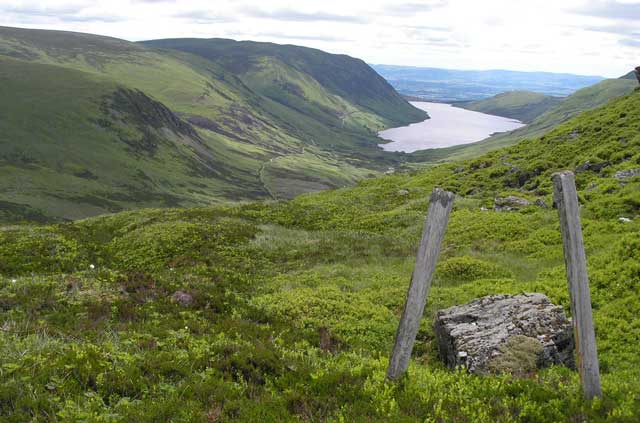 Notwithstanding the unexpected ups and downs for a non-mountain biker, this final pull up to the bealach proved to be the most strenuous part of the day – and was over easily in well under an hour. After that, it’s one of those days when you can simply follow the fence posts and try not to trip over your feet while admiring the views to the north. In just under two hours I was strolling across the final stretch of the summit, ready to enjoy a lengthy rest in the shelter and soak up the view. For some reason I’d convinced myself that the hill would be busy on such a good day. In reality, I’d been on the top for over half an hour before anyone else arrived as I was about to move on. I’d worked out the views and the panorama, the hills still to do and those recently visited.

Critically, I’d also worked out the best end to the day.

Sadly, it wouldn’t involve going back to where my bike had been left. Now one part of me just wanted to leave it there. Continuing the high-level walk along to Beinn Liath was the logical and all too attractive next stage, descending to the dam at the other end of the reservoir. 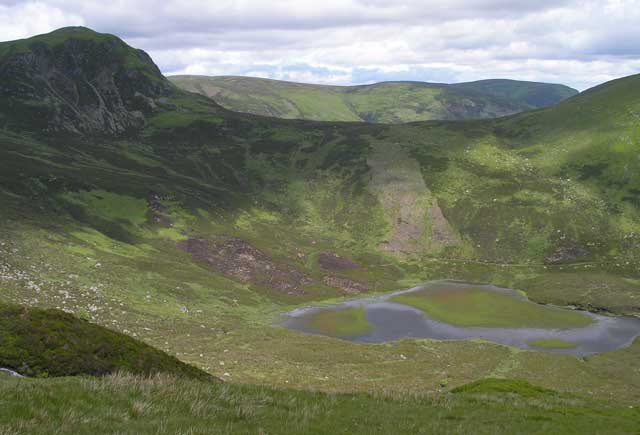 Down into Creag an Lochain Uaine - the bike's down there somewhere even though the best route is off to the right and well out of shot!

But, it would have meant walking all the way back up for my bike, then repeating the ride. So east, down the easy open slopes I went, aiming for a point where the Turret Burn wouldn’t be too wide to cross without a paddle.

Back at the bike I found a patch of grass, leaned back against my sac to enjoy the view down the glen and the drumlin fields – and woke up an hour later. 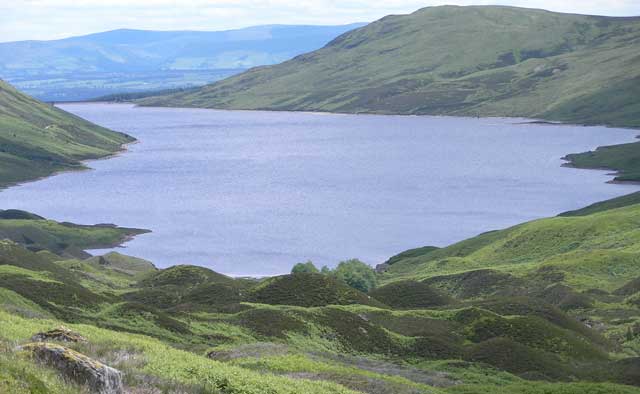 A geography teacher's dream? The backdrop to more than just a doze.

The cycle back proved to be shorter and easier. But across to the right, all the way along, I was trailed by that ridge on the opposite side: rubbing it in that I’d really missed an opportunity this time.

Maybe there will be a next time for this one. Get up an hour earlier, and take in the whole circuit around Loch Turret.

Now there’s a plan, and somewhere I feel guilty for maligning Ben Chonzie in my mind without actually going there.

The road up to the Turret dam has deteriorated badly over the last few years, makes for a slow journey. As for the track along the loch it's fairly up and down and probably harder work to cycle.

Good to see somebody being positive about this hill. I've done it from Glen Lednock and Glen Turret. Much preferred the latter heading up the track beside the loch and coming back on the other side and along the top of the dam made for a good few hours out in the hills.

How to make an uninteresting hill interesting - add a bike, good weather & a bit of humour

I know what you mean about cycling, riding over rough terrain isn't any fun, my tyres always look like they need more air in them as every little stone feels like a huge boulder

I did it from Glen Lednock and after climbing Auchnafree Hill a few weeks ago, I wished I had did it from the Turret dam. I agree about the walk on the other side of the loch as it looks like a cracker. I'll just need to go back!

Looks like you got a better day for views than I did a few weeks ago. I think Loch Turret is a lovely area and often enjoy just walking along the right hand side a bit and then turning back.