) we opted for an early start today before our drive back to Glasgow.

Tent and kit all packed up from our lochside camp, with not a trace left behind (can’t say the same for the remnants left by the fishing fraternity, tin lids, half burned beer box, black pudding skin etc..why? just take the junk home guys, you carried it here in the first place!!

The car park at the Loch end looks to have been extended fairly recently with comfortable parking for 10-12 cars. Several in place when we arrived, some since yesterday. Parked up and headed off round the gate at 6:20am

The track is good underfoot, rising and falling like a roller coaster. 2 paths are signposted off to the hillside on the right, one to Tomdoun, can't remember the other one

. Pass these and follow round until you get to the fork with the old worn Glendessary Lodge sign where you take the right fork up the hill. About 25 mins from the car, we were approaching Glendessary Farm, with machinery already started up, think there’s some kind of timber work going on, mill or otherwise. Using the large bend in the River Dessary to our left we were able to find the start of the walk. Up through a gate on a rough and rocky track alongside Allt na Feithe. Heading up from Glendessary Farm There is evidence of ponies using this track as plenty of hoof prints on the way up. Straight up at first with a few zig zags and bends nearer the top. Views back down to the Farm and Glendessary Lodge

As the slope eases, the hills of Sgurr Mor and Sgurr an Fhurain come in to view ahead, looking VERY steep and at this point, with both their heads in the clouds. Continuing through the glen floor, very flat with the river winding its way across we followed a pretty clear track which dipped and rose between the peat hags and rocky outcrops, much flatter than we had anticipated though. Also areas that would normally be very boggy had dried up considerably with a spongy peaty texture on much of the ground we covered. Getting further North as we started to dip down into Glen Kingie, we discussed the Corbett and decided to just go for Sgurr Mor. The WH route takes you straight over the river, up the steep front to Braigh a Choire Bhuidhe, which allows easier access to Fhuarain. Our choice was to keep left, crossing the river at a very large boulder with some cracking wee waterfalls, no problems with water levels. The top of Mor remained under cloud for most of the time, but we occasionally caught a glimpse of the skyline, knowing the summit was somewhere behind it. 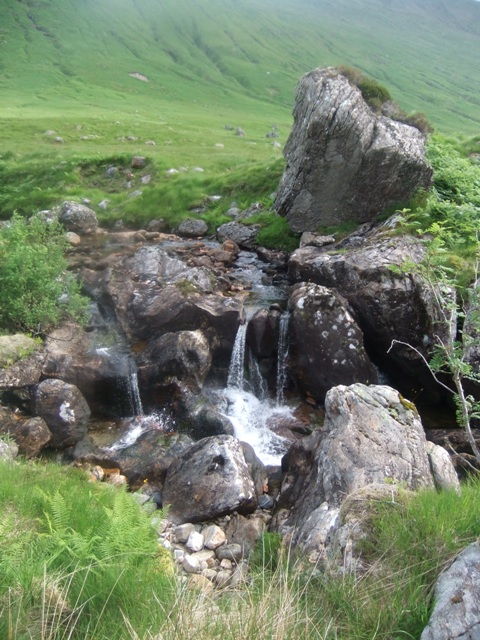 Suns out, those waterfalls were about 10ft high,,look tiny in the pic.

The hill up from here was pretty steep, boggy in places and at a little before 9am, very warm as the sun had come out from behind the clouds, so a few drink stops were necessary. Crossing one of the many streams here, we had a rest beside a fantastic wee river, cascading down over many rocks, channels etc. Looked very inviting in the heat. Slab course for the cool waters John heading up, Sgurr Mor just visible (under cloud) on the right First time the top cleared, and possibly the last too

Climbing up the steepening face, there were 2 small bealachs on the Western side of the Summit and with no drop, we took this over the long stretch to the East and up to Braigh a Choire Bhuidhe Up to the rocky ascent

I took the slightly steeper right hand route and John ended up slightly off to the left both meeting up under Cadha Riabhach. Wee break here for a bite to eat and a drink before following the clearly defined path round the rocks and heading up to the summit. Back down to Loch Arkaig

The path covers a lot of distance as it winds its way round the hillside. No problems though but the cloud was now swirling around us so a view from the top was looking doubtful. Got a bit windy here too and we had a spit of rain, so jackets were on for a bit.

As I picked my way up through the last of the boulders, John had headed off into the mist but pretty soon, I saw the hive shaped cairn and John approaching it through the now heavy low cloud. Minute or two more and Munro #93, at 1003 mtrs, Done! Think we were about 4hrs from the car at this point. A bit more to eat, few pics, as is the law, and off we went. Munro #93 with lots of low cloud

An uneventful descent, saw 1 bird off in the distance, probably a raven but no other signs of wildlife in the air and only a couple of frogs on the ground. (where have all the animals gone?) We retraced our route up but this time crossed the river further West than on the ascent and cut up and over the Allt a Ghuibhais burn, where John stopped for 5 mins to build a dam! It worked, I'm sure the water level in the pool behind it rose by an inch or two lol John disappearing into the bracken on the descent.

Crossing over, carried on back up to the flat glen of Feith a Chicheanais we struggled to find any sign of the track but your pretty much just following the valley floor south with the crags of Druim a Chuirn above us on the right. You find the odd series of footprints, going in both directions, and back to some hoof prints too. There are wooden posts at intervals, covered in nails which I assumed were possibly for mink hunters to hang up their catch and indeed on one of the last ones, we saw a matted mass of fur/hair etc on one of the nails. Yuk!

As we got to the last flat section, the ground to the West of the burn was particularly boggy so we stuck to the banks and onto a pebbly wee island at one point before the valley narrows and the waterfalls begin, showing the start of the descent proper.

This section again has lovely rock formations in the river, which was pretty low.

Back on to the track down to the farm, with the machinery still buzzing away. Another small shower of rain here, hood up, sunnies off but for hardly any time as the sun was out again. Heading back down to the farm, clouds mustering

We got to the track at 1pm, poles away and sauntered off. Couple of small planes came round from the East, heading into dark dark clouds now building to the West, before one banked round and passed over us again. Getting nearer Loch Arkaig, the weather front moving in from the West looked a bit nasty, low cloud down in the valleys around Sgurr Thuilm. Mission! And we chose to accept it, get to the car before that weather does! Lets bolt for the car before that lot lands on us!!!

Sure enough,,minutes after our arrival and de-booting, rain came on but for what had been a clammy day,,with some cloud around and a wee burst of hot sun in the morning, could have been a lot worse.

At a little over 7hrs for this hill, I was more than happy. I still have the 3 to the West to do, so will hopefully be back soon. (might do a solo trip and confront my demons, on a good day of course)

I managed to bring home a souvenir,,not the normal rock,,but a tick, removed and no after effects, night time loo stops in the bracken are probably to blame, stay safe out there folks

I can join you in the tick gang - 1st one ever a couple of weeks ago.

Maybe I over reacted but went to the Doc's, she was great, as she said "I have dogs so am always taking these things out".

Gordie12 wrote:I can join you in the tick gang - 1st one ever a couple of weeks ago.

Maybe I over reacted but went to the Doc's, she was great, as she said "I have dogs so am always taking these things out".

my eyesights that bad,,and it was awkwardly placed,,,so I wasn't sure,,i just squeezed it out and stuck it on to a piece of sellotape so I could have a proper look,,still very small but thankfully seemed to get it all out. antiseptic cream for a few days and the bumps all gone now phew!

Good report on a nice-looking hill, Gill. Now you have to tell us the 'long story'!!!!

AnnieMacD wrote:Good report on a nice-looking hill, Gill. Now you have to tell us the 'long story'!!!!

Oh I couldnt POSSIBLY mention the missing out on 3 hills the previous day,,after taking (i dont say cycling,,as very little cycling took place) a bike over something resembling the Somme battlefield, bog, rivers etc for an hour and a half, ,,just to save half an hours walking, I certainly wont mention getting myself so worked up and angry at wasting so much precious energy before I'd even started to climb a hill, that the shutters came down and no matter what I told myself,,the head was just not willing, now Annie,,you wouldnt want me to tell you all that, would you?

Apologies to John for my petulant child impressions, followed by gentle sobbing when left on a rock, half way up the first Munro, on my own, contemplating my belly button

oh dear Gill ..I'm so glad you let us in on what happened the day before ..i totally sympathise ...bless you ...well done you .. managing to pick yourself up and get back on the hills the following day

..dam those pesky hills! ..and if we're counting ticks ..ive had 4 this year so far ..took 2 out this morning

Early start was good, think you were still asleep, heading back to Somme field,

We'll done you two. I know who to call when I need a tick removing.