strathfarrar 4 actual.gpx Open full screen  NB: Walkhighlands is not responsible for the accuracy of gpx files in users posts

Took 7:30 for the hills including a cycle along the private road BUT...I cheated

- met someone who had a car key mix up so I drove their car the last 7km along the road to get to my bike, real time would have been 9hrs ish.

Camped at Cannich campsite & planned to get up around 4am, but the cheap & comfy Argos airbed deflated during the night (on its 3rd outing) so woke up around 2, reinflated it and tried to doze off again. Alarm went off at 4 so I got up & attempted to pack up the tent, 5 secs later my head was crawling with midges so I ran off to the car for some Smidge. Drove up to Strathfarrar gate, got on bike & left just after 5am.

Lovely tarmac road for 12.5 km, there are a few hills but a lot of flat where it goes alongside the river & loch. Took 45mins to cycle in, there's more descent on the return so it's easier, but there was a head wind by that time so I ended up taking about 45mins on the way back too. 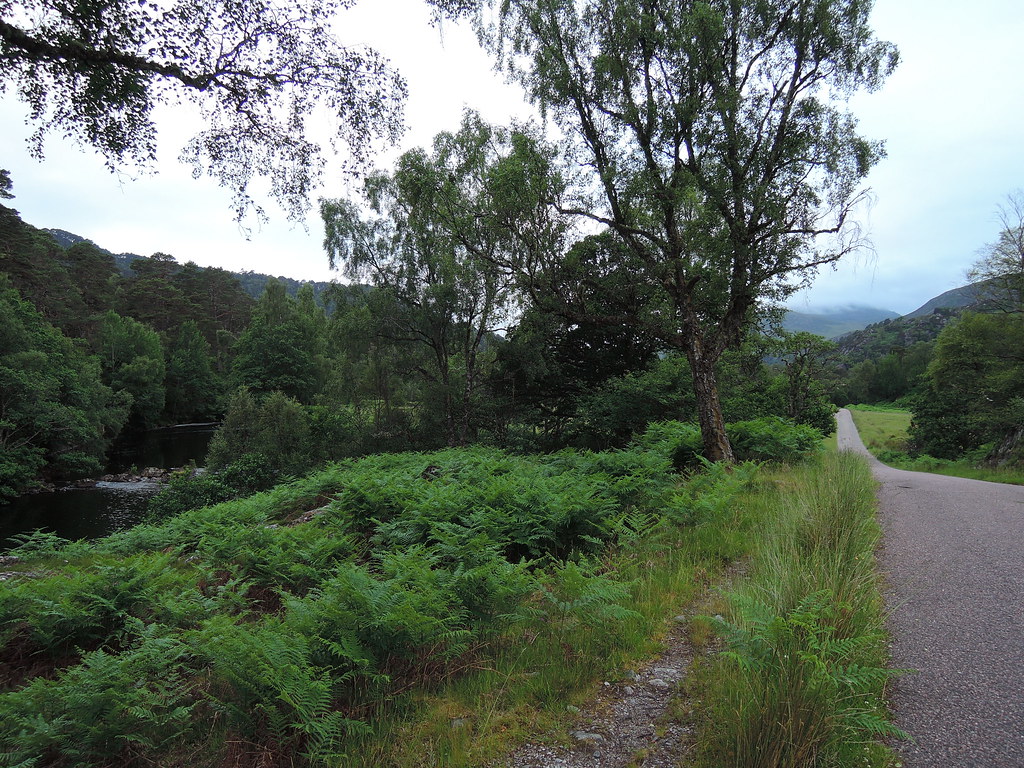 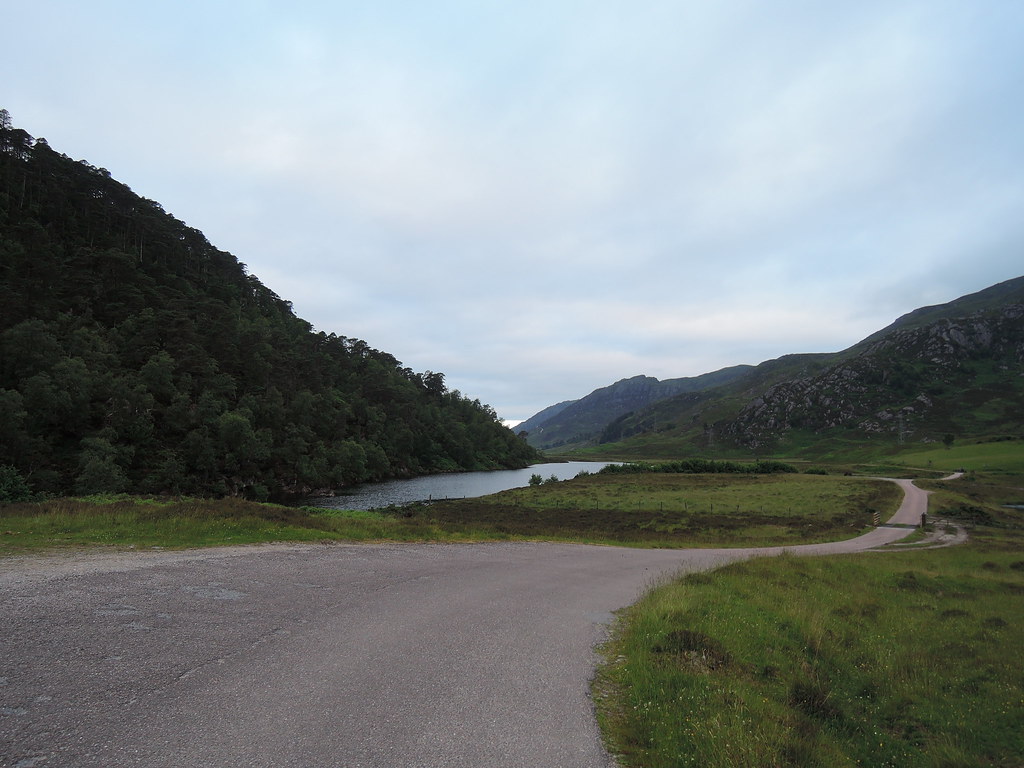 Start of walk is just after Deanie power station. 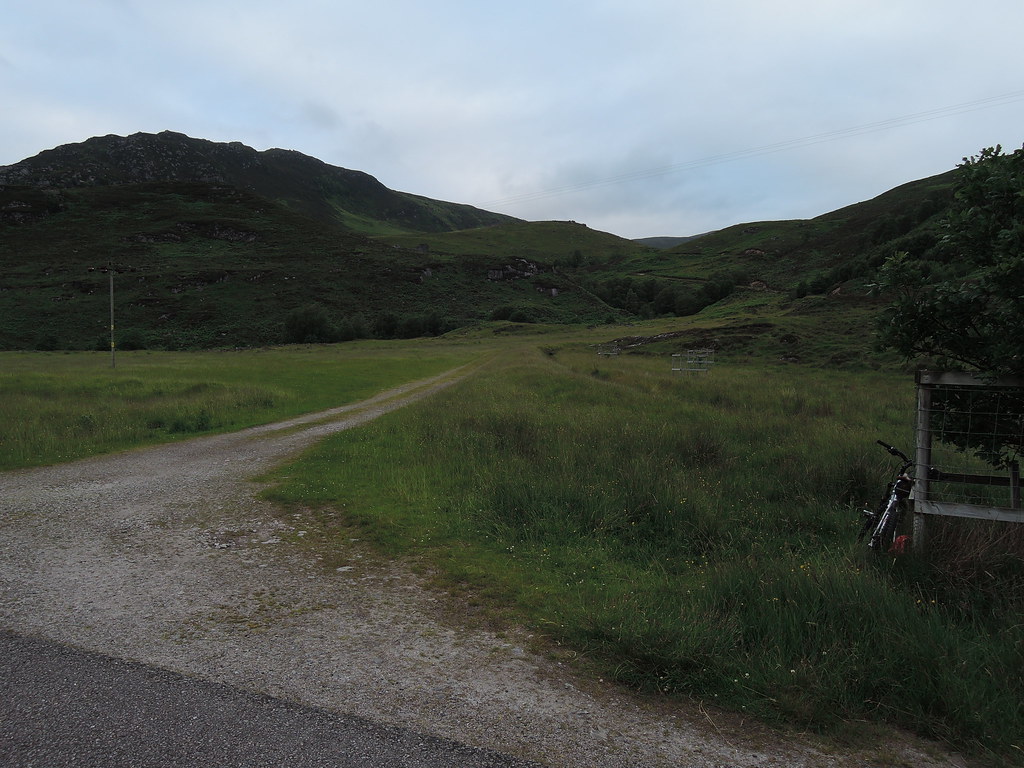 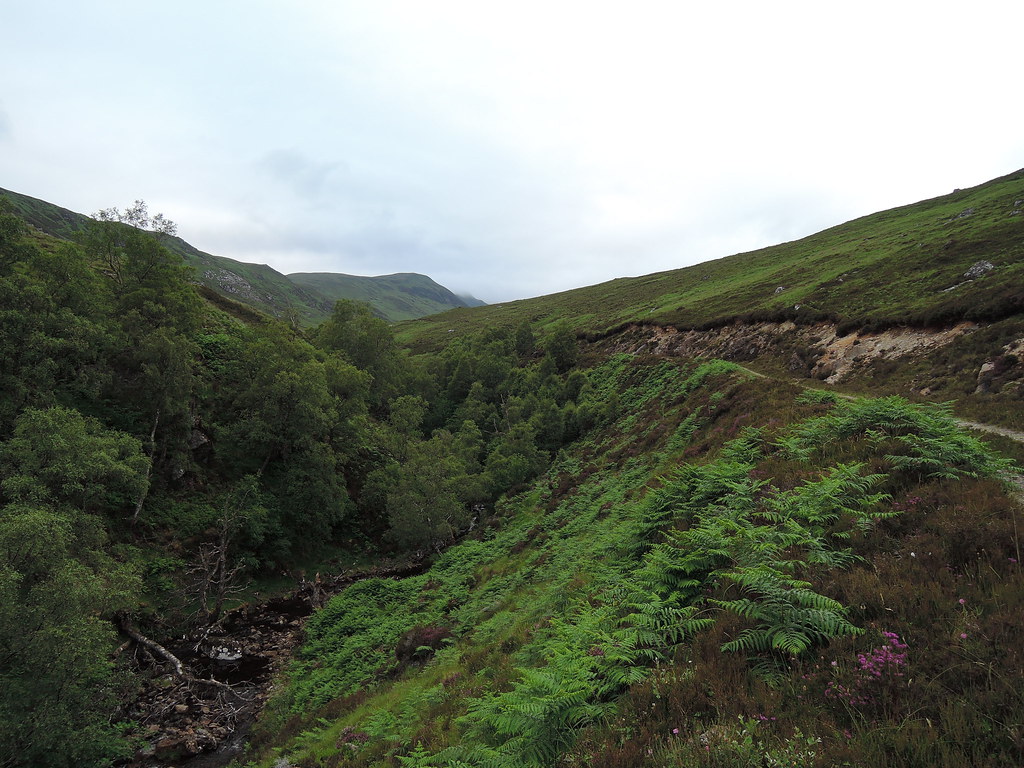 Beyond the dam it becomes a path which is boggy in places (descent route is much better though). 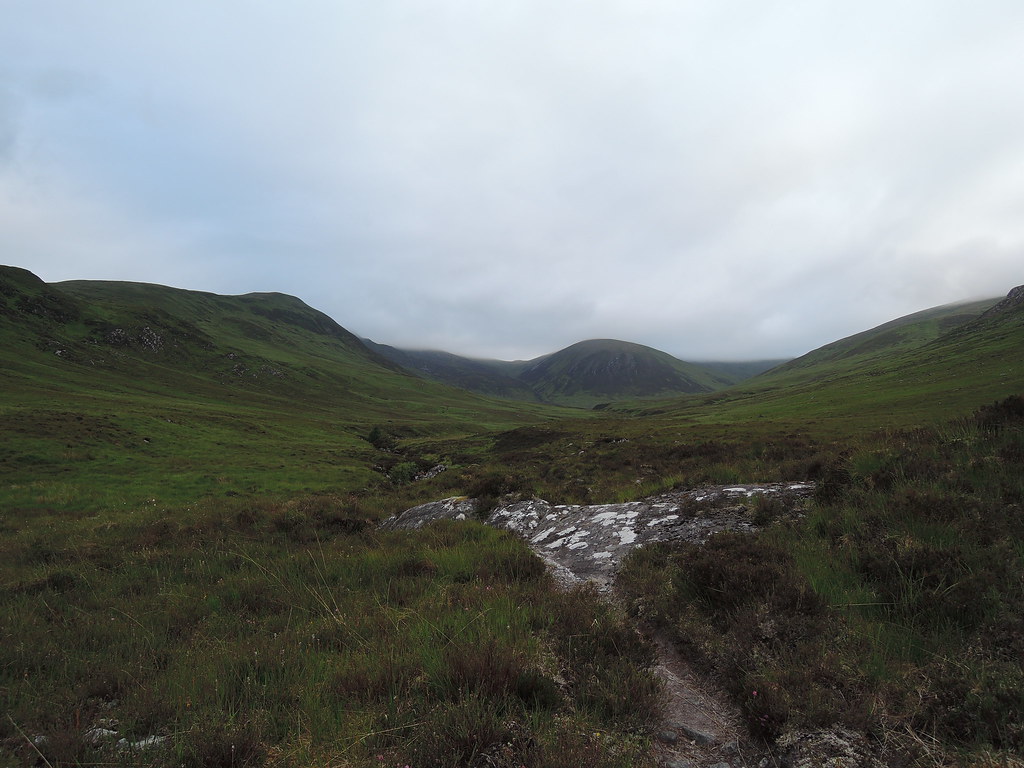 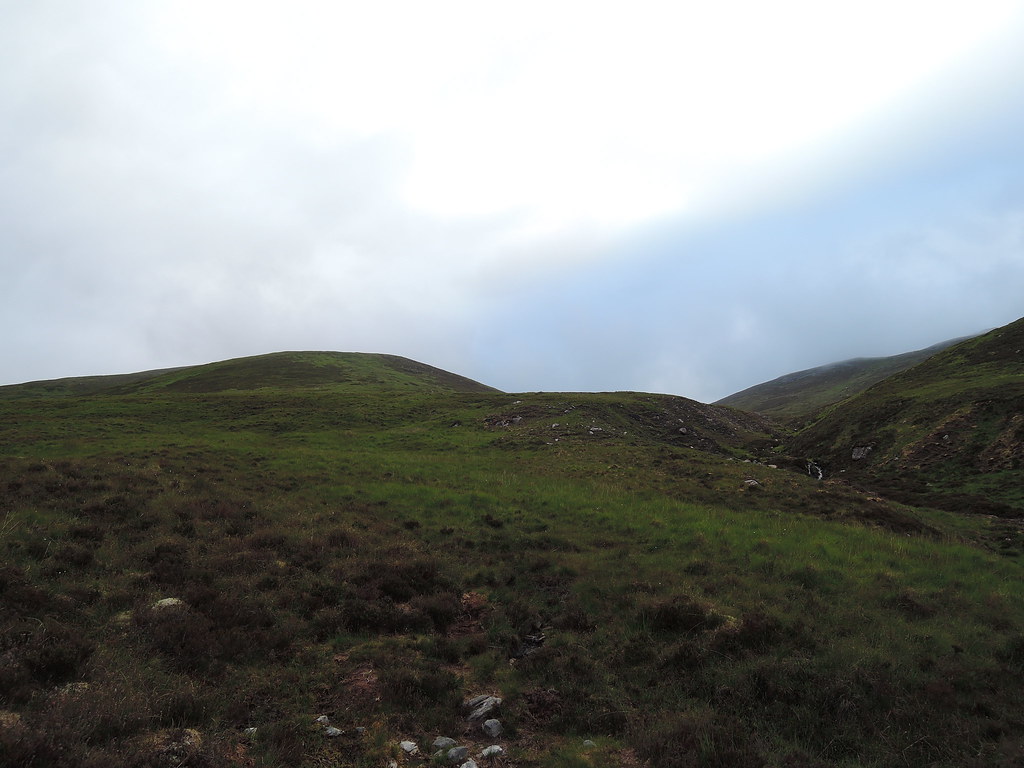 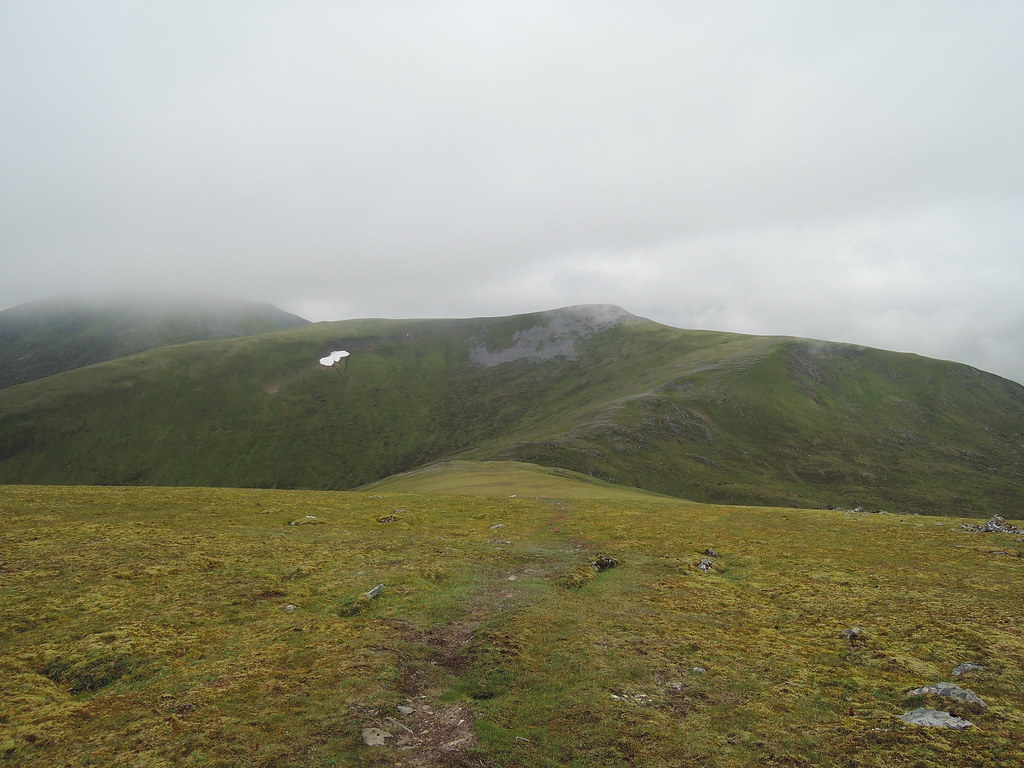 Boulder fields at the tops of the next 2 Munros, Sgurr a' Choire Ghlais from Carn nan Gobhar: 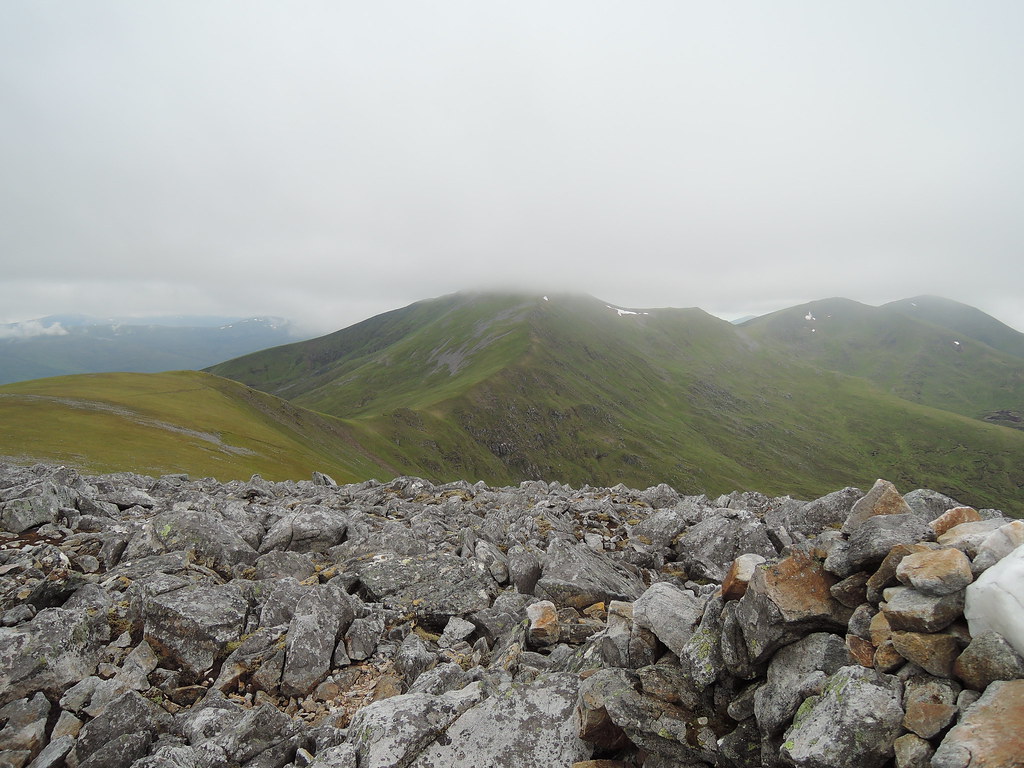 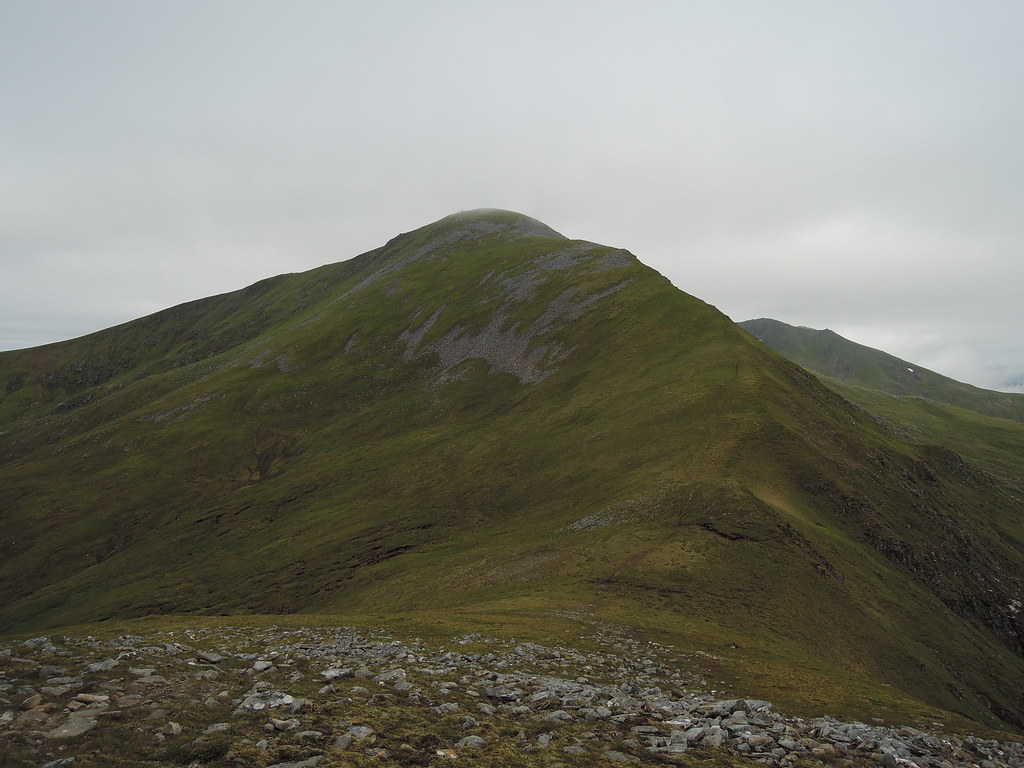 2 cairns & a trig point on Sgurr a' Choire Ghlais, steep boulders on the descent. 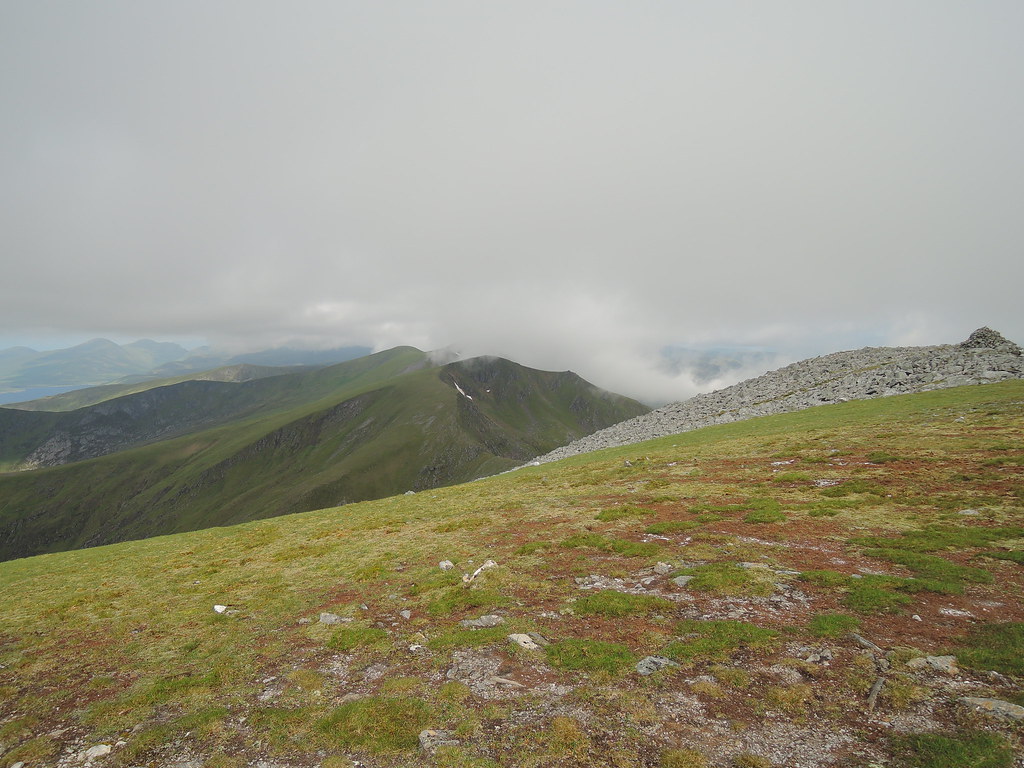 I was becoming a hill fog expert, noticing it blowing in from the north then sticking to the summits as it hit the clear air coming up from Glen Strathfarrar. View onwards from top of Sgurr a' Choire Ghlais: 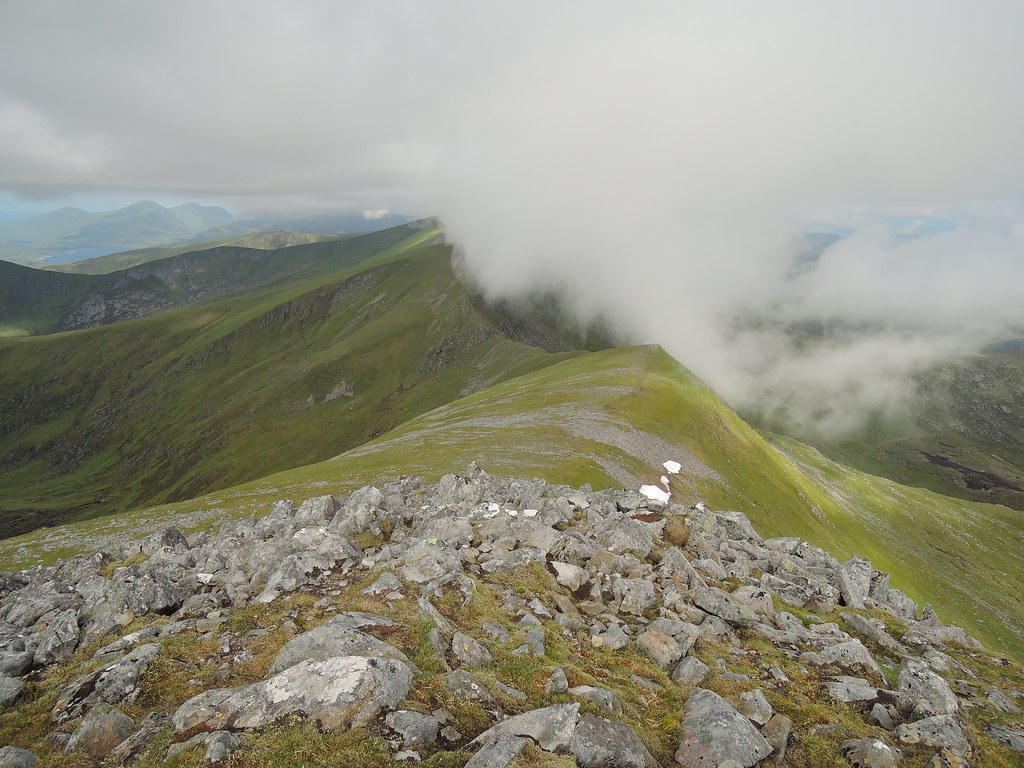 Back to the boulder field descent from Sgurr a' Choire Ghlais: 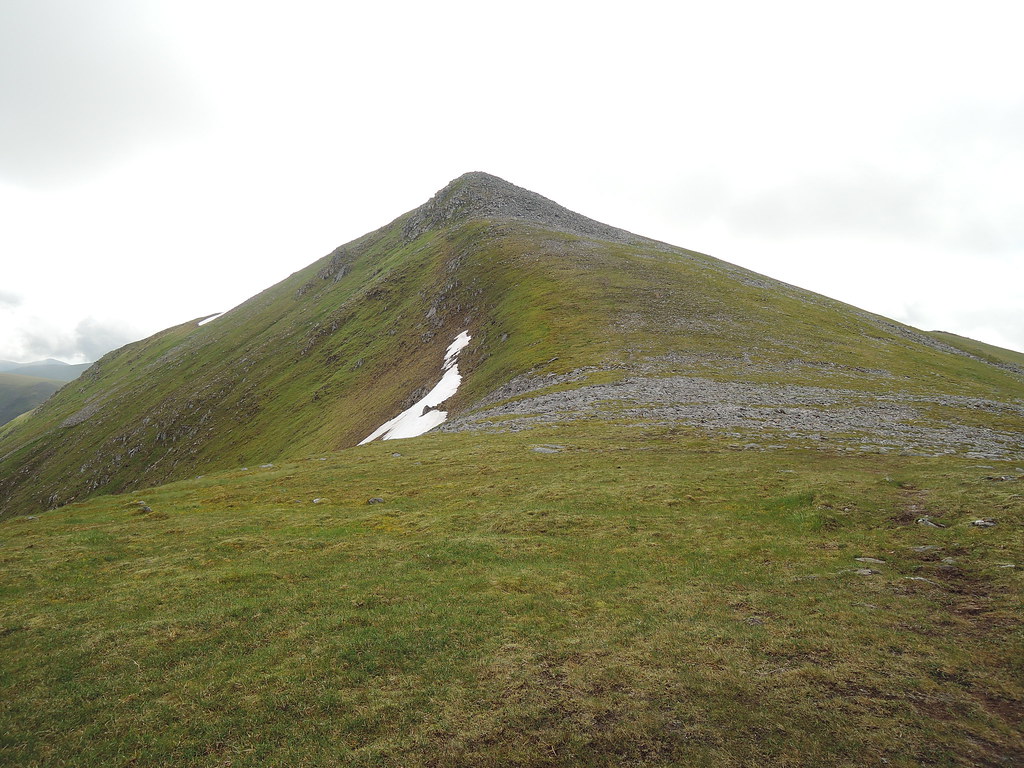 Next hill is Creag Ghorm a'Bhealaich, cloud was lifting as I got there, back to Sgurr a' Choire Ghlais: 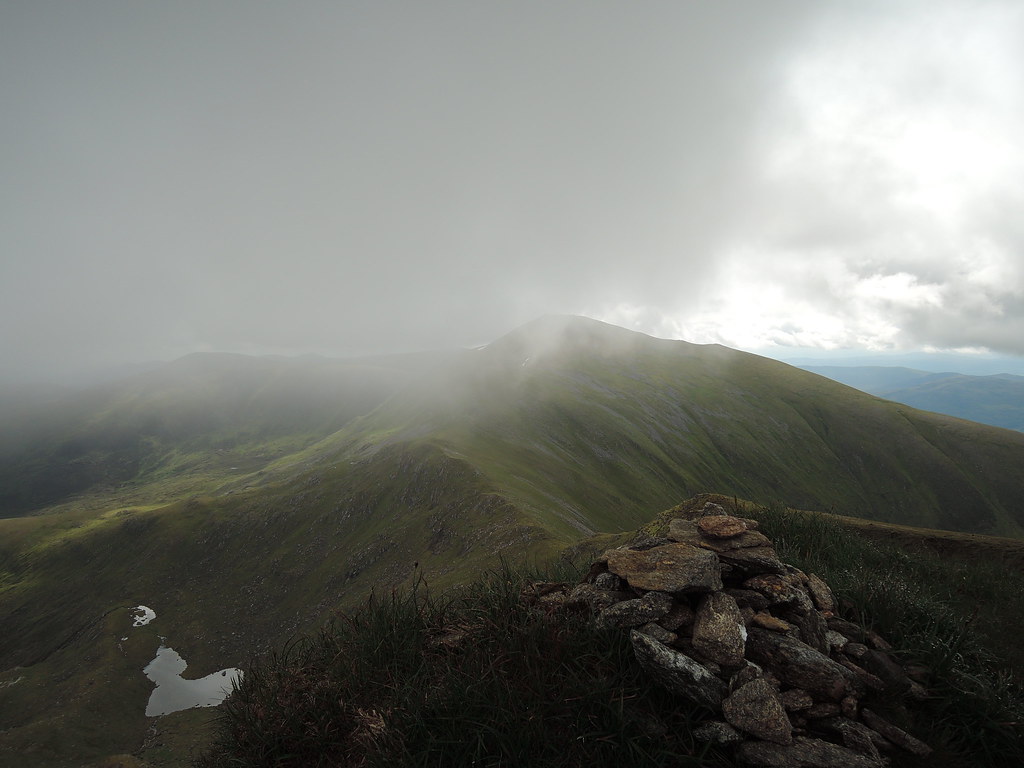 Nice, clear hills to the south: 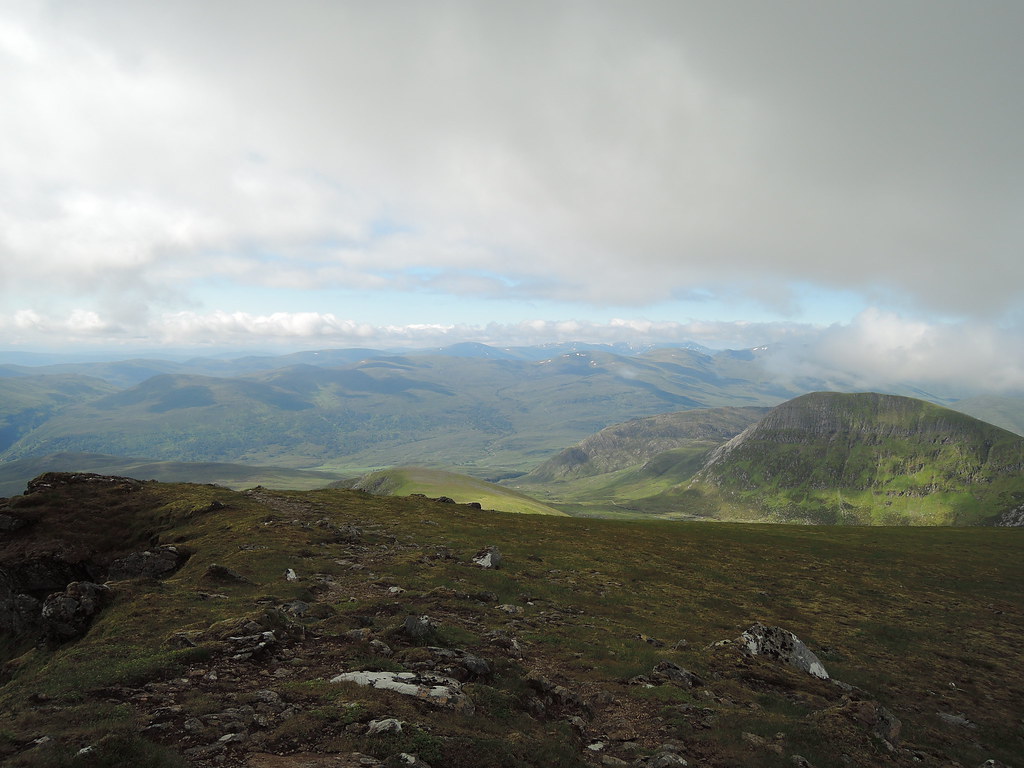 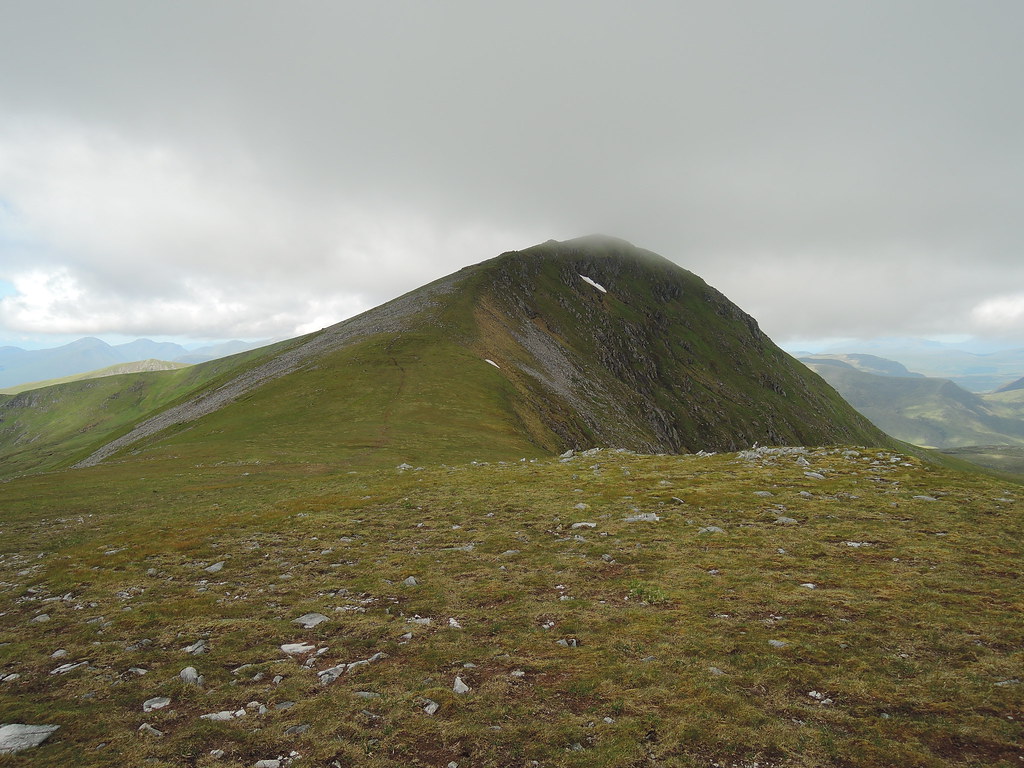 Looking back to the ridge - Creag Ghorm a'Bhealaich, then Sgurr a' Choire Ghlais (the big one) with Carn nan Gobhar to its left. 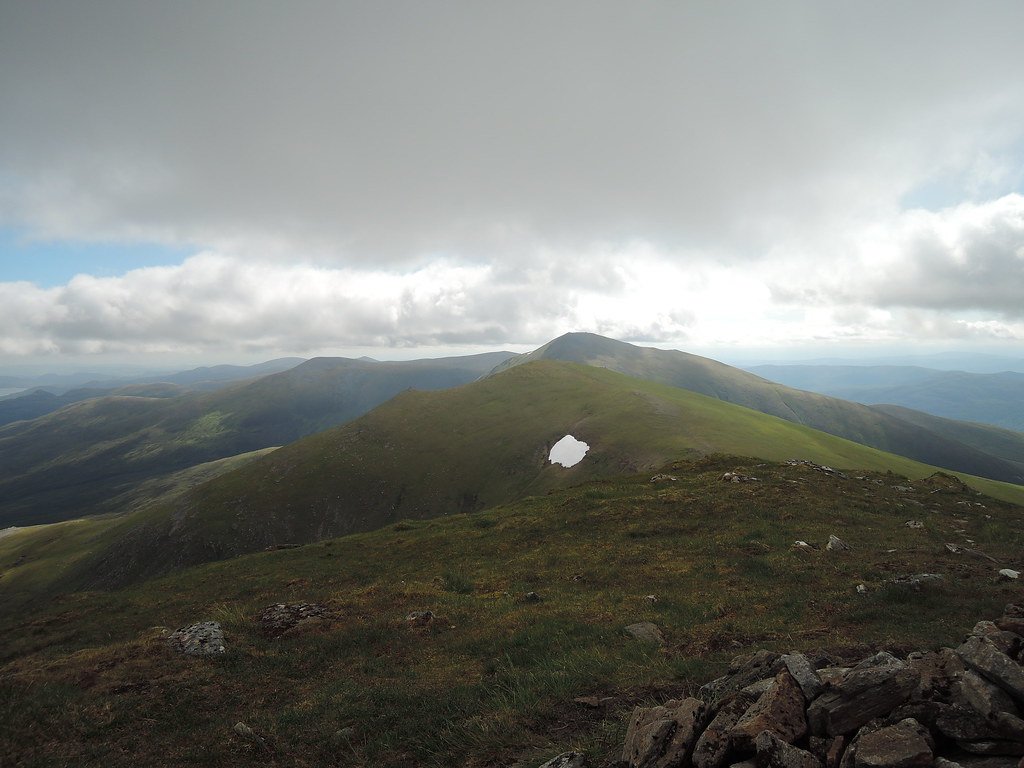 Finally some views to the north, towards Orrin reservoir: 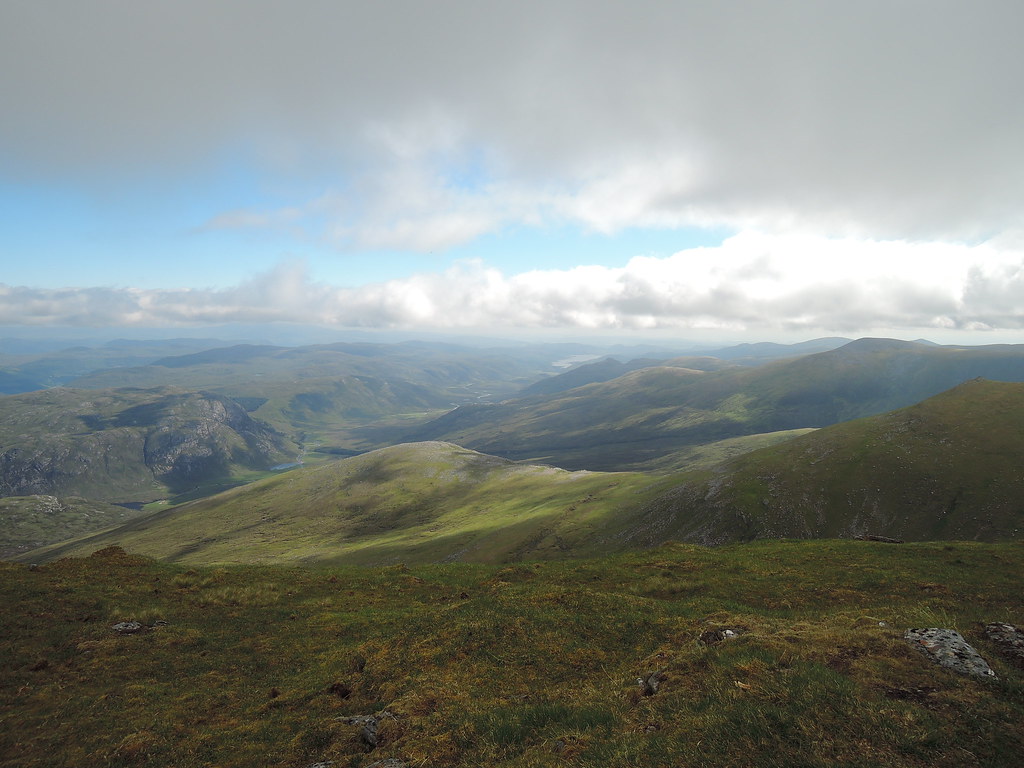 Descent from Sgurr Fhuar-thuill to the west & a bit of Loch Monar: 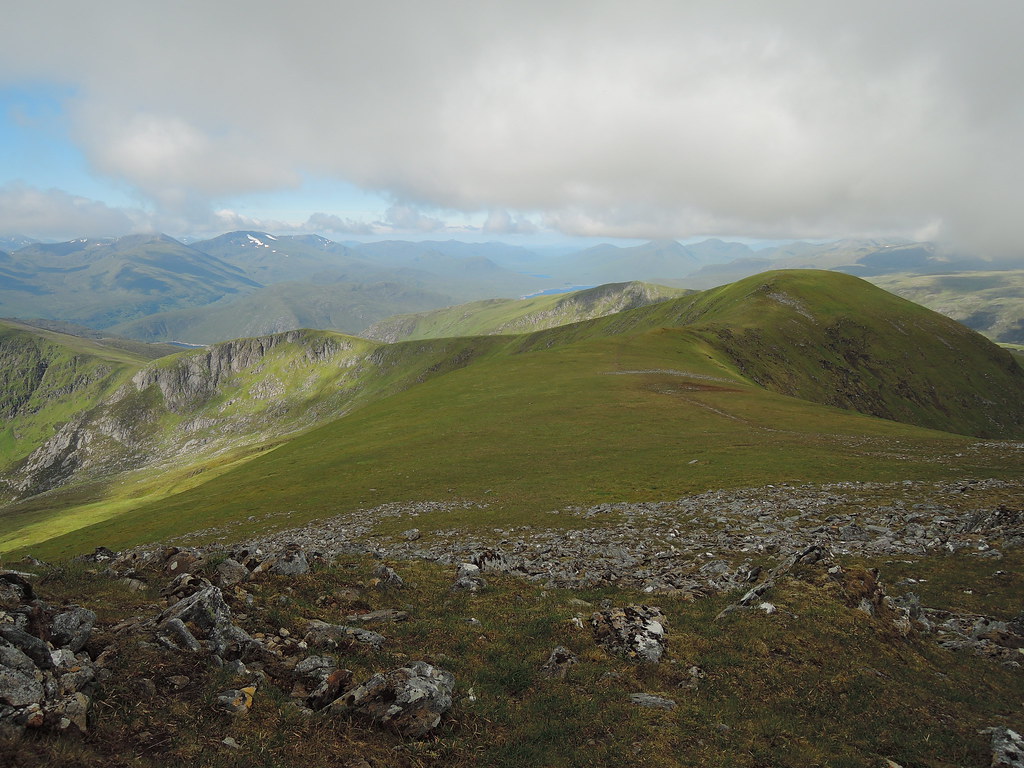 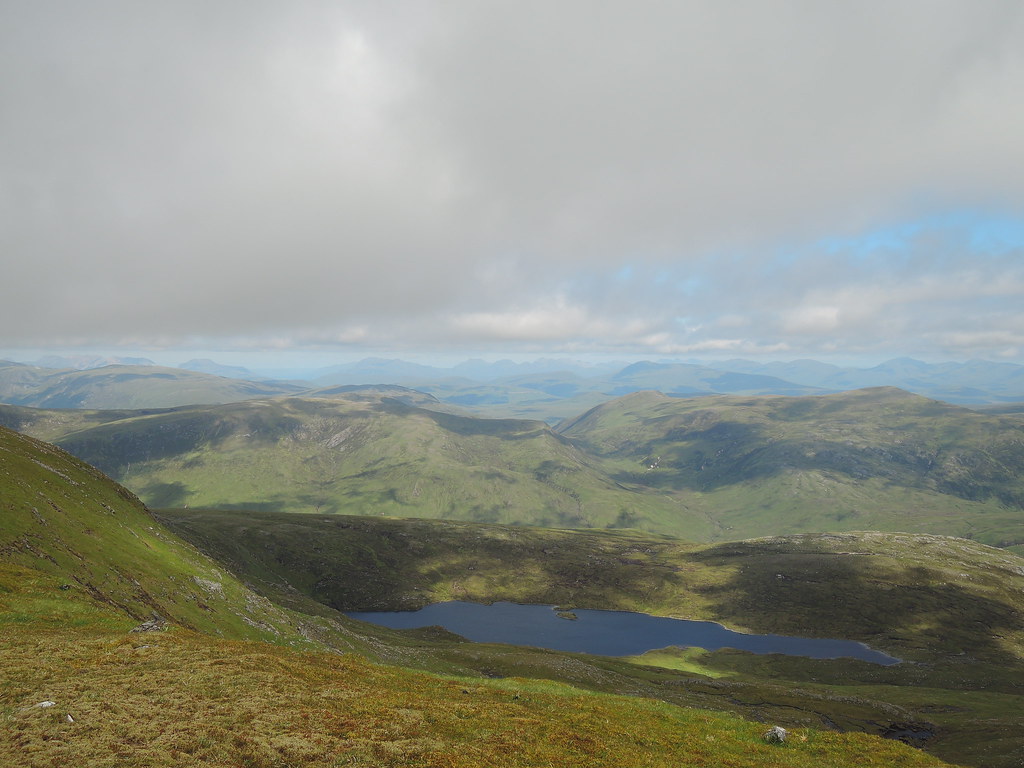 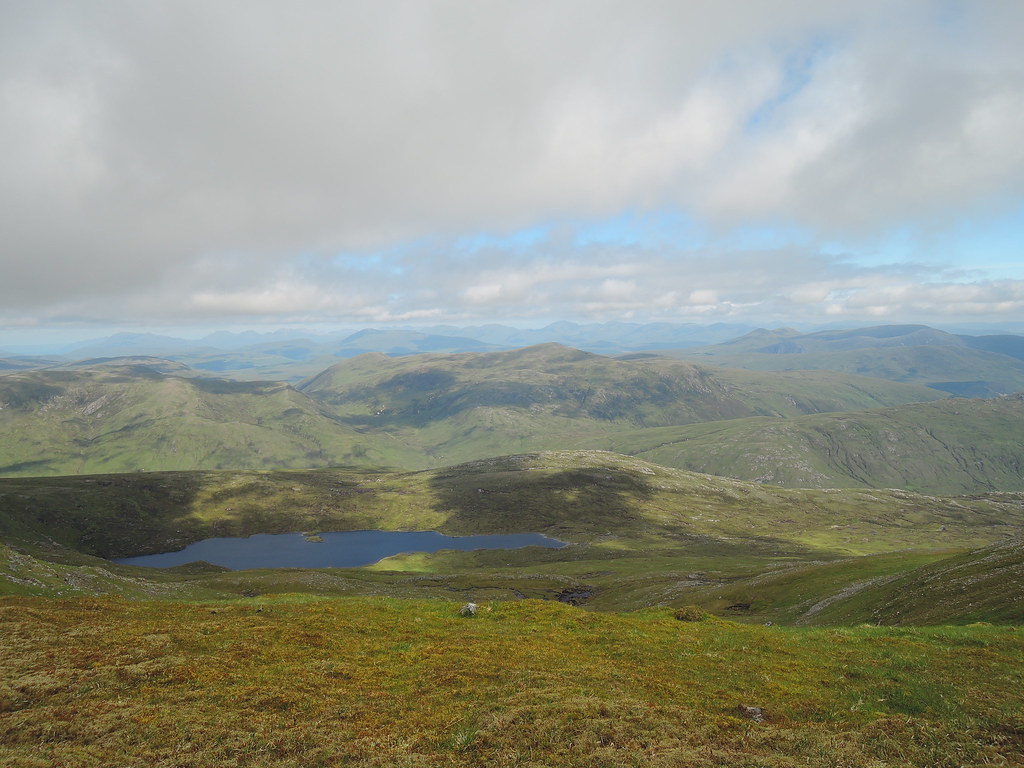 Descent path stays high to avoid bog, it's about halfway up the ridge ahead. 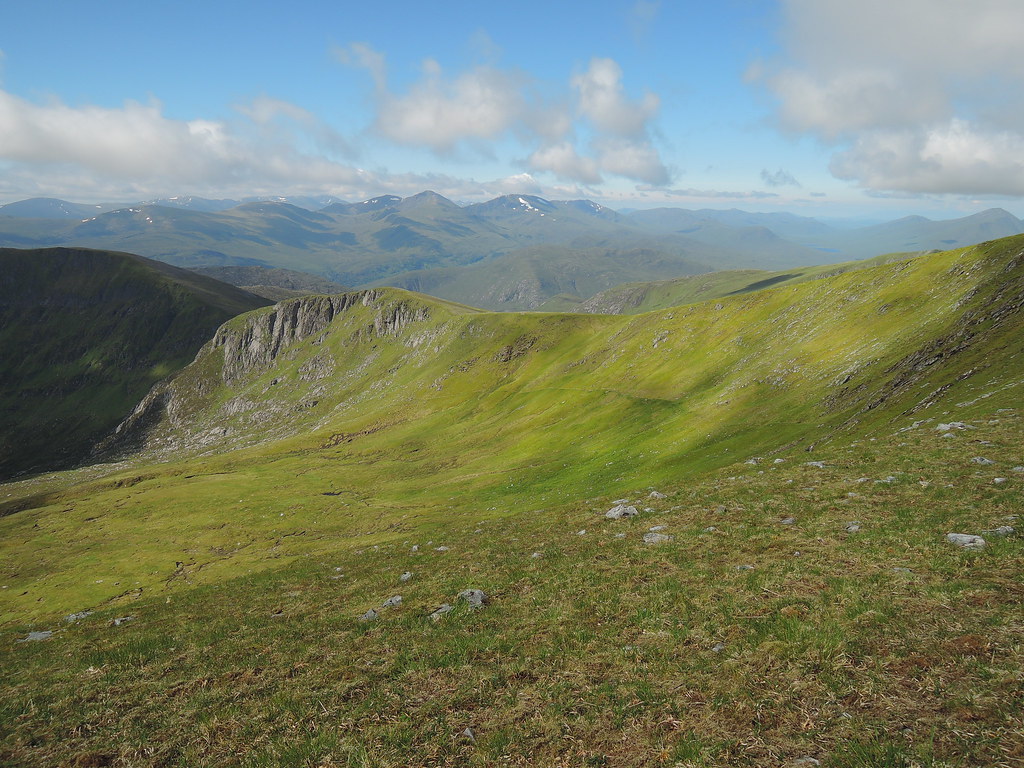 Then runs along the left hand side of the lochan. 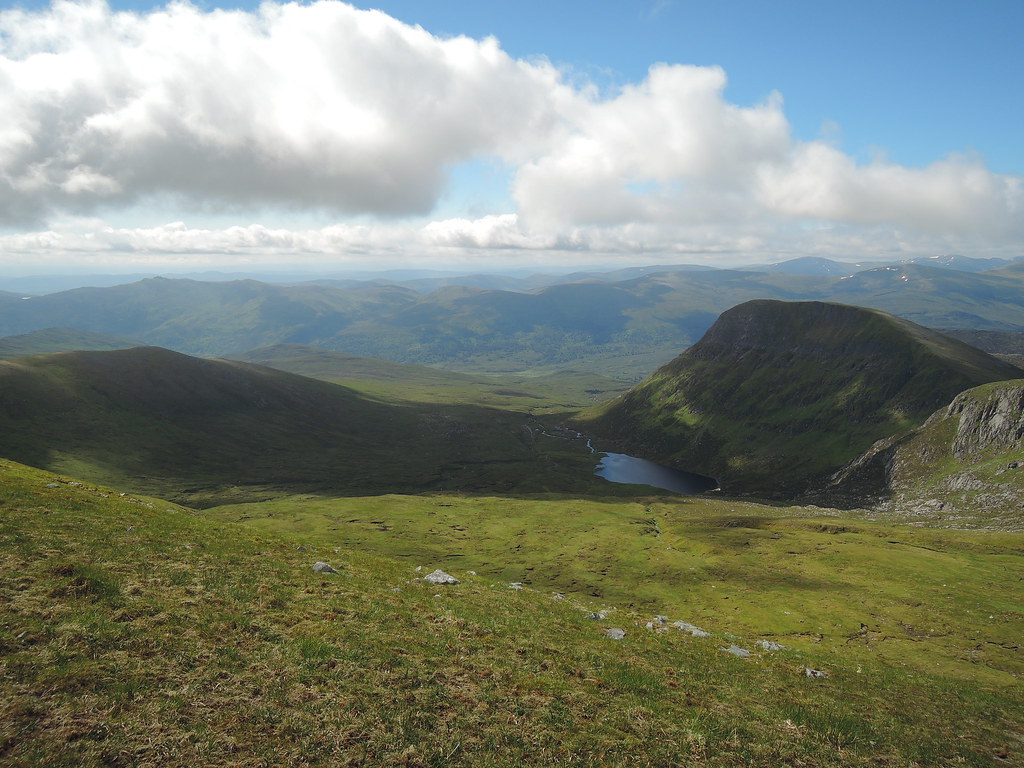 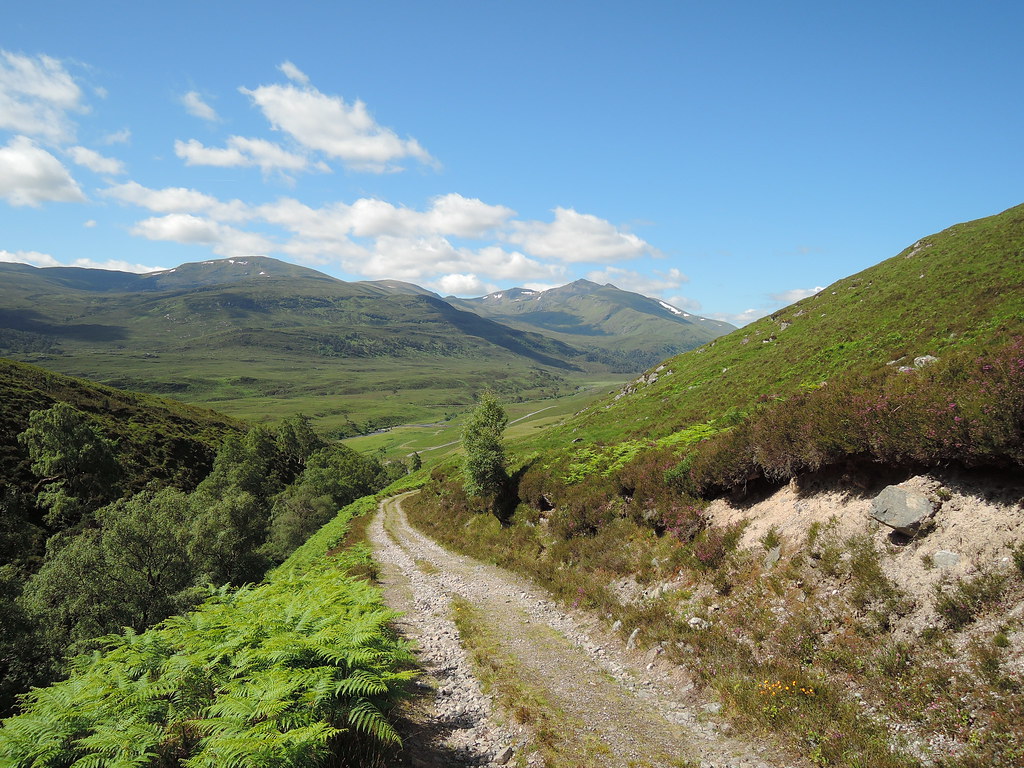 Love the pictures of the low cloud scraping the tops - great atmosphere and you still got the views.

What luck about the car key - people you meet on the hill are so friendly - and trustworthy.

Enjoyed reading your report, looks like you had one of those days where you were just on the good side of changeable cloud and mist - lovely views anyway. Great pics, which give a good feel for the walk. I've been wondering about how to tackle these hills and been thinking about biking in to avoid the odd gatekeeper problem; your shots of the road surface and description have convinced me - I'll give it a go. Thanks for the encouragement and an entertaining and useful walk description. Also, I'm looking for a new camping mattress, will give Argos a miss and splash out!