This was an early walk, snatched due to decent forecasts for the morning (but with cloud and maybe rain coming over from the southeast later that day and the next). After an evening finish for my last walk, I didn't start quite so early as hoped, but was parked and on my way by 8:30.

I'd already walked the first half-mile or so of this route when descending from the Ring of Steall just the day before. The path remained pleasant and easy going, climbing gradually alongside a burn, accompanied by birks, bluebells and other wildflowers. 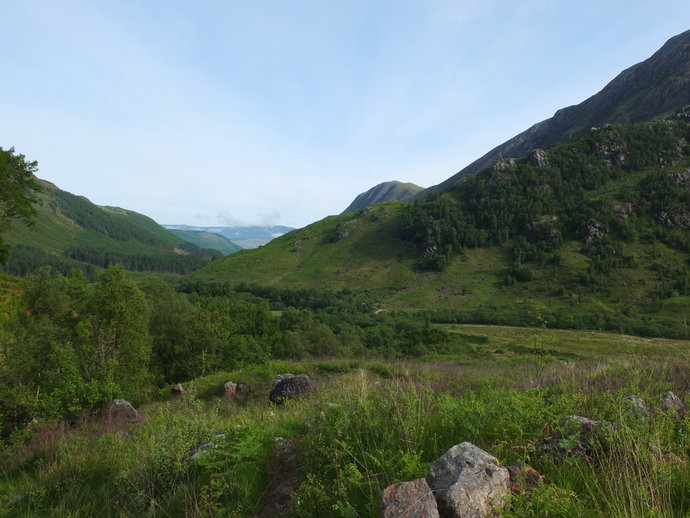 The sun was bright and weather quite warm for the hour (especially in the sheltered glen), so I was grateful of some shade from Cairn a'Mhaim and the Devil's Ridge, rising steeply to my left. The stream sank into a little gorge at points, while the path climbed and wound its way upwards. 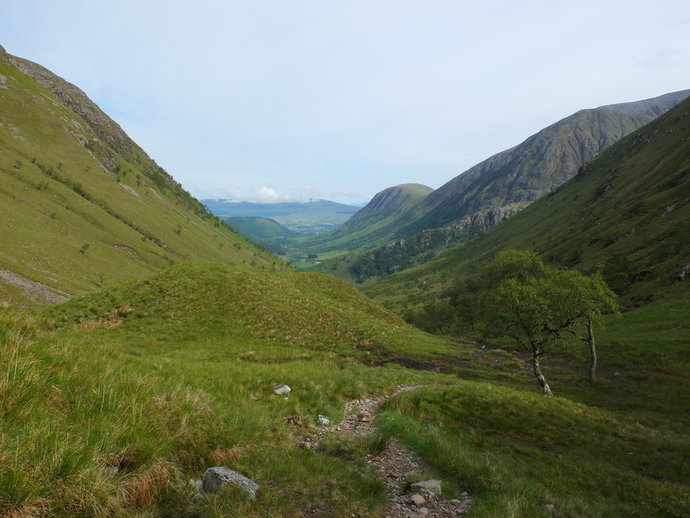 I had the impressive sight of Stob Ban's buttresses ahead to tempt me on. About two thirds of the way up, there was some slight scrambling where the path had slipped, clinging close to the east side of the corrie. I was soon back onto solid footing, but it seemed a hint of steeper things ahead. 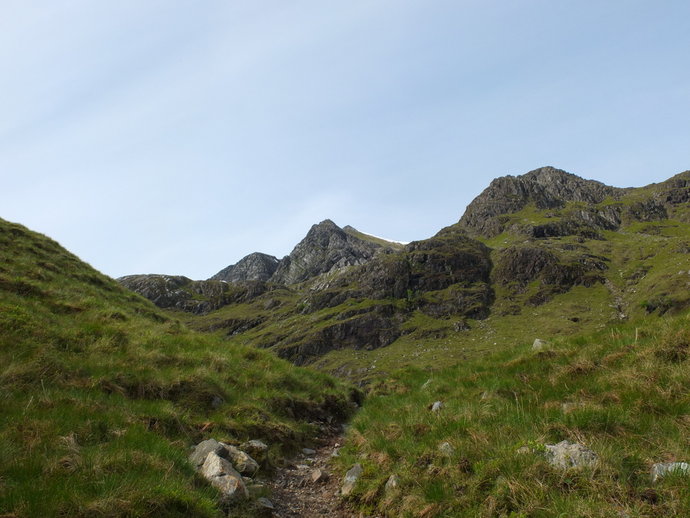 The last stage up through the corrie proved straightforward, emerging to a grassy bealach. That brought views southward as far as Bidean nam Bian and Beinn a'Bheithir, as well as this morning's target close ahead. 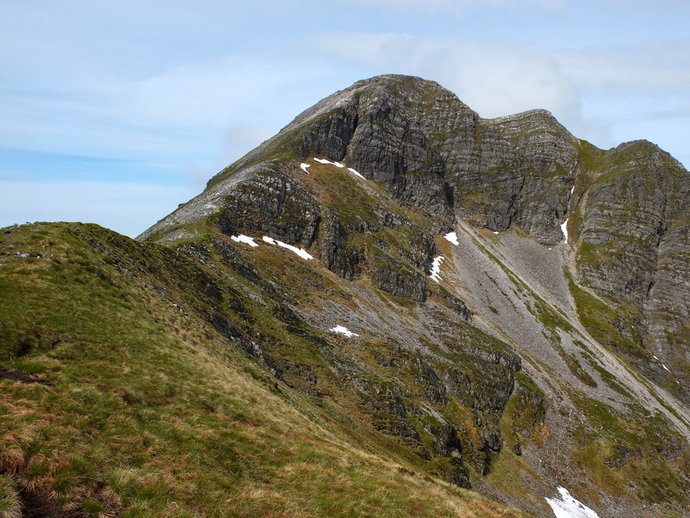 Stob Ban from the bealach

A decent path makes easy work of Stob Ban, passing the first grassy shoulder to zig-zag up the eastern ridge. This is moderately steep, but stays in walking, rather than scrambling, territory. The top offers fine views in most directions, whether Cairn a'Mhaim and the Devil's ridge, towards Ben Nevis, or west towards the rest of the walk. 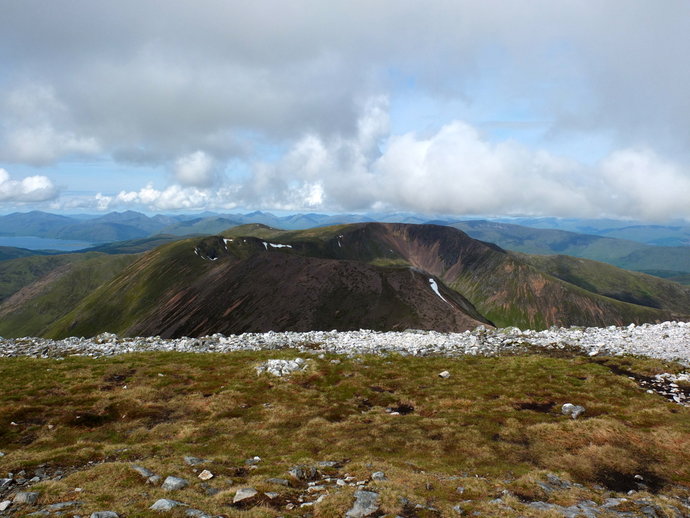 I descended north, following a walkers' path then leaving that a little way to visit a slight top. That looked over a dramatic north ridge, but I soon rejoined the path, letting a pair of ravens glide past to check whether I'd left anything tasty from an early lunch stop. The next section, towards Mullach nan Coirean, is an interesting ridge walk, with some rocky sections available especially if you follow the ridge line (the path avoids some parts). The pink-red rock is also a change from the quartzite topping the higher Mamores (and Grey Corries).

The weather looked to be turning, with clouds thickening from the southeast. Those remained above most tops (apart from the Ben, which had a hat of cloud at most times that I looked over today or the day before). 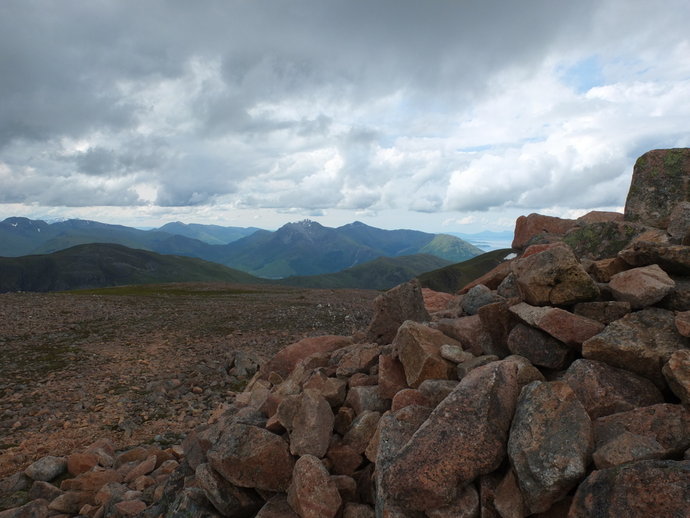 Mullach nan Coirean stands out on its own, surrounded by plunging corries, but several ridges offer routes to descend. I stuck to the WH route, so headed north, then turned east, following a path with views of the Coire Dearg to my right. That eventually reaches a deer-fence with a wooden stile, which I didn't take. 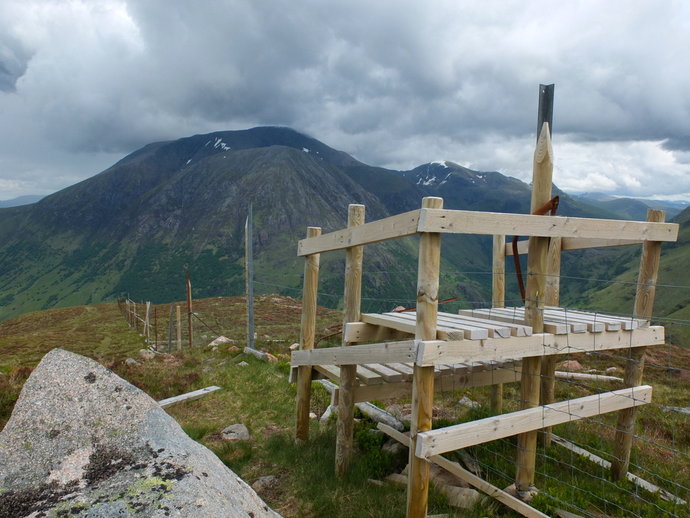 Things turned steep and boggy, following the west side of the fence for the next half of a mile, but eventually reached another stile, this time leading into the trees (though much of the forestry has been harvested) lower down Coire Riabhach. There's a well-made little path, though not shown on the map, to ease progress among the stumps and descend another hundred metres onto a broader forestry track.

I then followed that, heading gradually downhill, until I could pick up another footpath accompanying a stream to a few buildings at Achriabhach. Then a few hundred metres alongside the road returned me to the car-park, with the weather holding off though feeling ready for a shower.