A pretty grim day, but still a great walk (and sometimes scramble) around a classic Lakes circuit.

mosedale.gpx Open full screen  NB: Walkhighlands is not responsible for the accuracy of gpx files in users posts
The forecast had been pretty good, but Wasdale was beneath a constant drizzle with all the tops cloaked in mist. But it’s a remote place to go not to at least make a go of things in the hope it would clear up… And at least if you pick a (midweek) day like this, you avoid the crowds – the carparks were virtually empty and I didn’t see a soul between Black Sail Pass and the end of the walk. The first miles up to the pass, belying the dramatic surroundings, are very easy, almost non-stop, going. From there though the clag had descended and (bar a brief few revelatory seconds when Steeple appeared strikingly below out of the gloom – barely for long enough to pull out the camera) I didn’t see more than a few yards until dropping back down to Dore Head. Somehow it’s still a really enjoyable traverse though – a challenging and interesting route of steep rock and clambers over boulders, interspersed by surprise flat grassy strolls (and one rather hairy descent to Wind Gap). You’re rarely far from the steep crags falling away to the right, and not seeing where they end probably only adds to their drama. With little to look at and an easy route to follow, there was plenty of time to think about whether it was quite the right day to tackle Yewbarrow from this craggy side. From its foot, clearer skies and a sight of a well-trodden route leading at least halfway up Stirrup Crag was just about enough to decide in favour of ‘valour’ though. And it’s a really great way up – probably the most challenging I’ve seen in the Lakes in terms of routefinding, plenty of apparent dead ends, and some very limb-stretching moves, but a fascinating adventure and rarely with a real sense of risk, the trickier moves being well confined and unexposed. The long top of the fell is a little disappointing afterwards - flat, marshy, and still without much to see in the distance. Having used up plenty of adrenaline on Stirrup Crag and liking a climb on firm rock a lot more than either shifting scree or steep descents, both of which the southern Great Door way off seemed to promise in spades, it was definitely a day to retreat north and take Wainwright’s coward’s way (“for such, the author bled in vain”) back to Dore Head. This has now gained a clear path and a useful cairn marking the way off (from the first depression south of Stirrup Crag), and it’s a pretty good route, without danger but still winding a dramatic way across and below the crags. Even this ends in a bit of steep scree – as if Yewbarrow will allow no truly easy way on or off – but it’s at least short and gentle enough for now to be ‘surfable’. Back to Red Pike 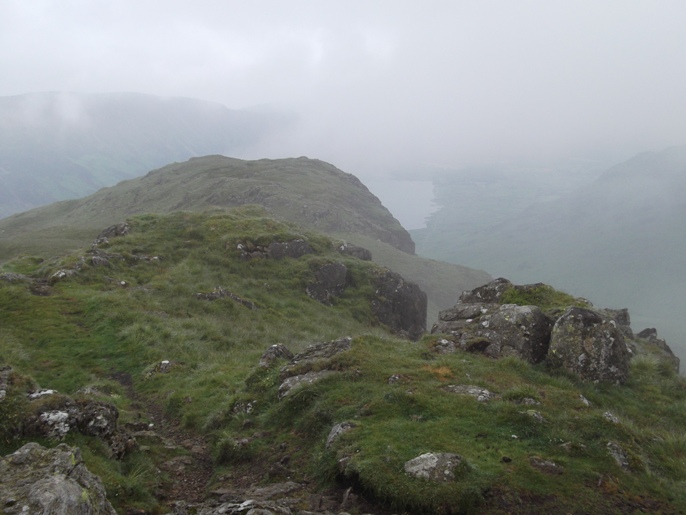 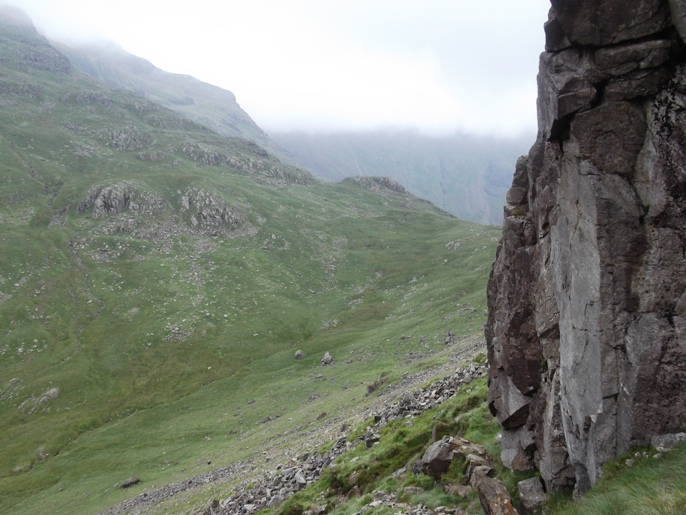 From there, those (me!) expecting the Over Beck path to be a relaxing valley route will be disappointed – it looks surprisingly little-used and is pretty rough and often marshy. It also resolutely refuses to descend as you’d wish, indeed even climbing to meet the way down from Dropping Crag only so it can then fall more suddenly and knee-burningly at the end. The git... Only easy road-walking back to Wasdale Head after that though, with lovely dark views over Wast Water and to the landmark peaks all around. A grand circuit, and definitely one to reprise one day in the sunshine. 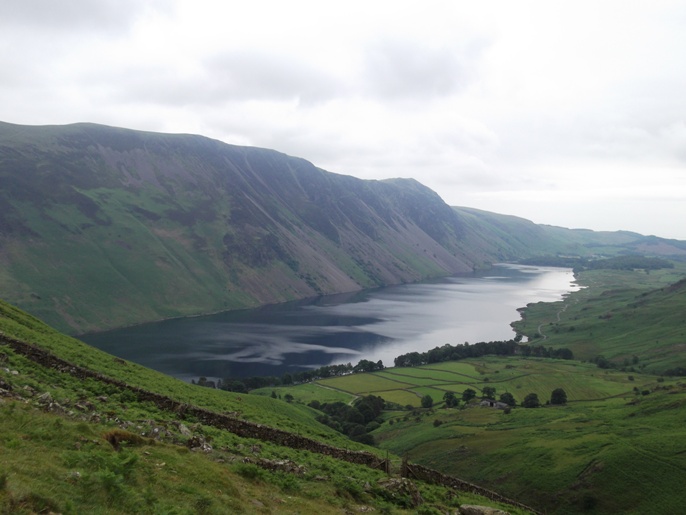 Back up to Bell Rib A great round of fells, Poppie, and Stirrup Crag is a nice little scramble. You are right about the idea of revisiting these hills in sunshine. If you climb Pillar using the detour via Shamrock Traverse, it's a more exciting route with some very impressive views of Pillar Rock. You say you found Yewbarrow's summit ridge disappointing after Stirrup Crag. If you continue that ridge after the summit along to Great Door, it's quite magnificent with some of the best views in Britain.

Well done on completing the horseshoe in some quite demanding conditions.

Nice day out and good pics despite the clag. Stirrup Crag is 'interesting' and can take a little adrenaline to go up it

Yewbarrow is a great viewpoint when you can see anything. The Western fells always seem much quieter than some of the more popular areas. On both recent trips up Middle Fell, Seatallan and Haycock from Wasdale saw three people all day on a Saturday. They are however good hills to climb and well worth the drive from the M6 to Wasdale. Dave

A great walk and yes, do go back in better weather

I enjoyed your photos.
I've walked up Yewbarrow many times when camping at Wasdale Head and always went down Stirrup Crag, never up!! I still feel ill when thinking about looking through Great Door

Well done Poppy a great effort in grim conditions. Still ha ve Yewbarrow on my to do list looking forward to the view from Great Door too.