Its been a while since my last blog, and I felt the completion of the Arrochar munros and number 20 for me warranted it. After doing my back in a month ago and having to cancel two walks I was mighty eager to be getting back out on the hills. I'd been looking at this route for a while, with the soul purpose of clearing up the remaining munros here, before the push north!!

So eager was I, that I said to hell with a long lie on Saturday morning, up at 3.30am, in the car by 4am, and walking from Inveruglas car park at 5am. I have never started a walk this early, but it wont be my last. The serene nature of the sun rising on a new day, the chameleon colours of the hills and the absolute lack of civilisation around put me in great spirits for the day ahead. I had hoped to be on the summit of Vane for sunrise but that was to be a bit presumptuous. The sun was already rising as I took the road up by Inveruglas Water, however with the sun starting to hit the tops of the hills, bathing them in golden light, only seen thus far in other peoples photos! An incentive for future early starts.

Having been up Vorlich a couple of weeks ago, I moved quickly passed Coiregrogan, and onto the track for the Glen Loin loop, leading to Vane. The path diverts off, exactly as the walkhighlands guide says, and I began my ascent. The sun was breaking through the clouds casting differing shadows every time I looked around. The sun seemed to be warm at this early time, but it was more likely me just sweating it out that point, I stopped a couple of times for water and kept ploughing on. The path is good, and no major problems to face on the way up. I reached the summit at 7am, and immediately was vindicated with the decision to get up so early. Being the only one for miles, having breakfast on top of a munro while the majority of UK were in their kip, felt fantastic. The views had really opened up and as the Met Office weather had stated, visibility was top notch. I stayed up for around 15/20 mins before beginning the traverse to the bealach under Narnain. Route down from Vane 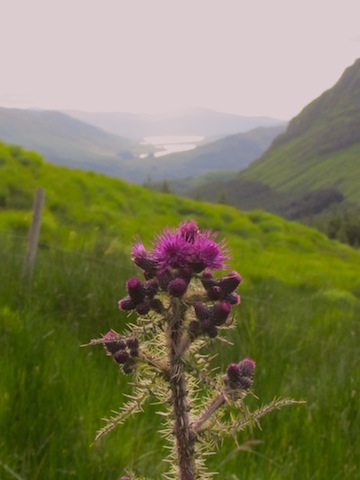 I didnt fancy returning the way I came - back down Vane - and so went looking for a way down off the western side. After finding myself trapped on a couple of ledges and going back up to come down, I picked my way down to about 400m, before skirting the southern reaches of Ben Ime. The next part was to be the second toughest slog of the day (first still to come). With no path I had to plough on up to the bealach. I dont know what they are called, someone out there probably does, but y'know those big mounds of grass that seem like they have rocks at the bottom? Yes? No? Just me then!! For the next hour my ankles were never flat on the ground, being twisted this way and that, and was really glad to get up and out of it before setting off for Narnain. Stopped for a breather here, and still marvelled at not seeing anyone at all... Just as I start Narnain a chap comes down off the hill, he camped out the night before and was heading home! Theres always someone that starts earlier than you!
Happy to be on a path again I pulled up to Narnain, the views down Loch Long and Ben Arthur were superb, being able to see all the way down to Ailsa Craig in the Firth. Met three happy lads at the top from Edinburgh, who were heading round the way I came taking in Ime as well and after a brief chat, I settled down for a good rest in the shelter and got stuck in to the lunch box. At this point I had a choice, I hadn't really figured out the best way to get down, thinking of a part return or heading for the ridge leading off of Narnain towards A Chrois. When there is any type of ridge involved though, theres only going to be one winner! I set off for A Chrois which turned out to be longer and much harder than it looked in front of me and on the map. I'm putting it down to tired legs! I'm glad I took this way though as the view point at the end was one of the finest of the day. The silvery tongues of Loch Lomond, Arklett, Katrine, Sloy and Long laid out in front, as well as fine views of Ime, Vane and Narnain behind. 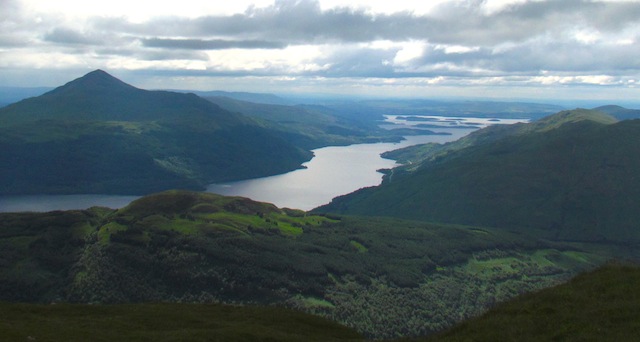 My plan on getting down involved just going off the eastern side of A Chrois (begin longest slog of the day), on the map it looked very similar to the route of Vane, but it turned into a relentless knee killing descent and getting scratched by plants, rocks, and i'm sure a few beasty bites. I'm not totally sure I would recommend this as a path down, if it was even a little more wet, i'm sure it would have been much trickier.
How and ever all part of the adventure, the path less trodden and all that, I made it down to the tree line, and the relative ease of flatter land. With no path to follow, the plantations arranged in rows made it quite simple to just go straight north, hitting the forestry track, Allt Coiregrogan and then the Glen Loin loop path to the start of Vane. A bit of off roading was fun for the end of the day, but with my legs killing me now, and pine needles getting stuck down my t-shirt (clearly the plantation didnt want me in there), I was relieved to make it back onto the solid path. The rain came on a little now, but it was truly refreshing and only lasted 15mins with the mile or so back to the car, finishing at 1230.

Having done lots of climbing and walking around this area with my dad, I'll be sad to leave this area for a while as I focus on Munros elsewhere. Definitely not the last time though, cheers Arrochar!!

Nice report. Glad to see its not just me with the early starts

Cheers spiderwebb, I dont think that will be the last early rise!!