Book cover photo to keep you interested (er, it's not actually from a book cover, it is one of my own photos!): With just 5 Munros under my belt since re-starting last November, progressing to the most remote mountains on offer was not necessarily an obvious choice - not to me at least, but it was obvious to The Boss, who politely suggested that if I was serious about tackling the complete round over the next few years, then I should consider doing some of the tougher stuff now, when slightly less decrepit - at 54 it's only going one way

I also really fancied getting back into camping, so came up with a plan to walk in from Corrie Hallie, camp high on the ridge at Am Briseadh, at the foot of the boulder field up Sgurr Bann, walk round the 5 Munros the next day, camp again at the top of the descent down to Corrie Hallie, leaving the day clear for the long drive home, so a trek with all the kit every step of the way...

But first, some training was required... a couple of days in the Lakes, a tramp across the NY moors with full pack, topped off by the Yorkshire Three Peaks challenge 2 weeks prior to Fisherfield certainly helped. I kept the pack as light as possible, especially given the profile of the route

Hadn't really thought about the bumps on the way in and out... they make a difference!

I left York early Friday morning - the City all bedecked with yellow bunting for the start of the Tour de France next weekend - and arrived at Corrie Hallie lay-by at about 2pm, getting the second to last spot. There's a significant degree of initial ascent in the walk up from the lay-by, but all good practice for the walk ahead, and very pleasant surroundings: After a couple of miles the ascent eases off onto the plateau of Sail Liath and the views of Fisherfield are opened up in front.
The camp site can be seen up on the ridge between Beinn a' Chladeimh on the right and Sgurr Ban with its quartz icing top. The first river crossing was visible down in the valley, the Abhaim Loch an Nid. The rivers were pretty low given the dryish weather of late, but still required boots and trouser bottom bits off - and my guilty pleasure of putting on Keen sandals for the rocks, worth every gram for me. The first views of Beinn Chlaidheimh and Sgurr Ban The Abhainn Loch an Nid river in benign condition

On the other side of the river I just clambered through the tussocks, heather and bog in a sort of straight line towards the bealach at Am Briseadh, and got there about 3.5 hours after leaving the car; including the ascent out of Corrie Hallie there had been about 800-850 metres of ascent, good to get some in the bank for the next day.
I found a decent spot near some Lochans: Tent with Beinn Chlaidheimh behind

A very quiet night evening ensued, marred only by the disgusting meal I'd bought from Blacks - one of those where you pour hot water in, leave for 8 minutes then attempt to eat. Never again. I may as well have dug a hole in the ground and poured it straight in, cutting out the middle man...
The wind was coming out of the north and east, not too strong, but at 650 metres the temperature was not typical of your usual June balmy summer evening, maybe 4-6 degrees!
There's not a lot of darkness this time of year, and I was up and way by 5:30, having enjoyed the changing hues of the grey/blue morning sky. Not as impressive as sunrises on other reports, but the sheer joy of being alone up there was enough by itself.
The initial Munro, Sgurr Bann, was gained by its north-east shoulder, a fairly arduous quartz boulder field. I was happy to see the stone shelter coming out of the cloud.. It was raining a bit by now, and the first two Munros were both covered intermittently in cloud, but path finding was reasonably ok, although I should think its quite easy to go off the plateau summit of Sgurr Ban the wrong way if you're not too careful. There were some of those fab mountain moments when the clouds blow away to give you back the sense of grandeur that the mist takes away: Mullach Coire Mhic Fhearchair is the high point of the walk, gained by a steepish scree slope - not as bad as it looks, I agree, and a descent which involves a little down-scrambling, all good fun.

On the bypass path round Meall Garbh the cloud finally lifted for once and for all, and the views were awe-inspiring: Looking down Glenn na Muice to An Teallach

From the Bealach Odhar the ascent of Beinn Tarsuinn seemed very straightforward after the boulder and scree of the first two, and the views from the top were simply stunning: On the summit of Beinn Tarsuinn I met my first other walker of the day, a young fella who'd walked in from Kinlochewe. And then came the second trickiest bit of the walk for me, getting off Beinn Tarsuinn was a bit of a problem: I went down to the left on scree immediately after leaving the tennis court, and then for some reason I veered off piste, in as much as I seemed to go along small tracks which all petered out, leaving me to scramble in undignified fashion across heather, rock and bog, until finally the bealach at Pollan na Muice was reached. This was a bit of a low point of the walk for me, things seemed to have slowed considerably, I was beginning to feel the pack weight as well, there was only one thing for it: a change of socks. It worked, and I started the long trudge up to the summit of A'Mhaighdean through rocks and on grassy slopes. I met another couple of walkers who had camped out nearby, after a night at Shenavall the previous day. It seems a long old haul up that last grassy slope, but the prize is immense, stunning and immediate vistas come into view. I'm sorry that the photos don't really do the justice that the real life ones inspire. One day it would be good to come back with the decent camera and lean out over the edge with ultra-wide angle lens etc.. one day... Looking south over the magical Gorm Loch Mor, suspended high in the hills

A feel for the depth of the landscape and the exposure of the cliffs on A'Mhaighdean's western flank:

Britain's No.1 view, looking west across Fionn Loch to Loch Ewe and beyond.

I could have spent hours up there drinking it all in, but sadly time pressure was on, I'd determined to be on the summit of Ruadh Stac Mor by 3pm, time was marching on. The southern flank of Ruadh Stac Mor, the path up is a scree and scramble, starting to the left of the crags at the bottom There was a tricky movement part of the way up the scree and crags, involving an ungainly manoeuvre onto a sandstone ledge, otherwise it was relatively straightforward ascending, and I made it with 15 minutes to spare. On the top of the 5th Munro of the day - in one day doubling my total of the modern era!

...And that was more than could be said for the descent off Ruadh Stac Mor in my opinion, the trickiest part of the day due to the care needed and the fatigue in my legs and head. I ended up picking my way over huge sandstone boulders for what seemed like ages, before reaching the gap between the two lochans - which was a lovely spot and worth celebrating with a hot brew and a bar of chocolate. 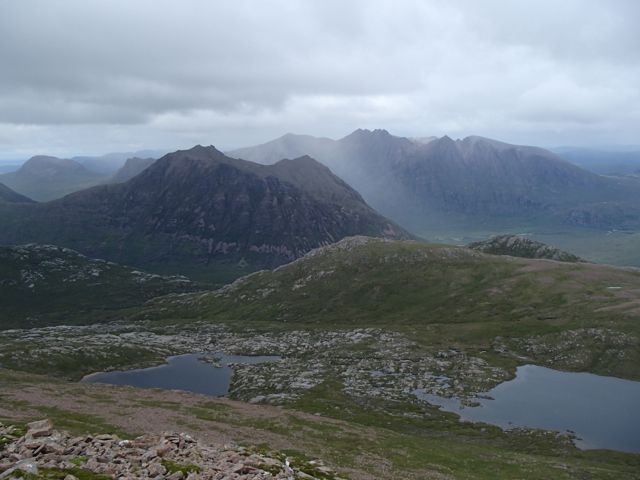 The descent off Ruadh Stac Mor

Again I seemed to have no problem in losing any semblance of a path, but the going was straightforward down to the stalker's path which took me pleasantly down to Glenn na Muice Beag and then Gleann na Muice itself. The river crossing was uneventful, the cool waters therapeutic on hot feet. The lodge in Glenn na Muice from the river crossing

Even the worst bog imaginable was in a good mood today, and the evening sunshine lifted morale. An Teallach above the Shenavall area

I cooked (if that's the correct term) after the second river crossing, another gross pre-prepared dehydrated nonsense, some of which went to feed the frogs. Cruel maybe.
After a quick chat with some folk enjoying the evening sun outside the bothy I walked out, another very decent climb for the end of the day, and eventually said goodbye to Fisherfield. I camped on a bit of rare flat ground at the top of the descent down to Corrie Hallie, very late and tired, but a reasonable kip despite deer barking.
So, a long old slog, but worth every step. Not much in the way of paths for a lot of it, but a great experience, and to be honest, one that I'd have struggled to get my head around at this stage of the game without the excellent walk reports I found on this forum, especially Spiderweb, Rockhopper (awesome walk there with AT as well!) and Weaselmaster, thanks to you all.

The experience really helped me calibrate my performance for future planning of walks, was well worth it, and where else could you walk over five mountains in these islands on the last Saturday of June and only meet six other people?!

Great report Jonathan, enjoyed reading it and some fantastic photo's

Will get up that way one day, it does look awesome

Loved your culinary descriptions:
""A very quiet night evening ensued, marred only by the disgusting meal I'd bought from Blacks - one of those where you pour hot water in, leave for 8 minutes then attempt to eat. Never again. I may as well have dug a hole in the ground and poured it straight in, cutting out the middle man... & I cooked (if that's the correct term) after the second river crossing, another gross pre-prepared dehydrated nonsense, some of which went to feed the frogs. Cruel maybe.""

Nice one and well done doubling the total

Sounds like I need to avoid your meals source though have been quite happy with mountainhouse dehydrated meals for the weight saving. Certainly a good time of year for this walk as you get very long days - cheers