Hills closer to home meant not having to get up too early. Uneventful drive to Lochgoilhead and parked in a wee lay-by just north of Lettermay. Was aware of possible problems due to windblown trees but was hoping for the best – didn’t quite work out that way.

Set off up the track past some houses winding round before going into the trees.

Views of the hills for the walk ahead and a waterfall (zoomed) below Casteal Dubh. 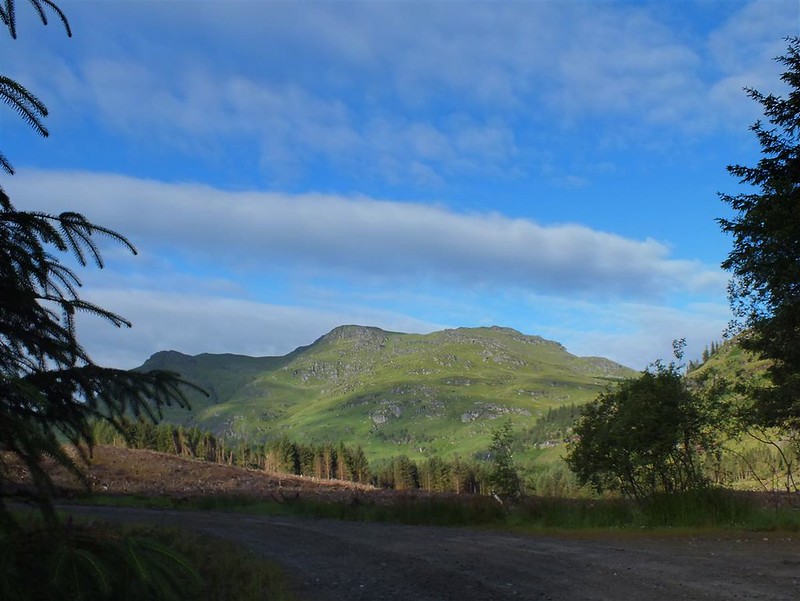 Got to the point where the track splits – could have taken a more direct route west then SW to Beinn Bheula but preferred a circular route so kept going SW. Initially there were two trees which had partially blown over but not causing any problems. Further on the track degenerated a bit into parallel furrows but still walkable.

At around NS168985 the track seemed to disappear just at the end of where the tees had been cleared. Wandered up and down a bit before crossing a small burn and funding a partial track running just below the forest.

Apart from going through mostly long wet grass it was OK until reaching another burn/waterfall which was the outlet from Lochan nan Cnaimh at around NS166980.

The track disappeared and again spent some time trying to find it on the other side of the water. It seemed to follow upwards at the side of the burn before disappearing into the forest. A little tricky at first due to boggy conditions and going under branches which then got worse as I headed into the forest. Tried various different ways through fallen trees and branches before eventually getting out on to the open hillside. Later on when looking over to this hillside it looked as though it may have been better to have headed up and round the forest when first arriving at NS168985.

Now on open hillside, skirted to the NW of Lochan nan Cnaimh.

Then up to a small bealach before the ascent to Creag Sgoilte. Long grass and ferns sections here – maybe not the best of ideas to have worn shorts today.

Once higher the views improve.

Then it’s a straightforward walk to the trig point on Beinn Bheula.

From there headed generally SE. Made a bit of an error initially at around NS154986 going too far north and reaching the top of some crags. Had to double back to get down past the crags.

Once on easier slopes headed NE skirting round the edge of a forested section.

Crossed a burn at the eastern end of Curra Lochain......”rope bridge”

Then initially up through some chopped trees debris to get to a fence then headed approx NW at an angle up the hillside – quite steep here.

Back to the south

Further up needed to change direction more to the NE to get through some crags before getting to the summit.

Could see Beinn Tharsuinn in the distance but Stob na Boine Druim-fhinn must have been hiding behind it. Negotiated some initially steep, craggy sections then off down easier grassy slopes and skirted round just to the west of Beinn Tharsuinn.

Then northwards to get to the end of a ridge which would take me up to the summit.

Up to the trig point

Now to get back down to the road. Mostly SE in direction – boggy and steep at times.

Quite a lot of long grassy sections which again slowed progress as the ground was very uneven underneath – a couple of times legs and feet dropped into holes. This and the earlier forest problems meant that the overall walk had taken a bit longer than I was expecting.


Lettermay 29jun2014 activelog.gpx Open full screen  NB: Walkhighlands is not responsible for the accuracy of gpx files in users posts

Back down to Corrow, followed a dirt road round through the estate then a short road section back to the car. Back in Glasgow late afternoon in plenty of time for dinner.

G'ah - I was so close to heading for Beinn Bheula yesterday too...what a fine day you got for it, and me just sat in the garden...Some great pics there too.

Great pic of the Fox

A nice area by the looks of your photos

Some lovely zoomed shots and an area that I know absolutely nothing about! Must investigate more!

. Had my eye on this lot and Cruach nam Mult for some time now. Looks like an interesting area away from the forestry. May form part of a larger plan backpacking up from Dunoon through Cowal to Arrochar. However working out how to get through the trees is quite an issue on that route!

Beautiful photos and looks like a great area to explore. I'm very partial to the Corbetts too!

Cracking report. Once my bike is fixed I'll be over to do that trio. Love the wee hills of Argyll.

I see those hills every day yet I always head further North. I think I'll save them for the winter.

Nice one RH, some fantastic photo's

some close shaves recently, WM - one of these days I'll bump into you

Graeme D wrote: an area that I know absolutely nothing about! Must investigate more!

am sure you'll have a great time when you do, MrD

malky_c wrote:However working out how to get through the trees is quite an issue on that route!

AnnieMacD wrote: I'm very partial to the Corbetts too!

cheers Annie - I'm starting to develop a liking for them

Fudgie wrote: I think I'll save them for the winter.

Fife Flyer wrote:It's nice when we have these sort of hills on our doorstep

definitely - makes for a longer lie in as well !