I'd been wanting to do this walk for a long time, and just after 11am on Sunday decided this is it and set off from Edinburgh, getting to the main car park around 2pm.

Quickly put on my boots, crossed the bridge and set off up the winding path 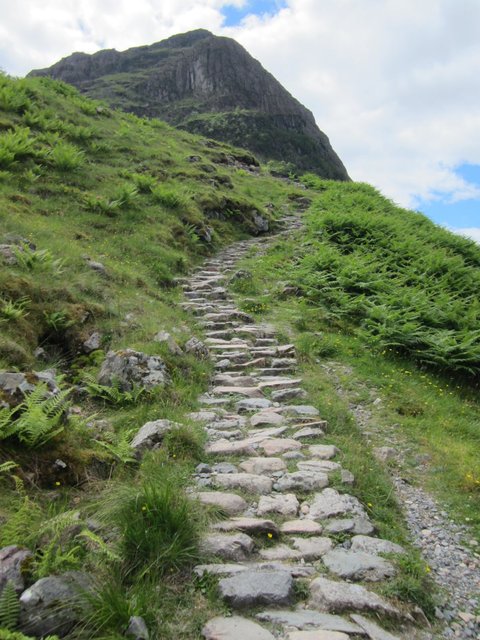 The sun came and went, and with it the heat, but very pleasant all in all going up the path and past the tranquil pool 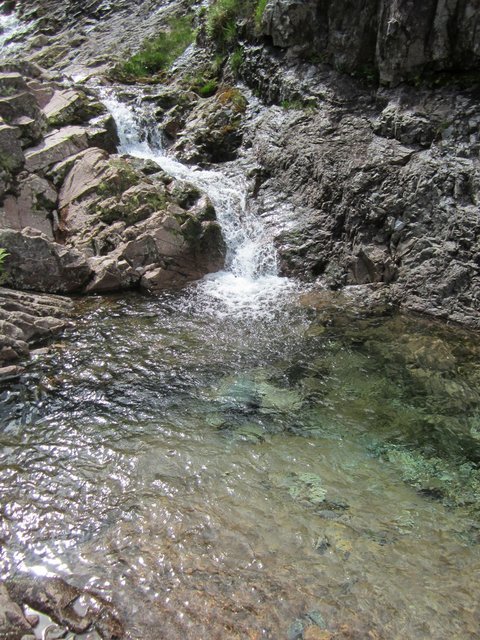 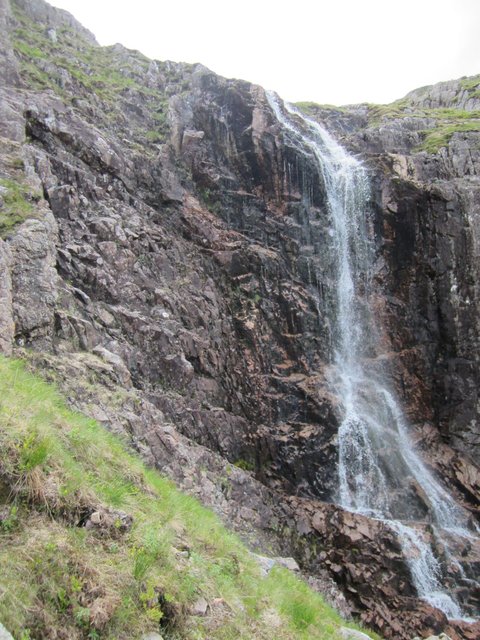 I think I took a wrong turn somewhere or the gps on the smartphone must have been bouncing off the buttresses as it was all over the place on the way up.
Anyway I scrambled up the path beside the waterfall easily and onto the plateau below Stob corie nan lochan and the buttresses 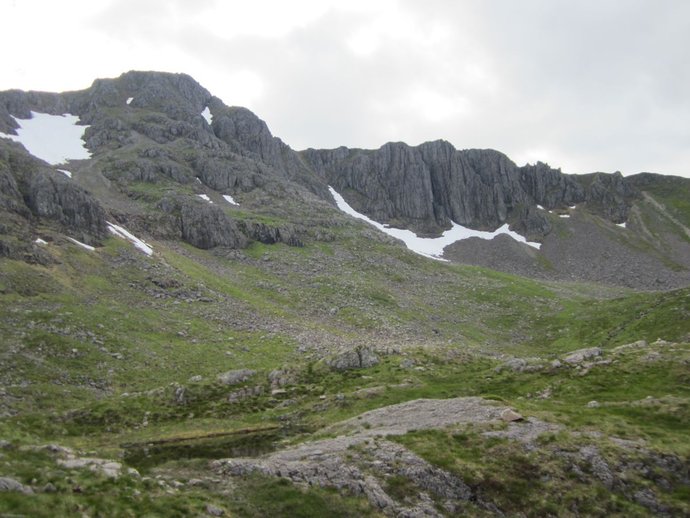 Took a look around on the plateau and the imposing Stob corie nan lochan, buttresses and the pools which feed the waterfall; there must have been a great deal of snow over the winter for there to be so much left at this time of year and for it to still be frozen in some of the pools.

Time was getting on, so as the gps seemed to have gotten back to normal I headed for the main route again and the start of the climb up to Stob corie nan Lochan.

The path disappeared into the rock on and off as I climbed up; sturdy boots required 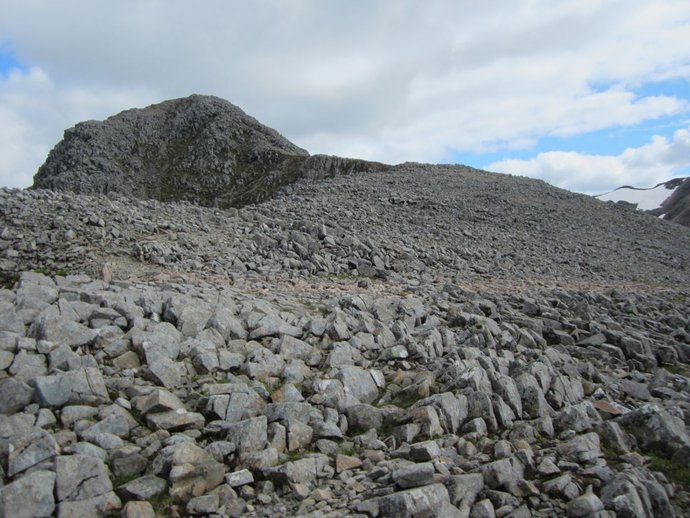 The views are like nothing I've seen before, this looking down into the plateau below Stob corie nan Lochan and the ridges and mountains beyond 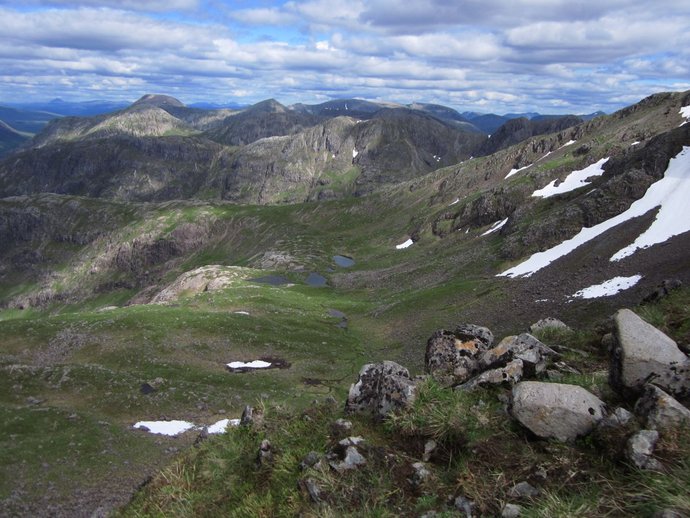 The rocks were very manageable and quite interesting, with some evidence of the hexagonal crystalising as they cooled from the volcanic activity The views all around just got better and better as I continued up. This view of the ridge between Stob corie nan Lochan and Bidean nam Bian 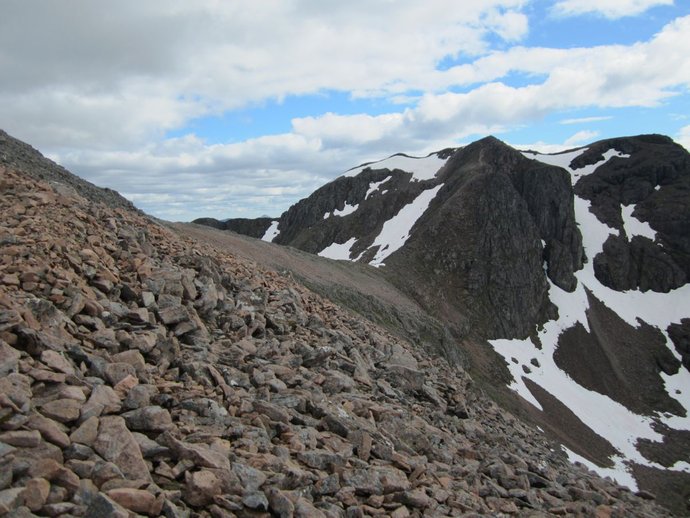 I stopped to take in the views and four eagles soared overhead, manged to get three in the photo, though have cropped the photo down to two. The one on the left in distinctive dive shape, fantastic.
Wish I'd had a better camera with me, but at least this is proof of their existence and my first positive identification. I'd thought I'd seen them before on other walks, but couldn't be sure, now I am. 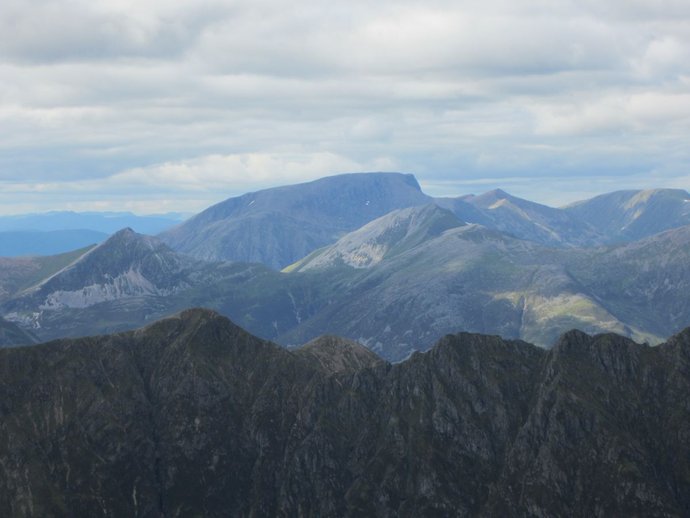 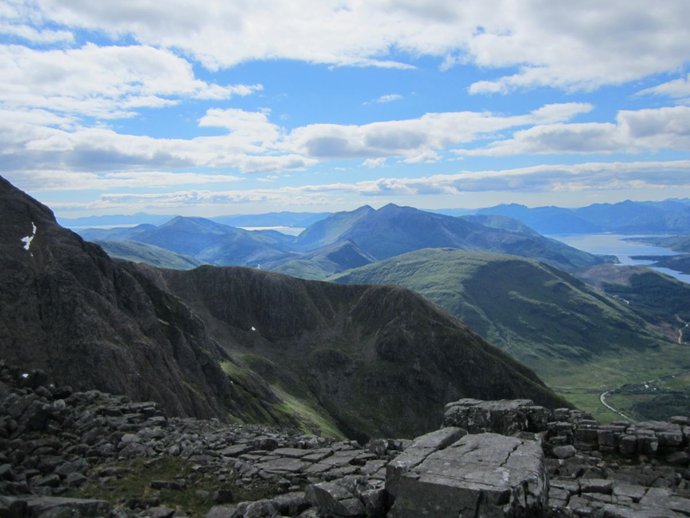 Had a sandwich at the top of Stob corie nan Lochan and then on to the main objective Bidean nam Bian.

The decent back down into the lost valley didn't look too promising from what I could see as I came down form Stob and along the ridge, but I'd got this far...

Made it!
An interesting although not as scary as it first looks climb up to the summit of Bidean nan Bian and a fabulous view south west 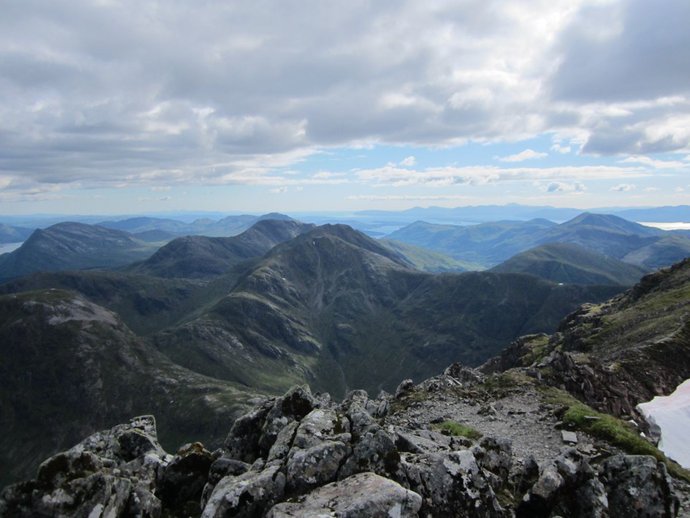 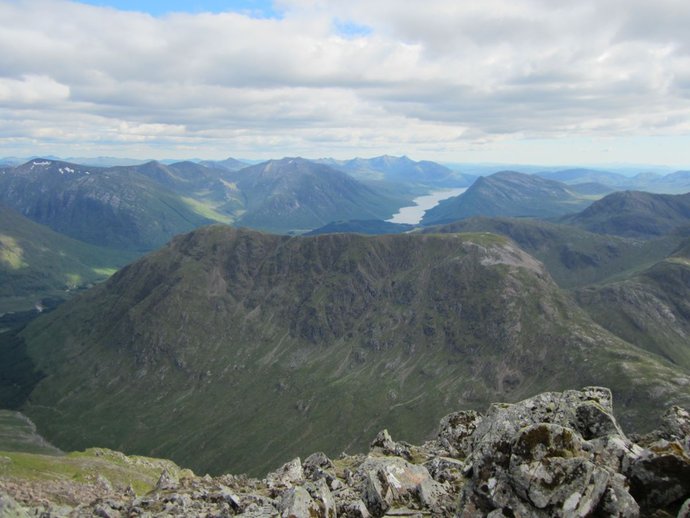 Aware of the time and the fact that my knee was starting to hurt, thought I would just find my way down into Bealach Dearg and make a decision on whether to try for Stob corie Sgreamhach as well. 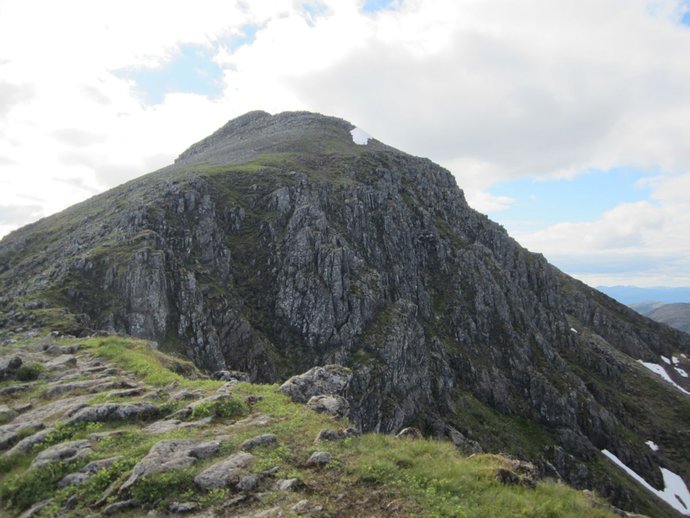 Got down into the Bealach and the small cairn which marks the steep start of the decent down into the lost valley and decided it was time for home. I'll be back for Stob corie Sgreamhach another day.

I was certainly paying attention as I descended making sure of secure hand and foot holds. There had been a small rock fall which was in the middle of the "path" but I wasn't taking off my gloves to take a photo!
It was still tricky going as I reached the top of the snow 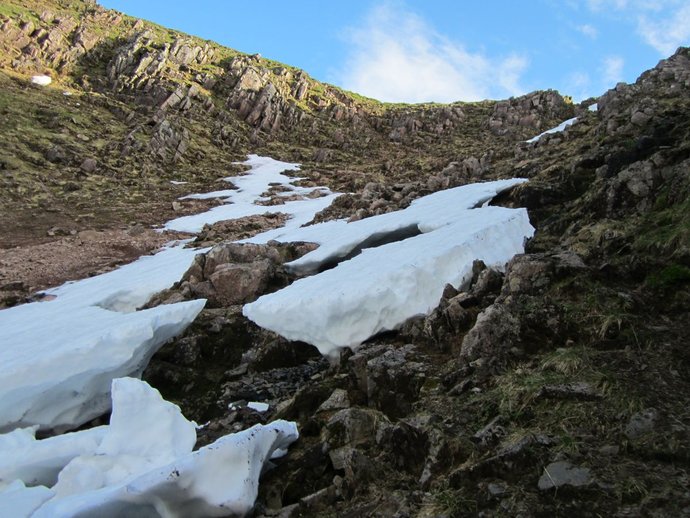 and the snow at the side of the "path" was in places still about a metre and a half thick. 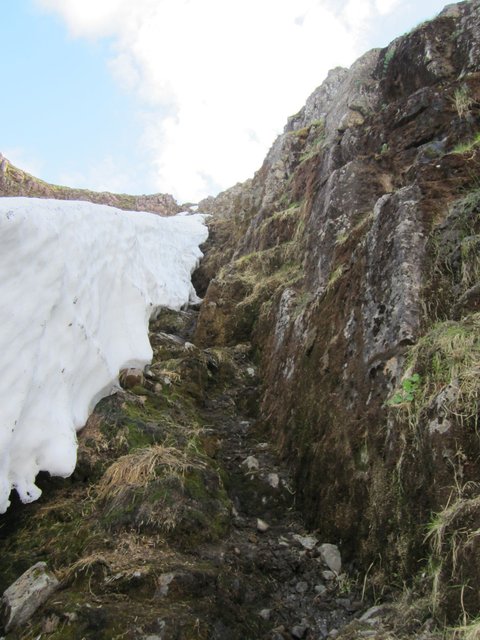 Continuing carefully down sometimes backtracking to find an easier route as the snow had covered the "path", once I got to a point where it I was comfortable I'd be able to control my rate of decent it was onto the snow and a quick slide down on the derriere feet first to the path proper as it emerged from the snow.

Perhaps they could also name this as land of the deep gorges, very interesting and the waterfalls they facilitate dramatic 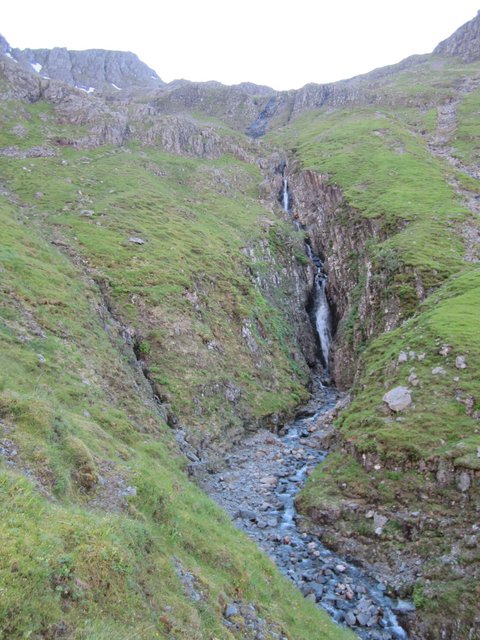 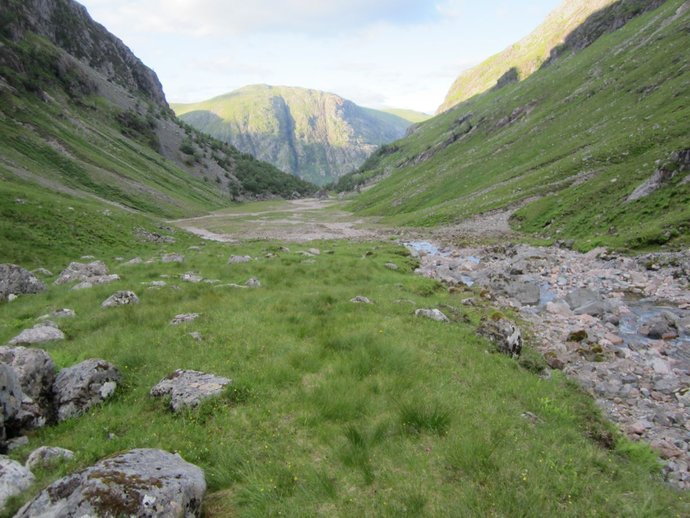 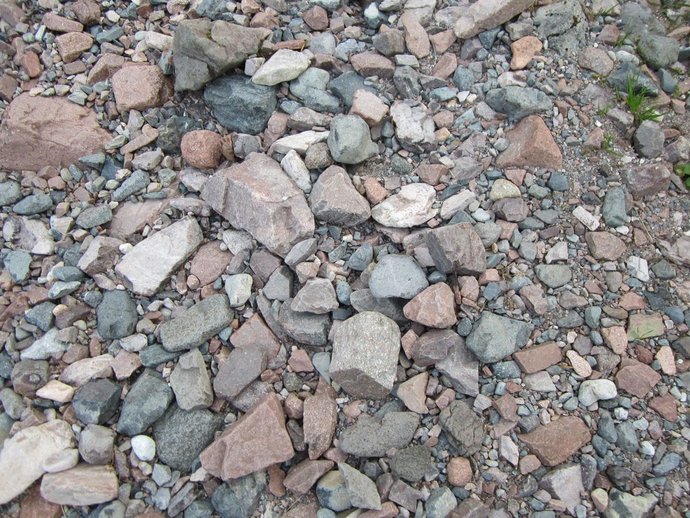 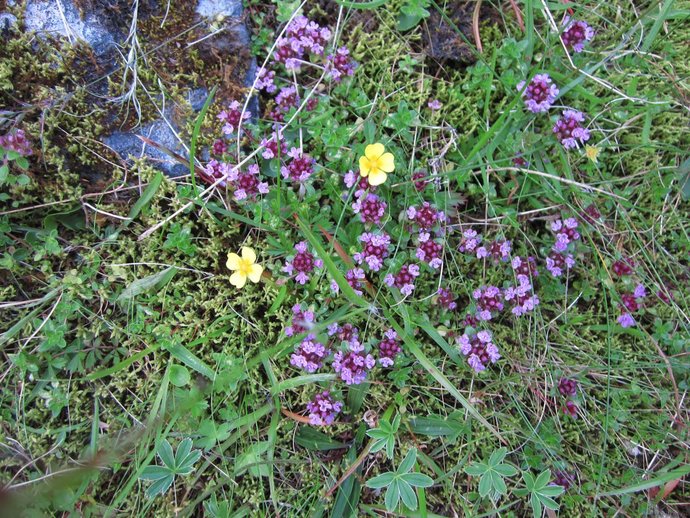 Looking back up past the stones that guard the exit or entrance (depending on which way you're traveling) of the lost valley towards the Belach and to the left of it Stob corie Sgreamhach, Bidean nam Bian and lower peak to the right. 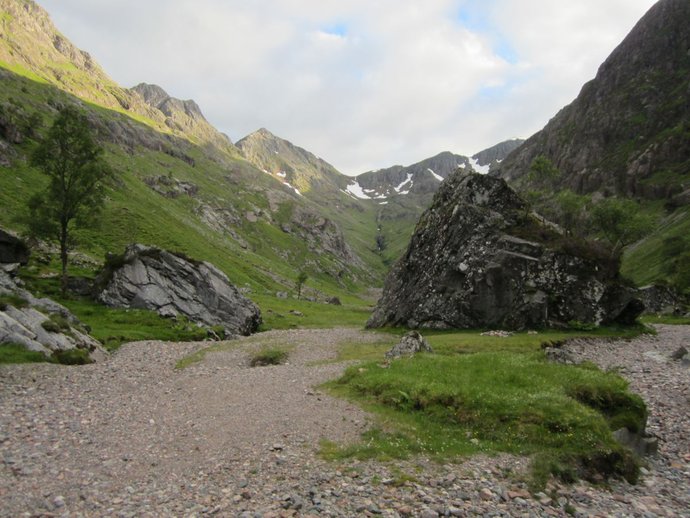 Exiting wasn't all that straight forward, entailing some scrambling over large boulders; must have been some rock fall! 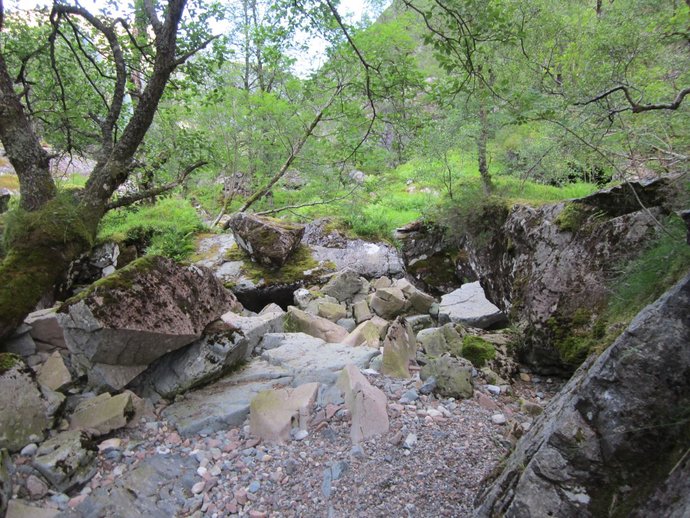 Perhaps I missed the path or perhaps there isn't a path to start the exit from the lost valley. Perhaps before the rock falls there was a path for getting the cattle up into the lost valley. Certainly now I can't see any way you would persuade cattle to clamber over some of the boulders. From my experience and it's current terrain a physical impossibility in most places. 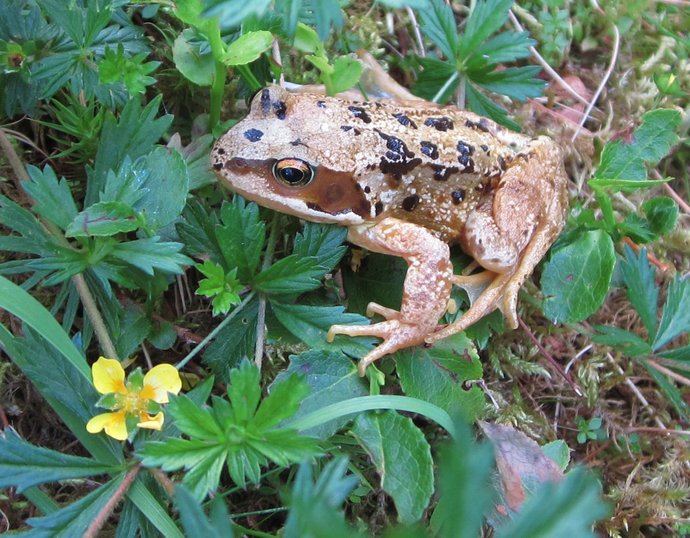 There's more secluded beauty on the way down the gorge 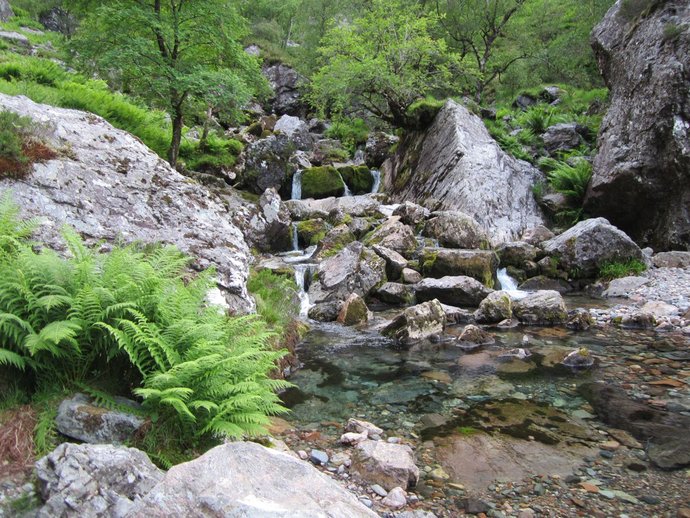 before emerging into the open again and site of the car park about a kilometer away.

A very scenic and interesting adventure, I'll be back!

Brilliant report and some fantastic pics especially nevis. However your eagles look more like ravens to me. Ravens are still pretty cool birds to see though!

Lovely pictures and report. This is one of my favourite hills and walks. I took a slightly different route up Stob Coire an Lochan and its interesting to see the lochans below from a different angle. I agree about the descent, I also found it very tricky. But the lost valley was a very good reward!

This is on my to do list, hopefully sooner rather than later