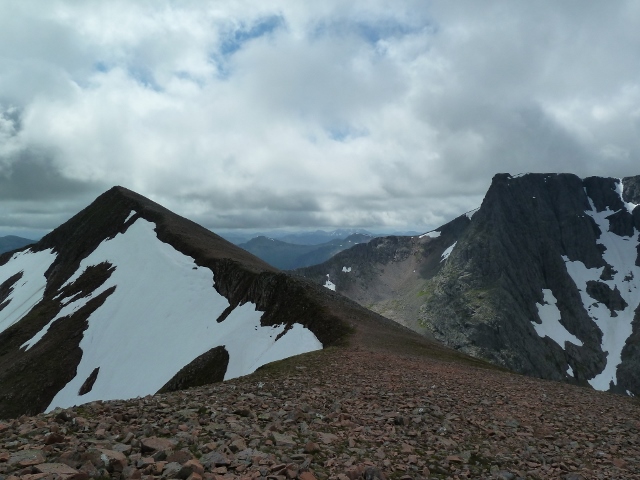 I haven't posted on WH before so I will do my best to upload pics!

Walking the Carn Mor Dearg (CMD) arete is something I've wanted to for a while, and seeing the weather forecast was good I headed up to the campsite at Glen Nevis.
The campsite is quite large and was fairly busy although in the camper-van field, (without hookups) it was quiet.

As predicted, the weather the next morning was looking good with clear skies and the cloud base well above the summits.

I set off up the mountain track at first, from the Youth Hostel, then up to the fork in the path at Lochan Meall an t-Suidhe.

From this point I followed the path around to the north face of the Ben and the first views of the CMD arete and ridge.

Across the Allt a' Mhuillinn I wasn't sure which was the best place to climb to the ridge but ascended very steep grassy slopes until I hit a stony path about 3/4 of the way up. I was glad to get to the ridge after about 600m of climbing

Then going first over Carn Dearg Meadhonach then Carn Mor Dearg itself I had great views of the arete and surrounding hills. I thought I'd better stop for some lunch before going onto the arete as I needed the energy.

There was no one in front of me on the arete and just three people that were behind me, so I set off over the massive blocks of granite. There's a path off to the side which I kept having to consciously avoid and stay on the top of the rocks.
It was good fun hopping over the large stones with good dry footholds.
I paused at the half way point which is also the lowest on the arete and took some more pics. There were great views over to Aonach Mor and Aonach Beag which were two hills I was hoping to climb this trip another day.

Getting to the end of the arete there is a nicely built round stone pillar and views across the arete back to Carn Mor Dearg and looking the opposite way, up to Ben Nevis.

The SMC guide book mentions 'a faint path' going up the rocks to the summit of Ben Nevis. I thought I was on it at first but then the path disappeared! So more scrambling up rocks for about 200m until I found the path near the top and suddenly the slope levelled out and I was at the summit plateau.

The summit was quite busy with people from all over the world it seemed, and after a quick bite I headed back down on the mountain track. On the way down I had a nice chat with a Scottish woman who had a sore knee and we talked about hills we had climbed and ones we would like to. After a while, I walked on, as she was walking slowly, and it only occurred to me later I should have offered her one of my trekking poles!

The path down was very busy but straight forward and in no time I was back at the campsite. I had done Ben Nevis once before, but walking over the CMD arete was a fantastic day out and one more munro to add to the list. cairn at the end of arete Great first post, with successful photo-upload! The CMD is definitely the best way up Ben Nevis. A good choice!

Well done on all counts, firstly for the report & photo's, secondly for doing the route

Silverhill wrote:Great first post, with successful photo-upload! The CMD is definitely the best way up Ben Nevis. A good choice!

Thanks for the comments, yes it sure is!

Fife Flyer wrote:Well done on all counts, firstly for the report & photo's, secondly for doing the route

Thanks again for the comments.

I've still got plenty left to choose from after this trip.

Did this route a couple of weeks before you and having done the tourist route the year before this was something else.We never saw anybody else until the last scramble upto the summit when we bumped into a couple of top Scottish guys,needless to say the summit was busy but all the reports we read about the walk before are all so true a brilliant way to go and a tired but well earned couple of pints in the Nevis inn with some big smiles after made it all worthwhile..nice one