The story of today's walk is not about individual feats of walking achievements (despite the distances covered). It's about firstly the pleasure of doing something different from the usual: walking with a large group of people I had never met before. Secondly it's also about returning to the Cairngorms and in some ways overcoming some sort of fear.

Not long after the reclassification which promoted Sgor an Lochan Uaine to the status of Munro, I went and climbed Devil's Point and Cairn Toul. I had taken a note of the new Munros when the news broke but I hadn't bothered to buy the new book. So when I prepared the route I missed the brand new Munro. This was more than 12 years ago. I was so distressed and discouraged, especially at the thought of having to return on my own on such a long trip, that I have since neglected the Cairngorms. I went back a few years ago to climb Derry Cairngorm and Beinn Mheadhoin with a couple of friends, but that wasn't a particularly pleasant or stress-free experience either. The point is that for me the Cairngorms are like moth-eaten lace - full of holes but of the wrong kind! I have ticked a few of the hills but there are still significant gaps in my tally. And I've got some sort of psychological blockage about them. So if I am to ever compleat, I have to overcome that.

By chance, last winter, a woman who runs with me in my local jogscotland group mentioned the existence of the outdoor programme offered by the Falkirk Community Trust (I live in Falkirk) and in particular she told me they organised ski touring trips. I checked their website and realised they offered a rich programme of outdoor activities - yes, ski touring, but also hillwalking and in particular various trips to Munros. So early in the spring I checked out their summer programme and this particular walk was on offer. I jumped at the occasion and what a great decision this was.

To further understand why I might be so pleasantly surprised at the correctness of my decision, I should add that I am not a club person (fish out of water would best describe how I feel in a club situation), nor am I particularly patient with large groups. So it was with some trepidation that I discovered that I was joining a group of 9 'clients', men and women, some of whom seemed even older than me

Martin was to be our guide and Craig our driver. Craig was still recovering from a kidney infection and wasn't sure he would do the whole circuit with us. He was dressed for it though...

We set off on the bus with the bikes and our gear. We stopped in Braemar where we shared toilet facilities with the runners about to undertake the run to Aviemore via the Lairigh Ghru... We crossed the start line to head for the Linn of Dee. We faffed about in the expensive car park to get all kitted out and launched ourselves on the tracks of the southern Cairngorms! With such a large group I expected serious straggling and I feared this would be an even longer day than the 10-12 hours I had worked out were necessary for the round trip. How wrong was I and I must give credit and declare my admiration for all my fellow walkers and our guides. It took us less than 2 hours to get to the big crossing of the Geldie burn and the ruined lodge and given the distance, the fact that some of us (including me) had not been out on bikes at all this year and the advanced ages of some of my companions, this was a remarkably speedy approach. Craig thought so anyway.

I think we were all glad to shift to walking mode. I was wearing padded shorts but they could not protect my sitting bones from saddle soreness. Before we undertook the ascent of the hills proper, we sat in the warm sun to eat lunch. We then struck west along the good path which skirts round Sgarsoch Bheag and constitutes the approach to the north ridge of Carn an Fhidhleir. After a good hour of fast walking, we reached its end. I took a compass bearing, just for the hell of it as it wasn't really needed, the visibility being very good and the way up unmistakable, and we hurled ourselves up through the heather. The heath was decorated with orchids and butterwort but not in the profusion that I encountered on Beinn Sgritheall in May or in the Loch Monar hills a couple of weekends ago.

We soon reached the first summit and were treated to fantastic views. The problem is that I couldn't easily identify what I was seeing through loss of familiarity with the area. We struggled to identify Beinn a'Ghlo properly, mistaking it for Carn an Righ

and the hills in the far distance (due south) baffled me completely - was I looking at the Glencoe hills or Ben Alder? Ben Alder and Creag Meagaidh as it happens.

The north wind was keeping things a bit cool on the summit of Carn an Fhidhleir so we set off again, once all the troupes had been gathered, and we followed Martin along the path which skirts round the broad south east ridge of the summit. Eventually we struck down to the bealach and after crossing a peat hag, we started our climb up to the summit of An Sgarsoch. This was reasonably straightforward. There is a faint path here and there.

As happens with large groups, we troubled the quiet moment of contemplation of a couple who were seated on the sheltered side of the large cairn and we must have chased them away by taking lots of pictures and being fairly loud! Hopefully we were not obnoxious though. Martin distributed biscuits made by his wife (thank you! they were delicious

and nobody refused) and then we followed after the couple down the hill. We avoided the large snow patch which was still hanging on by a crevasse to the overhang just off the summit, followed the burn down to the path which skirts round Sgarsoch Bheag and rejoined the good track that we followed 5 hours earlier. There, Craig was waiting for us, having guarded the bikes and the gear for all that time.

After adjustments in clothing, disappearances for comfort breaks and a quick snack, we got back on the bikes, remembering all about saddle soreness in the process, and set off towards our the first fording of the return trip. I decided to remove my boots altogether, lash them to my rucksack and cycle in sandals. I was slightly nervous, not of getting my feet wet, in fact I was relishing the prospect, but of cycling over stones and small boulders with toes exposed. I gave it a go anyway. I have to say that this was a great ploy - I simply paddled through each ford without a care for wet feet and therefore without having to walk precariously over the boulders whilst guiding the bike. I could just rush through and keep my feet cool all the while. I did find the cycle back really long I have to say. Reaching White Bridge was a relief and whilst the track back along the Dee to the car park is better, one still has to endure several sections of bum-hurting corrugations. So the softer surface of the last 500 yards didn't come too soon!

The last stretch, on the tarmac of the road that leads into the car park, has a slight incline and one of my female companions overtook me, crossing the finish a few seconds ahead of me! Respect. Only 15 minutes separated the first in from the last in, a remarkable homogeneity of fitness and endurance in such a large group and I take my hat off to all my companions for such a stout effort - job well done! and my last Munro adventure before I fly off to France and Switzerland for a nice break.

The bikes were duly loaded on the trailer, the headnets came out to ward off the midges, more gear adjusted, bags stored away at the back of the van and eventually at around 8pm we left the car park for the journey back, with a stop at the park & ride just off the Brogden roundabout in Perth, where we said goodbye to two of our companions who returned to Edinburgh in their City Car, and then onward to Falkirk, where we arrived at around 10.20.

A long day but well worth it, with some great companions. I wonder who will be with me on the trip to do the traverse of the Cuillin at the end of September... I also look forward to returning to the Cairngorms to fill the gaps and I am sorry I will miss the trip to Ben Avon and Beinn a'Bhuird (I will be on holiday) later this month.

For the record, the chippy in Braemar appears to be closed. 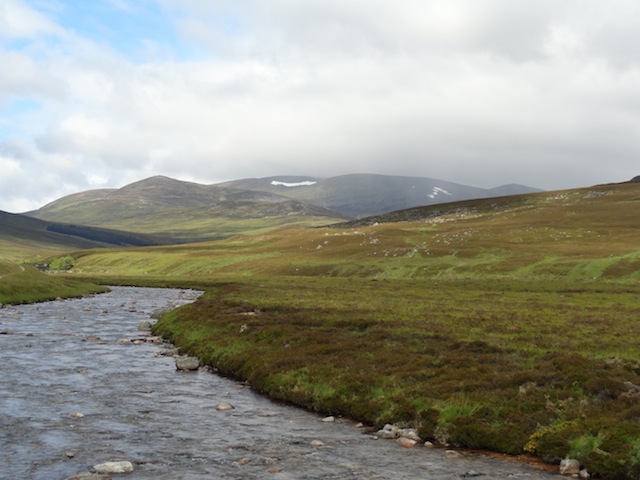 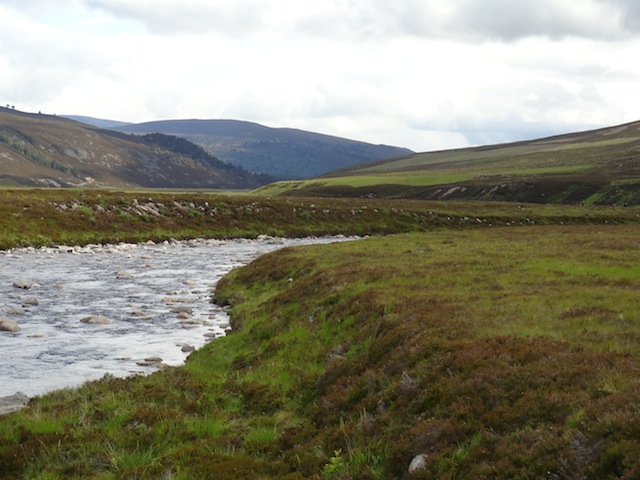 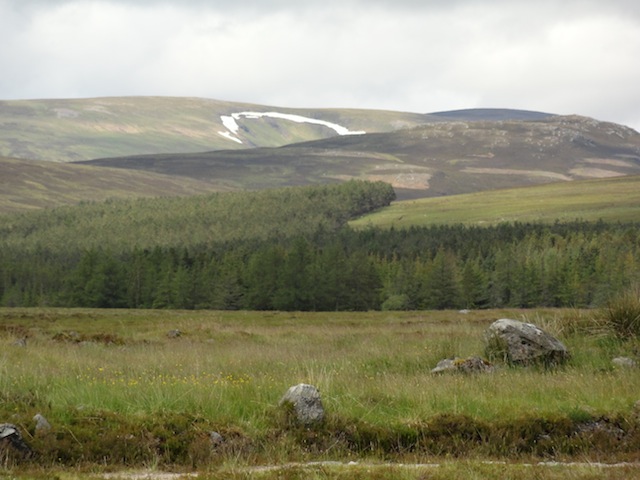 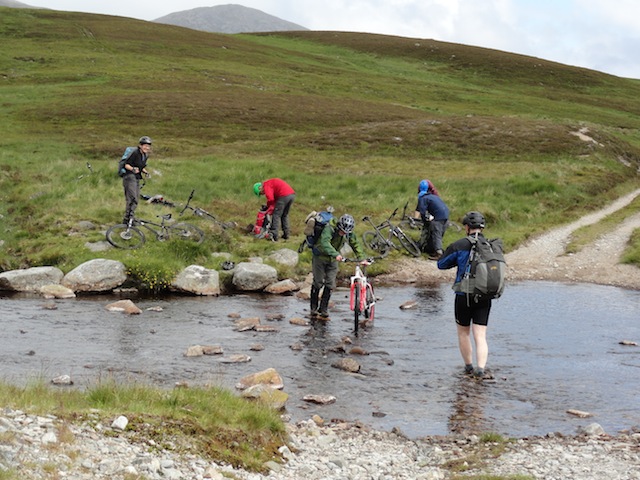 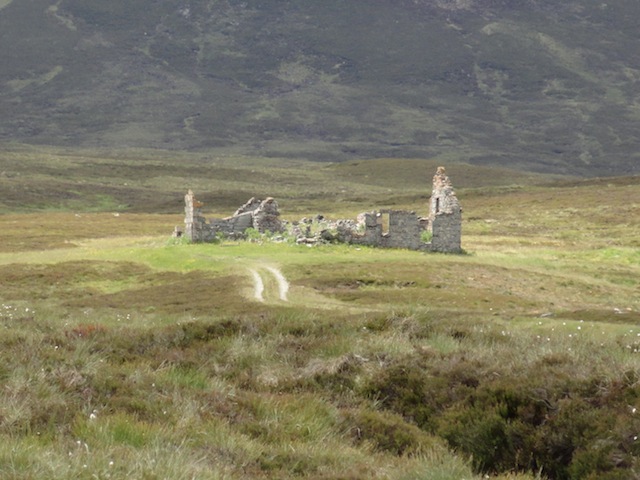 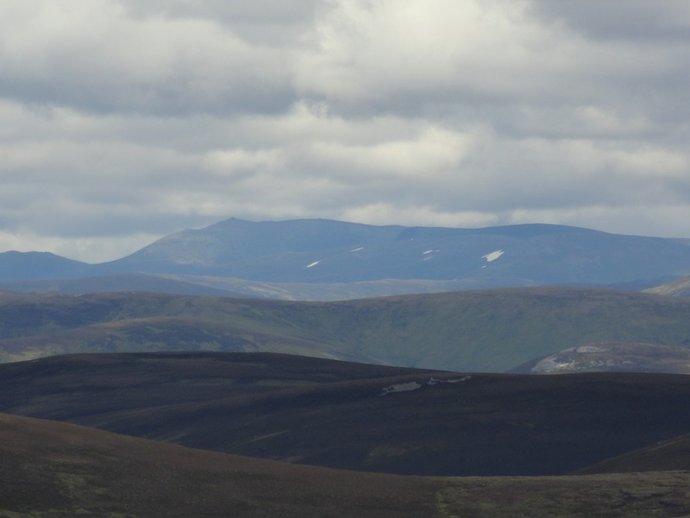 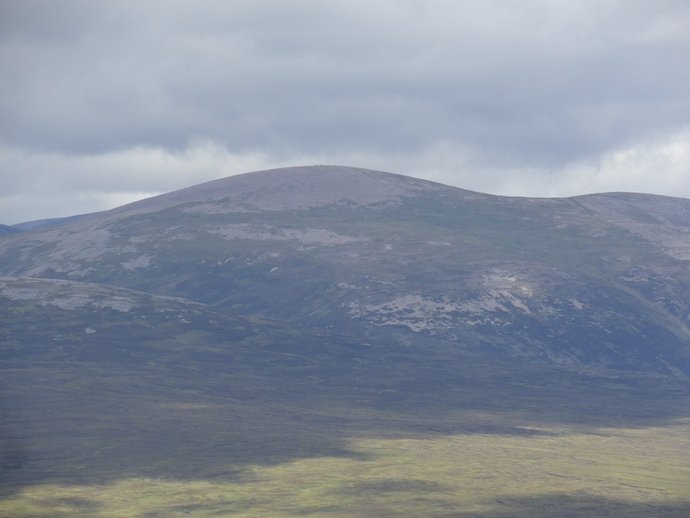 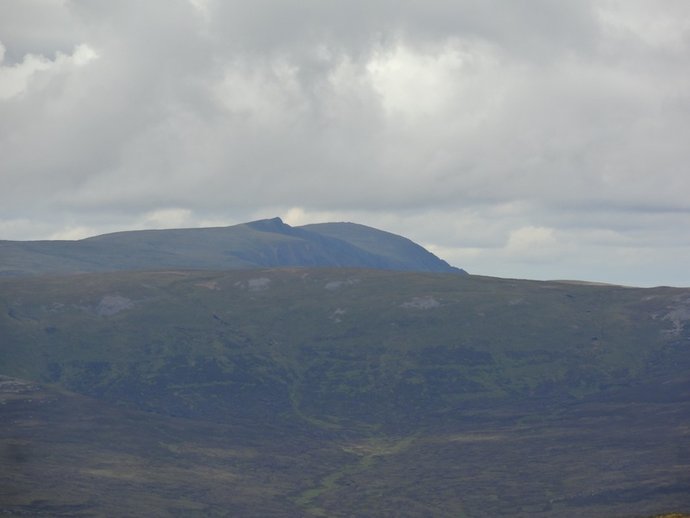 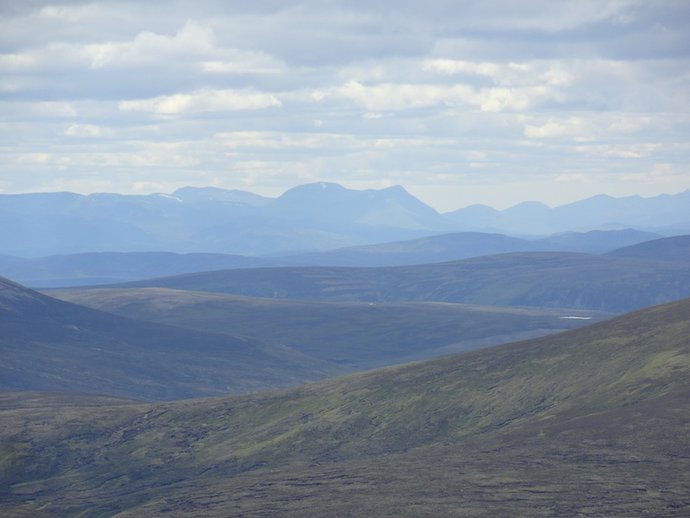 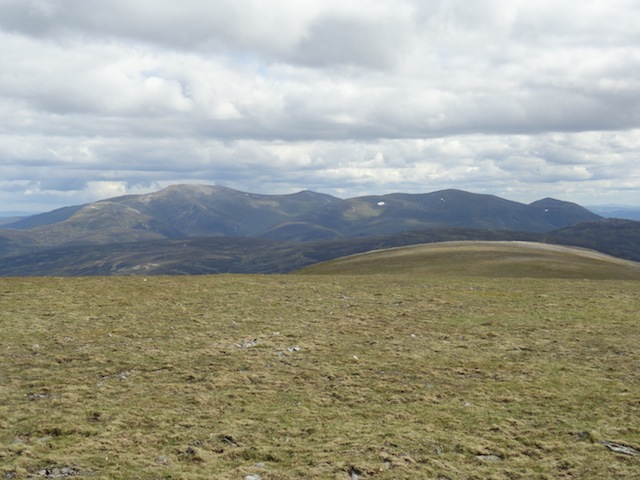 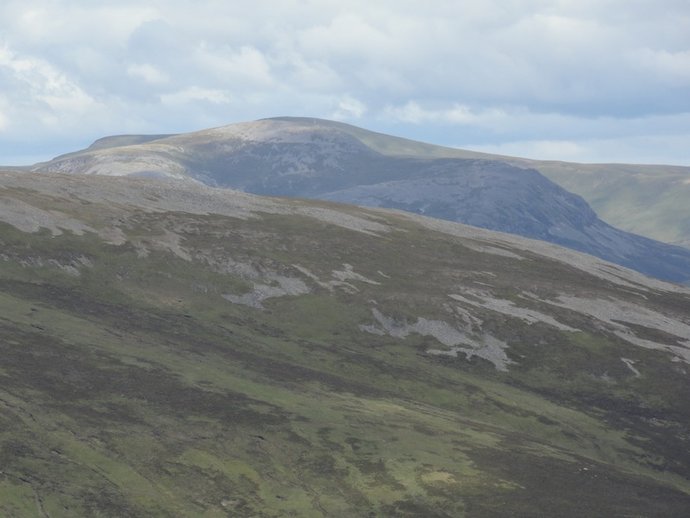 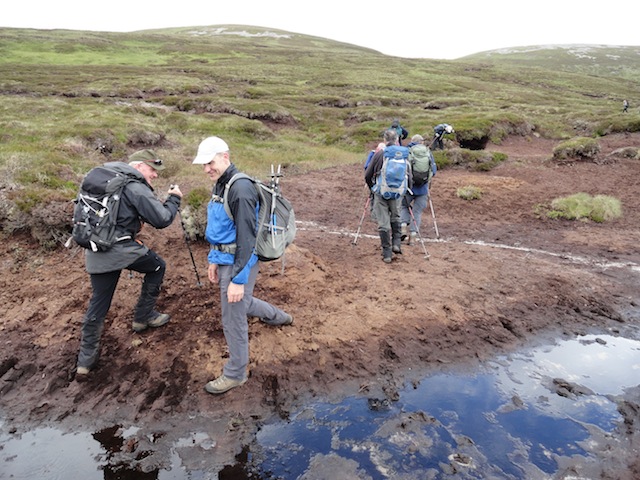 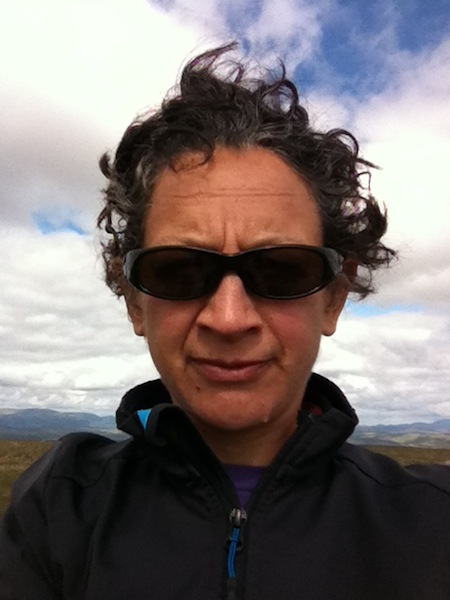 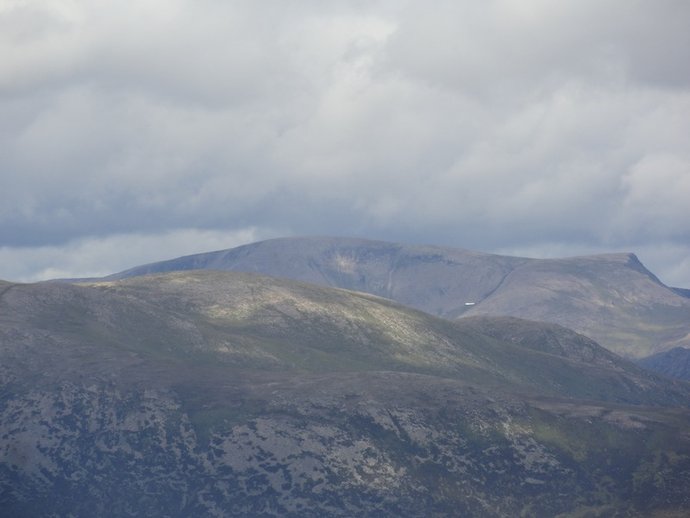 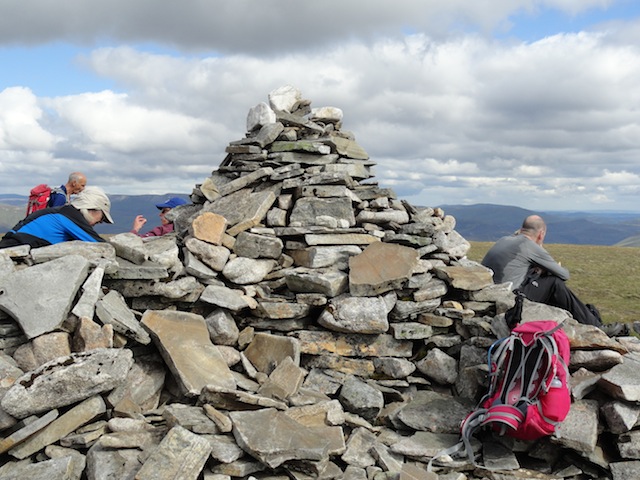 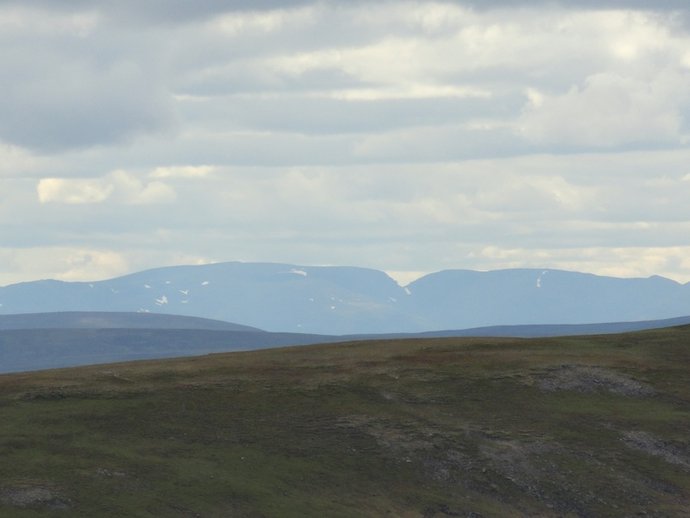 Very well written report, enjoyed reading that! So that’s the hurdle of newbie group walking overcome and by the sounds of it your Cairngorms mental blockage is on its way out too! Well done, and of course also for the considerable distance covered and 2 munros ticked off.

Sounds like you found a good group to walk with

Only a couple of weeks before I hit the Cairngorms, not been up that way for 20 years

You'll also need a bike and good cycling shorts with extra padding! I'll be aiming to finish them in June next year.

Users browsing this forum: A Langford, Malmilne, PeterLewis and 34 guests