Ben Lui (My nemesis) and his brothers

Ben Lui (My nemesis) and his brothers

Ben_Lui__Beinn_a__Chleibh__Ben_Oss_and_Beinn_Dubhchraig.gpx Open full screen  NB: Walkhighlands is not responsible for the accuracy of gpx files in users posts

I'd had three previous attempts at Ben Lui, all of which ended in failure. Once the dog gave up on me (yet had the energy to chase deer on the way back down), once the weather beat me and my final attempt my common sense left me and I decided to try to climb up the back of Coire Gaothach resulting in me clinging onto a vertical rockface and having to slide, fall and bounce back down to the base of the Coire. The wife was less than pleased with me when my bruised and battered body returned that evening!

For these reasons I saw Lui as my nemesis yet formulated a plan to summit all 4 of the Munros in the group in one go. I picked up my two mates from Glasgow and headed up Loch Lomond to the car park at Dalrigh. Blazing sunshine in Glasgow but as I got closer to my nemesis it started to cloud over then rain. That at least helped to clear the midges from the car that I had been taking out on the journey. Apparently their mates had revenge on their mind as when we parked and opened the doors we were instantly attacked by millions of the wee buggers. Quick change, locked the car (with a few thousand midges trapped inside which I would regret later) and headed off along the path by the side of River Cononish to the base of Lui. Didn't realise this was a 7km walk and took about and hour and a quarter.

The weather was still overcast and the cloud was hanging just above the floor of Coire Gaothach. Hence the reason for no pictures yet but bear with me...... The walk up to the Coire was easy enough and we followed the path in until the little cairn on the right signaled where the path turned right to ascend out the Coire onto the summit ridge. Once on the ridge we got hit by the wind and rain which made it so cold we had to resort to woolly hat and gloves on mid summers day! Made the summit, couldn't see more than 10m so quickly left, retraced our steps a bit and turned left to go down the western side of Ben Lui towards Beinn a'Chleibh. This was easily achieved as it is mostly downhill apart from a short climb up to the summit. Got to say if it wasn't for Lui I don't know why you'd bother with this hill. The cloud was starting to break and we were meeting some people who had set off from A85 in Glen Lochy.

Two Munros down without too much effort. I knew my mates weren't quite the mountain goat that I am but they agreed at this point to at least try for Ben Oss. I looked at the GPS waypoints I'd downloaded which directed us back up to the summit of Ben Lui then down it's south eastern flank to circumnavigate the very deep Coire Laoigh between Lui and Oss then climb the southern side of Ben Oss to the summit. As the cloud was still hanging over Lui we looked at the map and saw the southern side of Lui was relatively gently sloped with few obstacles so decided to summit it again was a waste of time and energy and simply traversed round it following (roughly) the 850m contour line. 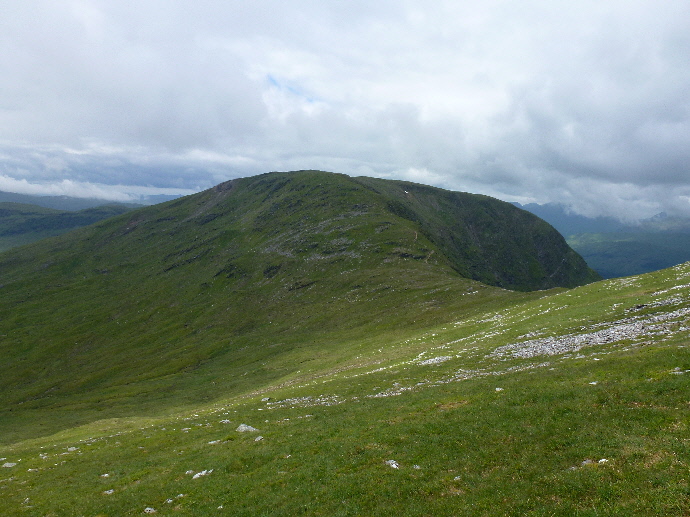 This was easy on grassy slopes and we quickly arrived on the western side of Coire Laoigh. A route one approach down and up the Coire was out of the question as it is very steep and deep so we had to follow the ridge round the Coire (no path but easy navigation) and spotted a path leading up the southern side of Ben Oss just as the ridge started to climb to the summit. We had a lunch break here as it gave us shelter from the wind then set off up to the summit of Oss. Again quite straighforward walking. The path was on and off but you have little option but to keep following the edge of the Coire up the mountain. This is where I turned from a Mountain Goat into a Mountain Doctor. Despite having had lunch one of my mates suddenly lost his energy, turned very pale, felt sick and was struggling to get up the hill. He soldiered on to the summit of Oss then we dropped down towards the Bealach Buidhe to again shelter from the wind. He was really struggling and I realised the only thing it could be was low blood sugar as he had eaten and drank plenty. Fortunately I had packed extra fruit bars so found the two with the highest sugar content and told him to eat both no matter how sick he felt. 10 mins later he had went from "I can't do any more" to "Lets go get the fourth!" Now the cloud had lifted we were finally rewarded with some views although these pictures of Ben Lui were the only time that summit was clear all day. View of some hills :)

The panorama from Ben Oss of Beinn Dubhchraig, Loch Oss and beyond was stunning.

Three bagged, one recovered mate and one Munro to go. My other mate was now saying he was going to leave the fourth as he was getting tired. I may have been a bit devious here and told him that was fine, we'd get to where the path to the car met the main path, we'd leave him there and the two of us would summit Dubhchraig. I was devious because to get to the path to the car we had to pretty much climb to within 150m of the summit of Dubhchraig and once he realised this he came up to the summit so we all bagged the four. At the summit of Beinn Dubhchraig

Quite an achievement, now to get back to the car. We retraced our steps down Dubhchraig and at about the 900m contour turned right and started heading north east on the path that followed the Allt Coire Dubhchraig. What a walk out this was! It went on for ages and we never seemed to get any closer to the car. To be fair we were all tired now and our feet were sore. I'd hate to try this walk in the wet or after sustained rainfall as once we got into the forest (very scenic and atmospheric) the ground was still very boggy in places and that was after a couple of weeks of dry, hot weather.

We followed the path all the way and you eventually come to where the River Cononish meets the Allt Gleann Auchreoch. We had to cross the Allt to regain the path which would take us over the railway line. There is a footbridge across the Allt marked on the map. If you want to try what remains of the footbridge I'd make sure you have adequate life insurance first. Instead we crossed the Allt using the stones although I could see this being a wet foot moment if it was in spate. We walked across the field and picked up what is actually a farm track which takes you over the railway and seemingly away from the car park. Stick with it as you come to a junction where you can turn left and cross the River Cononish via the bridge (to the right of where it says Drochaird Bhan on the OS map) and follow this road back to the car park.

An epic walk of almost 27km, taking in four Munros and some stunning views.

Now back to those midges. Amazingly a lot of the wee buggers had survived in the car so after getting a revenge attack in for being trapped in the car they proceeded to continue to attack us all the way to Crianlarich despite me driving at 60mph (ish) with the windows down and the fans on full! Only then were we rid of them. Welcome to western Scotland! lol

Re: Ben Lui (My nemesis) and his brothers

well done thats a bit of a walk

i have driven by these hills so many times on my way up to glen coe,i think its about time i got them done.good report and pics........p.s,its loch lomond