Meall a’ Bhuachaille from the Glenmore Lodge

Meall a’ Bhuachaille from the Glenmore Lodge


Beneath my feet each stone glitters with a thousand tiny flecks. Clive tells me it is silica but to me it is pure gold, and each tiny shard is worth a million pounds. We are climbing Meall a’ Bhuachaille from the Glenmore Lodge in the Cairngorms. At 810m, this may seem tame to some, suitable only for toddlers and elderly gentlemen in wheelchairs, but I have come to realise, as the years advance, that 'a good walk' should be measured not in altitude or distance covered, but in terms of happiness gained, and sense of achievement. And so we climb, leaving behind the coarse, ochre-coloured sands of Loch Morlich (Who'd have thought to find a beach nestled here among the mountains?), and stepping through grasses where the stately dragon fly flits and darts, towards the summit. At each twist and turn of the track, a new surprising glimpse excites - a line of snowy summits; a wind farm whose whirring turbines scatter the hillside; and Aviemore, home of intrepid campers, Tesco and burger bars, in the glen. Looking south-east from the summit

The Forestry Commission have made life easy for us all, arranging rocks in steps so that no one may be caught out by a touch of scree, or slippery slope. And lest the windy summit proves too much, there is a rocky shelter, furnished with nice flat stones for seating. A young couple have arrived before us, but they leap up as we arrive, to offer us their seats. Walkers are so polite we find! 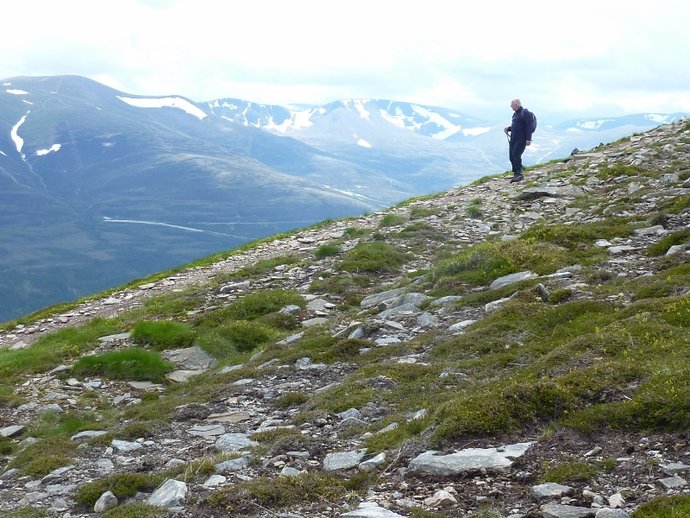 Like a rocky motorway, from here the downward path is unmistakable. It profiles round the summit before taking the walker sometimes gently, sometimes steeply to the Ryvoan Bothy. In the hazy afternoon sunshine, the wrinkled grey surrounding hills remind me of sleeping elephants! Clive's knees protest unhappily as he descends the steeper parts, and it is as I pause to wait for him that I hear a far off sound. I think, at first, a bellowing bull is loose, or perhaps a rutting stag. But no! It is a party of exuberant teens approaching, as yet unschooled in joys of silent walking. They have certainly been taught, though, about being courteous to other walkers, for as each one passes, (s)he gives a cheery greeting and thanks us for stepping aside. I begin to feel like the Queen, who must appear to be delighted as she acknowledges and replies a thousand times a day! But I am glad to see them out in the countryside, and happy, even in the rain. And as the strains of the latest pop song finally recede, and the heavens release an icy deluge, we find we've reached the bothy. How fortunate is that! Sandwiches are eaten, and a steamy warmth descends as we enter the silence of the Ryvoan Pass, a nature reserve. There are still plenty of moorland plants here, (Lucky white heather, lady?), and baby conifers, sporting tiny new shoots of emerald. But others too - shiny golden buttercups, and man-eating (or perhaps they're only insect-eating) bog-loving plants. 'Hello Mr Toad' calls Clive, from some way back! The Green Lochan is all it's 'cracked up to be'. Surrounded by fairy-like branches, and ringed by a golden beach, it reflects an eerie greenish light. Beyond the lochan, paths diverge. Clive's knees make the wrong choice, as far as they are concerned, deciding to follow the 'blue' route in the guide book, (far too many steps!) But the rest of us - all of me, and most of Clive - are entranced as it meanders over the roots of 'granny trees' (that's what the Forestry Commission calls them), slipping between shadow and sunlight, affording tantalizing glimpses of the stream below, and emerging only as it seems it never ends, to forest track. A well-placed bench inspires the painful knees to shout: 'Hooray!'

And the rest is easy! Grey buildings and the glistening car parks beckon us back to reality. The day is done, and we are ‘done in’! But my million pound, glistening shard of rock nestles in my pocket, and as two ‘oldies’ gratefully kick off their boots and sink onto the sizzling car seats, they have to acknowledge that the day has been ‘gold’, yes, ‘pure gold’!