Calves and Kreels and How to avoid the deep bogs

Calves and Kreels and How to avoid the deep bogs


The plan for today was to be Ben Lui and the other one but the "incessant rain" promised by MWIS in the Friday almost caused a rescheduling elsewhere (Creise) in case we faced a river in spate. Thankfully the rain wasn't so bad and we did Ben Lui as planned.

Starting from the car park we almost instantly crossed the river but not before checking out slightly farther West first but to us it seemed deeper and we trotted back to our starting point. Apart from slightly wet sock tops the crossing passed without incident even if it was a slow and deliberate one. However once on the other side, the grass, which was knee high, was saturated in dew or overnight rain and in about 10 seconds my trousers were soaked - so much for staying dry crossing the river! Wish I'd brought my gaiters after all....

After we'd dealt with getting to the other side of the railway we set off at a fair pace up the hill and soon encountered the deep muddy bogs which captured our feet and ankles: the stink was awful but the continuing wet grass and wet overhanging trees soon washed off any muck. Thankfully it remained a bit cool and cloudy for our upward haul through the forest and the midges were kept at bay. But we spotted this wee chap resting in the sun. Forbes, my climbing buddy for the day, thankfully spotted the tiny cairn that I had missed Forbes ecstatic at having found the cairn!

- it's no wonder people miss it - and we set off down to the river where an exciting river crossing lay in store for us using a handily strung up piece of rope. Whoever thought about that - Thanks! From thereon the mud is intermittent and the climb continues steadily until you emerge at a bridge over the Fionn Choire and a forest road that wasn't on my WH map I'd downloaded (not checked latest OS yet). Stopped for breather just as the hillsides come into view and then on and up to the gate through into the amphitheatre of Ben Lui's North facing corry. Although the forest track is not THAT bad, it is a bit claustrophobic and arriving into the huge open space at the base of the two mountains was exhilirating, reinforcing why we do this crazy stuff. Suffering smelly mud, deep bogs and midges is a small price to pay for the splendour of the world.

The midges were out in force and another application of SSS was required, before we moved on heading up parallel to the fence and following a faint path which lasted till we were almost half way up. The sun broke through the clouds from time to time and sweat began to drip constantly from my forehead as the morning (it was only about 10am) got hotter and hotter. The views looking West were just stunning although the cloud which hovered over the Cruachan massif remained there for most of the day. Not long after we got our first view of the ridge since starting up on the grass and with the sun behind it, it looked eerily alien As we neared the top and the right turn to the ridge, we decided to cut out the first lump of rock and head for the gap between that and the second where we took in amazing views East to Tyndrum and Bridge of Orchy. and across to what I think was Beinn Bhuidhe Cloud was intermittently coming and going as was the biting cold wind and before long we headed on up to the top. It was an easy 100m of ascent as we now had a rocky path which had a few interesting scrambly bits but nothing challenging at all. It felt good to get a hands on period of time after the dull climb up through grass. I had forgotten my Baseball cap that I usually use and Forbes loaned me his bunnet which reluctantly I accepted "it'll make me look like an old man" is what I said and felt. I'll let you decide! We immediately bypassed the first cairn which turned out to be the summit and headed for the bigger, farther away one which seemed higher. It was good call as there was more sitting down space and it had a more pointy feel about it. The bigger one or this one, the one we passed first? It was here we met our first people of the day. Soon, along came a chap from Gloucester who was up on holiday and had this week alone done 35 munros and was planning to do all 4 today. Put me to shame having taken 3 years to reach 37 (munros that is). After a long lunch, we set off down the hill to Beinn a'Chleibh. The path was good - if steep - and well made but its a long way down and we reached the bealach at 12.20. looking back up the path down Ben Lui

A short rest was taken and then we powered up the remaining 130 metres in about 20 minutes or so and visited (again) two cairns before taking lunch. my shepherd pose by the summit cairn The weather was now changing by the second - but it hadn't yet rained - and the arrival of lower black clouds and a biting cold wind were enough to get us moving at 13.05.

We walked pretty much non stop down although we lost the path soon after hitting the grass again but we knew where we were going and just kept heading for the gate in the deer fence and shortly found the path again and arrived back at the gate in around an hour. Two young guys arrived through the gate and after a brief chat they headed on up Ben Lui. The sun was back out again but this time no midges so after filling our water bottles with the cold clear water, headed down into the forest of doom. But something was bothering me - their trouser bottoms were bog free: ours were mud stained. We discussed how it were possible that they could have missed the boggy bit and the best we could come up with was that they had changed their trousers before exiting the forest. However it seemed not so much as unlikely but lets put it this way, the chances of winning the lottery would be significantly lower!

Whether the sun had begun to dry out the ground a little or we just felt better going down, generally it didn't seem quite so bad and we eventually arrived at the bog and at once spotted the answer to the mud problem: there was a by pass route through the forest we had missed on the way up, so I've included a photo of the bog 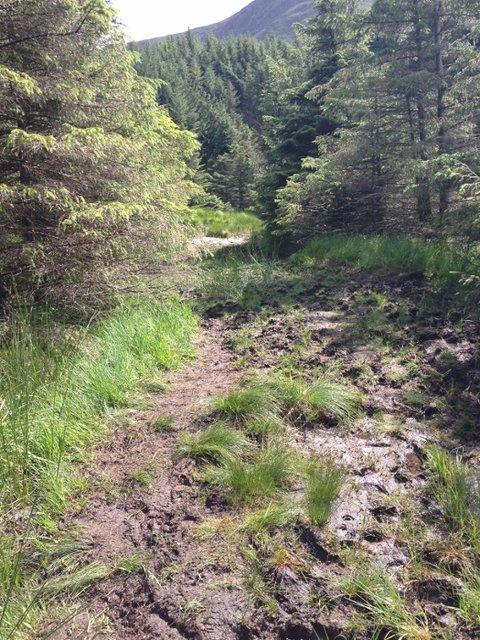 and the bypass looking at it as if on the way up. . An easy walk back to the rope crossing 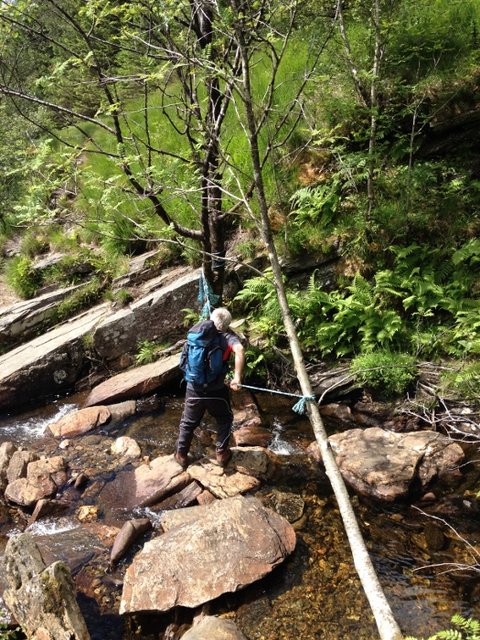 In a few short minutes we were back at the river and crossed it caring nothing for wet feet and ironically ended up with nothing worse than wet sock tops. Typical!

Thanks for a great report and pictures - they certainly kept me clear of the worst of the bogs which following your route weren't too bad at all - as a bonus I managed the river crossing booted up as well, mind you i got a strange look from two people who were just putting there socks and boots back on, having paddled!

Glad it was helpful. What i found really difficult when i started walking only about three years ago was knowing what to expect so I try to give some clues as best I can.

Hope you enjoyed your day auldal

Great report and I agree that you give lots of 'pointers' for people who have yet to do the hills. I get so excited about the views that I forget to take photos of important things like cairns and paths