S and I have been looking forward to this for a couple of years. We were hoping some of our walking friends would come too but after reading the description of the walk and some walk reports on here they were put off. So only S and me, but that meant we were free to camp, so all ok.
We chose this time of year for the daylight hours and hopefully the midges wouldn't be in full swing yet - that worked - they were not too bad at all.
Camping let us get an early start too. It still took ages to get going, what with cooking bacon rolls and getting tea started. I mean evening meal when I say tea. Sis, mrssanta on here, made a delicious stew in an improvised straw box and a (real) Dutch oven on our last expedition together and I wanted to have a go at that. So I used an old cast iron pot and lid, and copied her box with newspaper idea, and got the stew simmering before we left, wrapped it up all cosy in the box, and left it in the tent. (No gas burning at this point, just stewing in it's residual heat.) That was something to think about and spur us on when the leg wobble got too much up the hill!
We decided to do the road bit at the beginning of the walk so we wouldn't have to do the hot feet on tarmac thing at the end, and went along the lovely path beside the south side of the river until the footbridge back across to the road. The road was a really lovely walk, despite it being road, and the place was littered with wild campers. (Just jealous of the lovely spots they had found.) The cloud base was still fairly low. On from there to the path that goes alongside and above the gorge. There must have been quite a decent dry spell because the water was very low through the gorge but that meant the amazing water sculpted rock was on show. Soon the path arrived at the tranquil Steall meadows which is basically (even in this dry weather) a sponge with the river and a path running through it. Some people had found a dry spot to put tents up and I was a bit jealous. (We were camping at the Official Campsite of Glen Nevis.)
So we got to the steel bridge, and even though the stepping stones were invitingly high, we had to go across the bridge. You have to don't you? First you have to get onto it. If you can't do that then you probably shouldn't go any further anyway

It was ok at first, but then by 1/4 of the way across I thought about turning round and going back. Then I realised I'd have to take one of my hands off to do that and thought better of it. By 1/2 way over, I was doing ok, 3/4 I'd had enough, and I was glad to get to the other bank, specially as S was coming behind me and the wobble had changed it's pattern, and was a bit more random.
Crossing under the waterfall was easy with the falls low. looking up the falls

I still managed to go in up to my ankles in the bog before heading up the steep path. Having just given my boots a good clean and re-treatment, they came out sparkling.

The path uphill is a slog, up, up seems to go on for ever but there were some pretty flowers to keep us amused. We had plenty of micro-stops to eat something, drink something, look at the view opening up, check on the cloud level, anything in fact! My fingers looked like sausages and were feeling very uncomfortable, especially as my rings were feeling too tight. No chance of getting them off. I walked along with my hands in the air for a while, but that was pretty uncomfortable to keep up. By the time we got to the ridge it was over 2 hours since we started. We didn't know how long we'd take on the ridge, and we wondered if we were being too slow...
For the moment the cloud lifted off the tops. back down into the Steall meadow. Ben Nevis still in thick cloud

before hitting the summit, a peach of a flower, a mini dogwood, I think. At last we reached the first summit, An Gearanach, the first Munroe of the day, then we kept on straight away to tackle An Garbhanach. I don't remember the detail of this scrambly bit but it was a challenge, in a good way. I think this is the summit. 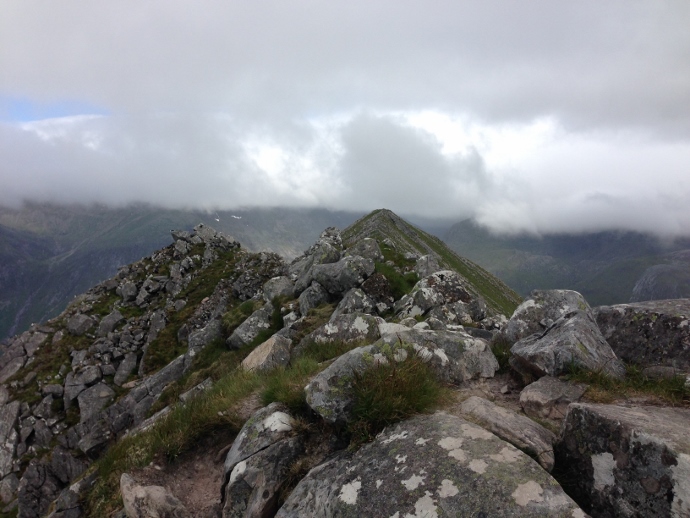 We had pretty wobbly legs by this time. Would they last the day? And would my fingers be strangled by my rings by the time we finished?
So onward and up to Stob Coire a' Chairn, when the cloud had lifted enough to give good views back to the first part of the ring. and over to the Eastern Mamores. me on top of Stob Coire a'Chairn

That was Munroe number 2. I think this was where we had a mini lunch. My fingers cooled down and got a bit less swollen, thank goodness.
The next bit was some nice arêtes, but not scary and not too steep, really nice walking, up onto Am Bodach. It was looking good back towards the first hills now. And onwards to Scurr an Iubhair, and now even Scar and Maim, oops, I mean Sgurr a' Mhaim was up out of the cloud. Coming of Am Bodach was lovely walking, then at some point, I can't remember exactly where, we came to the brow of a wee hill and with a sharp right turn, there was a sort of heart in the mouth moment, when the path narrowed right down with steep falls on both sides. Gulp! All you can do, by that time in the day is swallow and get on with it! It's a long way back to retrace your steps. For the first bit of the Devil's ridge there's nothing on either side. Airy is the word, but for a lot of it there's a low bank on at least one side of the path and that makes it all ok. The nick in the ridge filled with random boulders proved too much for us. It looks like there's an alternative path either to the left or the right, but as I went down the left one to explore, a man who'd caught up with us while we pondered went down the right one, only to come back when he couldn't find a way back up to the ridge on the other side.
The left path was fine. so that was another bit negotiated.

Then there was another downward bit further on where the same man threw his rucksack down in front of him at a tricky bit and it nearly didn't stop! We were shouting 'Stop! Stop! now would be good!' and at last it did. Phew! There was definitely a feeling of elation in the air now. The biggest hurdles passed and the final summit in sight!
We promised ourselves a brew when we got to the summit of Sgurr a' Mhaim. And we started planning our next hills... At last our first very welcome cup of tea of the day while we sat in the shelter of the summit
and took in the views all around. (Some of the views are upside down and sideways on - if anyone can advise me about that it would be gratefully received!) down Loch Linnhe to Mull and Ben More way down to the Paps of Jura and Ben Nevis released from the clouds at last

Amazing visibility!
I had thought that the hard bits of the day were over, but I wasn't counting on my legs being completely at the end of their tether. The first bit down the scree was fine, but then the legs starting acting wooden, unreliable and uncontrollable. It was the worst downhill ever. I usually really enjoy that bit, but I couldn't get off the mountain soon enough.
There was a surreal moment up on the scree when a yellow butterfly want aimlessly past, at about 900m. Brimstone? What else could it have been? but everything about that was wrong... I've still no idea.
I've never been so happy to see the car without having to walk along the road.
And the stew only needed simmering for about 10 minutes and it was yummy. Thanks mrssanta!
And serious leg pain the next day. (We did Pap of Glencoe, thinking it might help - open verdict on that!)
My fingers are still on though. Must remember to take rings off before big walks in the future.

Reminded me of my trip there last year, fabulous walk

Brilliant stuff !! your pictures are great even if I did have to stand on my head!

"""My fingers looked like sausages and were feeling very uncomfortable, especially as my rings were feeling too tight. No chance of getting them off. I walked along with my hands in the air for a while, but that was pretty uncomfortable to keep up."""

this is one of the problems that poles help with! you see you keep your hands up more rather than swinging them about. Who'd have thought it!
glad your stew turned out well. you always made better stew than me anyway! mmm