High above Loch Laggan are 5 Munros which are mostly climbed in 2 outings. I had always fancied to combine the 5, but without a second car the 8 mile walk back to the start, was somehow less than appealing. Luckily my friend Lynne who I had met last year, was free and after sending her the route she agreed that a round of 5 sounded fab indeed.

to Old Danesian for recommending it in one of his reports) and arranged to meet Lynne at 8am. The day was supposed to be sunny, but the weather god had other things in mind.

When I got up, low cloud covered the sky and it was raining. Not amused

(she had left her house in glorious sunshine) She wasn't the happiest bunny either.

Checking the sky above, neither of us was sure if we fancied a 11 h walk in the rain, but as we had the 2 cars we decided to park at the opposite sites and with the option to take a rain check after 3 Munros.

By the time we got to the huge car park, we were impressed.

It made such a change from the tiny lay-bys in which you try to squeeze your car into. Setting off the weather still had not improved, but we chatted so much that we did not notice the rain, or the path up the hill we walked by…

The path we had followed was great, but when Lynne suddenly stopped and told me that there surely should be a path up the hill,

we checked GPS and map and realized we had walked far too far.

Having done that god know how many times my own, I knew the only way was straight up.

, but followed my steps when I lead the way through thick heather.
Climbing higher and higher we were soon in thigh deep wet bracken. Looking back and seeing her, I burst out laughing

...the situation I got us in was too funny....although I don't think she was as amused (sorry Lynne) 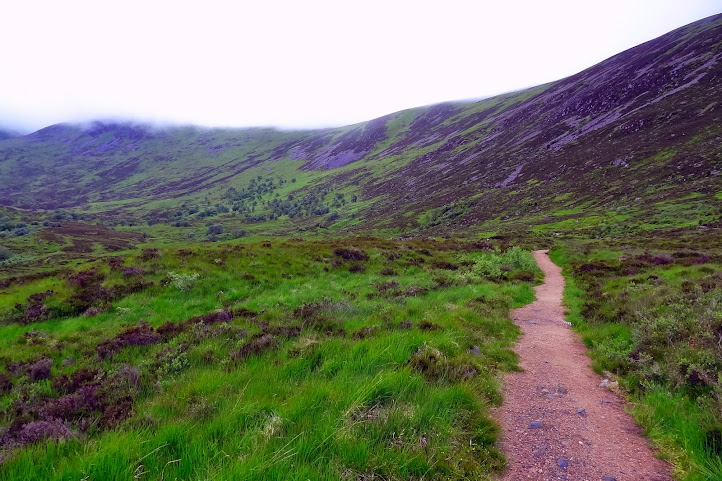 The path...easy to see how your feet want to stay on this! 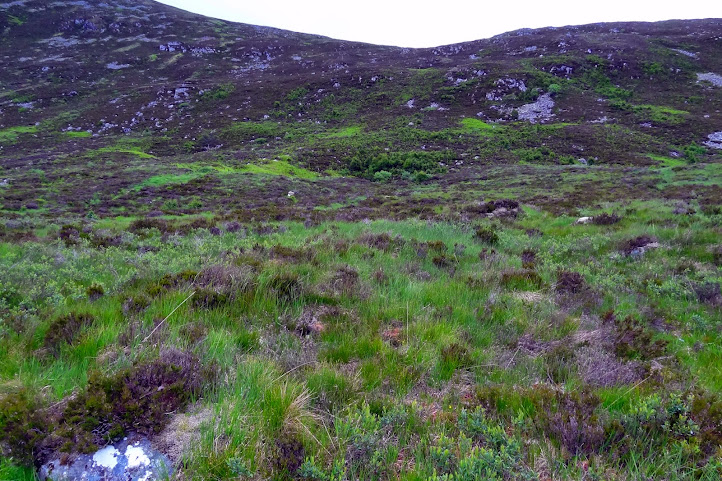 The climb up...did not look too bad from the ground 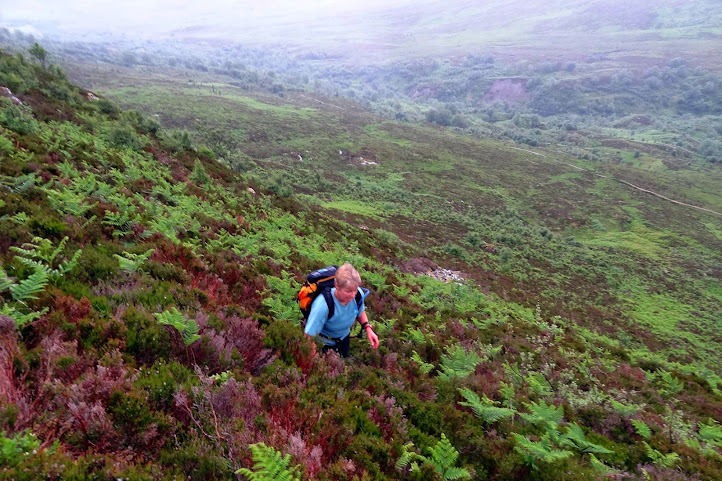 Lynne on the way up...quite a bit steeper than I thought

Luckily we got through it and soon discovered a path further up the hill. The higher we climbed the thicker the cloud got and only with the help of the GPS we managed to find the cairn on the flat summit. The first Munro Carn Liath was climbed. It was cold and wet and not wanting to stay long we moved on. I am guessing our silent prayers got answered when the cloud slowly started to lift. Bit by bit the countryside came into view and lovely views (anything is lovely after walking in a cloud) soon exposed the mountains around us. 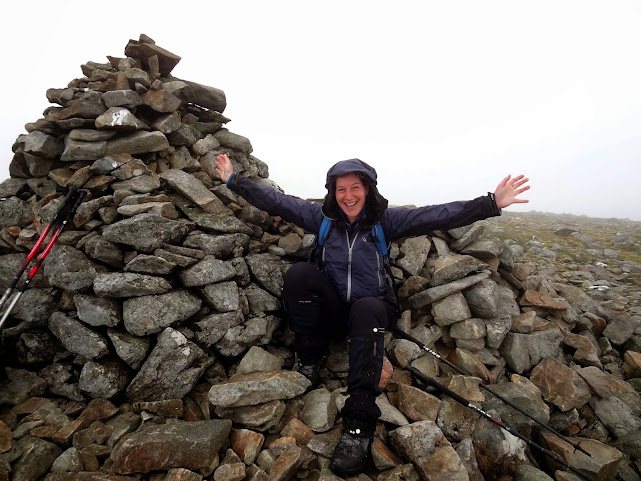 Me at the cairn...weather was still rubbish 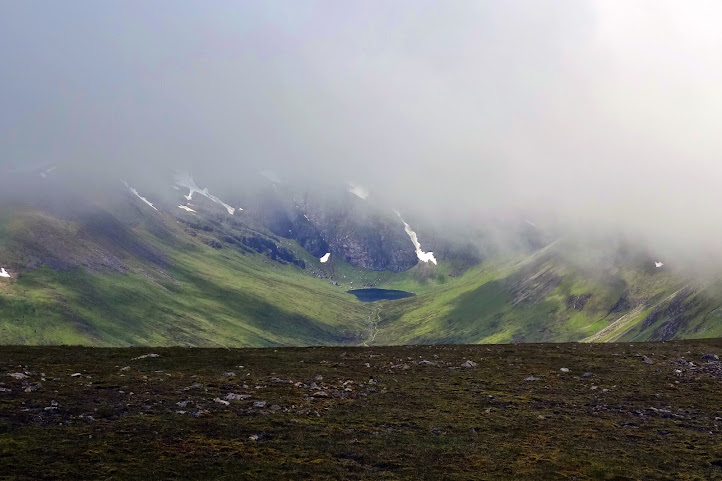 The cloud begins to lift 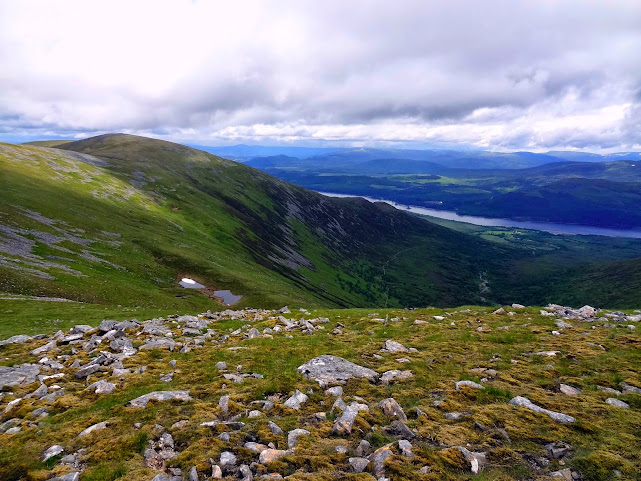 Not long after- views! 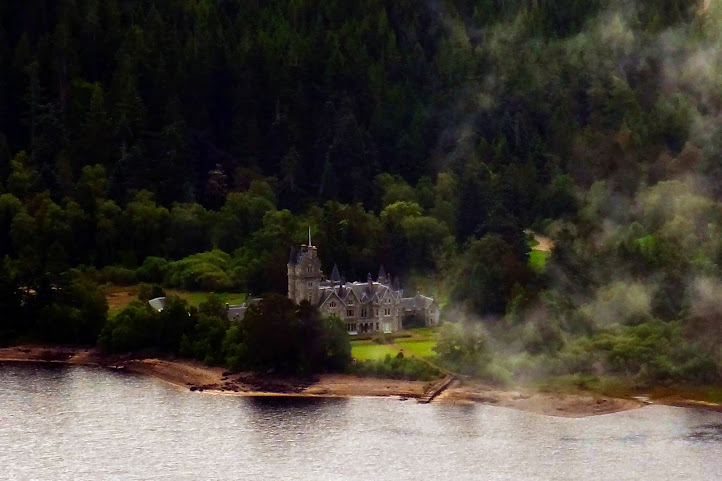 Great house at the shore of Loch Laggan

It was strange as neither of us had expected the rounded features of these hills. They seem to fit more into the Cairngorms. Walking along navigation wasn't as easy as we expected, as the hills made us believe we would have to continue towards the left. Studying map and GPS we soon realized that the walk was indeed different from what we thought and we thanked our map reading skills! Stob Poite Coire Ardair Munro No. 2 was reached and looking ahead it was hard to believe it was summer! Grey clouds and big patches of snow looked more like the end of winter. 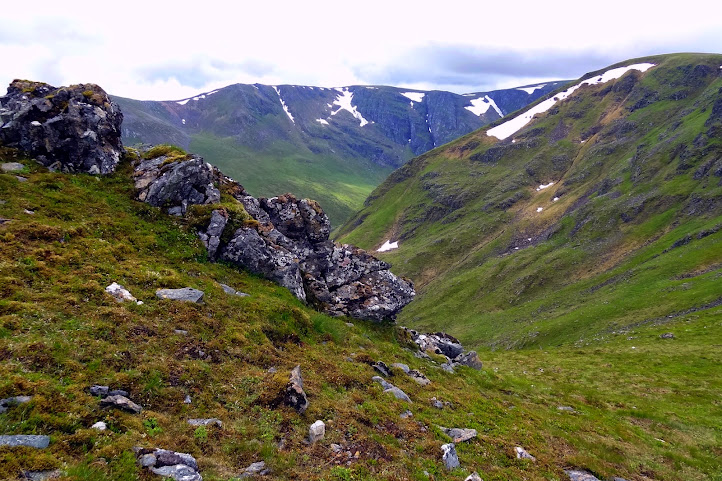 The hill in the distance we thought we had to climb 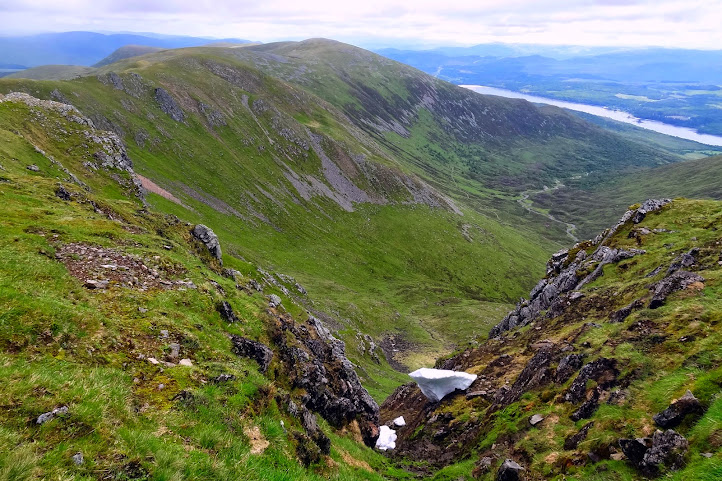 Looking back from were we started 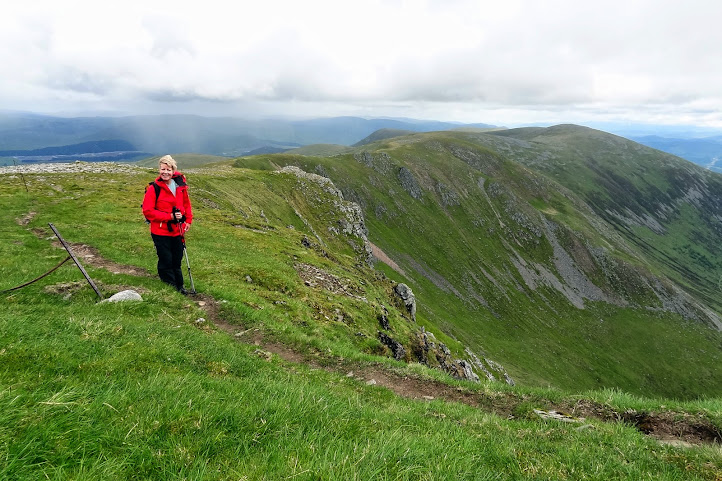 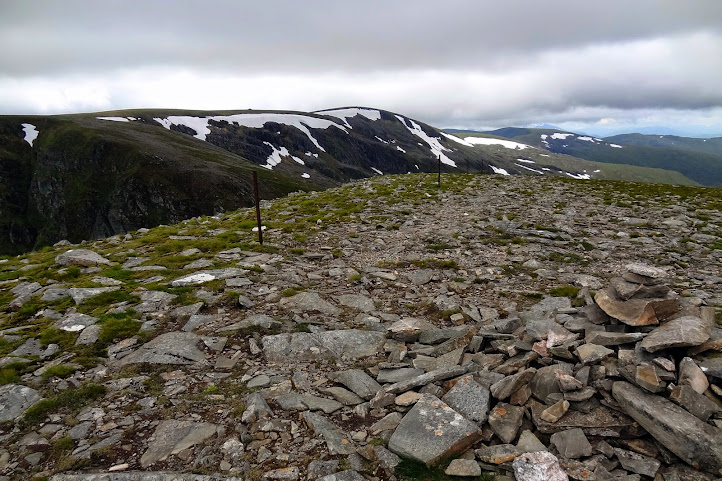 Climbing down the second Munro and up towards Creag Meagaidh was easy and we were surprised how quick we had covered the ground so far. In the distance we spotted Mag Megans Cairn - supposingly the grave of a suicide murder, who was not allowed to be buried in sacred church ground (up a mountains is much nicer if you ask me) Paying the cairn a quick visit we moved on and were soon back in thick clouds. A huge left over bit of snow to our right looked so inviting that we tried our hardest to make snow angles...hilarious! Laughing we moved on with wet bums and soon could spot the summit of Creag Meagaidh the third Munro of the day. 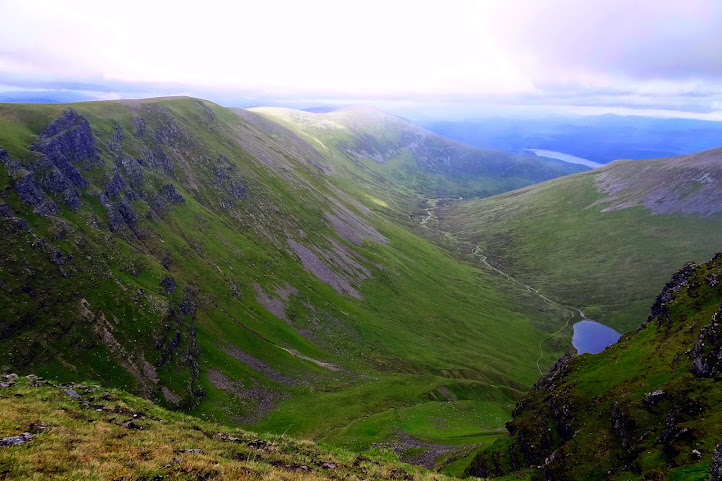 The lovely views down 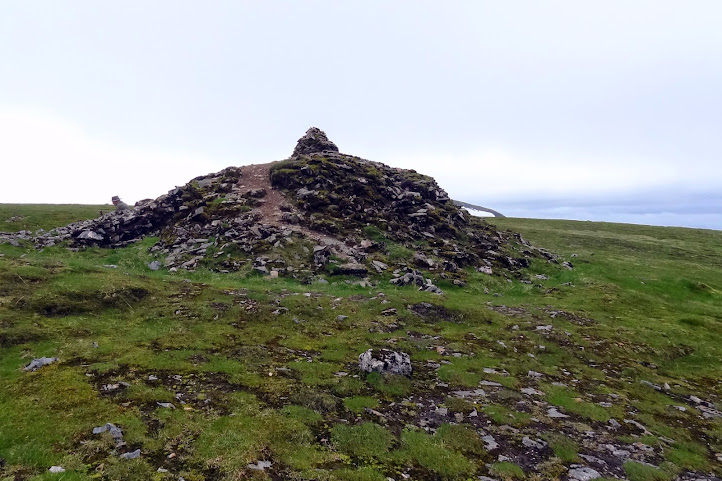 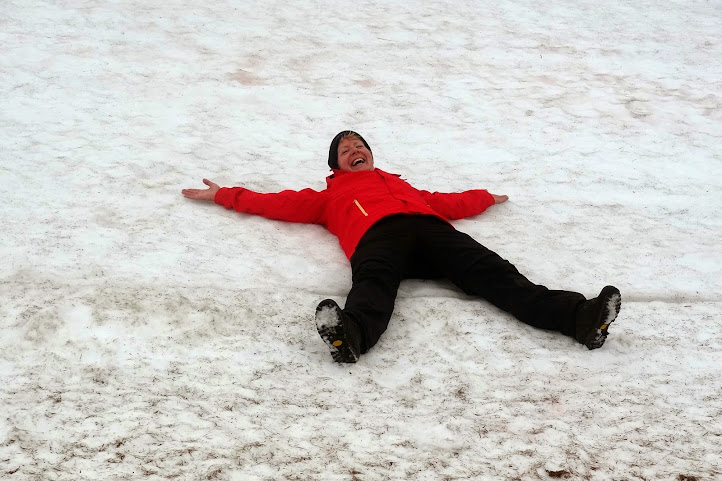 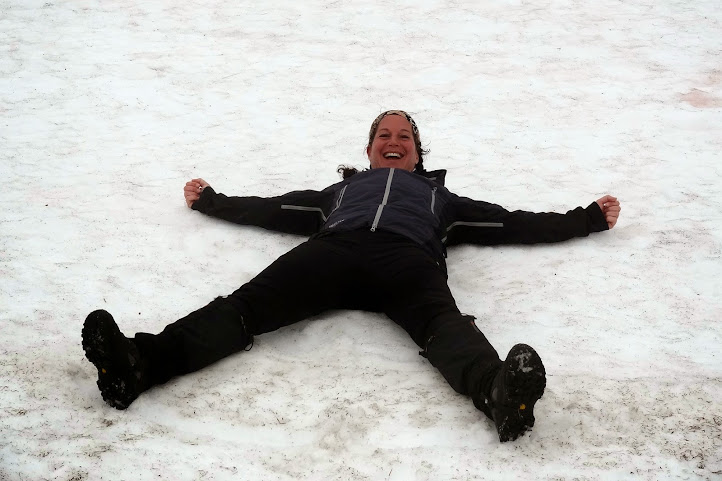 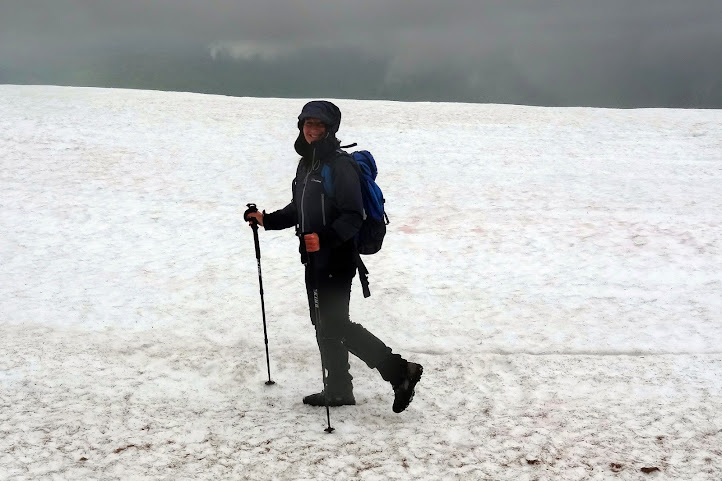 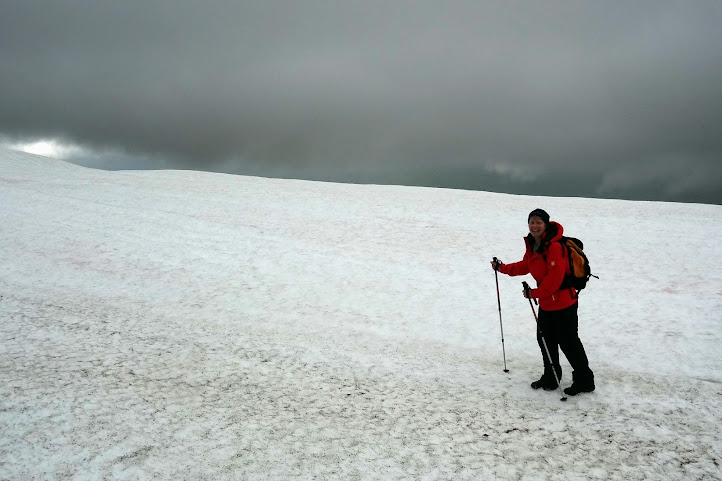 Standing on top of the summit we had the option to return to the car at that point, but we were both keen to bag the last 2 Munros. We checked the map and made our way towards Beinn a'Chaorainn. It was an easy walk and soon the sun was out…time to take the jackets off! Unfortunately the pleasure wasn’t long, as a fierce wind picked up when we reached the summit carn. Ahead in the distance fine views towards Loch Treig could be seen, with impressive clouds looming above the hills. 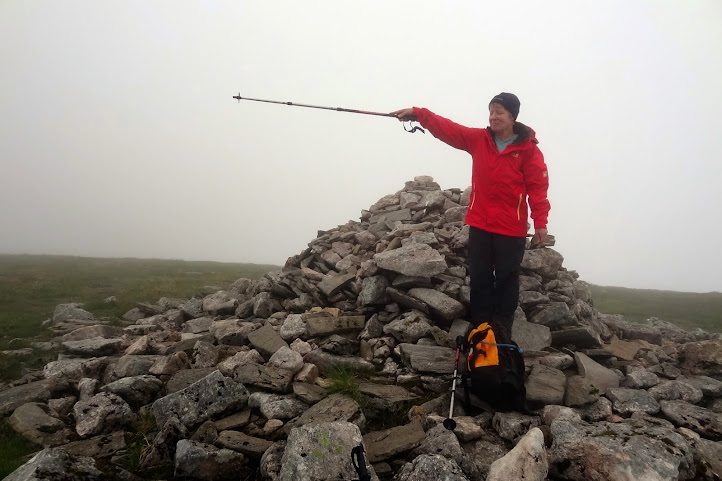 An from here we have to go this way! 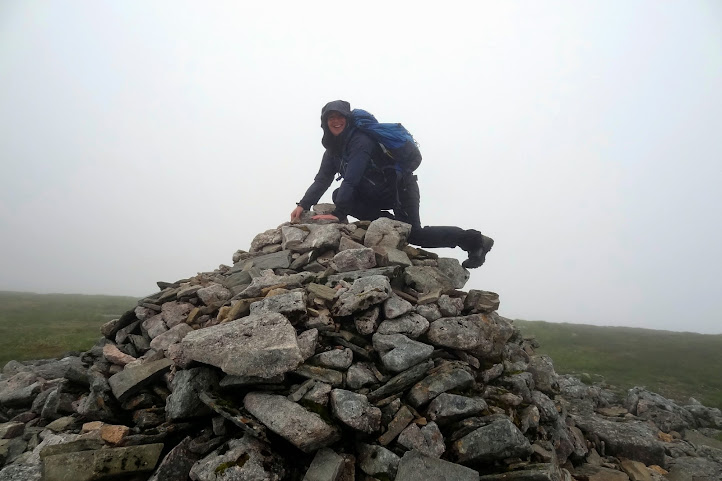 My hands and knees approach 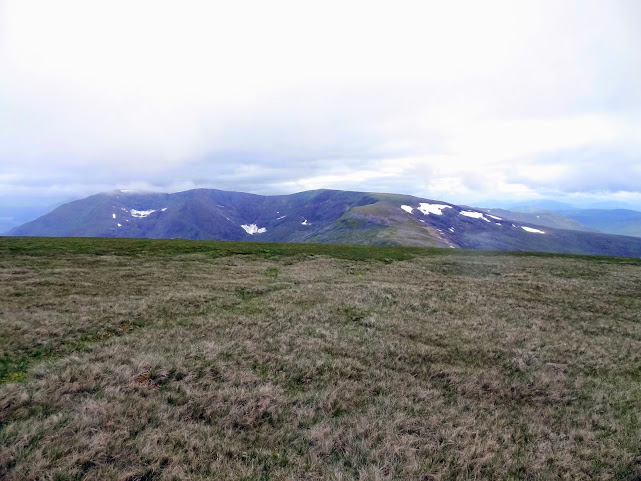 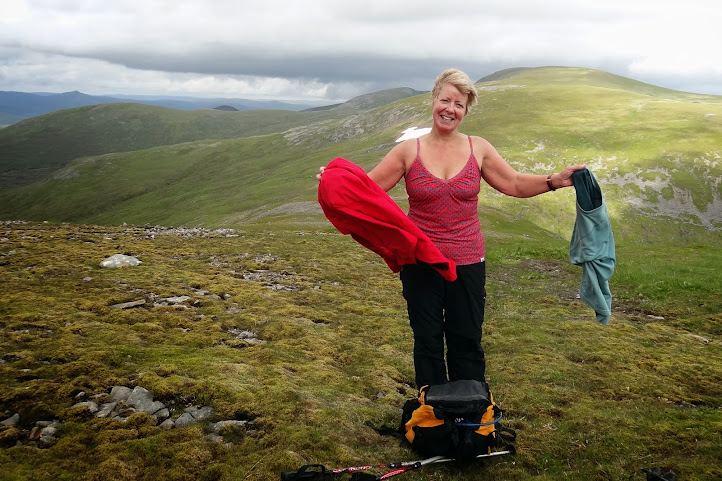 Summer - well for at least ten minutes that day 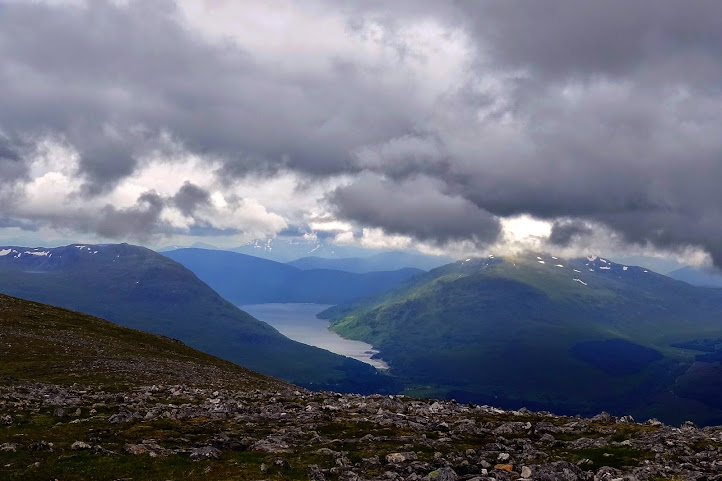 The last Munro of the day Beinn Teallach was looking tiny in comparison and from high above, it was easy to see why it once had been a Corbett. There was no obvious path, but the walk down to the valley was pretty straight forward. Down on the flat we spotted a tarp which seemed empty and wondered who would want to sleep in an open style tent in midge infested country??? 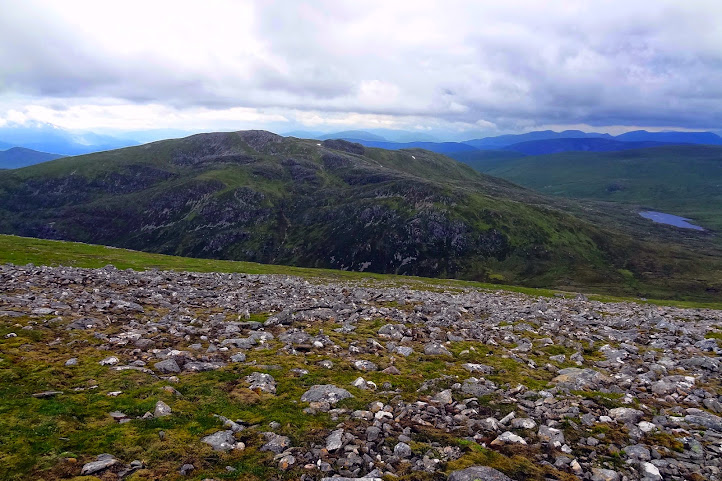 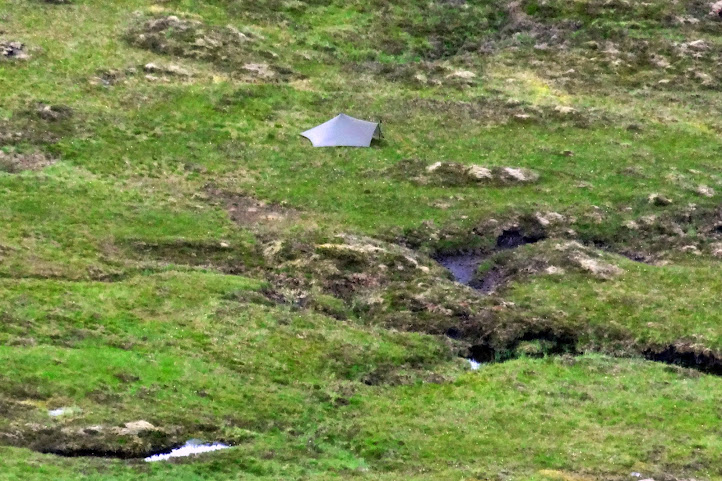 The last pull up the Munro was tiring after the previous 4 and in time we reached the summit, the clouds rolled in. At least we had some glimpses of view! Resting for a while and having some snacks we congratulated ourselves and made our way back down to the car. 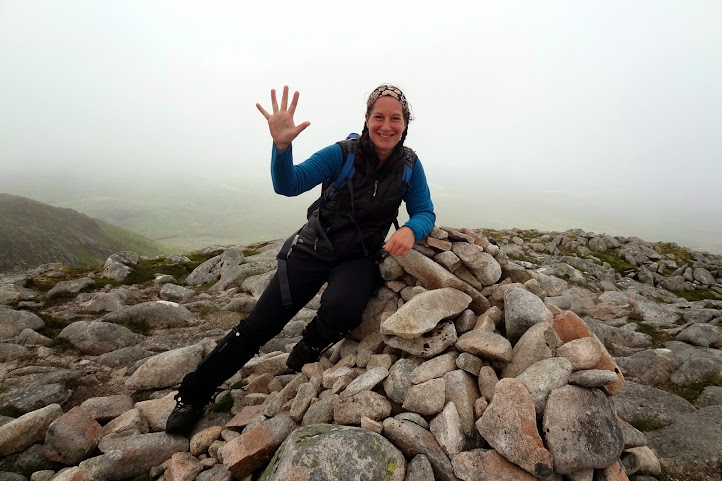 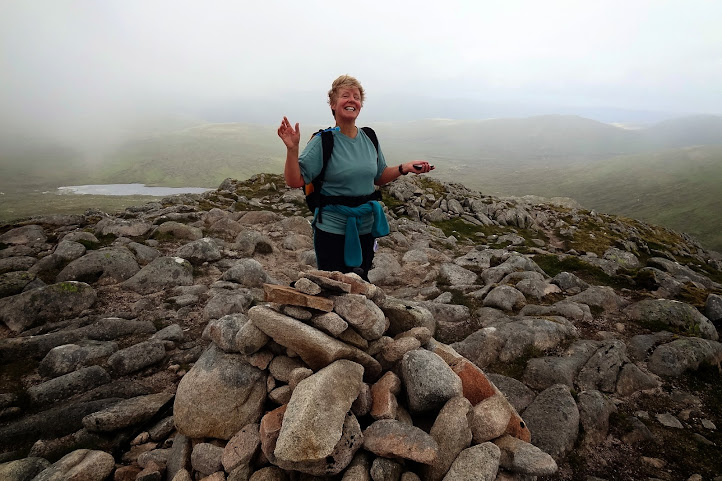 One would think a walk back would be easy, but OMG what a walk it was. Featureless, boggy and never ending. By the time we had reached the forest, we were both done in and seeing the road and my car at the end made up cheer with joy. Discussing the walk after, we were both glad that we done the round of 5 in one go and could only recommend it to anyone who fancies bagging a group of 5 before the days get shorter again. 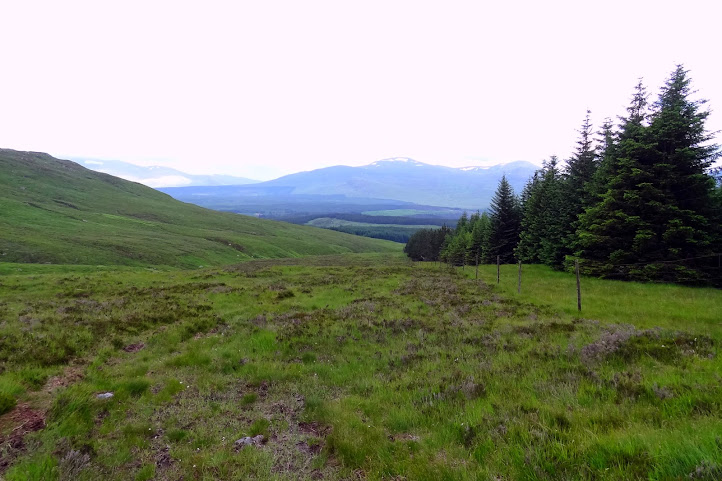 The forest - after the endless walk over heather and grass 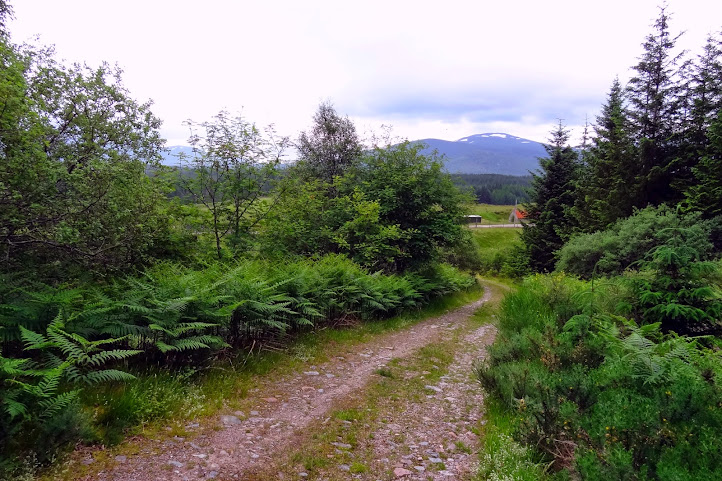 The end of the walk is in sight

Well done Lynne - brave woman going out with you

Remember doing these in summer with a 30mph wind, my lips got heavily burnt and I couldn't smile for 2 weeks...what a state!!

I managed to hitch a lift when doing these, was all set for a lengthy run!

dooterbang wrote:Well done Lynne - brave woman going out with you

Remember doing these in summer with a 30mph wind, my lips got heavily burnt and I couldn't smile for 2 weeks...what a state!!
I managed to hitch a lift when doing these, was all set for a lengthy run!
Great walk this - well done.

I am not that bad

I did read your report as well when I researched it- lucky that you managed to get a lift!! By the time we got down the hill there weren't many car driving past. Burned lips are the worst!!

I am glad you agree...it did look so easy from the top and then it went on for ever...that last Munro is one I am happy not to return to

Collaciotach wrote:I agree with Dooterbang ..........are you sure its no mad lynns cairn now ?

Oh I think she survived the day and was even kind enough to show me Neptunes Staircase during the next day...worth a visit for anyone driving past Fort William!! 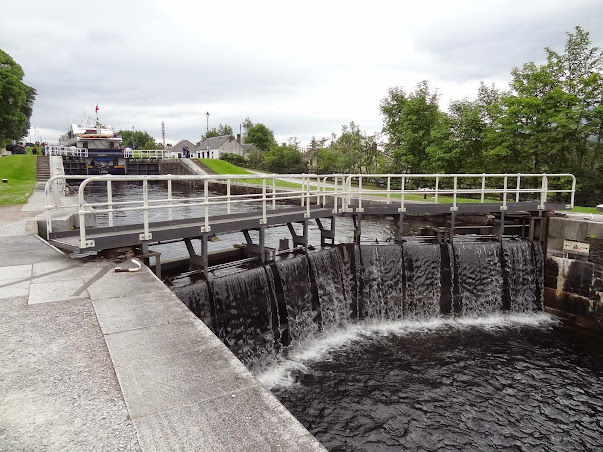 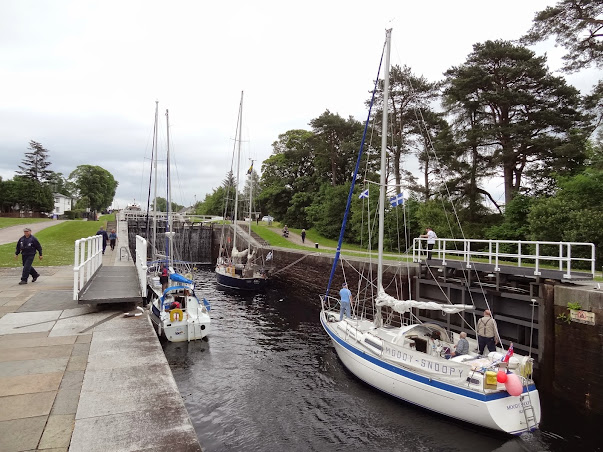 Wow, another epic walk, ML. Are you capable of doing a 1-Munro outing?

But having fun is what it's all about and you seem to have had that in bucket loads!

Hey Mountainlove you do nothing by halves do you, a big day out, pity about the low cloud but it doesn't seem to affect you in any way, you just enjoy it! Like the two snow angel pics, I'm off to the same excellent Bunroy campsite this Friday, it's one of my favourites, with a cafe, shop and Hotel just up the road, cannot be bad