Just in time in Glen Shiel

Just in time in Glen Shiel


I parked in the large layby just east of Malagan Bridge, getting to the Cluanie Inn for a 10am start. The weather was bright and clear, with a decent forecast for the day, so I made sure to apply sun-lotion and wore a cap for much of the walk. The ridge showed its rougher side as I set off along the vehicle track to cross the River Cluanie. That track continues, climbing at a very gentle gradient, crossing a series of burns down from the hills. I picked one of these to top up on water, since it didn't look like there would be much available for most of the ridge. I opted to follow the track all of the way round to the southeast of Creag a'Mhaim, wanting to traverse that hill rather than making it an out-and-back from Druim Shionnach.
I took over an hour on that stretch, making me glad to reach the start of a stalkers' path that heads onto a low shoulders, then makes more steeply uphill. I stopped briefly to chat with a walker who had been to the first Munro, then decided to head back to the Inn rather than slow down the others in her group. Taking some refreshment there sounded tempting to me too, but I hadn't even climbed one hill yet, so it was onwards and upwards.
This stretch of path zig-zags and is beautifully made (as paths go), making light work of about 500 metres' climb. Even so, I'd been going for 2 1/2 hours by the time that I reached the top. That proved a good stop for a first installment of lunch, taking in views in all directions. But the ridge wasn't going to walk itself, so I didn't dally for long. After the first climb, there's relatively little ascent and descent, especially between the first few tops, making it easy to add hill after hill. I found my gaze drawn to the views on either side. The Loch Quoich hills looked splendid just to the south: And to the northeast there were new views of the walk I'd so enjoyed the previous day. Druim Shionnach took only half an hour or so to reach, with some rocks to clamber over (I'm easily tempted away from paths when there's a slightly-higher option) to bag my second Munro of the day. Another brief stop, to take in the views in each direction. There's one Munro Top (not named on my Harvey map), followed by a steeper climb to Aonach air Chrith. This has an interesting-looking north ridge, but I decided against investigating there today. Three Munros in four hours felt like good going, though I could see the next stretch looked more rugged. This was confirmed by a couple I met (heading from west to east) as a scrambly stretch. As it turned out, that was all very mild (at least, following the path, which I did for once). From what I remember, I didn't even feel the need to stow my walking poles, though did use them and an occasional hand or two to steady myself along.
A steepish path leads down from those scrambles, then along a narrow rocky ridge towards Maol Chinn-dearg. This has (or had) one of those artistically-balanced cairns that must need rebuilding whenever the weather gets the better of it. Another hour had passed, so on I went. I passed a couple of maybe-runners (though they were walking at that stage) on my way over Sgurr na Feinne, then crossed a slightly-lower bealach. Clouds were covering most of the sky, though remaining far overhead, by the time that I reached Sgurr an Doire Leathain at around 4pm. This summit sticks out on a ridge between two corries, adding drama to the approach: Looking back from Sgurr an Doire Leathain

And to the next hill along: 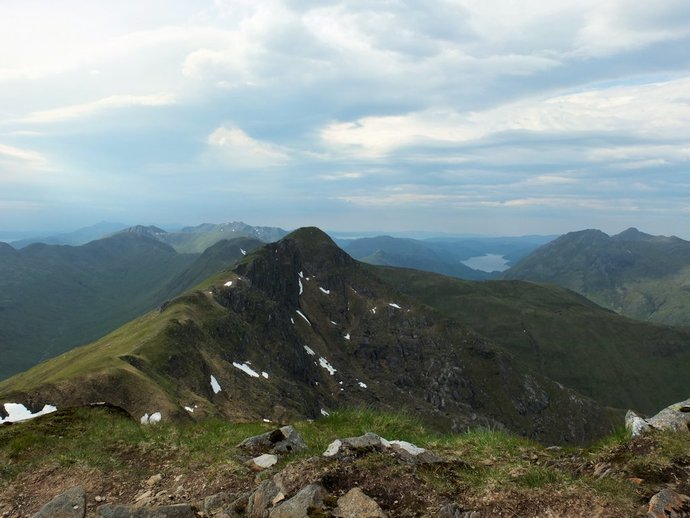 Sgurr an Lochain, Munro number six for the day, made my record for one walk. This also brought me closer to a dilemma, Sgurr Beag. Would I climb it, or take the traverse around the southern side? The skies and the time nudged me to take the lazier option. Those clouds were getting thicker and I was sure it looked like showers were falling off to the southwest. This is one of the longer stretches between Munros, so I took another hour to reach Creag nan Damn as it was. This only just tops 3000 feet, but makes up for that with rockiness and crags on several sides. Those clouds were getting lower and thicker, so I didn't hang around for long. There's a bit of a scramble just west of the top - again, I found it very mild, but enough to add variety to the walk. Some specks, then drops, of rain began to fall, but remained light as I hauled along the rugged (and lengthy-feeling) stretch to the Bealach Duibh Leac.
After a shorter day, without the rain starting, I might have been tempted to continue over the neighbouring Corbett, but there was no question of that today. I turned right, following a zig-zagging path downwards. I passed a group of three, donning their waterproofs, though the rain remained a spattering so far. But a damp path and much-travelled legs reminded me to take care as the path led down, crossing and following some streams.

I met another two walkers as the corrie levelled out, opening to the side of Glen Shiel. We briefly deliberated where to cross the Allt Mhalagain before I opted for a boggy path, then over some stones (the water level was pretty low). Another slightly-damp stretch brought me to a path, then through a gate onto the road. I just had time to cover the hundred yards or so to reach my car, then get into that, before the heavens opened and the rain began in earnest. It continued, torrentially, for long enough for me to abandon my plans of camping that night - and to drive all of the way to Spean Bridge, where I was lucky enough to be able to check into a B and B a day early

Great report. Planning on doing the ridge in the last weekend in July and am going to share this with my group to ease some of their worries. In your opinion is it suitable for dogs? I have a very mountain smart Border Collie who has done about 15 munros with me and I was hoping to take him along for this.

J888ohn wrote:Great report. Planning on doing the ridge in the last weekend in July and am going to share this with my group to ease some of their worries. In your opinion is it suitable for dogs? I have a very mountain smart Border Collie who has done about 15 munros with me and I was hoping to take him along for this.

Thanks; I'm afraid I've no experience in walking with the four-pawed. I would guess that the (mild) scrambling shouldn't bother a collie used to the hills, but that is entirely guessing - and I'm sure there's folk who can give a better answer.
There are a few pools along the ridge (not really big enough to call lochans), though it could be warm dry going on a hot day - so need carrying a fair bit of refreshment for humans and dogs alike. A lot of the walk is on grassy ground and the rock is pretty friendly, without a lot of loose or rubbly stuff (that I can remember). There are some steep crags and drops, nearly always on the north side of the ridge, but it's broad enough to avoid any airiness.

J888ohn, You should have no bother at all with your dog, as has been said before, as long as your dog is a fairly sensible mutt there is only around 15-20 munro`s that are a bit awkward for dogs, the Skye Cuillin included. Take water for the dog when you can though

so how did you get from where you parked your car to the start at the Cluanie?

mrssanta wrote:so how did you get from where you parked your car to the start at the Cluanie?

I booked a taxi - not wanting to leave it up to luck with hitching a lift, or trying to time things with the coaches. And definitely not wanting to have to walk back by road (even without knowing how the rain would arrive that evening). That was quite pricey for the length of the journey (due to the distance of the call-out), but felt like a good investment when the weather turned as it did.