Stac Polly makes up for Am Faochagach

Stac Polly makes up for Am Faochagach


Even though I try to bundle up Munros as much as I can, some require solo outings, which can be rather pleasant and quick.

My friend Sandy had come up with the rather strange request that he did not mind which hill we would climb, as long as he could put up his brand new Hilleberg on an awesome hill and get a photo from it.

In the greater Ullapool area there is only one hill, which fitted the task and that was Stac Polly. I have climbed the hill quite a few times in the past and only since last year had become aware that I actually never climbed the real top.

Something that had to change!

When we arrived at the car park, we were greeted by the comment of a man who just had come down the hill, 'That was a doddle' I agree it is a short hill, (my personal record is 35min to the top) but it is also fiercely steep and the scramble at the top something I would not really call a doddle!!
We set off from the car park and after we cleared the trees and climbed to the east side of the mountain, the great countryside of Assynt and Sutherland spread out in front of us- a view I will never get tired off. From there it is only a steep walk to the top and amazing views are all around. As the goal was the real top and put up a tent, we bypassed much of the scrambles (if you haven't done them before, please do yourself a favor and take your time to climb each little peak) and were soon close to the top. 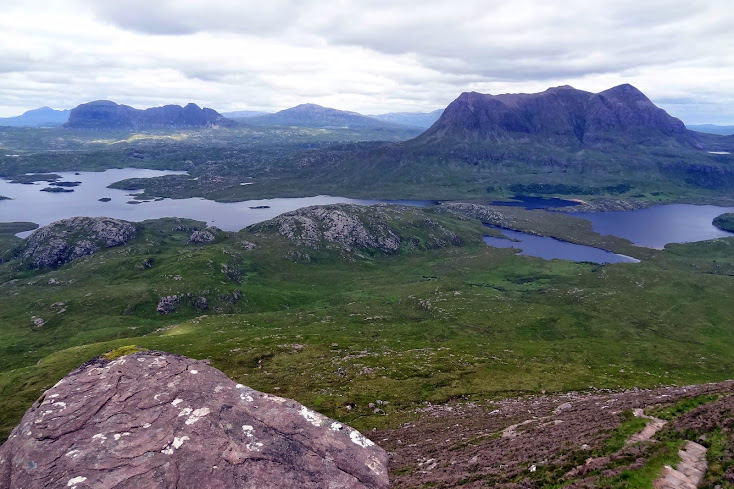 The views to the north 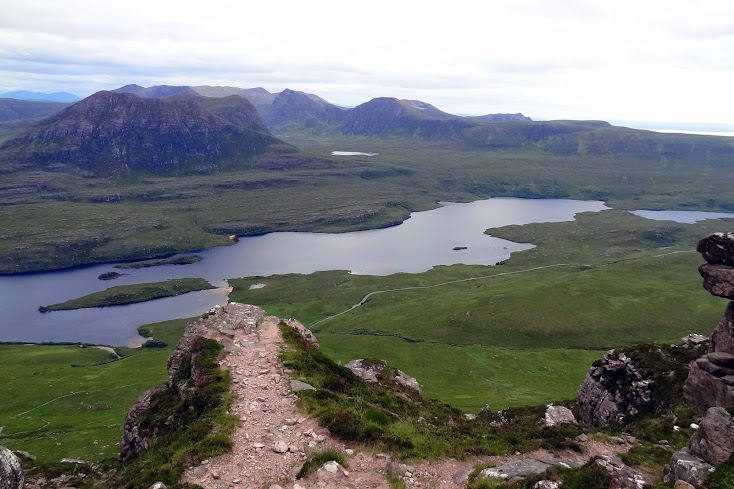 Looking around Sandy found the perfect area to pitch the tent. Watching him in amusement while he tried the perfect pitch, I had a wee wander to take some photos. With the tent up and luckily no one around to watch the madness

, it was time to climb the real top.
We left the backpacks inside the tent and soon stood in front of the steep rock I had turned around here the year before

Sandy was up in no time and with the reassuring shout that he did not really know how to get down yet,

I followed and with a helping hand soon stood on the real summit.

Oh how pleased I was that I finally did it!!

Taking more tent pictures (if you can't beat the madness join in) we made our way down. Ignoring the bit we had climbed up, we found a 'slide' and for the first time it was easier getting down than up. 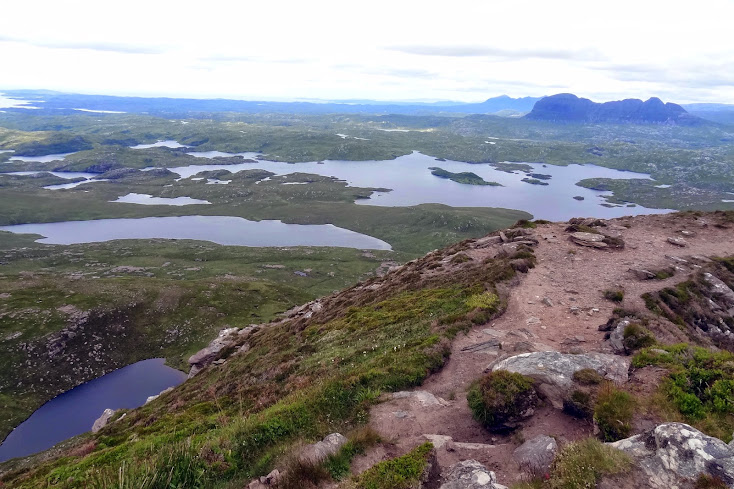 View from the real top 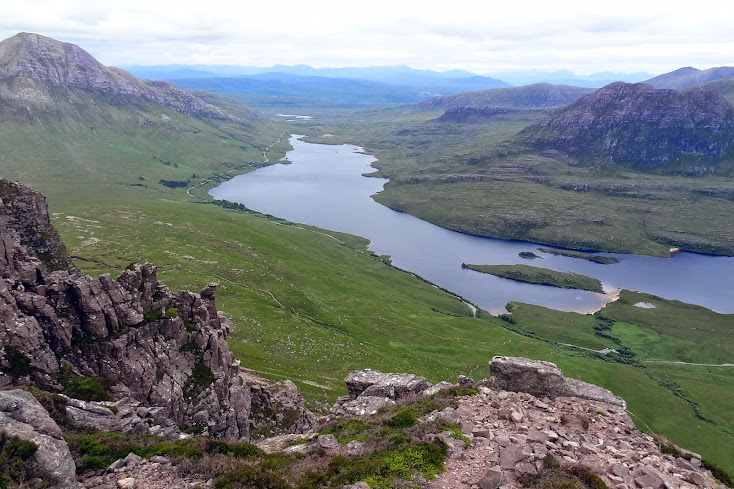 View towards the east 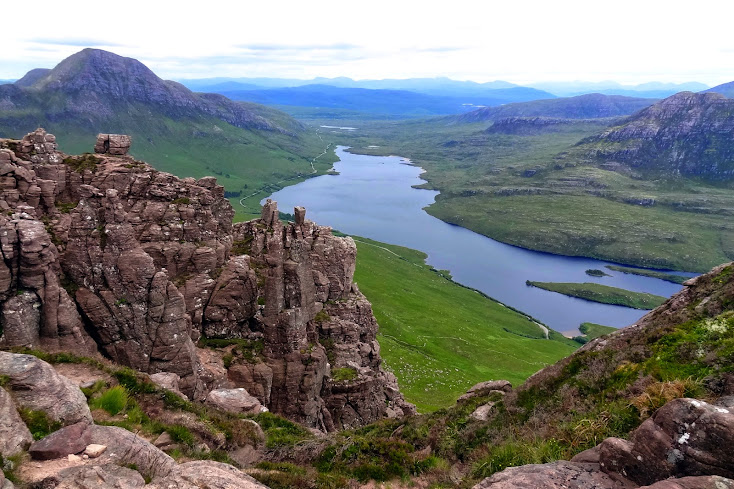 Views I will never get bored off

After a short wait to gather the tent and the backpacks, we were on the way down and ready to climb Am Faochagach

Am Faochagach isn't what I would call an exciting Munro. I had read that the approach is better done in a dry period and I can only recommend it!

The car park is the same I had used only a few days before to climb the eastern Fannichs and walking in the opposite direction, it was great to see the hills again. But what a walk it was...bog everywhere...actually not really any kind of improvement from the days before.

When we got to the river the water level was low - just as well and in no time Sandy jumped light footed over the rocks. Watching him jealously, I followed his steps but taking 3x as long (I shall never get good in crossing rivers)

Saying that, it was pretty easy and I do not want to think how deep the river might be in winter time. 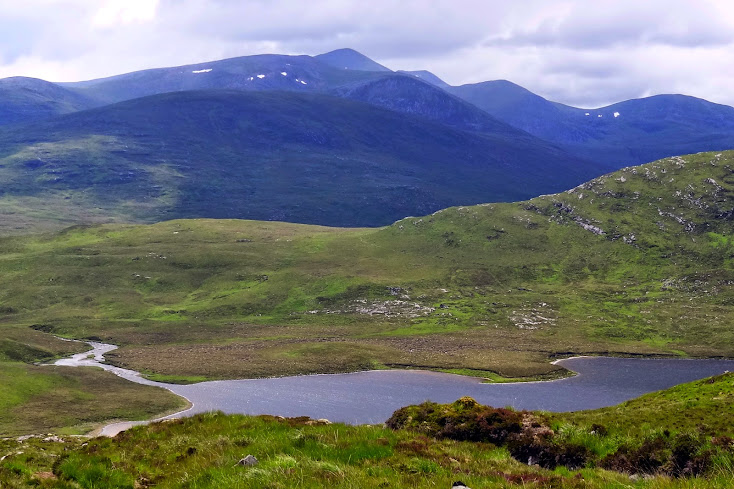 Looking back down towards Loch a Gharbhrain and the eastern Fannichs

The path that followed was an easy slog up a grassy hill site. It was far longer than we had anticipated, but the views over to the west were stunning on this otherwise featureless mountain. 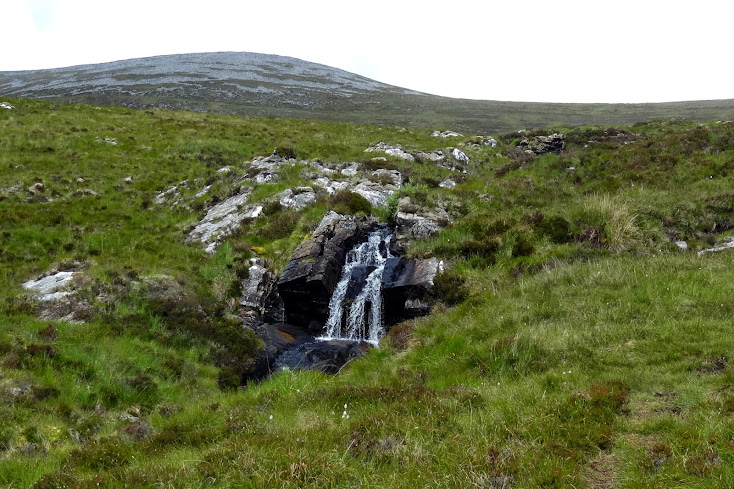 The first blind summit ahead. As soon as you climb this, the path is getting much better 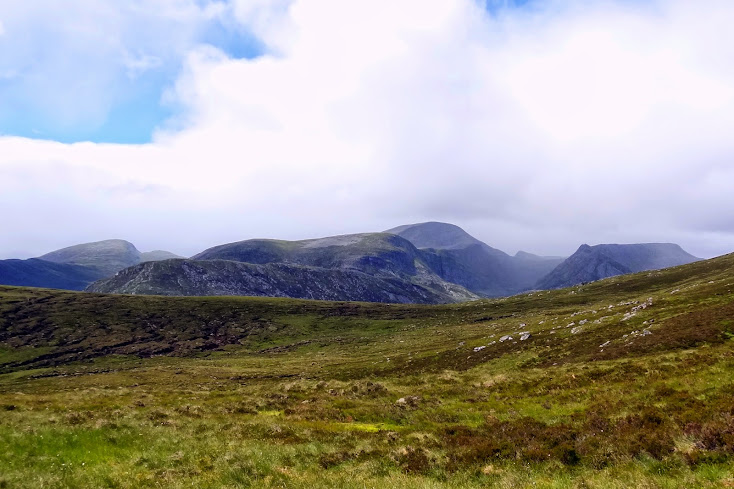 A rain shower lingering around the mountains over to the west 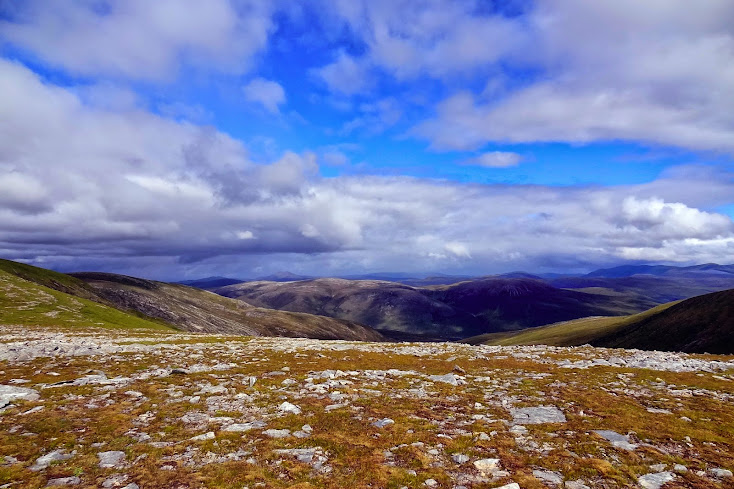 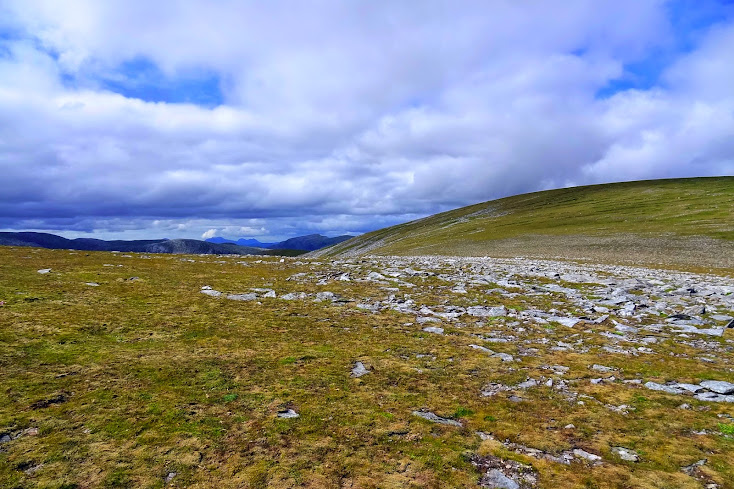 It was an easy walk from here 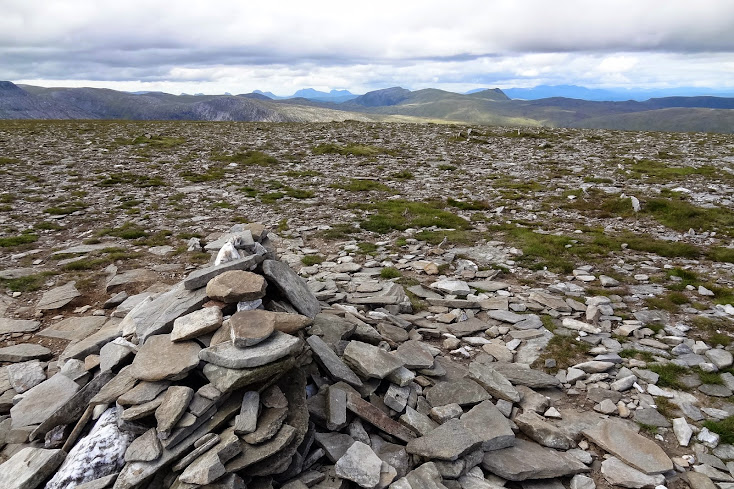 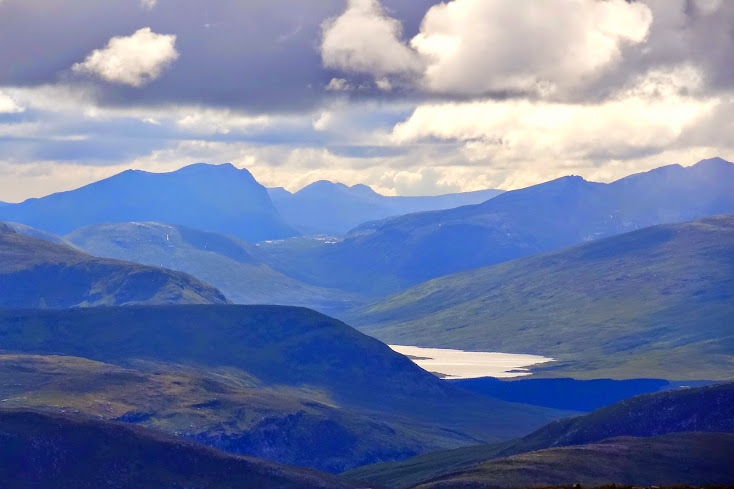 
3h later we had reached the summit and I have to say that even though the views towards the west and south are lovely, we were both annoyed to see quite a few wind farms towards the east. It did spoil the feeling of remoteness. With the cold wind blowing we did not linger long at the top and had a bite to eat in a wind protected area on the way back down. With the wind farms out of sight, lovely views towards the Fannichs could be enjoyed. It was hard to leave, but time was getting on. I am not sure how we did it, but on our return we managed to miss the path and had to cross the river 3 times in total

That taught us a lesson

Just over 5 hours after setting off, we were back at the cars. Am Faochagach will not make it to my list of favorite mountains, but luckily Stac Polly made up for it. 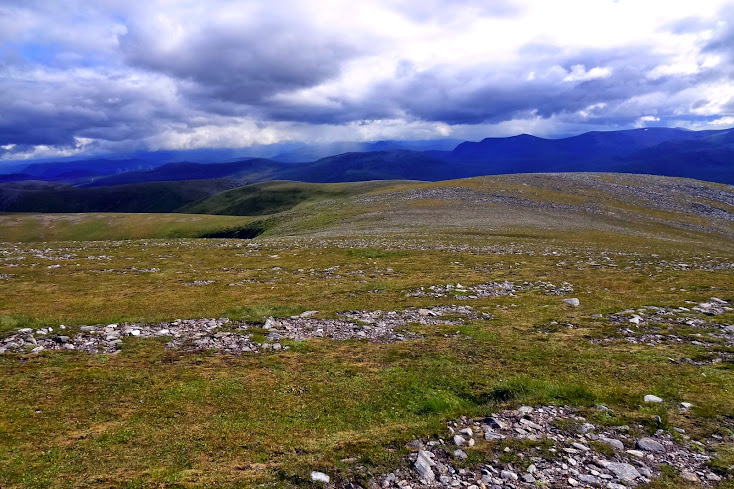 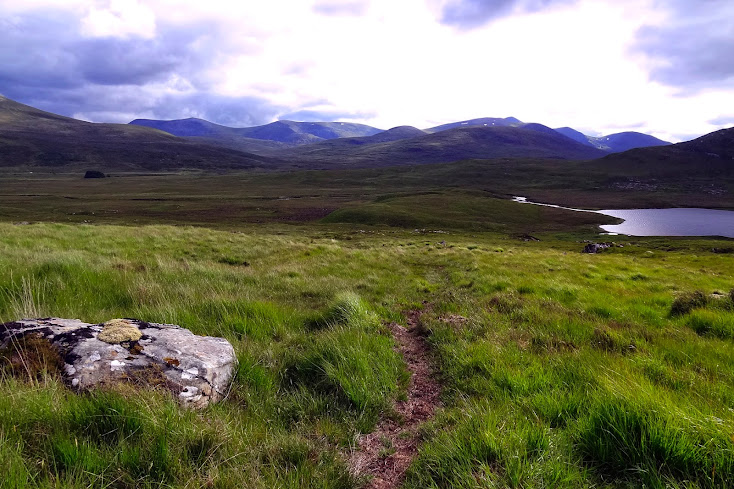 The road is coming into view again

Good photos as ever,ML - haven't yet covered Stac Pollaidh but hope to some time - cheers

Stac Pollaidh is a stunning hill and one worth revisit after revisit. Not sure I'd pitch a tent up on it unless I was planning an overnighter.

Am Faochagach might not be the best hill in the book, but at least you got the great views from it I didn't when I did it earlier in the year.