An Sgarsoch and Carn an Fhidhleir from Linn of Dee

An Sgarsoch and Carn an Fhidhleir from Linn of Dee


Plan A for this weekend was a trip down to Bridge of Orchy on Friday, then walking the 6 Black Mount hills to the East on Saturday followed by the 5 to the west on Sunday. Weather had been good all week, but of course that was to change come the w/e, wet from the west but dry in the east, so a swift replan for Braemar to bite off these two and also Ben Avon and Beinn a Bhuird both on Saturday.

The camping gear was already laid out for Bridge of Orchy but heh ho, they were to be two big days and having seen previous posts, too good to waste in the pish.

An Sgarsoch and Carn an Fhidhleir probably fall into the category of Munros that would never be climbed if they didn’t have that status. Maybe, maybe not, certainly remote.

Now as you know I’m not adverse to an early start and it takes best part of 2 hours for me to get across from Forres (hopefully a bit quicker from Miltonduff, must check map), so alarm was set for 0300hrs…cripes

Despite this silly o clock, once up and preped for a walking day I find I’m wide awake within an hour, unlike for work, strange that. No doubt some psychological reason for that (answers on a postcard)or maybe cos its fun, even in the rain.

Plan was to take the bike for the long way in for these two, with my new cushioned saddle to protect the important bits, that’s the theory

It was a pleasant drive over to Braemar, stopped a couple of times for pics, this first one sunrise over Tomintoul, a lovely place, could quite easily live here

The second pic being Lochnagar catching the first of the sun, looking stunning, had some brilliant days here, and one in pish, which made the walk out via Loch Muick even longer. So not a bad start, maybe the forecast was right.

Arrived at Linn of Dee, readied the bike and being a good boy paid my £2. I should have shares in this car park, number of times I’ve used it. I was off by 0630. Another guy left before me on foot about 30 minutes before me.

Now the aforementioned theory regarding the new saddle, it seemed to be better than the old one for sure but I think my second pair of cycling shorts (the original pair) had seen better days, the elastic round the waist didn’t seem to be functioning (or I’ve got thinner…fitter I like to think of it) and the lining round the bottom of each leg, seemed to have become a bit sticky, for want of a better word.

But enough of that stuff, some sections of the track I walked, and at one point, having passed my walker, saw him in the distance catching me up, jeez was I that slow cycling ? Yes Spider you are ! I peddled faster but to no avail, but eventually the ruins at Geldie Lodge came into view. No guesses for what had happened to the weather, hence the remaining pics of the views just look at the one above and take out the ruins as they are all the same, mostly.

I cant recall how long it took to cycle in, remember reading that it was mostly downhill, much to my surprise, it clearly wasn’t as I got out much quicker.

Dismounted, not quite as saddle sore as last time (note to oneself…new padded shorts) and set off on the map marked track which is good until it ends and then the going gets tough.

Saw this wee chap on route, will have to get the book out to identify, but its clearly a bird. Curlews stayed hidden today but I could hear them. With the clag only just skimming the tops I was hopeful things would improve, but it was a murky start and no doubt because I hadn’t studied the map for these tow having been prepared for Bridge of orchy, I thought I was looking at my first target in the next pic, Carn an Fhidhleir, but nope it was An Sgarsoch. The usual batch of heart attacks on the way in courtesy of the grouse, chick as well, that didn’t flush until I was nearly on top of them. No adders, duvet day for them.
The track went on a good way and looking at the map now its about 2 miles plus ending at a burn, where my walking pal caught me up !!!! So much for my cycling. 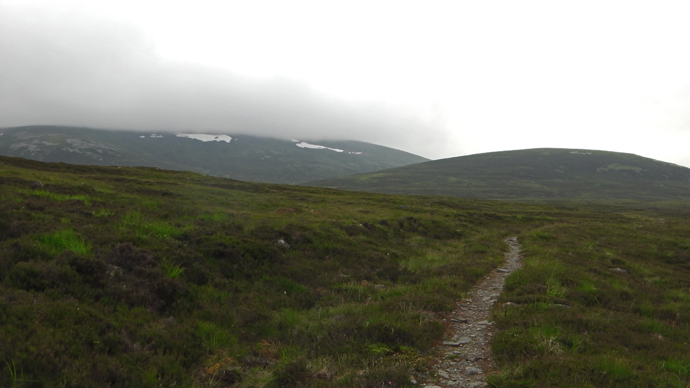 He shot past me, so I gave up and took sustenance and a fag. When I did eventually compose myself and climbed up out the burn gully he was nowhere to be seen. A faint track begins to head towards the lower end of the ridge leading left to the summit, he must be tucked down in a gully or sumink. But no in the distance I could see him ascending in a direct line to the summit, I didn’t think I’d be seeing him again.

Now I don’t know if it was the sight of him steaming off, or the fact he had outpaced me on my bike, but my legs were like lead on ascent, and the rain now falling (full waterproofs…curse that forecast) and I was so glad to hit the top I stopped for only a few seconds to take in the views (see pic 3 minus the ruins) and was off again.

The left turn at the bottom of the descending ridge threw me until I checked the map, as I didn’t believe my GPS but it was right as ever and the ascent began up An Sgarsoch, initially across peat hags, thankfully dry enough, some thick heather and finally rocks, and the summit with the obligatory summit pics again with the views (see pic 3 minus the ruins). Again it begun to rain. On ascent my mind had turned to my dog Holly, could even see her running about in front of me, she would have enjoyed today, nose going 10 to the dozen. At the summit I sat in the wind shelter, fortunately placed the right way round for the wind and wet today. She was still on my mind, now sitting in front of me, waiting for me to get our lunch out the sack. Holly would get most of the sausage rolls and cheese… I wept and she looked back at me head to one side, bemused. Time to go.

Descent was heavy going, no path to speak of, but more or less following the burn that flows north from the summit and round the left side of Scarsoch Bheag where a path appears. Lost in my thoughts I could see the path used on route in and knew I needed to be on it, so a left turn to pick it up as the path I was on seemed to carry on around.

Even picking it up at this point some half way along it still seemed to go on.

Eventually reunited with bike and away, and it was definitely quicker coming out, passing my walker pal, shot past arse in the air, collapsed round the next corner !!

Couple of pics on the way out. Now I don’t mind a good walk out but some seem to go on forever and this is one of them, pleasant enough on a fine day no doubt. Slioch is another, I’ve got the facial pics to prove it

So the day ended back at Linn of Dee, Ben Avon and co can wait for a nicer day, as I’ll never find the secret hoowf in this weather !

Well done Dave, was there last week with Backpacker climbing http://www.walkhighlands.co.uk/cairngorms/beinn-a-chaorainn.shtml Sadly we never had bikes, but it was a cracker of day and the walk in was delightful with all the wildlife and old Scots pines, a joy to look at. The bird you saw was a Golden Plover.

Collaciotach wrote:Unlucky with the weather a bhalaich but hey a day out is a day out eh

Thanks, yep its a day out and none better than in the hills, just noticed your one 203 same as me

David-Main wrote:Well done Dave, was there last week with Backpacker climbing <span class="skimlinks-unlinked">http://www.walkhighlands.co.uk/cairngorms/beinn-a-chaorainn.shtml</span> Sadly we never had bikes, but it was a cracker of day and the walk in was delightful with all the wildlife and old Scots pines, a joy to look at. The bird you saw was a Golden Plover.

Cheers David, not sure about the bike as you've probably gathered

Golden Plover thanks, it was making quite a racket no doubt due to my presence. Did Beinn a Chaorainn on 3rd November last year, in very winter conditions with serious wind

Good to see another report on these two hills - reminds me I still need to do them - hopefully I'll get a better day than you but a day on the hills is a day on the hills and no matter the weather it's better than being in the house or at work.

Good to see another report on these two hills - reminds me I still need to do them - hopefully I'll get a better day than you but a day on the hills is a day on the hills and no matter the weather it's better than being in the house or at work.

Hope you do get a better day, I picked the wrong one, owing to the forecast changing and me of all people to take notice of it Doh !! But you got that right, any day in the hills is great, a lifetimes passion but some people just don't get it. Better than work or decorating of which I've got a fair bit to do in my new place, but that can be done in the evenings