Another little gathering arranged via WH

So when the suggestion to tackle Cruachan was made I volunteered to partake, my partners for the day were Karen & Cat who I walked with before, but they had never met. To slightly complicate matters Cat was moving from Dundee back to Fife and would have very limited internet access, so I acted as a go-between.
Cat had kindly volunteered to be the chauffeur for the day & I had arranged with Karen that we would meet her at Crianlarich

Sharing the one car would make parking in the layby at the start a wee bit easier, as it turned out we had the whole layby to ourselves when we arrived

We arrived in the layby at the tiny train station & set off in good spirits at 9am, the sun was out & hardly a cloud in the sky, no breeze either. I knew that was going to be a problem as the flying eating machines would be looking for their breakfast, so I splashed on the 'skin so soft' on top of the factor 30 & off we set

Up the steps, under the railway line & then into the jungle

The wooded area up towards the dam was a real battle & the girls kindly let me lead the way to catch any insects, I would have been better armed with a machette rather than walking poles, the bracken had really shot up since my last visit 6 weeks ago & the path was only just visible

It was with great relief that we reached the area just below the dam, out of breath because if we had stopped we may have been devoured & the heat was really sapping our energy 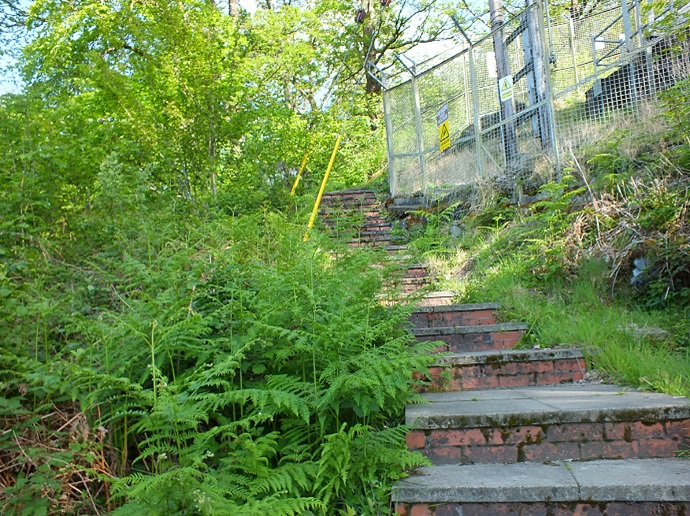 The steps prior to entering the jungle Gives you an idea how steep the initial climb is After climbing the ladder up Cruachan Dam we joined the track that runs along side Loch Cruachan, we followed the track until we reached a small cairn indicating the point to turn left & start going up 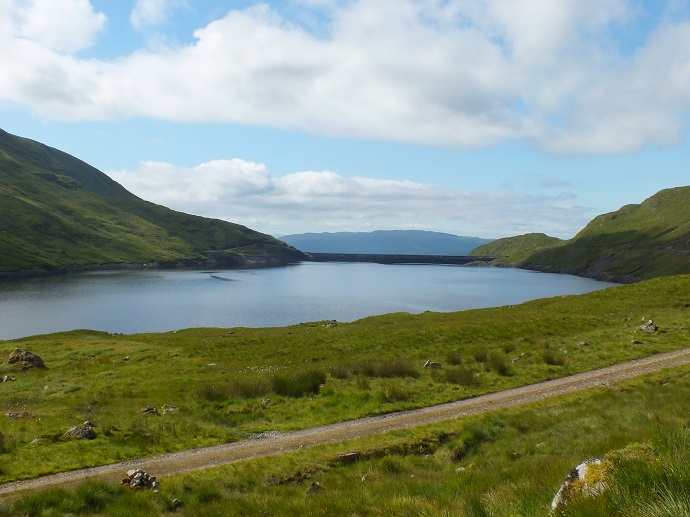 Looking back towards the dam before the ascent begins

It was during the climb that the clouds appeared & a slight breeze developed, both were welcome, however the downside was the summit of Cruachan now had it's own little weather system

For some reason (probably me stopping to take a photo) Cat was leading us upwards, however in her enthusiasm she either wasn't paying attention or deliberately stepped in a hole - that was full of lovely muddy water

After suffering the water sploshing round in her boot for a few minutes, we decided to stop so she could empty her boot & wring as much water out her dirty sock 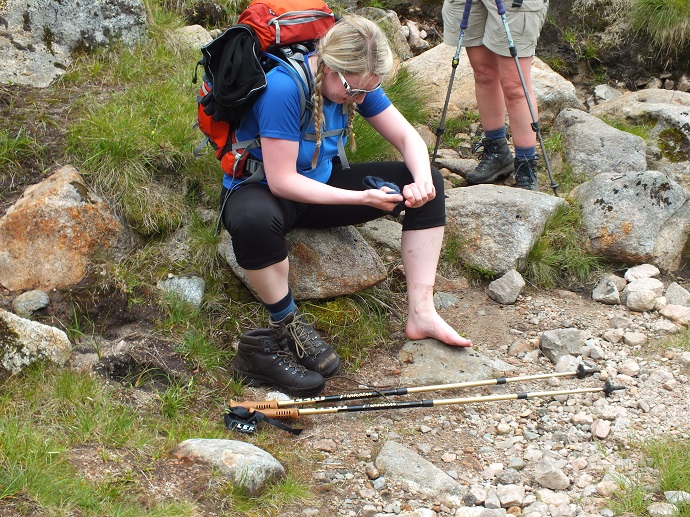 We reached the summit in 3 hours 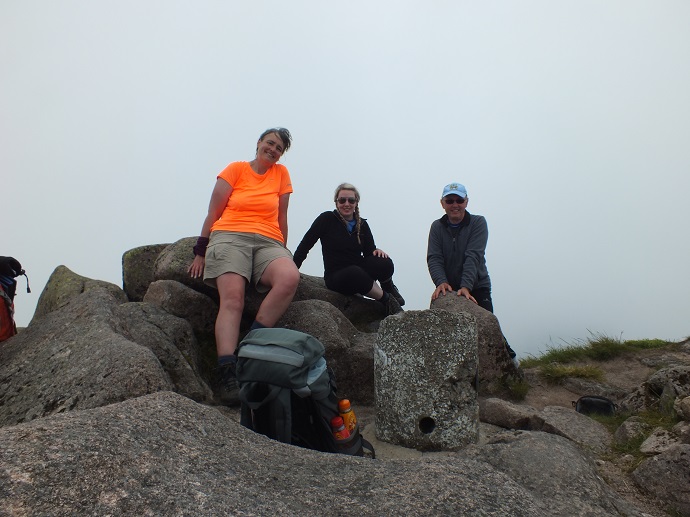 Summit photo, took 2 attempts to get the poses correct Unfortunately the views from the summit were a bit restricted due to low cloud, so after a very brief discussion as to whether we should wait a few minutes to see if the cloud would lifted, we decided to move on The first obstacle - the slabs, Karen & I took the bypass path, whereas Cat having taken bravery pills ventured across the slabs The way ahead to Stob Diamh Loch Cruachan from on high 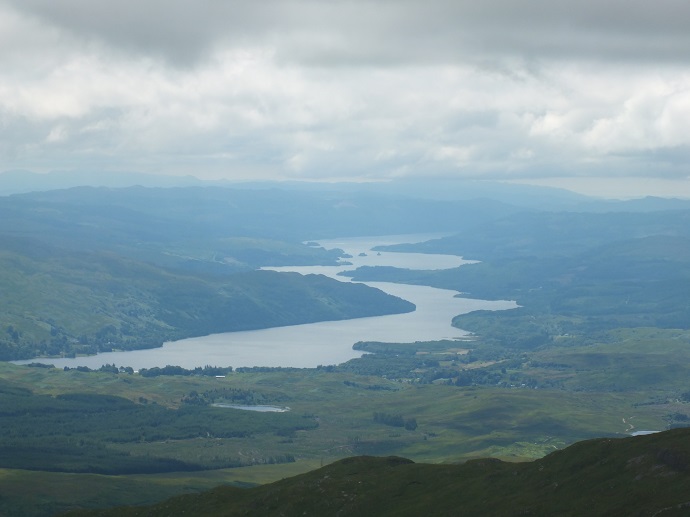 The walk across the ridge to Stob Diamh was fairly straight forward, a few scrambly bits & descending on scree, we reached the summit after a couple of hours 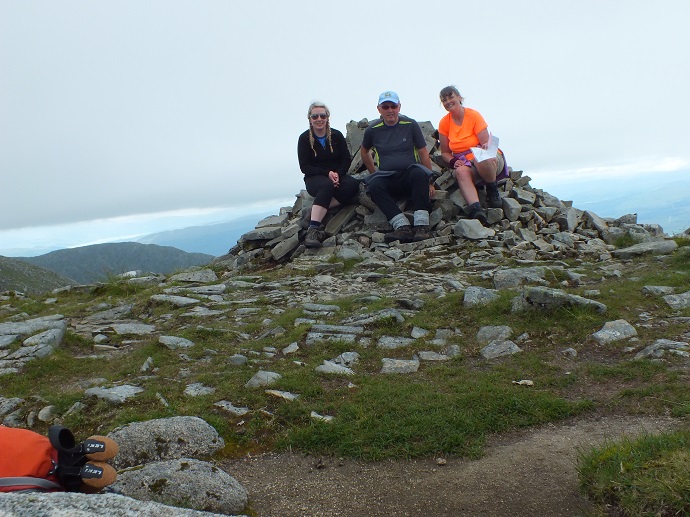 Summit photo, getting the hang of the posing after the 10 second dash 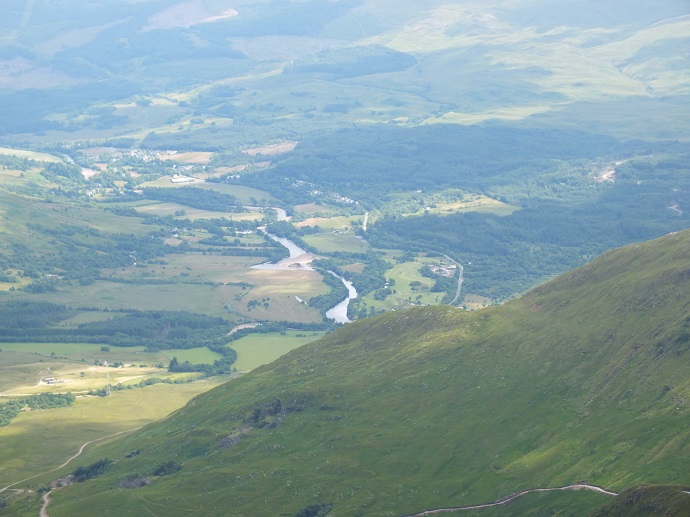 Looking across to Dalmally 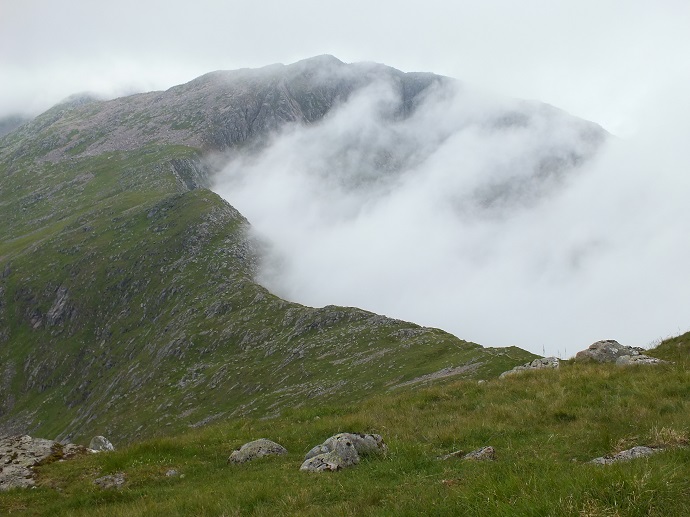 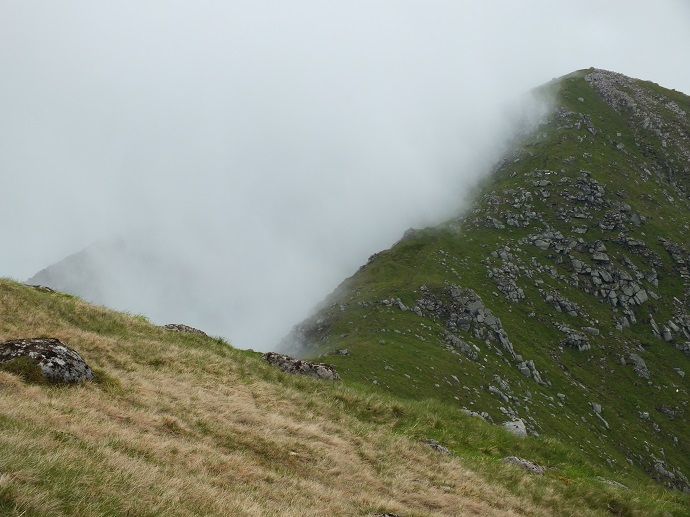 Cat stumbled across this wee frog The navigation along paths had been almost perfect all day, but we all knew that was too good to last & so it proved

The descent down to the dam was fairly straight forward, even though the path down was intermittent, when the path disappeared we just kept heading down & as if by magic the path re-appeared

Once we reached the dam the sky seemed to clear & the temperature increased significantly, we knew this was going to be a problem as the descent through the jungle was next on the agenda Cat appearing out of the jungle 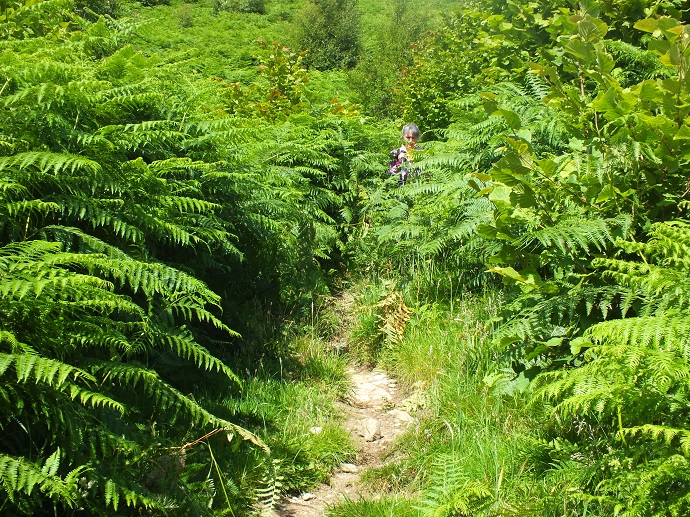 Cat through the lower trees

We eventually made it to back to the car, tired & perspiring profusely

The next port of call was the 'Real Food Cafe' in Tyndrum for well earned fish suppers, my first visit & I have to say the fish were certainly on the large side & easily devoured

Another great day out on fantastic hills with great company

These two are great hills and despite a bit of clag rolling in you got some great views.

These two are great hills and despite a bit of clag rolling in you got some great views.

I would agree, the slabs were great fun

I think I did these in September a couple of years ago and it was suffocatingly hot. The bracken was the same as you had it

The slabs were fine. It was a shame you couldn't hear me shouting back to say that at the time.

That photo of me wringing out my wet socks is not the most flattering of photos ha ha! The muddy hole survived the pole poke test! Oh well!

Looking forward to the next one already!

A great job on the ridge for you!

That's why I was FORCED to lead the way, us men are expendable

I would have been better armed with my hedge trimmer

nice one, FF - did look an enjoyable walk despite the water in boot episode - cheers

Hi Martin your fairly knocking off those munros ! Nice photographs there, there was not a thing as digital cameras when I did this round so my photographs were few and far between, forgotten many sections of the route, so thanks for posting. Enjoy the Cairngorms, fingers crossed for good weather for you and the rest of the WH squad at the weekend, I cannot make it, other commitments.

We've been inside Ben Cruachan but never on top of it. Great report and piccies. Loving the "jungle" bit

Hi Martin, hopefully the tick twister I've ordered will arrive before I try this route! Another great set of photos, so keep them coming.

Great report and photos - love that green at this time of year. Sound like you all had fun despite the wet boot!

), it was another crackin' day. Thanks, Martin, for writing yet another grand WR (one of these days, he's gonna make me do it), and thanks to both you and Cat for entertaining companionship.

I fully expected to find ticks everywhere on me after hacking through the bracken -- and did more than one thorough check -- but surprisingly (and happily) found none.