It was that bugger KInley's fault. Here I was halfway up a mountain on a Friday night, drinking Talisker, afraid to go out of my tent and pee because of the driving rain and wind at 500m. Did I mention there were views only of my feet, shrivelled genitalia and clag? Where were the clear skies and amazing sunset? I'd seen it often enough on Kinley's reports and I wanted the Kinley experience! Was I the anti-Kinley? He was the epitome of the ultimate high camp - I was the epitome of drizzle. He must be a demon on photo-shop, I thought. I settled down for the evening and attempted to get some sleep on a sloping mound (Lon Tubhaidh) a few clicks N of Stob Coir an Albannaich, my 2nd objective for hopefully a better day tomorrow. Curlywurly was settled down for the evening in his tent, watching a film on his IPhone. Lucky basa. We agreed a 0600 start would be good and we would make a decision then to either descend or go with our intended route of doing Meall nan Eun, Stob Coir an Albannaich, then Glas Bheinn Mhor. I dozed off at 2230 and after a few hours sleep awoke at 2303. Oh, give me a break! I must have been lucky if I got 2 hours kip - I consoled myself with nothing except the fact that I was probably warming a few worms up. The minutes ticked by. My arse was numb. However, at 0500 I peeped out of the tent and saw that we had VIEWS! Breakfast down, tents packed we got the blood going and a quick look up to SCanA provided hope for the day ahead.

With a good starting point, we were up on to the bealach between Meall Odhar and Meall nan Eun in no-time and the latter peaked out with the cloud clearing. Kinley's no a bad chap efter a'. By 0715, we had bagged Meall Nan Eun and our 2nd hill of the day looked quite spectacular but it would be a sod to go over the Corbett Top of Meall Tarsuinn, down and then back up SCaA. However, the cloud was really lifting and Curlywurly and I really began to enjoy our day. Quite an awkward trek over to the 2nd Munro and in bad conditions, it would be easy to get lost. Once on to the main ridge, we were wowed by what looked a conical peak which you couldn't appreciate from the climb up from the other side. By this point, Bidean looked stunning in the distance and there was a considerable amount of snow still on it. However, If I'm being honest (and it seems that I am) I was beginning to tire already with the heavy pack on my back, Jack. The last pull up on to the 2nd Munro of the day was tough and I was glad to get the main bulk of ascent done. How was Curlywurly doing? Having just done a Munromarathon a couple of weeks before, I knew he was fitter than me - that kind of thing can be psychologically difficult to content with. Must keep going though - must think Russian, must think Kinley...

. We didn't stop for long and began the awkward descent (due to fresh snow) off SCanA down to the bealach before Glas Bheinn Mhor - it looked quite cracking and so did Ben Starav in the distance - Curlywurly was delighted with what Glen Etive had to offer as it had been his first time down here and he would be back to bag that big boy. Alliteration on Albannaich? Get the hill outta here! As we started ascending GBM, I became concerned that I was really going to struggle with this but we had a good pace and before we long, we were up on the ridge - at this point, we spoke about work and all those work-shy buggers who make your working life a misery - why can't these people be given their marching orders straight off Ben Nevis? Twa old codgers, we were. I remember being downt mine... However, we bagged our 3rd hill of the day and made plans for a descent by the Allt Nam Meirleach - initially a brilliant path but it does get boggy further down. A wee Scotty dog seemed to take a liking to Darren and would have followed him back if it wasn't for the fact this his companion smelled like a rotten cabbage - I was honking! Well, I don't mind saying but by this point I was really running on fumes. Did I mention I was buggered? Darren seemed quite tired too so in a strange way, I didn't feel so bad. A little bit of schadenfreude never hurt anyone. As we approached the cottage at Coiletir, we saw a sign telling us to ascend by a fence around the cottage - we were less than happy as we were both buggered but we battered on and with some relief, got back to the car just in time to find out that Man U had won - Darren was happy. I was totally ******. However, looking back today, I did thoroughly enjoy myself and a wild camp is an ideal way to start the day - maybe Kinley has something after all...sure Kenneth Williams would have approved - oh, Matron! 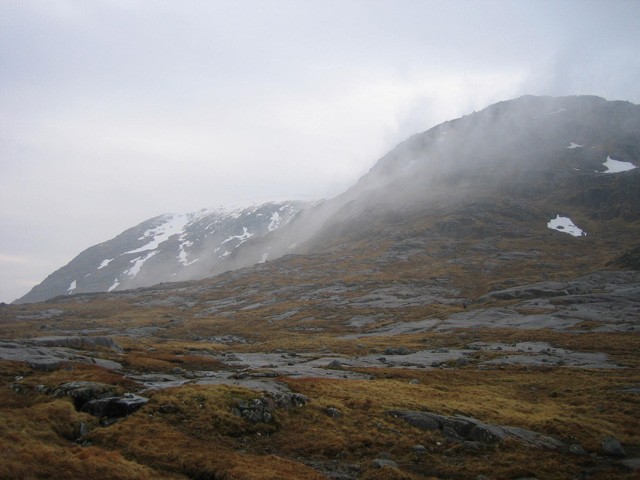 Meall nan Eun - we can see you peeking out 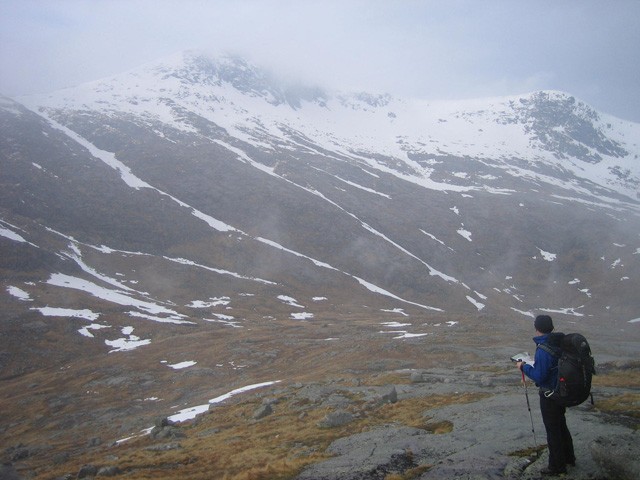 Woohoo - looking mighty fine! The hill that is. Stob Coir an Albannaich - this is gooood It's a hill of great character A brave bunny been over that Albannaich bagged - Darren about to mount the summit Nearly stopped breathing with all that laughing. Nice report and nice pictures.

Kev, you are definateley in the wrong job. You are a natural comedian, get up there on the BBC and make your fortune

Good stuff Kev, the pic with the cloud floating below Starav is very nice. Can I ask what the make and model of the green tent is?

Yup..I can identify with your comment about heating the worms when wild camping

Loved reading your report.. it brightened a wet day

Phew - I was worried as to which lie you'd cottoned onto

Looks a laugh - although I find I sleep better when I spend 12 hours lugging the tent over hills and then pitching. not pitching first

Perhaps I need a disclaimer

Fantastic stuff Kev - I am green with envy!

Great and funny report Kev... but what on earth made you combine Glas Bheinn Mhor with Stob Coire an Albannaich? It's usually done with Ben Starav... I chickened out of that descent to the bealach from SCaA as I hate steep scree - it was probably better with snow... we made a route up from SCaA down another ridge from the summit back to the corrie between it and Beinn Tarsuinn, then we made our way down the interesting and entertaining slabs all the way down the front of Tarsuinn back to the valley...

Stretch - ask Curlywurly about his tent - he had the thing sorted within 2 minutes - well impressed.
MC - I have done Ben Starav already and we actually considered doing Beinn nan Aighenan after - I couldn't have, I was dead on my feet - did I mention that?

Stretch wrote:Can I ask what the make and model of the green tent is?

mountain coward wrote:Great and funny report Kev... but what on earth made you combine Glas Bheinn Mhor with Stob Coire an Albannaich? It's usually done with Ben Starav...

As Kev mentioned, he had already summited Starav and this trip was all about doing things a little bit different. Personally, I don't tend to plan my trips based on the routes most people take. Much better to look at the map and plan something different.

CurlyWurly wrote:Personally, I don't tend to plan my trips based on the routes most people take. Much better to look at the map and plan something different.

kevsbald wrote: we actually considered doing Beinn nan Aighenan after - I couldn't have, I was dead on my feet - did I mention that?

i done BnA itself whilst a fierce bug ravaged my insides i felt nausea,sickness,awful....by the sounds you wer not feeling much grander

the walk out from BnA would have killed you Kev if you felt bad at that point..

Watch when the Kinley mans posts lessen ...AND GET YOUR TENT READY...the weather is set fair when his online usage drops..lol

Fab report Kev, a delight to read... though the geeky grammar guru in me enjoyed the alliteration best of all

I can't wait to get out there for this wild camping!! What a life

Ah yeah - I remember that Ben Starav report now - wasn't it one of your first reports Kev? I don't necesssarily do the routes suggested in the books etc. either but I always consider them and if they are the most logical route I take them.

Michelle wrote:Fab report Kev, a delight to read... though the geeky grammar guru in me enjoyed the alliteration best of all

I can't wait to get out there for this wild camping!! What a life

Ditto that... well apart from the can't wait bit. I'd like to dip my toe (so to speak) first so will try to cadge some kit before taking the plunge.