We'd waited a couple of years and today the great weather gave us the kick up the backside we needed to take on the five White Mounth Munros.

To date four Munros in one go have been our limit.

Started out from the Spittal of Muick on the sunniest of sunny days and our strange tan patterns can testify to the fabulous weather. Car park at Spittal of Glen Muick. A popular day for walking with lots of cars already parked up.

Other than Cairn Gorm, Lochnagar was the most popular Cairngorm Munro that we've walked. Within no time the walkers had thinned out considerably leaving our little group pretty much with the long approach path to ourselves Lochnagar as viewed from Glen Muick....a looooong way to go yet!

The sun burned down relentlessly but no complaints from us as the strong northerly wind kept the temperature almost comfortable. 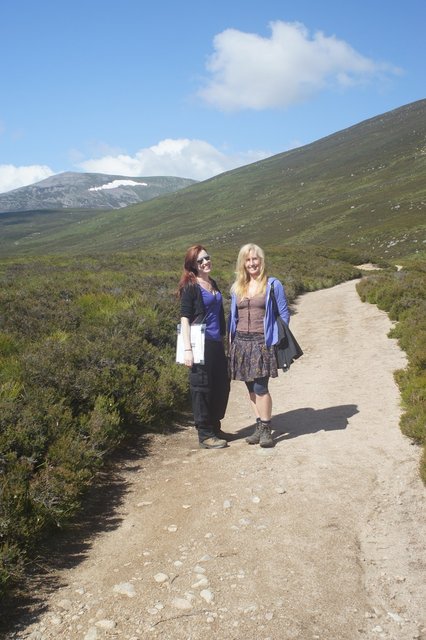 A breather break cunningly disguised as a photo stop! About to ford (well walk through, really) the Allt na Guibhsaich

We passed several resting walkers on our ascent and one wag made a pithy comment on how we "had our Sherpa at the back", referring to my laden down pack-mule Hubs whilst Alice and I struggled with the CONSIDERABLE weight of the map bag and my little camera bag.

A little later we got overtaken by a delightfully stumpy little Jack Russell who rapidly got distracted by the grouse and hurtled off the path whilst pointedly ignoring the recall whistles from his owner. 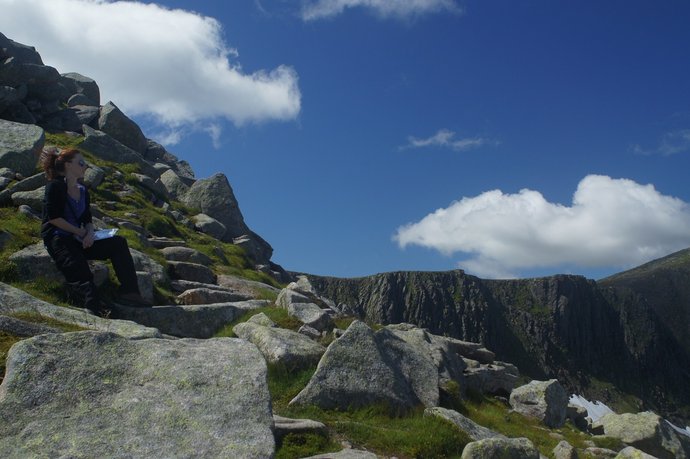 Despite the sun it was incredibly blowy up on the shoulders of Lochnagar. I went up to two layers; the Hubs stayed at one and Alice went to three. Battling through the wind, which kept the temperature comfortable for walking, we made it to the summit cairn on Lochnagar. Up in the clouds on my "Heinz" Munro.

Predictably the views were spectacular and Morven in Sutherland could be clearly seen 86miles away. 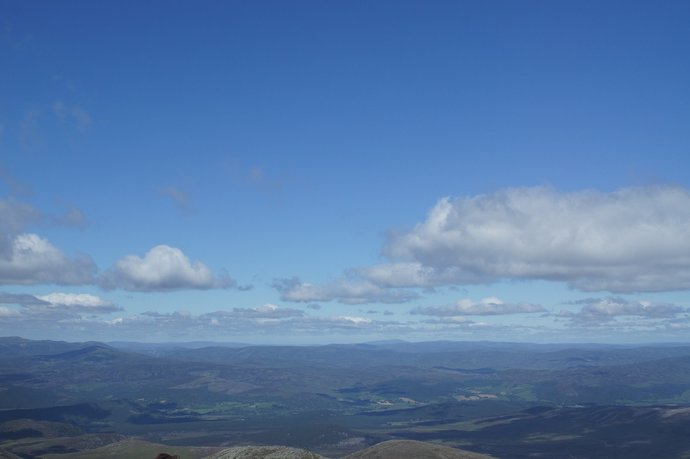 Looking at our wedge shaped local Ben, Ben Rinnes and further still the rounded cone of Sutherland's Morven 86miles away from the dizzy heights of Lochnagar

Could also appreciate how far east lonely Mount Keen is. Alice enjoying her first Munro in just under a year (only four more to go!!)

Descending Lochnagar (our 57th or "Heinz" Munro) we came across two incredibly bold and stately looking deer resplendent in full "Monarch of the Glen" antlers. A pleasant surprise on the way to Carn a'Choire Bhoidheach

Cue a frenzied camera stop from me. Chuffed to bits to come across these two incredibly bold deer

The 2nd Munro of the day; Carn a' Choire Bhoidheach was easy peasy and we all agreed that this one was a great big teddy bear of a mountain. 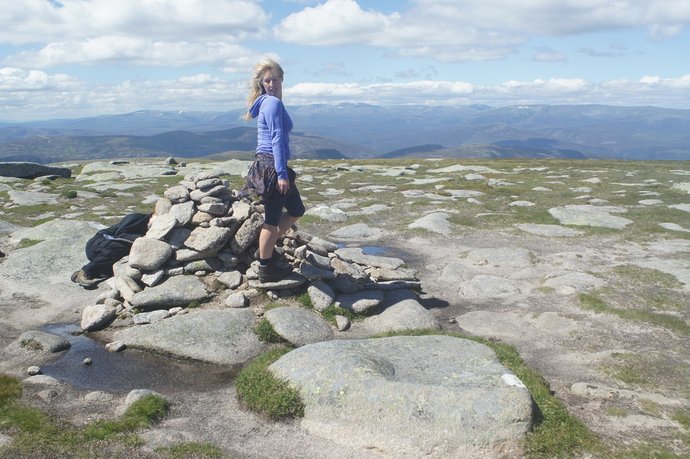 When your daughter points out a rock shaped like "Lion King's" Pride Rock, what else can you do but play at Simba. Roooooaaaarrr!!!

Playtime over it's onwards to Munro no 3, Carn an t-Sagairt Mor. Munro no 3; Carn an t-Sagairt Mor (the hill of the big priest). Oh how Alice and I laughed about that one, given that we were walking with our very own Rev!! Carn an t-Sagairt Mor aka The Hill of the Big priest. Here's my very own not-so-big Reverend Hubs and Alice enjoying the views from the summit cairn. Larking around on Carn an t-Sagairt Mor

Onto Munro no 4: Cairn Bannoch and given that the weather was super sunny we could easily spot the rocky summit and strike out in the correct direction. Must say can easily see how you could go wrong around here in bad weather. The crown of Cairn Bannoch was covered in lots of lovely shin-breakers but fortunately for Team Railton- no casualties. Cairn Bannoch summit cairn. No 60 for me and the Hubs 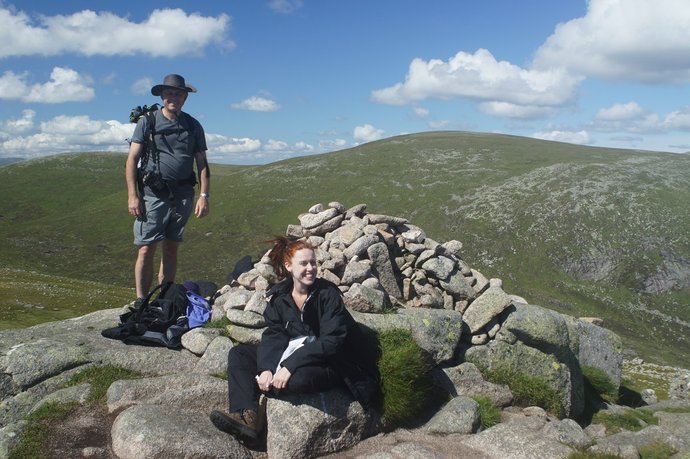 Cairn Bannoch for my Rev Hubs and Alice

The final and 5th Munro: Broad Cairn was again covered with sizeable shin-splitters and the descent was quite a challenge for tired legs. However apart from a wussy calf-graze for me, we all made it off the rocks safely. Enough energy for a last jump of the day on Munro No 5, Broad Cairn........downhill all the way from here (in every sense) Alice hasn't hill walked since August 2013 due to completing her final year at Uni. Here she is with her Dad on her 5th Munro of the day and her 40th to date. Really proud of our girl

The long return (the path looked like it was going on for ever prompting me to questions the Hubs several times re: the return route) was not as bad as we'd feared it was going to be. The spectacular views back up towards the horseshoe of five mountains helped as did the very pretty views out over Loch Muick. Beautiful Loch Muick on the descent. Could've happily had a swim in here :)

Eventually caught up with all the "Lock Muick Circuiters" lower down looking rather pristine. Hoped that our sweaty, bedraggled appearance spoke of our epic journey and they didn't mistake us for a group of wimpy numpties. Really aching as I write this but what a day! Worth every ache.....and yes I'd do it again.
Completion of these five Munros now make a rather nice blue patch on our Munro map.
Walked by Sarah (57-61), David (57-61) and Alice ( 36-40)

Congratulations! That's quite a major outing on a hot day. Did you manage to find water refills along the way? Your tally is really creeping up now.

Really did love your deer photos. Round these parts they are (rightly) terrified of humans and you see a blur a mile away running for their lives!

[quote="AnnieMacD"] Did you manage to find water refills along the way?

Thanks Annie. The water (which was plentiful) was carried by David (aka our Sherpa!). Alice got the map bag, I'm in charge of camera equipment and poor David has the rest. It was really hot but the strong winds kept the heat at bay.

As for the deer, they were so bold. Weren't bothered by us in the least. I took about 40 or so piccies before they casually sauntered off. They were cool deer