My niece Emily has on several occasions expressed curiosity about these Munro thingeys that I occasionally insist on dragging myself up - and now that she has reached the grand old age of 9, she quite fancied trying one herself. My sister, despite nursing an old War Wound in her knee (exacerbated by the recent stresses of the Mums' Race at School Sports Day, I'm told

), felt up to giving it a go too. And so the three of us found ourselves in the big Rowardennan car park one sunny Sunday morning, ready to tackle the mighty Ben Lomond. 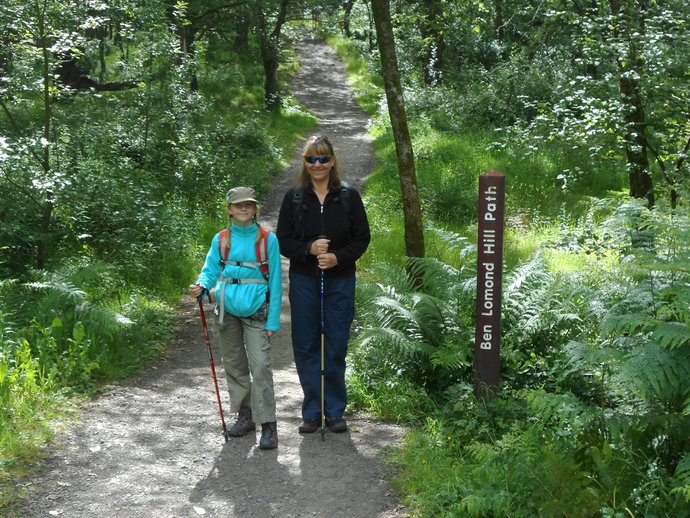 It was a grand sunny morning, and to be honest I'd forgotten what stunning views this hill enjoys on a clear day. Before long, we had a grand view of the Cobbler on the other side of the loch: 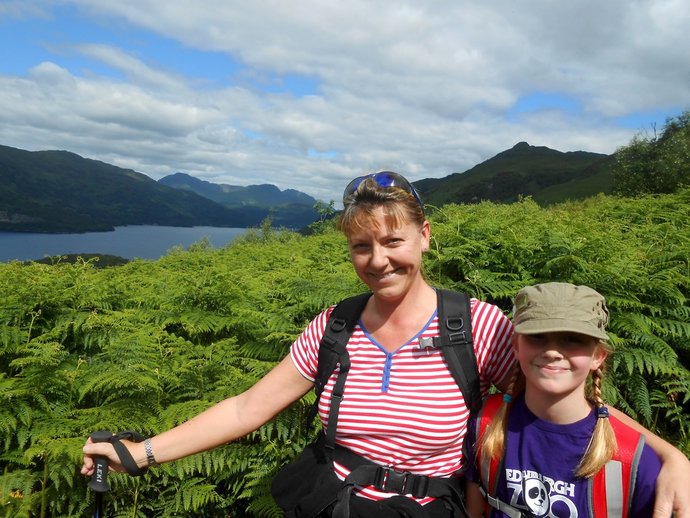 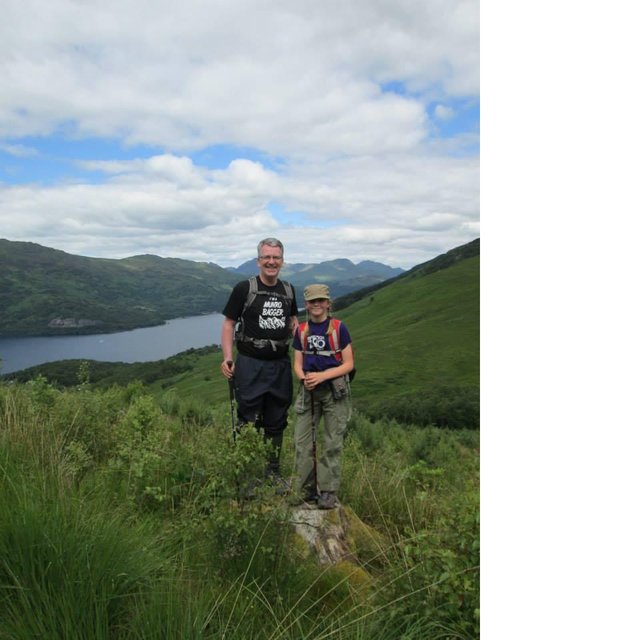 Emily had set off at a cracking pace

... "Slow down a bit there", I commented sagely, "or you'll run out of steam halfway up". Chance would have been a fine thing... She was a good hundred metres ahead of us all the way up, and we rapidly got familiar with the sight of her sitting on a big boulder, admiring the scenery while she waited for us to catch up 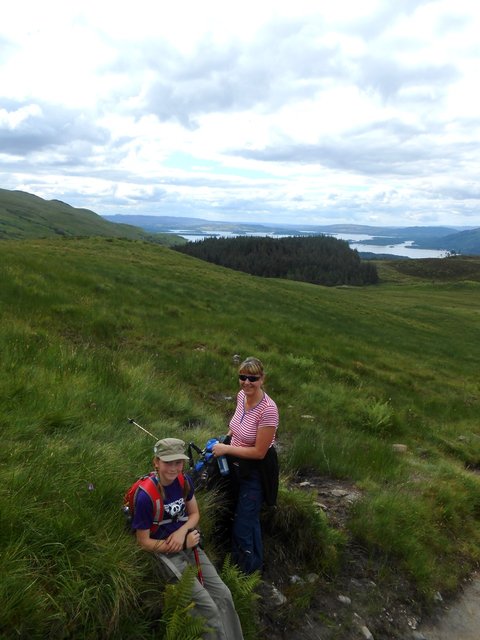 As we gained height, there were grand views over the south end of Loch Lomond with its many islands. 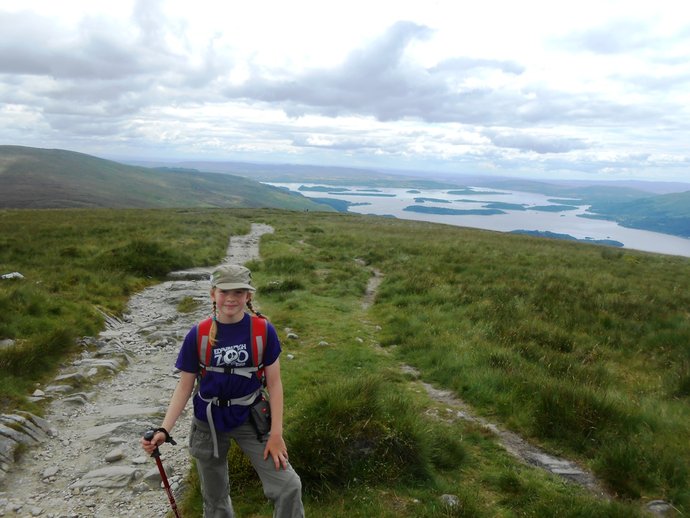 A bit further up, and yet again, Emily waiting patiently on a big boulder until the Oldsters caught up with her 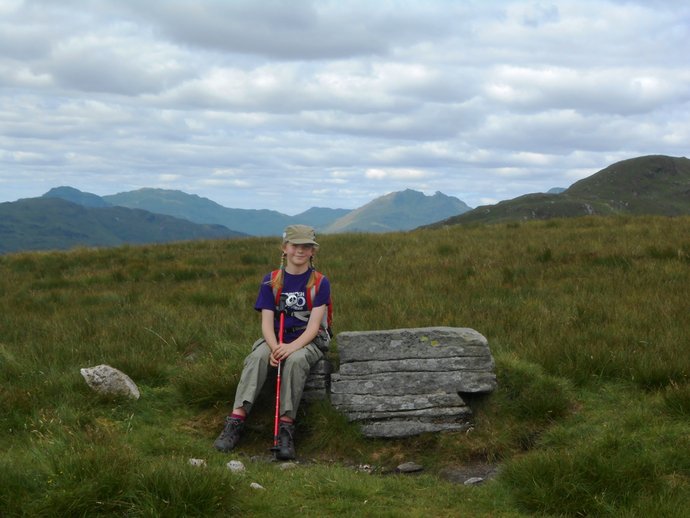 We eventually reached the summit ridge, with its grand views over Lomond's surprisingly rocky northern corries. 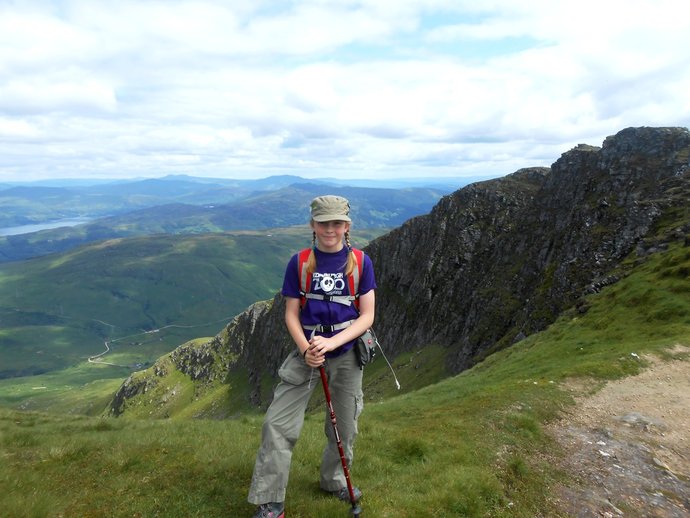 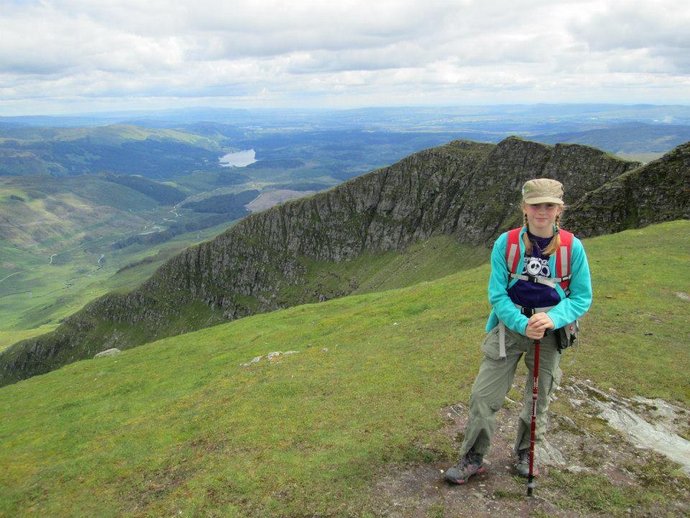 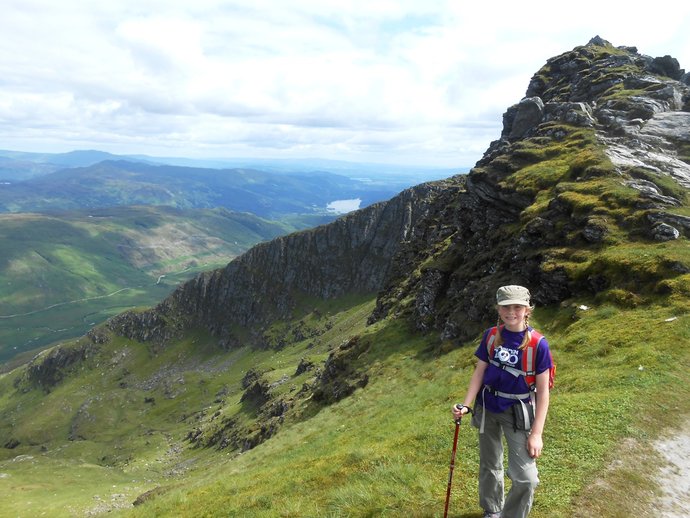 ...And not far from here to the summit, where there was a handy Trig Point to pose on! 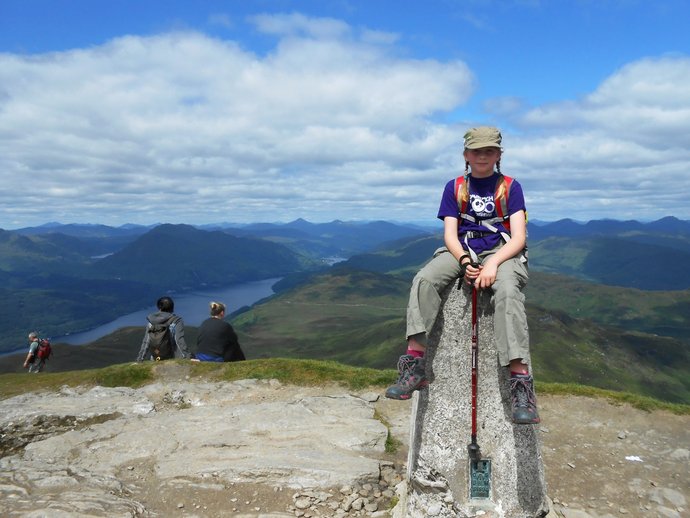 After some complex high-level negotiations, we even persuaded her to part with her baseball cap for a bit 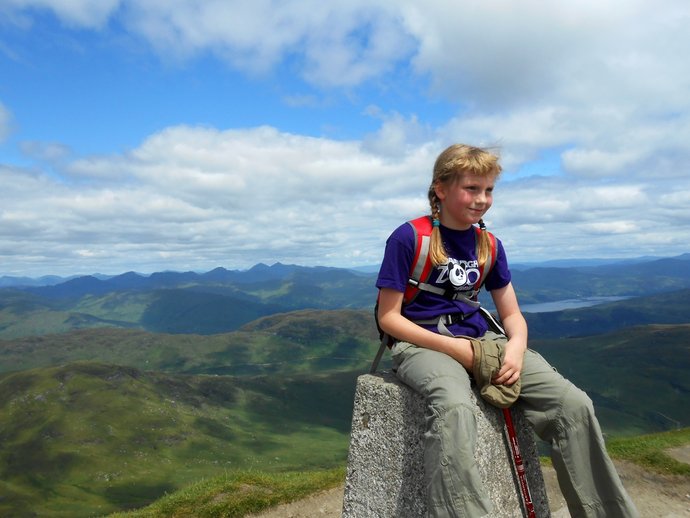 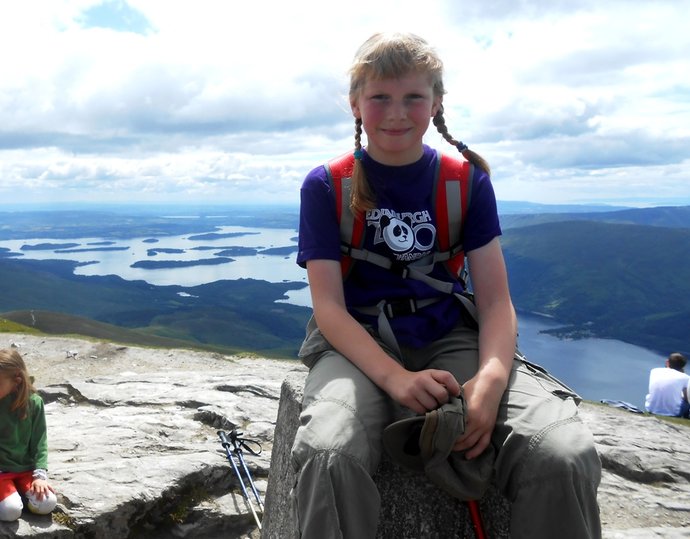 Time for some family team photos 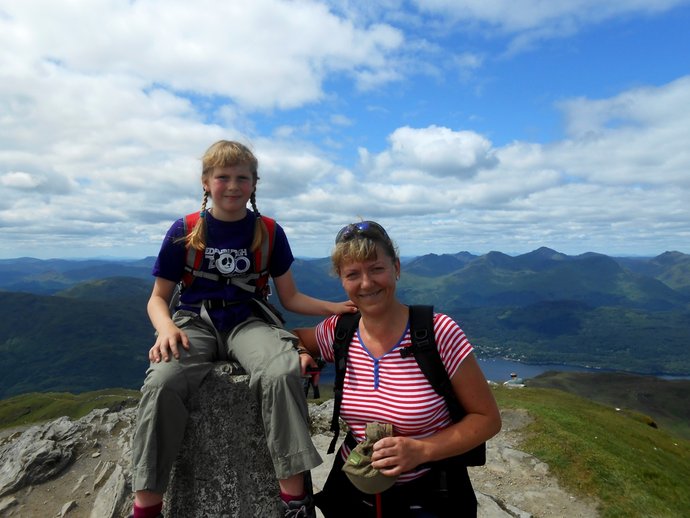 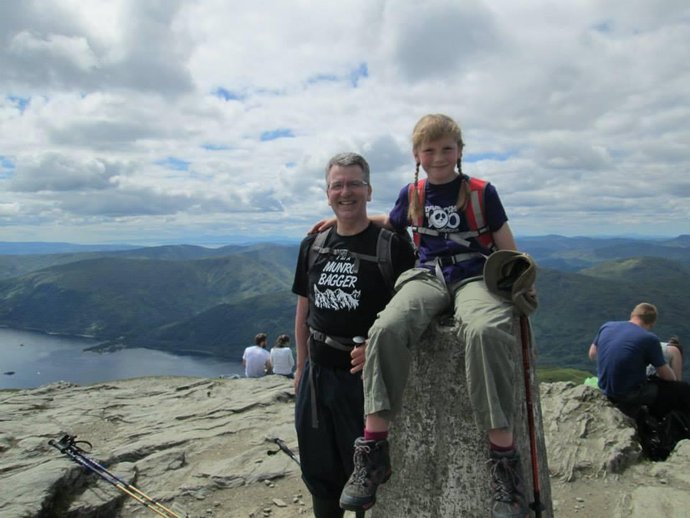 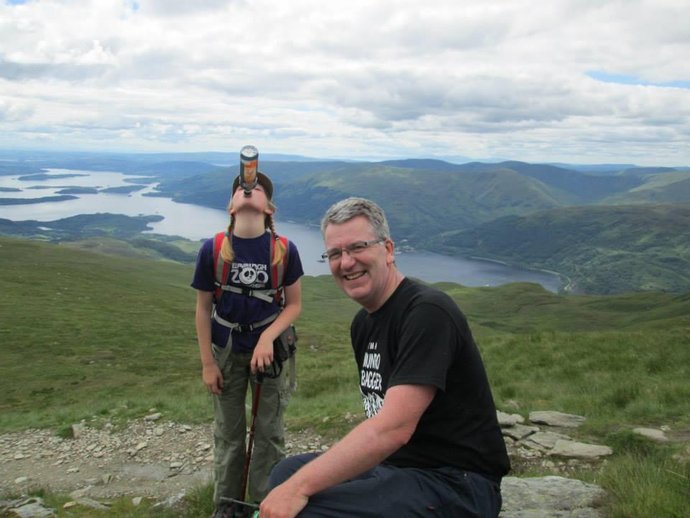 Now I've been up Ben Lomond a few times before in my youth (five, to be precise), but boringly I'd always just gone up and down the standard Tourist Track. This time, I rather fancied trying the more interesting Ptarmigan Ridge descent, particularly since Emily seemed to be enjoying the scramblier bits of track so much. Once again, she led the way, clearly wondering what was taking the Wrinklies so long 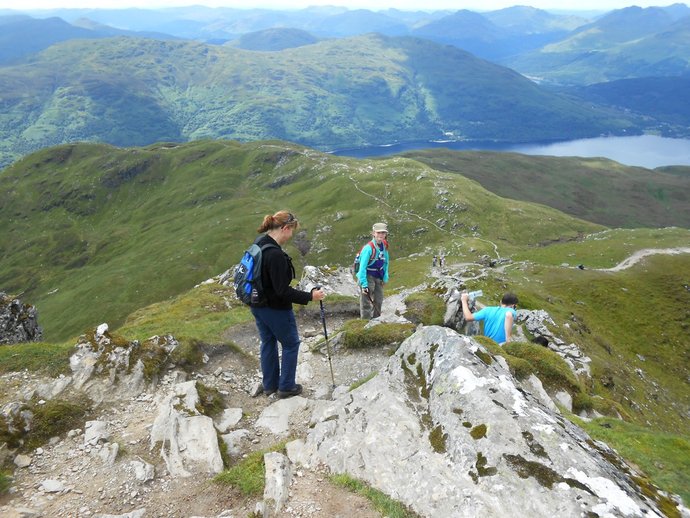 It's quite a steep descent, and my sister was suffering a bit from the War Wound 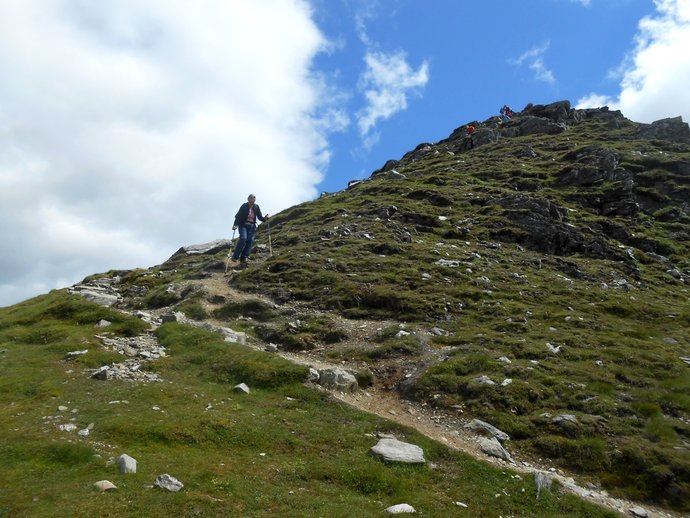 Emily still showing little sign of having run out of steam: 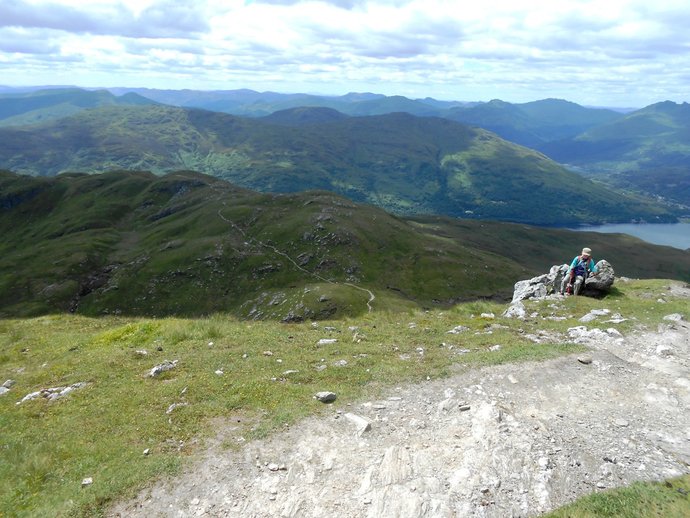 Ben Lomond looks decidedly more impressive from this angle than from the standard Rowardennan ascent route. 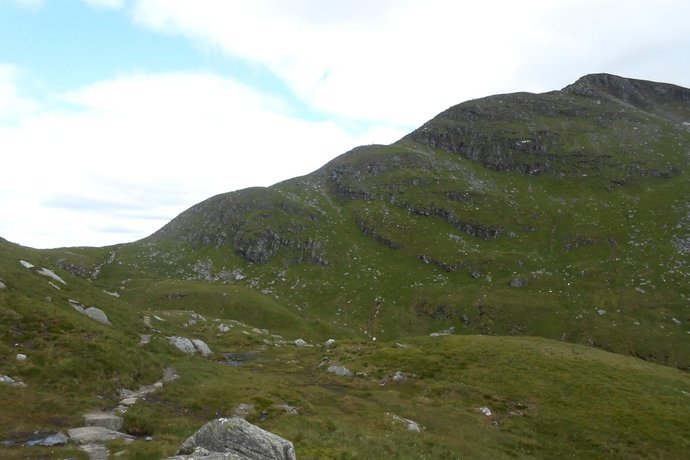 Another panoramic view of the Cobbler: 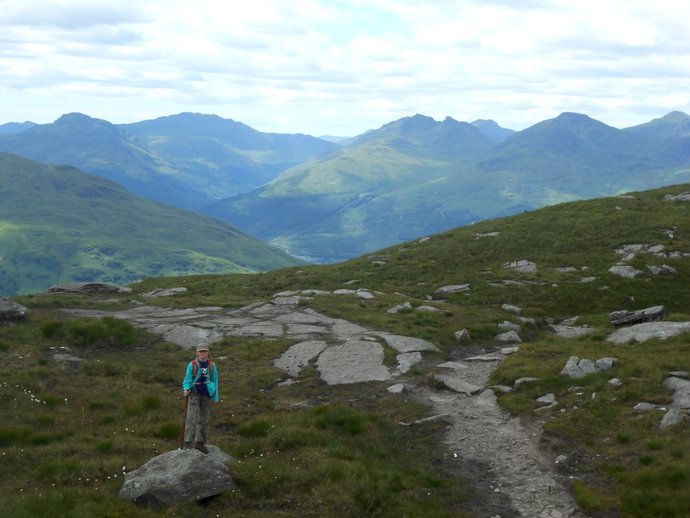 They're a piece of cake, these Munros: don't understand what all the fuss is about 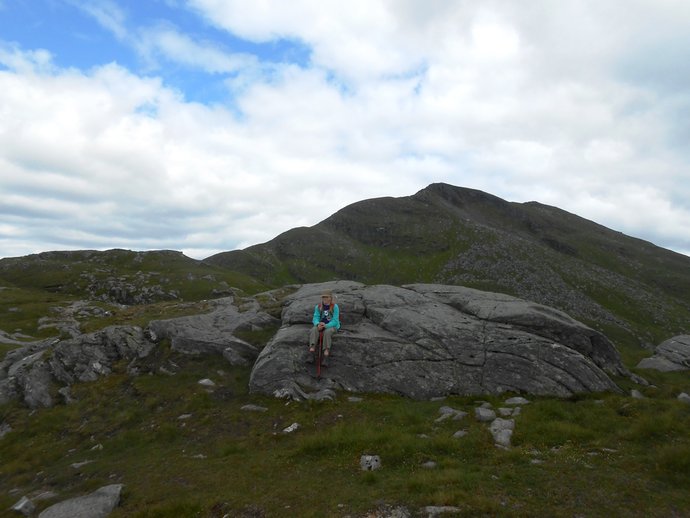 A bit lower down, our dynamic Expedition Leader found a wee lochan, and had great fun running round it picking bog cotton, or "Bog Fluff" as she had decided it was to be called 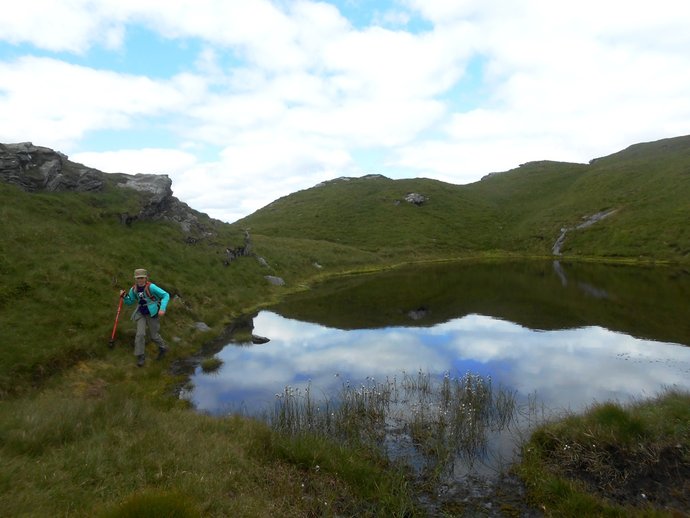 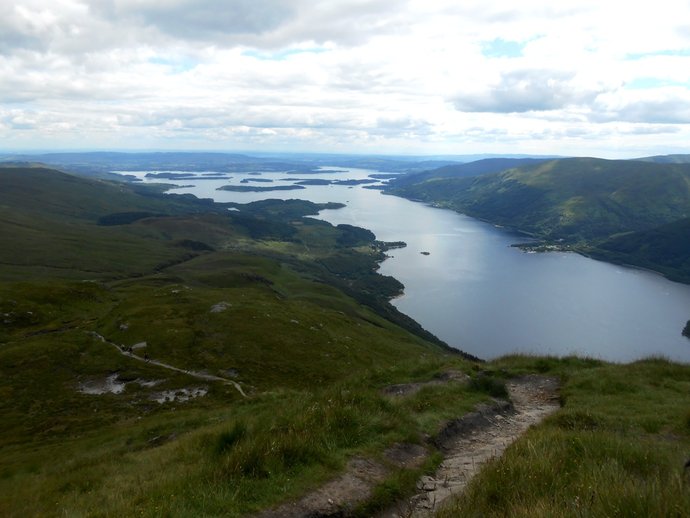 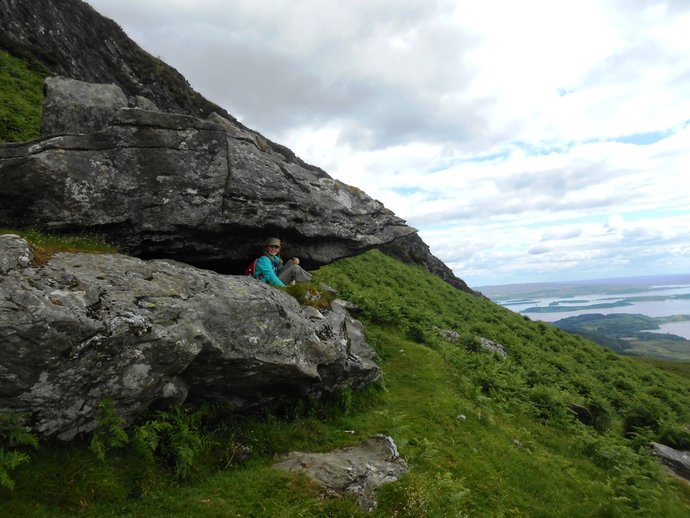 We were very lucky with the weather - the Ben was certainly showing us all its most photogenic angles today. All the same, Emily certainly seemed to enjoy the outing, and didn't really seem to break sweat

. Hopefully the first of many Munros for her!

Yes! Well done, great effort and always lovely to take the ridge back down

Great stuff another Munroist in the making? Looked a fine day for a first hill

Great to have limitless supplies of energy. Great photos - you got a great day for it.

Well done you three - suggest you negotiate an energy transplant with Emily, just to even things up a bit (and if there's any left over let me know)

Well done to Emily! I wish I had her energy

I am sure she will be itching to do another in no time!