"Iconic" is the standard descriptor for this mountain. "Throws down the gauntlet" tends to be the other one. Actually, I tend to feel that on the many previous occasions when I've driven up the A82 past the scary-looking conical fortress of Stob Dearg on the way to some mountain more suited to central-belt softies such as myself, it hasn't so much thrown down the gauntlet as hurled it at my face, followed by a barrage of elaborate taunts along the lines of the French knights in Monty Python and the Holy Grail

... "Your mother was a hamster and your father smelt of elderberries!" (Guilty as charged

!)
However, I was going to have to tackle this pair of Munros sometime, and given the unlikely combination of a day's Annual Leave towards the end of June and a very promising weather forecast, there probably wouldn't be a better time.
The snow has of course been lying unusually late this year, and when I'd driven past earlier in June, there was still a worrying amount of snow lying in upper Coire na Tulaich. However, I hoped that the much warmer weather over the past week might have melted the worst of that. I got a reasonably early start, and Stob Dearg was just looking unfeasibly scenic from the side of the busy A82. Or maybe it was just looking unfeasible However, on approaching Coire na Tulaich up the excellent National Trust for Scotland footpath, it maybe wasn't looking quite so scary after all ... and thankfully, the worst of the snow did seem to have melted. It's some bit of construction, this path: I take my Bobble Hat off to those NTS volunteers who built it

. The original scramble up the loose scree-filled gully to its left must have been a tad less enjoyable It's a steep climb all right, but otherwise it wasn't nearly as tricky as I'd expected. Even the last wee section, which features a mildly exposed scrambly bit up a rib of rock, turned out to be more exhilarating than terrifying. Thankfully no Snow Complications either All the same, I was a bit peched by now, and it was a relief to reach the big cairn where the path meets the ridgeline at the Stob Dearg / Stob na Doire bealach. Thankfully, it didn't look too much more of an ascent up the final rockpile of Stob Dearg's summit round to the left. It's interesting to see how Stob Dearg got its name ("Red Peak"): up close, it is indeed covered in big red boulders. Always nice when a hill does what it says on the tin.
On reaching the summit cairn, those famous views opened up over the watery desolation of Rannoch Moor.
I had been overtaken by a friendly chap back at the cairn on the bealach, and I met him again at the summit, taking photos in all directions. "Ah, it's good to be alive!" he said, and I could only agree. 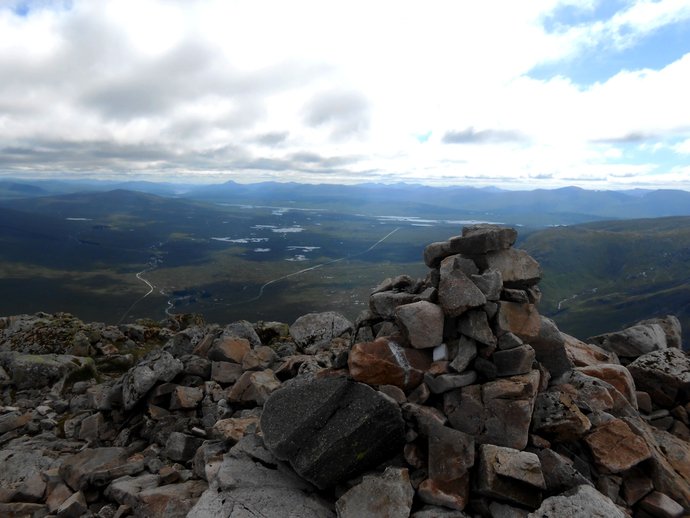 A raven (or maybe just a big crow

) insisted in posing photogenically for us, so I took a couple of snaps. There was a fascinating view across Buachaille Etive Mor's wee Buachaille brother to the complex Bidean nam Bian massif: much easier to see how all Bidean's various ridges link up from this perspective than when actually climbing the thing The other show-stealing view was the one down to the Ballachulish Bridge: Enough already with all this standing around taking photos, though: I had another Munro to climb, so it was back down to the cairn to tackle the rest of the ridge. Next up is Stob na Doire: this is another well-defined conical peak, fairly steep on both sides, and it's something of a surprise that it is the less dramatic Stob na Broige at the far southern end of the ridge that has managed to get itself promoted as the second Munro, rather than this one. I stopped for a wee breather halfway up and drank in the views back along the ridge towards Stob Dearg and Rannoch Moor. More interesting views across to the Bidean nam Bian massif to the east: easy to see how its attractively knobbly western ridge Beinn Fhada ("the Long Hill") gets its name. 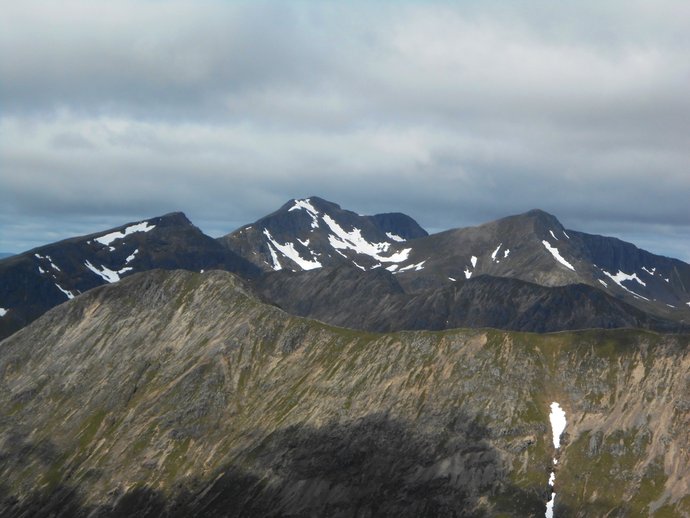 The descent from Stob na Doire turned out to be steeper than the ascent, and while the remainder of the ridge along towards the second Munro was looking delicious, there was a big worrying lump of stubborn snow lying right across the top of the descent track down Coire Altruim, which certainly gave me pause for thought

! This was the day before the summer solstice, too: it just goes to show how much snow there's been on the hills this year. Thankfully the next Top along, Stob Coire Altruim, was a much gentler peak despite the impressive crags on its eastern side. It had more grand views, too. It wasn't much further now to the end of the ridge, where the summit of the second Munro, Stob na Broige ("Peak of the Shoe" - answers on a postcard, anyone

?) is marked by a big cairn-cum-stone-shelter. I went on a wee bit past the cairn to enjoy the spectacular views down Glen Etive. From here, there was also a grand vista right along the classical ice-gouged trench of the Lairig Gartain. After a quick lunch stop, it was time to head back to the top of the Coire Altruim descent path (at the Stob na Doire / Stob Coire Altrium bealach), where that big lump of snow had to be tackled. Fortunately this was easier than it initially looked, and I managed to bypass it by a fairly straightforward scramble down the steep grassy slopes immediately to its left (south). All the same, it was a relief to reach the path. This is another amazing bit of construction by those NTS volunteers, and it certainly gave a rapid descent, despite a hairy moment or two on some big rock slabs about halfway down. In no time at all, I was down in the Lairig Gartain, where the descent path crosses the burn to join up with the main Lairig Gartain track. Despite its fairly unpromising Gaelic name ("Pass of the Ticks"!), this turned out to be yet another scenic spot. From here it was an easy romp back to the car park, along another excellent path which somehow feels cushioned under your feet - how on earth did they do that Some things you just have to experience for yourself, and the Big Buachaille is certainly one of them

Cheers! It was certainly a grand day's weather

Wonderful photos and description. Makes me want to venture into the Deep South