I hadn't really been looking forward to this set of Munros. Everything I had heard and read, was pointing towards them being a pretty dull walk, which were only there to tick off the list. I find it hard to believe that any high level walk in Scotland, where you can see far and beyond, could be classed as dull, especially if you got the weather. With a decent forecast, I set off to Glenshee from Glasgow, aiming to complete the full circuit of 9.

For one reason or another, I was late getting away, which put my plans at risk, and ultimately I decided 6 would be enough, although I never say never. The windy roads from Perth also took the time off me.

There isn't much to say about the initial ascent. Although I was pretty surprised to find that the ski center didn't have any OS maps, so I was left a bit unsure as to whether I was going the right way or not at the start. It soon became clear, and within about an hour and a half, I was on top of my first summit of the day, Creag Leacach. The view, despite the ski center, were pretty impressive. A pretty clear day, although, to my annoyance, I could see dark clouds coming in, and pretty quickly, so it was going to be one of those race the weather days!

The second summit of the day, Glas Maol, came pretty quickly, although, the weather was coming in even faster than I thought. I met an elderly gentleman, who was giving up on account of the impending weather. He heard me piping from the first summit, and gave a wee chuckle. I managed to blast out a quick tune on the summit, then hid my pipes under some well positioned rocks, and hoped for the rain to pass. I waited, and waited, but it was not showing any promise. It was decision time! Go home after two, or keep waiting. I decided to go home.

As I started my descent, I got a phone call. This was a call I had been waiting for. It was to tell me I had been offered a job working for the Glasgow Life gyms! I was delighted, as I had given up on the job due to the time taken to contact me. And believe it or not, as I hung up, I could see the sun breaking through. It is amazing how things can happen all at once. This was a sign, not just for the day, but for life in general...you are always seconds away from life changing events and decisions. Not that carrying on was life changing, but as I picked myself up to carry on, I felt very empowered that I wasn't letting things beat me. ONWARDS AND UPWARDS.

Third summit was reached, Cairn of Claise, was reached, although it took a while due to having to re-climb a lot of what I had already done. It felt like number 4 for the day, not number 3. Not much a write home about for this summit, but again, nice enough views in all directions. On to number 4, Tom Buidhe. Another "dull" hill, but if you look at some of my pictures, you will agree it aint all bad

I don't think so

It was a little bit like climbing up a big sphere, as it kept going and going, but I got there! 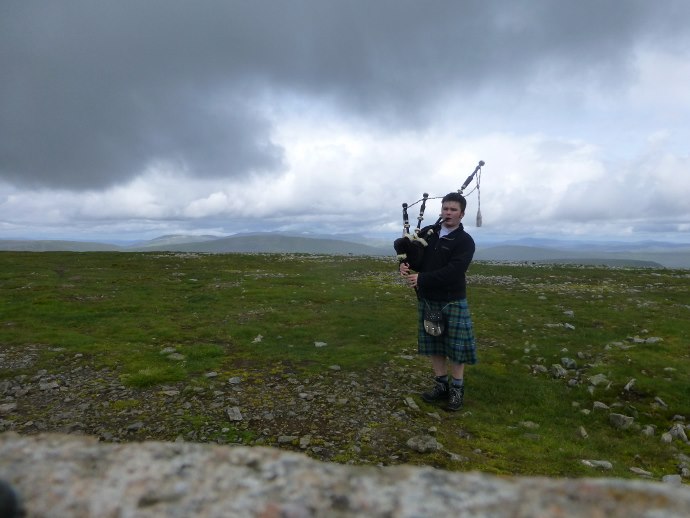 From here, the final two summits looked SO far away, and the weather again was turning a bit. I made the decision to carry on, on the basis that it was just as far to go back as carry on...the things you think sometimes haha. There were lots of tracks on this route, and the ski resort was starting to to show itself, so I was getting there. I followed the wall up, and there I was. This summit was made a little more interesting with its excellent cairn, but also by some spectacular views in all directions again. I don't know what folk are on about when they knock these hills. The ski center isn't that bad, says the ski/snowboarder :-p. Right...on to the last one!! By this stage, I wanted home, I really did. It looked a simple down and up, then down to the car job...although due to not doing the other three hills now, I had a surprise in store. Again, no real dramas getting to the top of Carn an Tuirc, probably because I was blasting through and just wanted to get there. Once again, the weather turned, but this time there was no hanging about. This time, it was get my picture, and get off the hill! It was now, that my up and coming slog was becoming more clear. As I looked towards the road, I could see the massive climb that was going to be required in order to just get to the ski center, and that was before the walk DOWN to the car. I had originally planned to "skip" this by continuing my climbed up The Cairnwell ect, but underestimated the time, and also the condition I would be in at the end!

Nothing else for it though, but to keep on going, so I did. The trudge was made easier as I got phone signal, and was reading the lovely messages of support I was getting for my new job. The descent from the hill was fairly straight forward, but oh my, was that climb by the roadside soul destroying. Even the views of the hills couldn't help. I wanted a beer, I wanted a cake, I WANTED HOME, but that road just kept going! Looking back, big slog still ahead though

As I got to the top of the road, at the ski center, I was surprised to see an "open" sign beside the cafe. This joy was short lived, however, when I discovered this was just a horrible joke played by the staff who wouldn't be bothered changing the sign to CLOSED! Didn't they know I wanted a muffin!?

Onward I went, and just about to call my other half to inform her I wouldn't be back in time for the takeaway we planned...when...as far as I was concerned, a gift from the heavens arrived...a local offered me a lift to the car!!! Never have I said yes so enthusiastically, as when I answered the question "Do you want a lift?". It is just as well, as, although I knew I still had a bit of a walk ahead, I really mis-judged just HOW FAR it was.

I made it to the car, packed up, and was on my way. Chinese takeaway, and cidre, at home here I come!

A very successful day, and great to do such a long one again. So satisfying looking back, and remembering my day. It was even more satisfying knowing that I had first waited the weather out, then beat the real downpour. Let me tell you...Chicken Chow Mein and Cidre have never tasted so good. I got the bug back, and want more...show me the hills!!!!

congratulations on a big round, and getting the job and making it back for a chinese

can't believe you thought of adding the other 3 as well, that would have been a truly epic effort

That is some route and carrying bagpipes and wearing a kilt - well, respect from me.

I played the pipes for over a decade and jacked it in fairly recently. Decided running around a muddy field in a kilt drinking warm tins of tenants wasn't fun when I waved goodbye to my teens! Definitely wasn't a very ladylike image

I wouldn't have been dragging something that heavy up a hill with me. Do you have some kind of waterproof protection for them?