our_route.gpx Open full screen  NB: Walkhighlands is not responsible for the accuracy of gpx files in users posts
This trip has been on my mind for a long time since reading a report from MountainThyme and boy was it worth waiting for

. Bearing in mind I had never been on a ferry before this meant a bit of planning, not just the usual of getting up early and driving but all the fuss of being on time for ferries on and off the island

So my day started at 4am when the alarm woke me from a very shallow sleep, because of all my worry of the weather, the drive, the ferry and the hills I was like a wee kid, all excited about my day

So the usual fuss first thing of sorting sarnies, breakfast, filling the rucksack and also sorting food for wee Jura`s day (she is the new pup who is a bit young for the hills) and also a note for my dog walker. Thunder birds are Go at just after 5am and what a morning it was just gorgeous, the forecast looked like it was going to be correct again

The drive went well at around 70 miles it seemed like in no time at all I was there and the worry I had about parking (£3) was not needed so ticket bought (£11.35) and off I went on my wee adventure . So I got on the bus and the plan was to go on a clockwise direction from Glen Rosa but I missed my stop and ended up at the bottom of Goatfell

no worries though a wee look at the map and I was off, but by this time the weather was playing tricks and it was drizzling fairly heavily and I thought, bugger its going to be a pants day and the forecast was wrong but as I was here I just had to go for it and before long the cloud started to break up a bit and I thought maybe the forecast was correct after all, and just as I was approaching the summit of Goatfell it did not disappoint and things just got better all day from there. The Saddle and Cir Mhor

and past the dolphin that eventually takes you to the saddle it seemed that there was a bit of security waiting for me in the form of a pretty healthy stag and he just wasn`t for moving (15-20ft) from me ! And next was that path that has already been commented on and up the rocks and that was that Cir Mhor summited. So on I went on a fairly non eventful walk to Caisteal Abhail The Wee scramble up to the summit of Caisteal Abhail

, did my summit pose 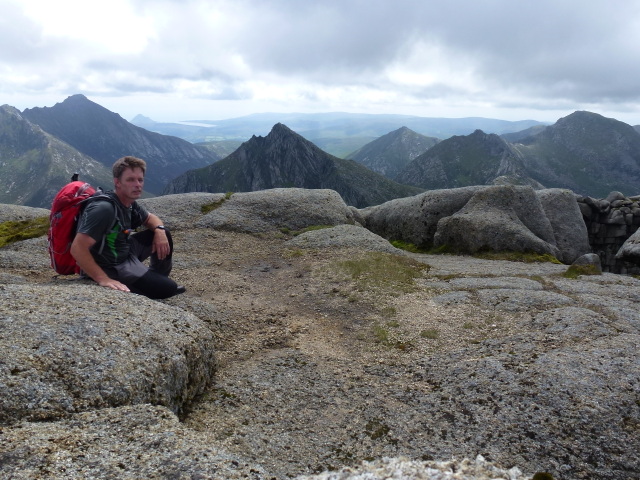 The guys I met on the Cir Mhor Summit, Zoomed

From here it is an easy retrace of your steps back towards Cir Mhor but not quite summiting again but just skirting around the side about 100mts or so below the summit on the west side again (just follow the path). Before long Beinn Tarsuinn realy started to become a reality and that Ridge Me on the summit of Beinn Tarsuinn

. I sat on the summit for a while and just took in the stunning views as it was only around 330pm The Old Man and Brodick After 20 min or so I thought I had better get going. So its not long and you are off the back off Beinn Nuis and you can see the path meander across the soft ground below, this part of the day was the only time all day that I had encountered the dreaded CLEG and they were hungry ! This last bit is a long walk but I just dropped a gear and did a bit of a route march just to get back to the tar road where hopefully I would get a bus back to Brodick, but No I had just missed the 445pm bus and there was not another till 545pm so I was just as well to walk the last couple of miles back to the village via the co-op for refreshments and a wee seat on the beach for half an hour Stats for the day Add half hour because the sats didn't find me till around the bridge on Goatfell?

then it was ferry time again, I managed to get the 6pm . Tonight (Wednesday) as I write this I fell as stiff as if I had just done week at the tattie howkin

but I guess that's just an age thing, a day or two and all will be well, I hope

Just my kind of hillwalk. Rocks to climb over and strike silly poses, steep cliffs to look down from, dolphins on land...

Wish I had more time to travel around Scotland. For me it looks like a week off on the island (I know there are castle ruins to explore, and I wouldn't miss some lurking on the coast). Maybe next year...

Cir Mhor was the first "proper" hill I did with my school, back in the early 80's when health and safety wasn't outranking common sense.

Pretty sure it was claggy that time so nice to see the huge drop the teachers were being so paranoid about.

Think a return trip shall have to be planned for Arran. Do you think the Spaniels would manage the scrambley bits?

electricfly wrote:Think a return trip shall have to be planned for Arran. Do you think the Spaniels would manage the scrambley bits?

The above route should be no problem if you take all the easy options (keep E of the crest between Goat Fell and North Goat Fell, skirt the final section to Cir Mhor on the S, and the whole of A'Chir on the W). Probably best to avoid the Witch's Step, and Cioch na h-Oighe.

Looks fantastic. Never been to Arran but may need to change that.

Do you think the Spaniels would manage the scrambley bits?