Looking down on Lochan na Lairig reservoir and dam.

Time to shake off cobwebs of long weekend in Bologna. Judging by the sweat, must have been an even longer weekend than I remembered! Anyhow, should be fit to drive five days later, so off east along the increasingly familiar route to Killin, where weather looked favourable. Thought I might make the Tarmachan Ridge, or if conditions/fitness unfavourable, at least make the Munro?
I think I was the first arrival in the car park that morning and this time had the money to pay my dues. The camper van already there, I'm sure had lodged overnight and got me a bit irritable. Anyway, no one to argue with about such an issue, so it was soon forgotten, as I made my way up the well made path for Meall nan Tarmachan. The going was not too tough, even as one turns northwards to ascend the broad ridge to the 923m top. From here the route drops down over a style, before a stiffer hike up steeper, more rocky ground to reach the 1044m summit, in just over and hour and a quarter! Great appreciation for the road builders up to the car park. Truly a quickie, if that's what one is looking for! Conditions looking good, though mine less so. Views fine and rest of ridge looking too tempting to retire now, so after a few pics, it was off along the clear track towards the distictively sharp looking peak, Meall Garbh, which catches the eye from well down the hill. A pleasant walk to the SW, passing nearby a nice wee lochan to the north and up to the more spectacular looking summit, as the ridge steadily becomes more "interesting." The route narrows markedly at this point as it drops from Meall Garbh, heading for the rocky, scrambly bit. What to do? Just me myself to deliberate. Try and prove I still have some head for heights, or take the easier by-pass route? Firstly, I had spotted the escape route, which I thought was more visible than some reports had suggested? Perhaps, others were doing the sensible thing?
Anyway, I thought the scramble didn't look too daunting and it being dry, decided to go for it. Well, I have to confess, I did get in a bit of a fankle! Perhaps, I ought to have got the walking pole, or camera more securely out of the way, or maybe I picked the wrong one, of several possible routes? Bit frozen at one point, but reversed and tentatively edged my way down. Looked surprisingly long way down, as doubts about my wisdom began to loom large. After what seemed like a long time, I was running freely down the slope, mightily relieved to have got that over. Next time I might enjoy the luxury of a possible easier route, though looking back, I wondered if it would be so, on what looked like a very steep, grassy slope round the side. Down the scrambly bit. Pulse rising. Back towards Meall Garbh. Escape route round scramble can just about be made out - if you've good eyesight, or specs on! 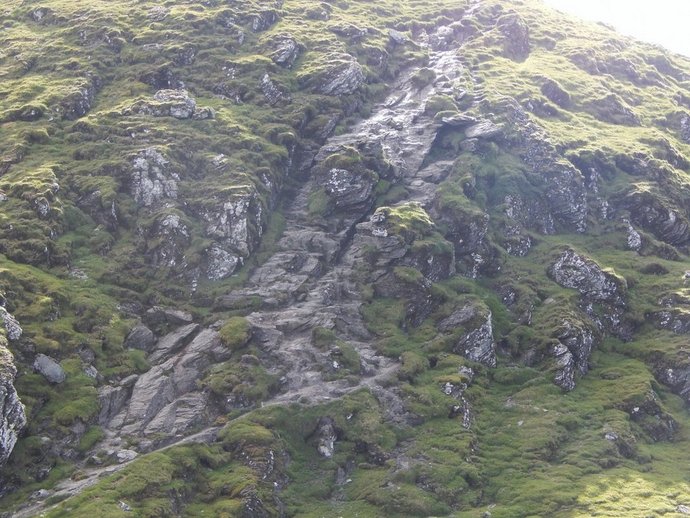 How it looks from below. Time for a breather and some refreshment, before heading on to Beinn an Eachan and the top of Creag na Caillich, neither of which I recall giving me much problem, other than stopping to enjoy the views and taking photo's. Path round Creag na Caillich. A ridge too far - for me. Glen Lyon hills, Ben Challum one side, distant Cruachan the other. From there, I chose not to proceed onwards round the airy looking path, but returned to the bealach and made my way down the steep, grassy slopes below Beinn an Eachan, heading round in a SE'ly direction to the quarry and onto the track, which leads back to the car park in 4.6hrs. (If I remember rightly, my left knee was giving me gyp from about Creag na Caillich down.) 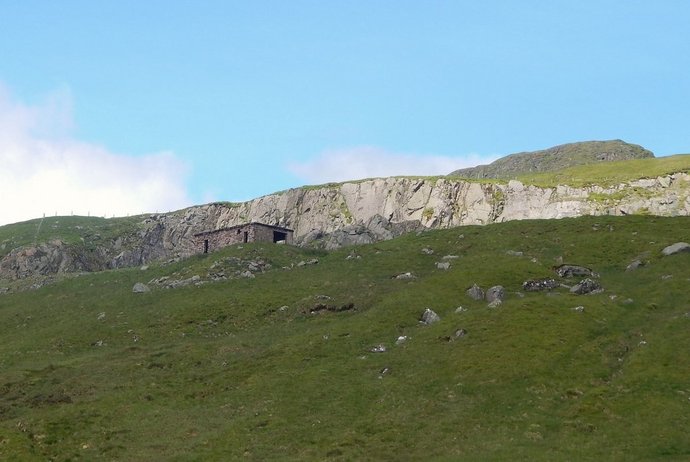 Lochan na Lairig dam from below. Back to Meall Garbh. Towards Beinn an Eachan, with Glen Lyon behind. Wee lochan on rhs. There's a smaller one on left, too.) 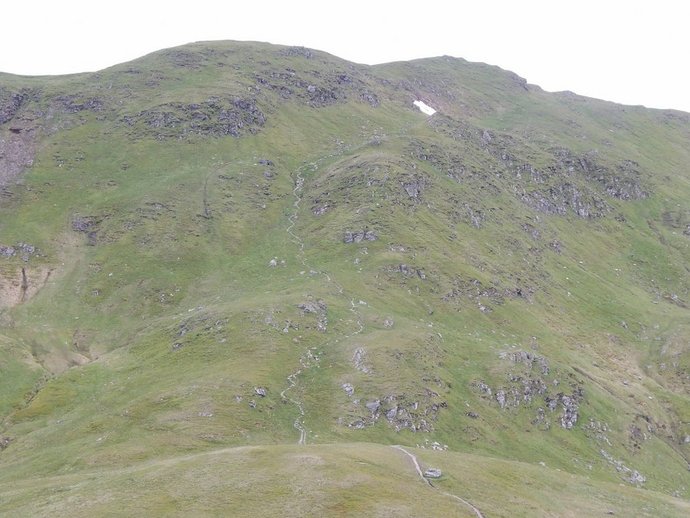 Windy, final path up to summit.

Good for you knowing when to call it a day. Great photos - looks like a lovely area.

Thank you, Annie. Looks like you've been tramping some braw territory yourself! 60 on the Spidean. Superb!