Always amazes me the accuracy of the weather reports. As I drove towards my destination various signs warning of heavy rain forecasted did make me wonder if I would see any thing except big fat rivers of water running off my waterproof's. To my amazement, the report was dead on the button and I even left for home with dry feet; at 04.00 in the morning I rested amongst the jagged stones that litter this Munro ( and its entire ridge) with perfect views all round of other mountains suffering to more or lesser degree's of cloud cover which was constantly moving with the strong wind, as forcasted with only the presence of fog clouds swirling around me driven up and over the ridge from the depths of coire lair, that did tend to spoil the view now and again.

it was so warm up their, 900 plus metres above the earth and dressed more for a coastal stroll. I had a really enjoyable 2 hours waiting and watching the sun as it slowly rose above a low bank of cloud from slioch direction.

Never been to this area of Munro before, having been sucked in more by the torridon hills to the north whose dark slopes and ridged tops gave me more then enough to look upon - the sea bay especially looked very primoral in the pre-dawn light. I don't know why I never came here before, the walk was a pleasure through the old woodland accompanied by the music of the river (and annoying midges this time of year) over a well defined track, or well enough to see on the various times I didn't have the head torch on. three cairns appear out of the gloom, signifying three different junctions of paths into the coire - I say cairns, which to me would be piles of rough shaped stones but these were made of blocks of stone like you'd find in a wall; the first was small, the second was 6 ft (the one I'd return on) and the third was just as prominent signifying my departure from the main track.

I lost this track a few times as it quickly took on a very steep gradient, but for the most part I managed to stay with it having a rest just above a lone rowan tree. After that the gradient eased and I started along the ridge to my final destination, which was conveniently at the other end about a mile away over two other tops and various drops between them. by now the light had developed enough to allow me to go torch less, which as just as well as the many haphazard rough stones that litter the ridge would have made the going slower. Their is a couple of goodish scrambling bits if you choose to take the high and not low tracks, mostly tho the views of the two near neighboring mountains to the left and those of torridon to the right make the walk a real joy plus the odd lowing hill surrounded by odd patches of loch or pools add vitality to the whole wild scene, especially under the low tones of light I was viewing them from.

Quite funny that I managed to stay and find most tracks up here in the dark but not so on the way down. The main track is quite visible from the ridge top undulating its way parallel to the river through coire liar but getting down to it was a real puzzler. as you head down I opted to head for the small top marked 769m and descended to the path via an obvious ridge that came off if it.

Got me there in the end and without to much feet in soggy peat moments. you will see some interesting waterfalls along this path and some of those seasonal alpine zone plants like the unique bog asphodel - just love the detail of its form and was keen to take a photo of it by one of the said waterfalls, except 20 seconds after stopping the darn midges had other idea's - maybe later next month.....

Talking of waterfalls their is a good sized one along the first track I took through the woodland just above where they all stop - got a photo of these as it took the midges 3 minutes to figure out I was their.

Didn't really see any wildlife on this trip except for small frogs, oh and three grouse up on the ridge. first cairn on start of ridge looking back along the ridge from beinn looking toward torridon and the sea bay one of the two waterfalls above the woodland. 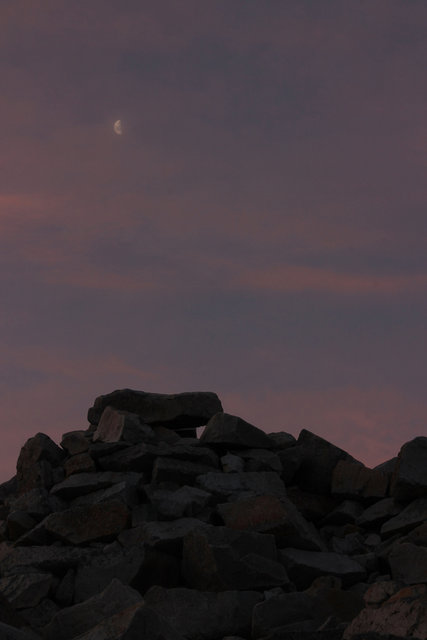 Fantastic set of photos there - especially the first one. I really enjoyed this

You timed it just right. I was up on the summit at about 11am and the cloud was closing in. Great pgotos - I love the one of the Sgorr Ruadh buttress with Fuar Tholl in the background.

that makes a change annieMacD, usually as I go down the cloud clears.....but there was quite a bit of it hanging all around when I was their - I guess atleast you got a better well defined look at the southern torridon slopes.

Experiences like this are really special. I haven't done night stuff, but I like to get off just around dawn. Really liked this unusual report

What was the reason for going up in the dark? To get the sunrise?? (I've only ever bivvied to do this).

couple of reason really; I started doing early mornings a couple of winters ago when sunrise was or is much later in the day and I guess I just carried on following sunrise for my aim of catching its colors as I have had a few successes - a real magical time.

The other reason is simply because their is less traffic on the roads and I just don't cope well being stuck behind campervan/caravan convoys...

another reason sort of developed from all the times I have done it, and that is the differences experienced in the hills at night. Nothing like hearing the howling of wolves as certain places abroad but just other animal sounds which would be inaudible during the day - most trips I see something.

If you have never done it and would like to, start in an area you know first whose tracks or paths you know by heart and always try to pick clear cloudless nights or as near to as possible during a full moon if possible. Even going with others is probably better then alone. Your navigation has to be spot on, make sure you have a good head lamp (spare batteries) etc etc.

As well as using the usual mountain weather website, I also use BBC who give overnight forecasts as well. Plus I use something called The photographers Ephemeris which gives details about sun/moonrise, the direction of it etc etc, plus google earth is quite handy in showing the best places to be on a ridge or slope to see the rise the best.

probably heaps more things you should bear in mind while descending into the highlands at night but that's all I can think of at the moment. definitely don't do it during winter, or while their is extensive snow on the ground until you've done winter walks during the day. or better still, been on a course.