Changing weather in the Mammores

Changing weather in the Mammores


I almost didn't go on this walk. I was in the midst of a really stressful move back to the Kingdom and when my friend phoned me on the Saturday to ask if I fancied the Mammores the following day for some reason, unknown to me - I agreed to climb Sgurr Eilde Mor and Binnein Beag. My maps were all in a box somewhere - probably the same one my Munro book was in, and I had no internet set up so I blindly trusted the group. Had I seen a map beforehand or a weather forecast I would have said no. Too far away, too long a walk, too much ascent and too much rain. This ignorance turned out to be a blessing.

We left the carpark next to the church at 0900 and dragged ourselves up the forestry trail. Although not a difficult part of the route, it was mentally hard going. You can't see the route ahead and the bugs and beasties were out in force. When we exited the forested area the view back to Loch Leven was lovely. The only thought on seeing the jeep track further up the path is how good it would be if parking at the Mammore Lodge was still an option. 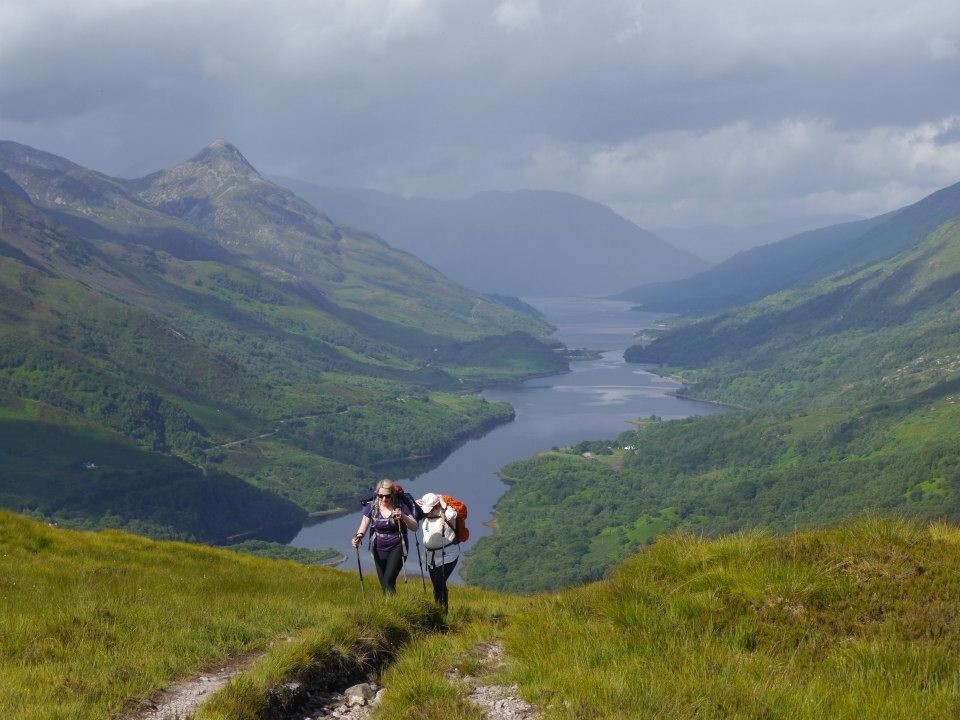 After crossing the jeep track we stopped to put our waterproofs on. The black clouds behind us were very ominous and were sure to catch us up shortly. The shower passed quickly and we soon had to stop and remove the waterproofs. This was a routine which was to be repeated many many times throughout the day. When the top of Sgurr Eilde Mor peeks into view the path changes direction. This is marked by a cairn which we initially missed. A lot of others have obviously made this error too as the erosion was quite significant here. When we reached the lochan beneath Sgurr Eilde Mor the weather looked to be against us. The cloud was beginning to flirt with the summit and black clouds could be seen moving our way from the west. The best view at this point was of Binnein Beag which had been illuminated by a very specific corridor of light. 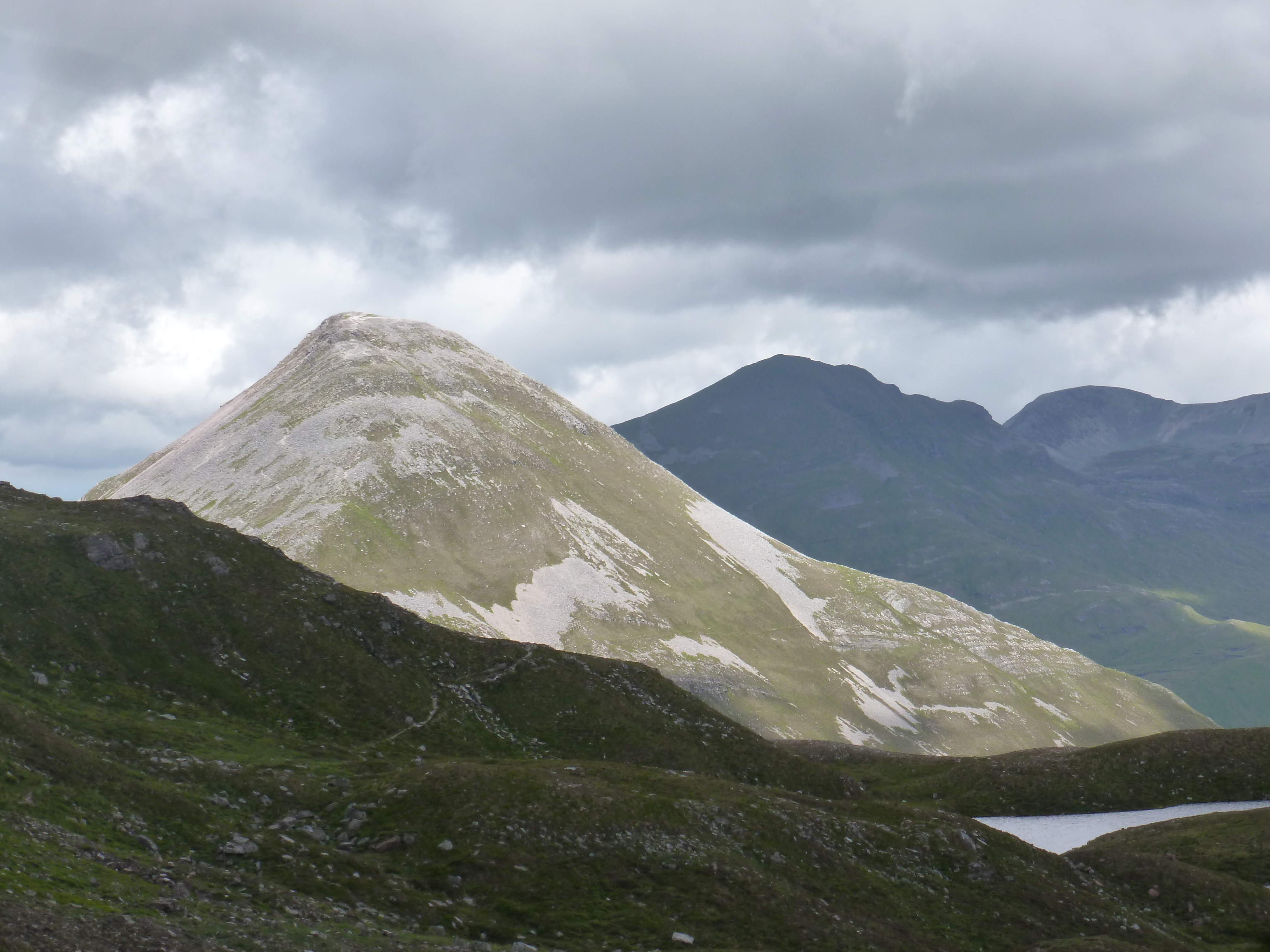 We continued up soon reaching the badly eroded scree slope which is the most popular ascent of Sgurr Eilde Mor. It was hard going! The loose material made the ascent very slow but once on the ridge it's a pleasant hop to the summit cairn. This was when the weather deteriorated. The waterproofs went back on and we sat on the summit in the pouring rain debating whether Binnein Beag was really such a good idea then as quickly as the storm had started - it disappeared and the sun came out. 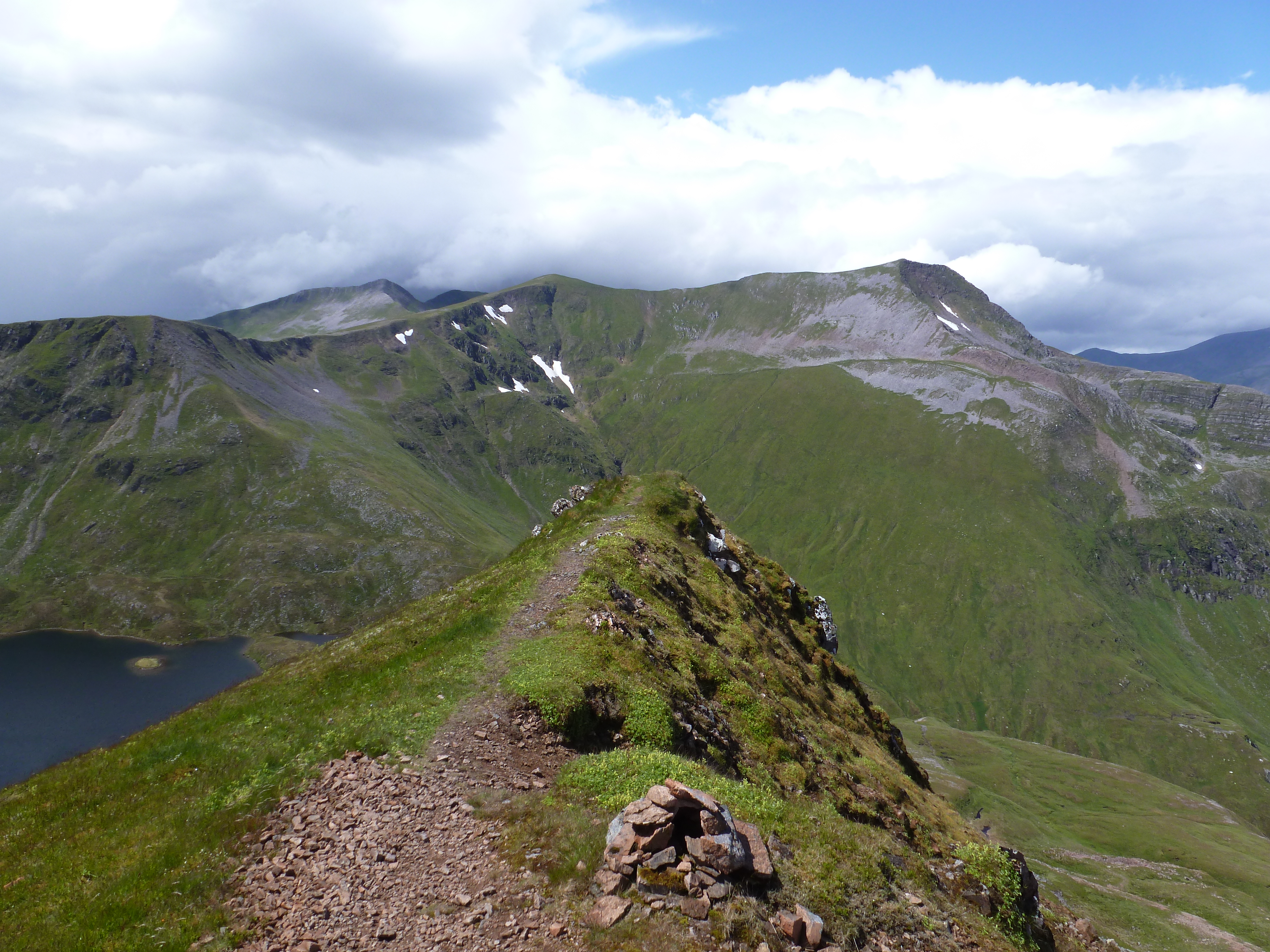 If the eroded scree made for an unpleasant ascent goodness knows what you'd call the decent. I gingerly edged down the eroded material being as careful as possible. When I put my foot down, it slid another foot further then just as the better path was in front of me I lifted my head to shout to one of our party in an ironic tone "Hey! That was easy!" and in the style of a comedy sketch I was on my a*** before the sentence was finished.

The loose material cushioned my landing!

Now that the sun was out everyone was feeling better about Binnein Beag. We plodded along the path adding and removing waterproofs until we reached the bottom of BB where we stopped for something to eat. At one point the sky had gone completely black so we put our waterproofs on only to remove them dry 5mins later. The big black clouds seemed to skirt perfectly by us. The position of the path sheltered by Binnein Mor probably helped. We must have spent around 40mins playing with waterproofs throughout the day! Binnein Beag is just as badly eroded as SEM. Once at the top we sat through another heavy downpour before descending. The views of the Aonachs are particularly great here and the pink snow on Binnein Mor was a great view too! Although the amount of eroded material is equal to SEM the solid rocks between were much more numerous making the descent a lot quicker. That was probably the reason for my second YES SECOND fall! I'm usually a very sure footed person but there is nothing you can do when the hill moves beneath your feet. I put some weight on my poles to try and soften the fall but my leg/backside collided with a very sharp rock. The pain was excruciating in the way it is when you stub your toe for a few seconds but thankfully my poles had saved me from the worst of it. The same could not be said for my brand new Gore-tex waterproof trousers which now sport a rather fetching gaffer tape patch on the backside. GUTTED!

The sun really came out on the way back and it was short sleeves almost the whole way. On reaching the lochan the view of Sgurr Eilde Mor is incredible - 10/10. 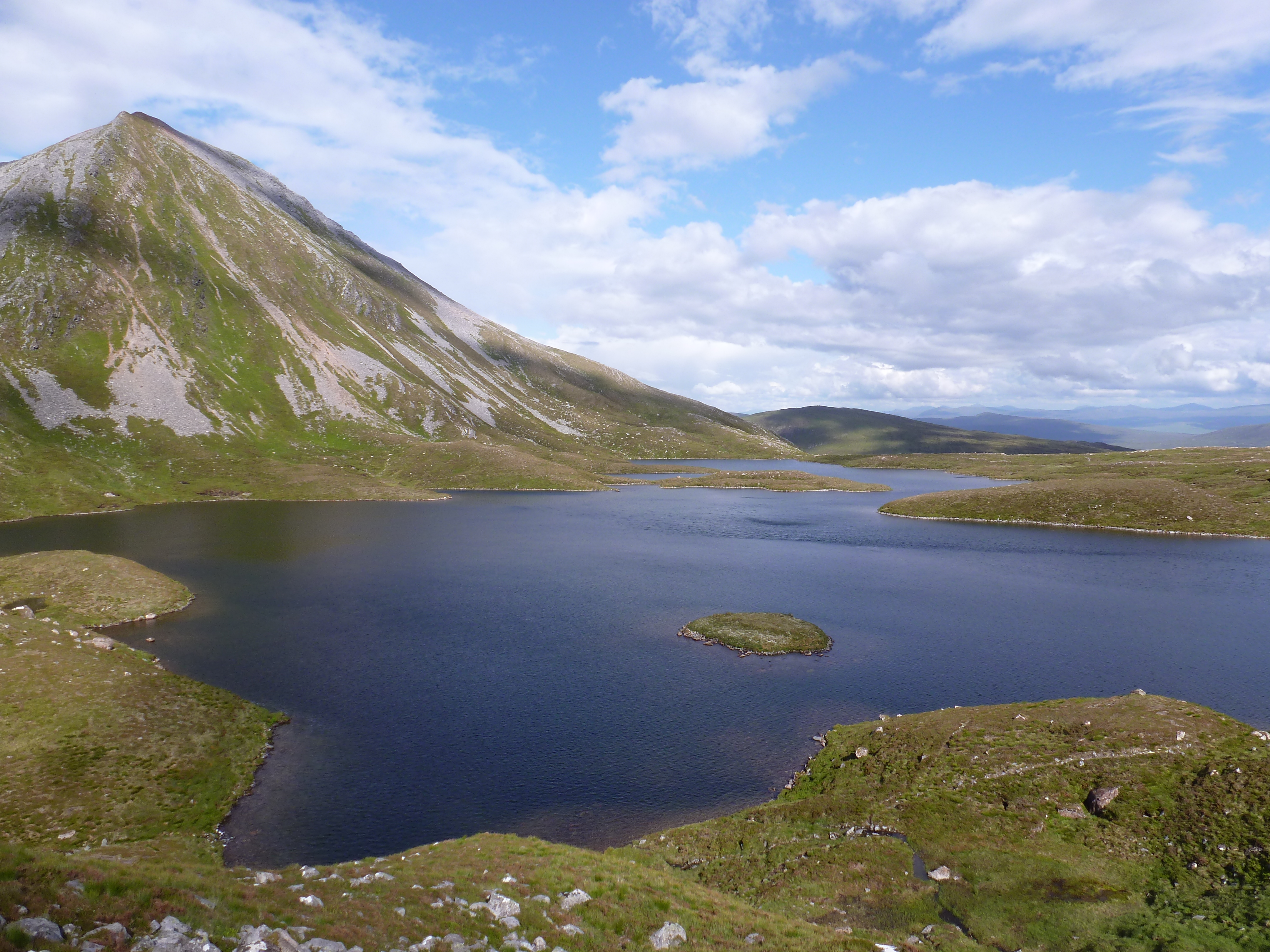 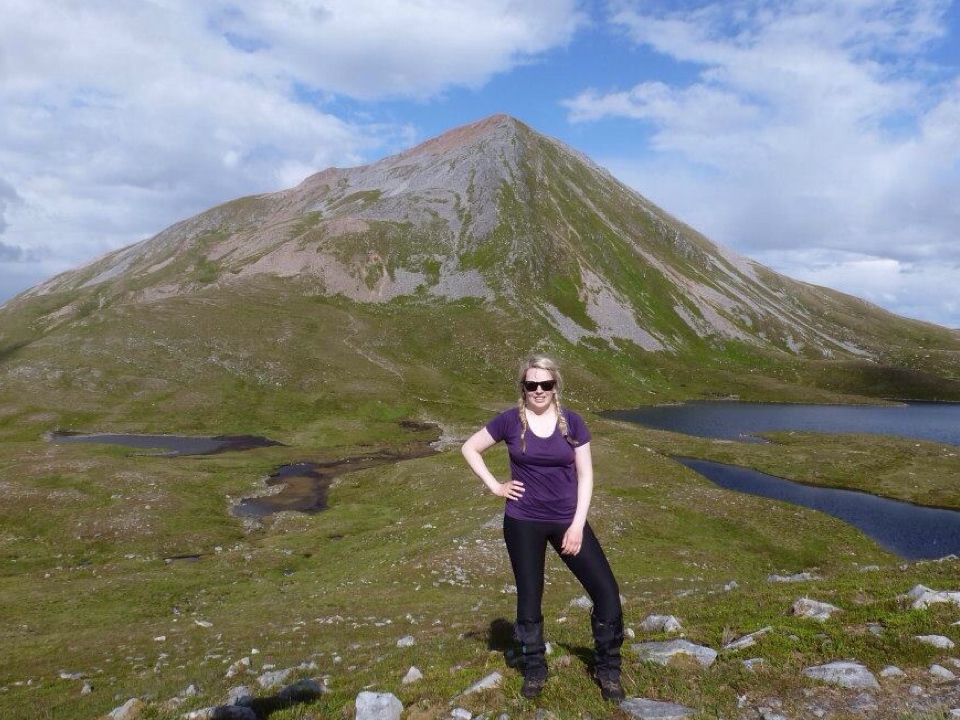 When we reached the far side of the lochan we saw this patch of snow peaking out. 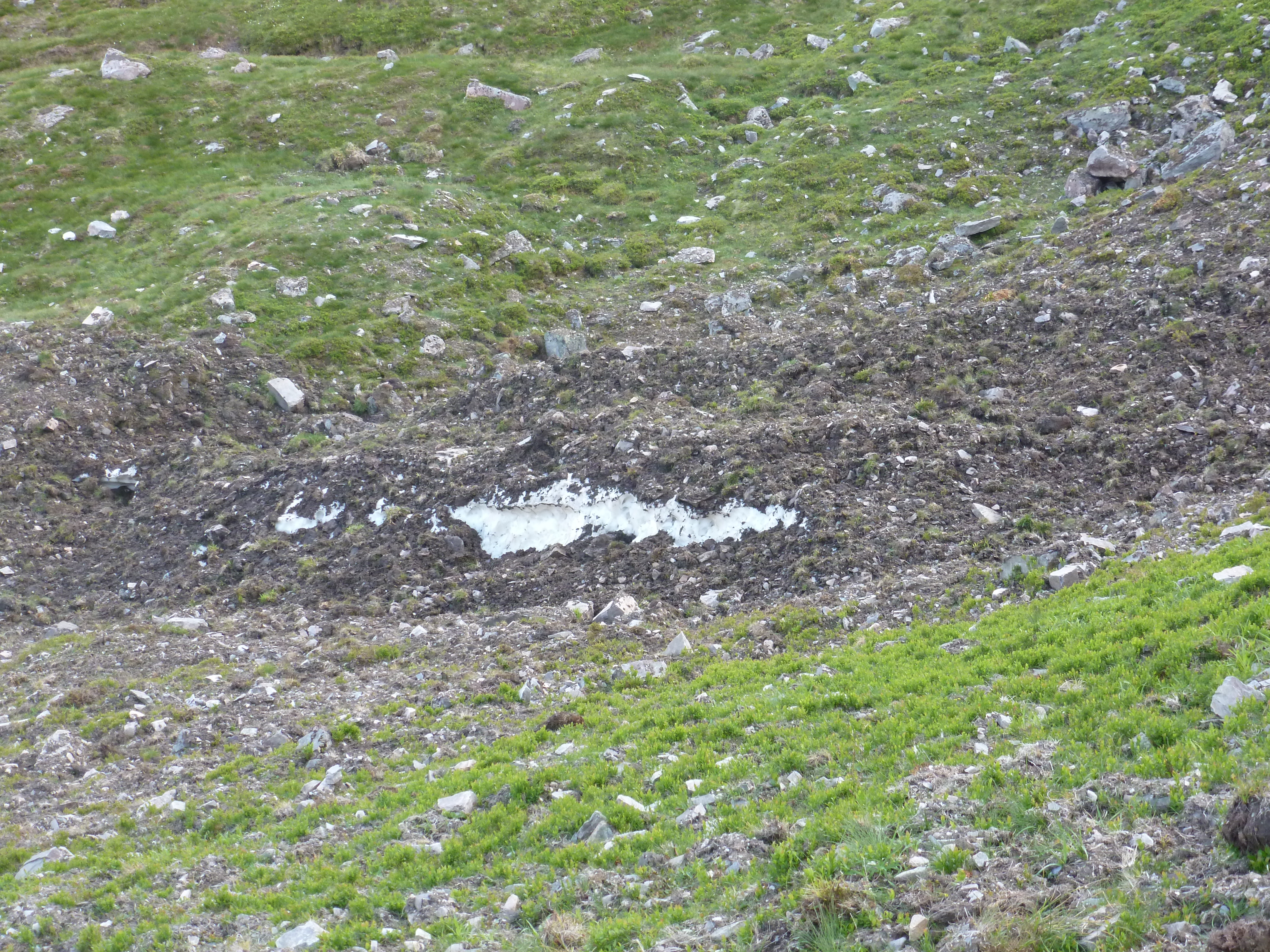 There was no other snow at this altitude and the soil on top of the snow patch had gotten there by way of a landslide. The scar could be seen on the hill above. The thick layer of material will have insulated this snow patch and sheltered it from the sun. It would be interesting to see how long it survives.

The descent in the sunshine was quite pleasant. It's amazing how much the weather can influence your opinion of a hill. Although I won't be rushing back to climb Binnein Beag - Sgurr Eilde Mor is a fantastic hill which I will definitely do again someday!

One piece of advice before I sign off - DO NOT GET SMIDGE IN YOUR EYES!

The Mamores is still my favourite area and I will never tire of visiting it. I've had the same "really not in the mood" attitude a few times but it's amazing how quick it lifts

Fudgie wrote:The Mamores is still my favourite area and I will never tire of visiting it. I've had the same "really not in the mood" attitude a few times but it's amazing how quick it lifts

As an east coaster who is only just starting to travel westwards I had never been in the Mammores before. I really enjoyed it - just big hills everywhere!. Maybe have to squeeze theRiing of Steall in before the schools go back!

Glad you got some good weather mixed in - super photos of these beautiful hills.

Nice one Cat, you must be getting the hang of this report writing, or is this you trying to get into practice for what is to come over the next 30+ years

Loved the photo of the loch, looked almost star shaped

Thank-you Annie. I am a really bad photographer but sometimes the hills make if impossible to take a bad photo.

Afraid not Martin! It took me ages to get this written then the page timed out and I had to do it all over

There will be plenty of report writing for me in the coming years but only the occasional one for WH! Ha ha. See what you mean about the loch. It's a very special place

Well done - they look a long way out from the car park in Kinlochleven, those two, and the scree slopes seem to be notorious

. I still have the pleasure of tackling them to look forward to, myself

- that's an amazing shot you got of it standing in the "spotlight", though!

bobble_hat_kenny wrote:Well done - they look a long way out from the car park in Kinlochleven, those two, and the scree slopes seem to be notorious

Which is exactly why had I been online and able to read about it at the time I wouldn't have agreed to go whilst in the midst of a move!

Very Glad I did go!

As for Binnein Beag it was an enjoyable enough walk but not one I'll be rushing back to do. It's just a wee bit too far out and there are other hills I would revisit first!