I've been building up towards walking some of the central Cairngorms for some while. After some practice with long walk-ins and finding my pace, I felt ready to try a route. I walked the Lochnagar group on the Wednesday, then camped west of Braemar. The forecast looked hopeful, as did the last views from near to my tent. 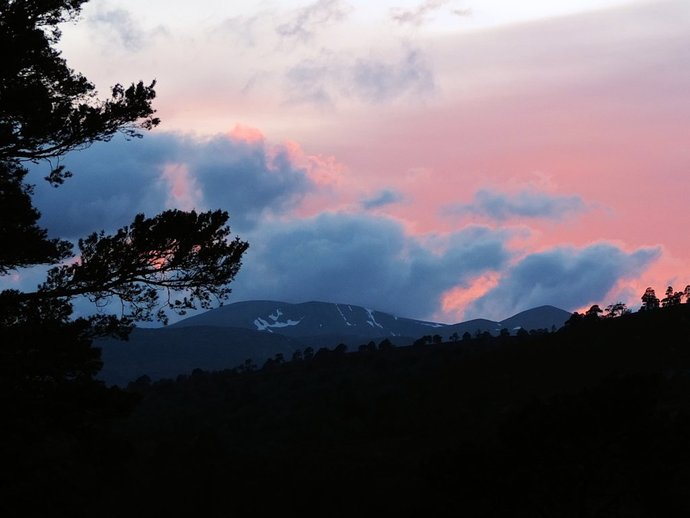 The next morning was overcast, but dry and felt like comfortable walking weather. I did dally, checking on the mountain forecast and picking up on some lunch in Braemar, but was back up to the Linn of Dee and ready to set off at about 9:15. One day I'll just get out onto the hills and make the most of an early start.
There was a fair number of cars parked up, though it appeared that bikes were the order of the day. I was overtaken by a few cyclists on the track up Glen Lui (and also passed much later on, returning the same way). But the walking is good, passing through pine woods and then accompanying the Lui Water, with views of the hills gradually opening out ahead and to each side.
About an hour brought me to Derry Lodge, with information boards and signs indicating the passes and rights of way heading west, northwest and north. I also spotted, though didn't head over to look at, Bob Scott's bothy across the water. 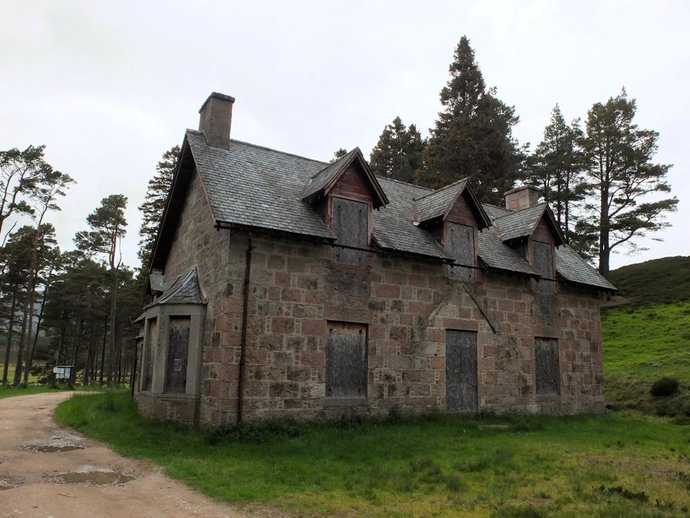 I crossed the Derry burn by bridge, then immediately turned left (west) for Glen Luibeg. The next quarter-mile is pretty boggy, with watery stretches to jump across (or fall into, if that's your thing). I didn't need a cooling dip quite yet, so tried to stay dry until I found the path again (or it reappeared) rising gently towards some a wooded stretch.
Another mile along the glen brought Carn a'Mhaim into sight, with the burn keeping me company down to the left. The weather had been pretty dry so, considering the time of year, I decided to aim for the crossing along the path, rather than turning right towards a bridge (which is also the more direct route for MacDui). I passed a few more folk along this stretch, though most that I spotted seemed to continue up Glen Luibeg.
The crossing was simple enough, with plenty of large stones to step between. I paused for a break; the weather was mild, if not quite warm, and I felt that I had earned some elvensies. This looked as good a spot as I could ask for to enjoy them and a few moments' ease. 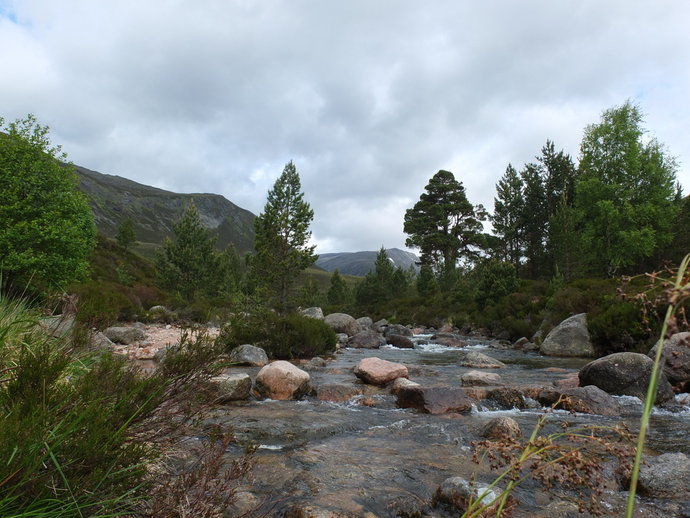 The path continues, climbing gently, joining another (coming from the bridge) before the uphill route splits off. The gradient builds gradually, though I could tell that there was plenty of ascent to be done. 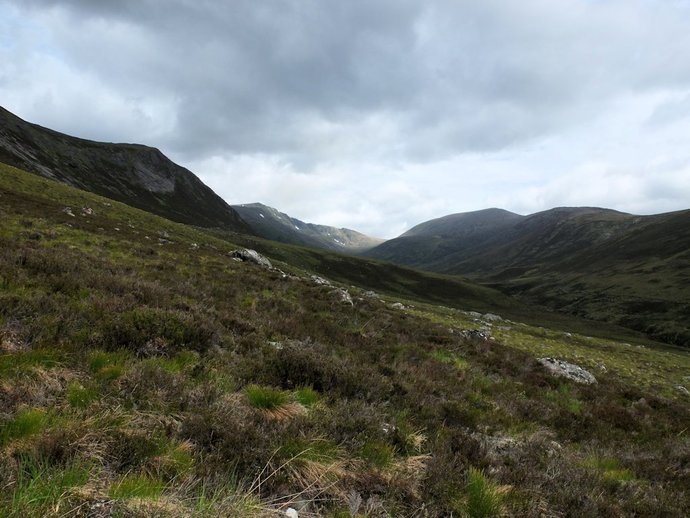 A well-made path climbs the south-eastern shoulder of Carn a'Mhaim, zig-zagging up through the heather. I spotted a few speck-sized walkers, including several heading west (towards the Lairig Ghru), though the hill appeared less popular than its bigger neighbours. Gaps appeared between the clouds, which remained far enough up not to be worrying. 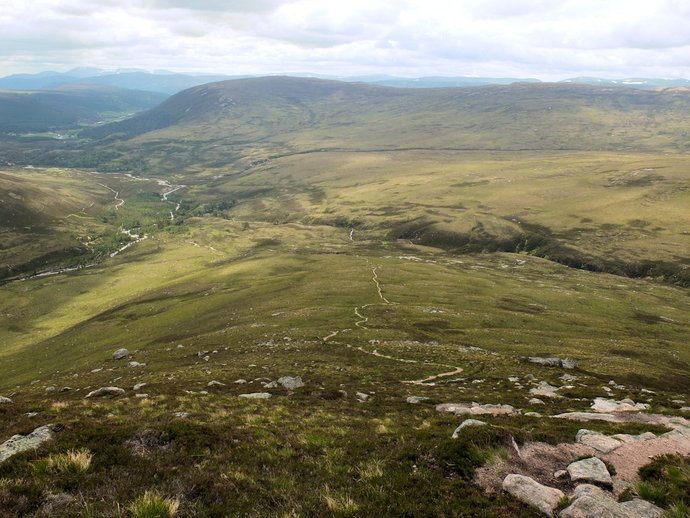 The approach to Cairn a'Mhaim

Reaching the shoulder of the hill, I started to encounter Ptarmigan. Some were on their own, but many had chicks, at first in ones and twos (or the rest were out of sight). I attempted to avoid disturbing them more than necessary to get by, especially when the mothers did their "follow me, I'm an easy lunch" trick. That wasn't helped by their excellent camouflage, which sometimes meant I only spotted them once they'd already started trying to distract the threat to their broods. 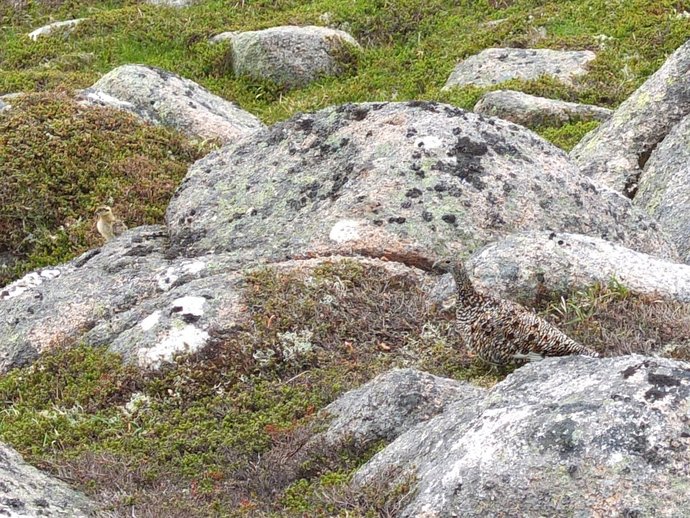 Once the path curved right, I visited the southern cairn first, then the Munro itself. The first is a good viewpoint for the way I'd come, but my attention was drawn onwards. There was the long bouldery ascent to Ben MacDui to consider to my north; was that too far after taking nearly three hours already? 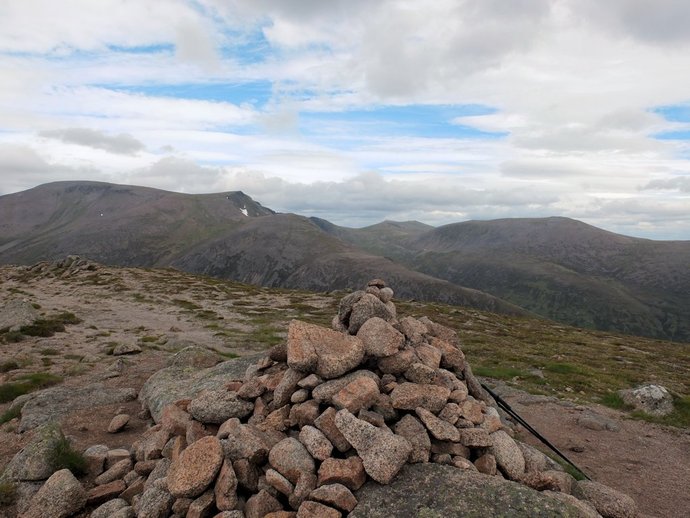 And, to my left, the drama of the Lairig Ghru and the hills west of the Dee. The distances seemed to be on a different scale than I had walked elsewhere (and no, that's not just because I was using a 1:40K map today!) 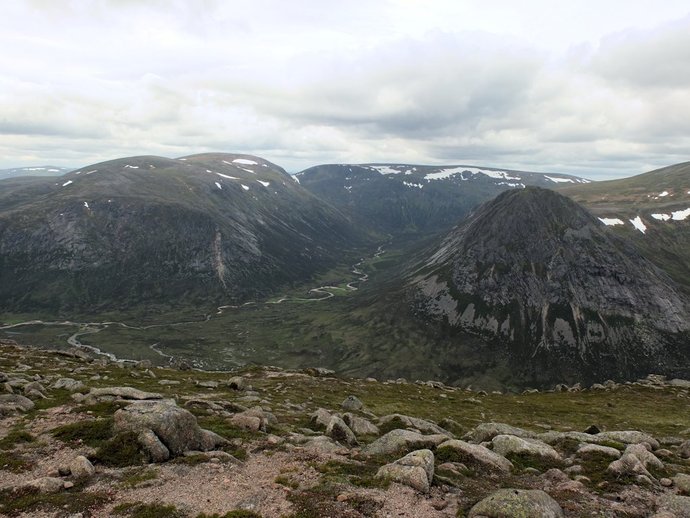 Beinn Bhrotain and the Devil's Point

After more refuelling, I followed the hill northwards. The ridge narrows interestingly, never becoming a scramble but with rock (as opposed to stones or boulders) underfoot and more air to either side. I needed to take care with my footing, or pause to take in some of the vistas on each side. 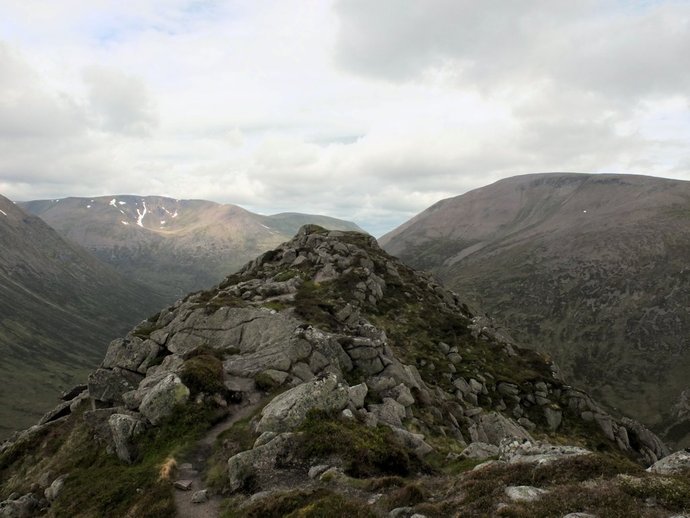 The ridge spreads out and eases off again, turning into a wide bealach a good quarter of a mile long. There were some peaty pools and boggy miniature lochans, but I opted to wait rather than refill my (main) water bottle at that point. Though this easy stretch wouldn't last forever and the boulder field ahead was looking steeper with each step. 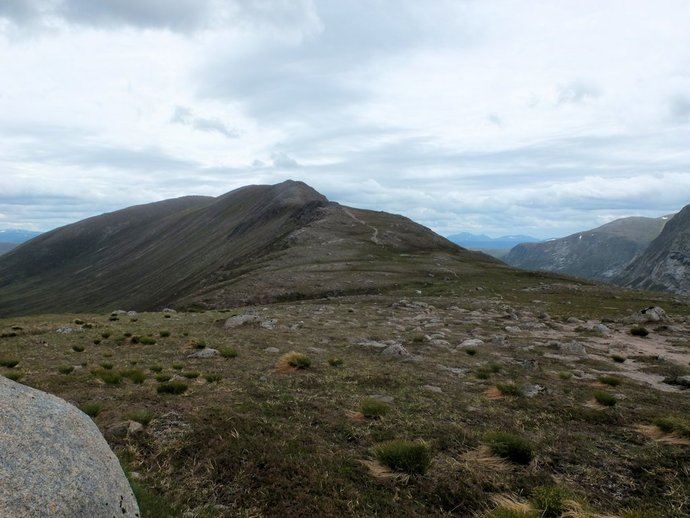 View back from the bealach

There's a path to start with, though I parted company with it after about five minutes. I did find a burn to top up with water, but most of the time was boulder to boulder, rock to rock. Nearly all of them proved securely-balanced, but it still called for a lot of concentration and effort. Photo times suggest that I was only climbing for about 35 minutes, but it felt a lot longer.
Once the ground - and the boulders covering it - began to ease, I changed my course from northwest to northwards. There was a last chance to look across the Lairig Ghru before the broad plateau filled in most of the view. 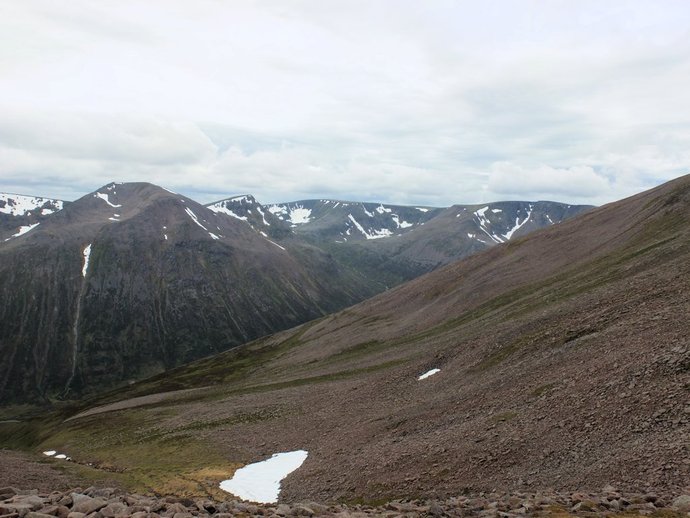 The gentle gradient and altitude combined to cool me down. The ground here is gritty soil (mostly crushed granite, it appeared), with scatterings of stone and sparse mossy grass - much easier going than the ascent had been. I soon resorted to my jacket and took advantage of some cover from the breeze. 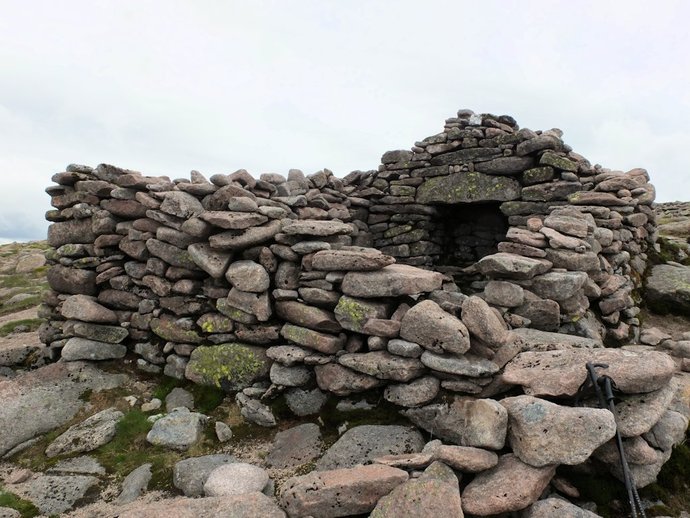 But checking the map showed the cairn and viewpoint were just a few minutes' further. These were slightly busier - not packed, but with folk arriving, leaving, or hanging around like me to take refreshment and snaps. There are some low wind-shelters, a trig point, a viewpoint - almost everything you could ask for except a cafe and the Big Grey Man serving cakes. 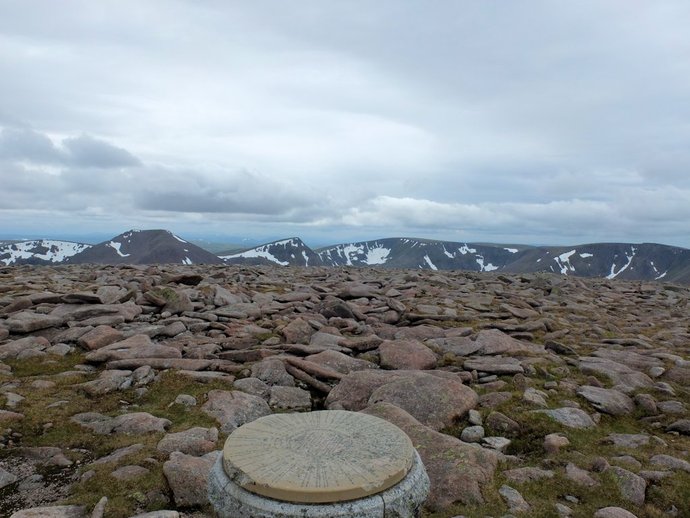 After some flapjack (luckily I'd brought my own), I picked up the path east, keeping to that rather than aiming for Sron Riach (which would have been the easiest direct descent). Five hours this far meant I ought to be able to fit in another hill, I reasoned. It turns out that meant I missed a Munro Top, but that's a good excuse to be back again.
The path becomes slightly steeper at about 1200 metres, aiming across a gentle north-easterly corrie. Except a lot of that was covered by some lingering snow-fields, a faint surprise given that the plateau top had been clear. I picked a route to minimise my time on the snow/ice and some enthusiastic stamping down got me over without a slip.
I took in the view over to the final hill of the day, dramatised by the plunging crags before me. 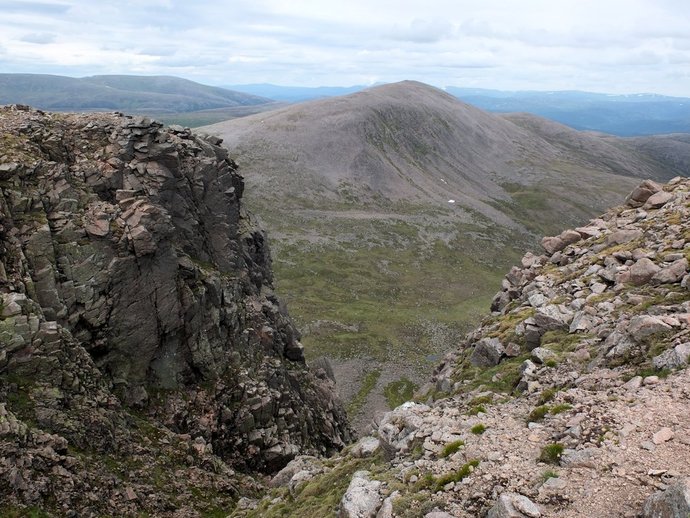 Then it was back to the path, or at least trying to follow it. The path was plain and well enough made, but I needed to divert several times to avoid more broods of ptarmigans. Some had six or seven chicks that I could count, which seemed amazing with snow-fields and the sparse life clinging to the gritty ground. I veered eastwards, above the path again, to avoid another broad bank of packed hard snow, yielding the slightest trickle to join the Loch below. 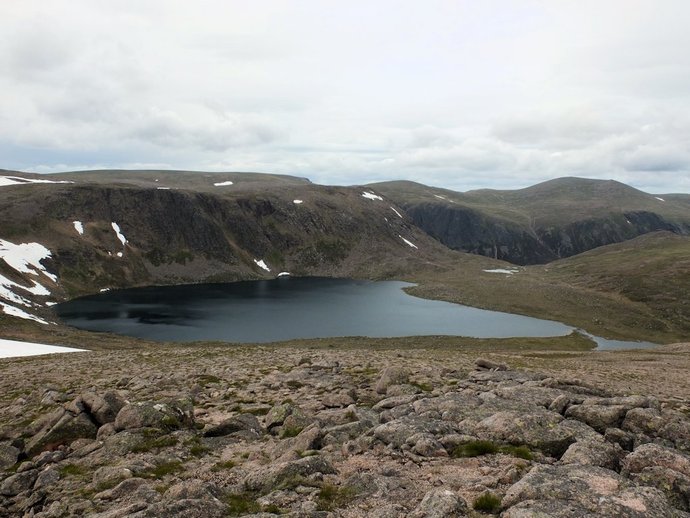 I met one walker on this stretch, heading in the opposite direction to me, for Ben MacDui then down to Carn a'Mhaim. He wore approach shoes, quite a contrast to my hefty Alt-bergs, but seemed confident in them - and more used to negotiating boulder fields than me.
I headed east, rather than turning south yet, to visit Ceaggan a'Choire Etchachan. This Munro Top is relatively pointed, adding depth to the views in several directions. Beinn Mheadhoin looked close at hand, but my pace and starting time meant that it would have taken too long - and, needed more energy - for today. 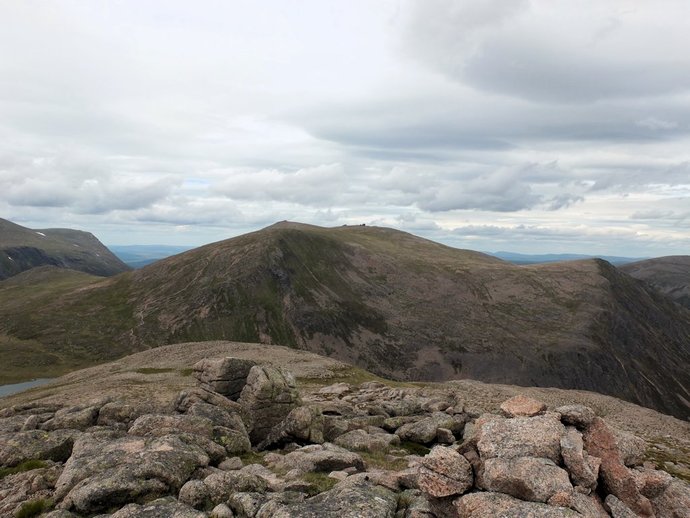 As a consolation, I did tag on Sgurr an Lochan Uaine, though not the Angel's Peak one (the spelling's different). My option is a Munro Top joined to Derry Cairngorm by a very broad ridge, but much more dramatic from most other directions. I picked across a slightly-boggy corrie, skirted another snow bank, for a short ascent to the top. 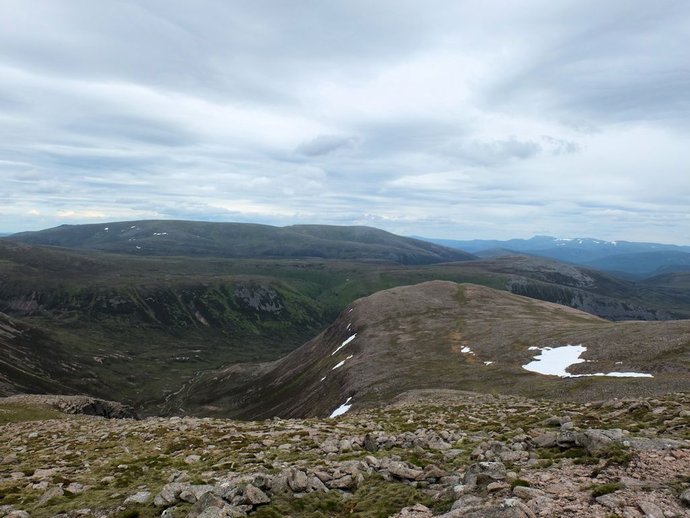 This added maybe 30 minutes to the walk, most of it when approaching Derry Cairngorm. This is covered by another boulder field, which felt harder work by now. The clouds dropped a few hints of a shower, discouraging me from hanging around for long even though it didn't turn to anything at that stage. 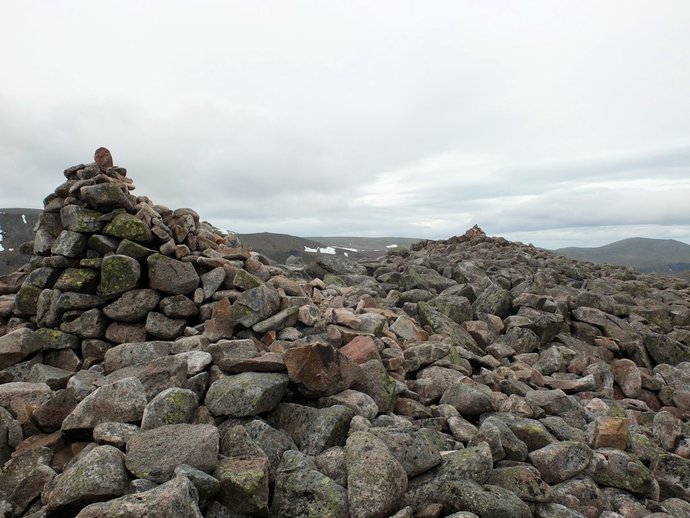 I followed a path for most of the way south along Derry Cairngorm, visiting Little Cairngorm before the hill broadens further. The boulders eased off a little way down, save for brief descends of slightly-steeper slopes. But my legs were feeling the distance and I was ekeing out my reserves of snacks to keep my energy levels going.
A slight climb towards Carn Crom, then picking around its steep east face, were a last challenge. Then it was downhill on an easier path following the southeast ridge. This gradually brought me down to the pine woods above Derry Lodge, with a lush carpet of green heather over the ground.
By now I'd realised a downside to the "long walk in", which is the even-longer-feeling walk out. But the track is easy going, most of it slightly downhill, and the slight showers had held of getting worse. I marched on, promising myself to make up every calorie burned with dinner in Braemar, and didn't waylay anyone for their bike*. 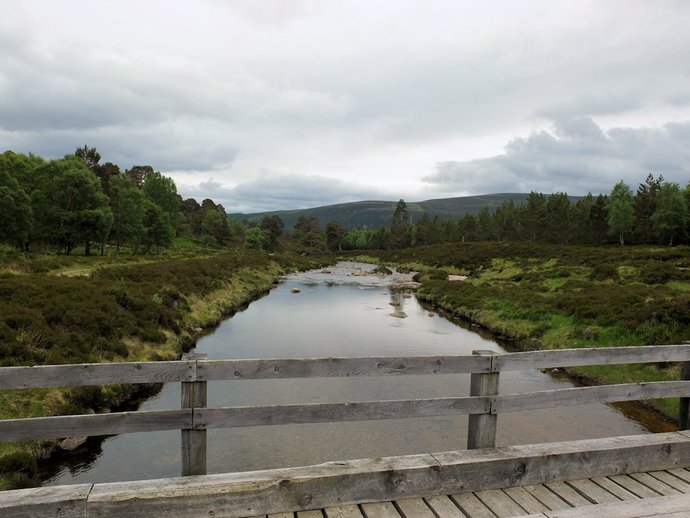 I retraced my steps across the bridge over Lui Water, then the track and footpath back to Linn of Dee. Boots off, a drink and snack, then I headed to Braemar for shelter and that meal. Now that I've caught the Cairngorms bug, I will be back - though next time with an earlier start and more flapjacks, if I have any sense.


*This may have been because they gave me a wide berth, rather than from any restraint on my part.