Stuchd an Lochain and Meall Buidhe

Stuchd an Lochain and Meall Buidhe


Was looking for some of Loch Lomond hills, but weather dictated trip further inland, so Stuchd an Lochain seemed worth a look, as it might be possible to kill two birds with the one stone, fitness and weather permitting? Forecast was a bit mixed, but hopefully I'd manage one of the pair out there. As usual my hiking buddy, Big Jesper, was away on holidays to tropical climes - again!
It's quite a wee bit on from Killin, but that gave me time to decide which to go for first, Stuchd an Lochain, or Meall Buidhe? Can't remember how road up to dam is signposted, but it wasn't too clear, however found I had taken right turn off. Could see Meall Buidhe shrouded in cloud, so decision made. Would decide about MB later.
Soon got round side of dam and onto hill, which quickly becomes steep, stony and muddy. Quite a steep initial slog, not enhanced by start of rainy spells. 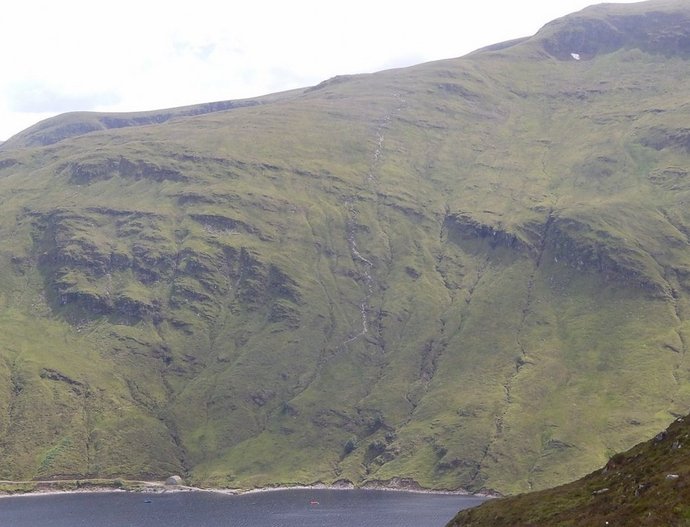 Steep, stony, some scree and muck track up Stuchd an Lochain!

I was quite happy to reach more pleasant ground on the ridge of Creag an Fheadain, where a line of fenceposts heads up the slope. Bit of a view of the loch, but, reaching the top here, I was disappointed to see the summit, also shrouded in cloud, descending to the level of the ridge across from Sron a'Chona Choirein, as the wind and rain became a bit more unpleasant. No sign of Lochan nan Cat. Stuchd an Lochain in the cloud. Ach well, fenceposts to aid navigation, path is quite clear, not far to go and might well clear up. No point turning back yet, so onwards it was. Wasn't too long till climbing on to the summit. Could just about make out the outline of a rounded lochan below, but otherwise, no views and just getting wet, so it was a quick turnaround, back the same way. As luck would have it, the rain stoppped and things did clear by the time I was back at the bealach, so managed a few photo's and could see things improving on Meall Buidhe. East, back into Glen Lyon. Have to admit, I didn't enjoy steep descent back down to Loch an Daimh, much, with its mix of scree and muck, but always nice to see some views of dams from above. Back to the car in 2 hours 40. More like t-shirt weather now, so after a bit of refreshment, was only too keen to do Meall Buidhe and avoid a return trip some other day.
Aside from peat bogs, the going is more gentle up here, though I'd imagine it would be much worse after a wet spell. I spotted the cairn marking the departure off the road onto the hill and followed a variable path, just to the west of north, up near Meall a'Phuill, where I saw the only other walker that day. On reaching the top here, I was surprised how long a walk round the wide ridge it is to the summit, but doesn't take long. Only just over 1.1 hrs to the top. 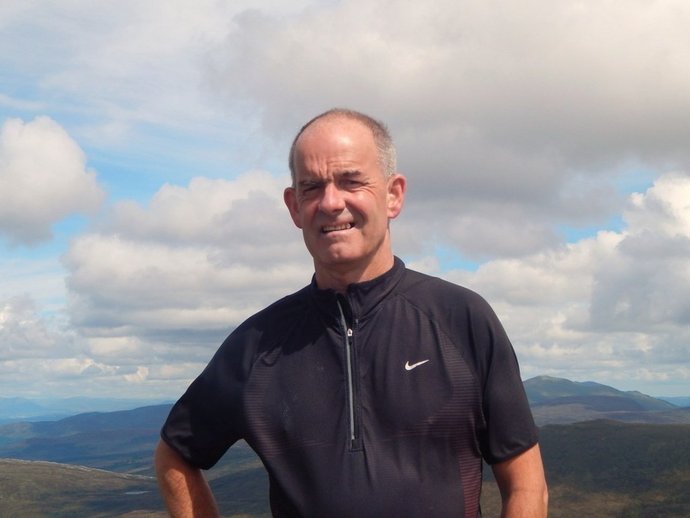 Had a chat with the other guy, who was on his way back and heading to do the Corbett, Cam Chreag. I woundered about how boggy it might be in between hills, but wished him well. On the way back, views of Stuchd an Lochain, Lawers and Glencoe hills was much clearer, so time for a few more photo's. Ben Lui and Stob Binnein, behind S an L. Began to wonder if I could do the round trip in under 2 hours, so have to confess to a bit of a jog here and there as I came down from Meall a'Phuill. Nothing too strenuous as was wary of recent knee probs, however managed to have the odd trip, or two. Anyway, made it back to car in 1 hour and 56, so that is a short Munro for anyone. All in all, about the five hours. Dam from north side.