Yes I thought that would get your attention

Left Edinburgh around 8:30am and it was already hot!
Nice drive up. The A9 now has average speed cameras, but they aren't interfering with the fabulous views along the way and over Drumochter.

Got to the main car park at Cairngorm the back of eleven and it is 24° C. It is definitely going to be a sun cream day. 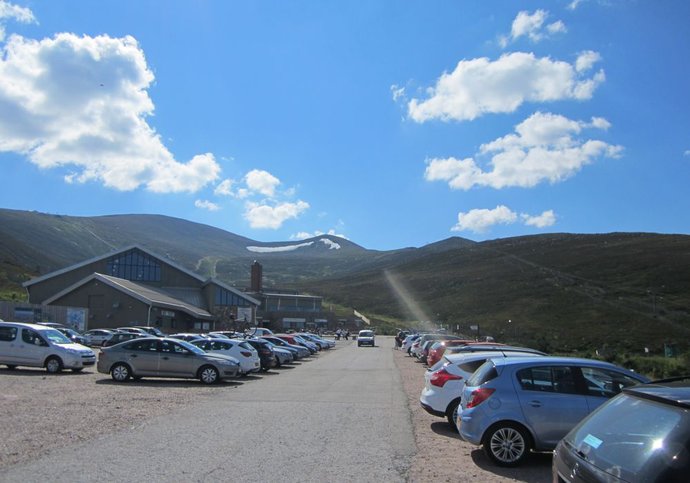 Started off up home road and crossed over to burn side, up to the zig zags and then took the path, or should I say stair case up Fiacaill ridge. Last time I was up here it was covered in a thick blanket of snow.
Three youngsters were hot on my heals and I stopped at the snow fence and chatted to them and let them by. From Belguim they were the adventurous three, the rest of the group had opted for sedate walks on the valley floor; what a waste of a calm sunny day, their loss.
Anyway on up the Fiacaill staircase, the youngsters up ahead. 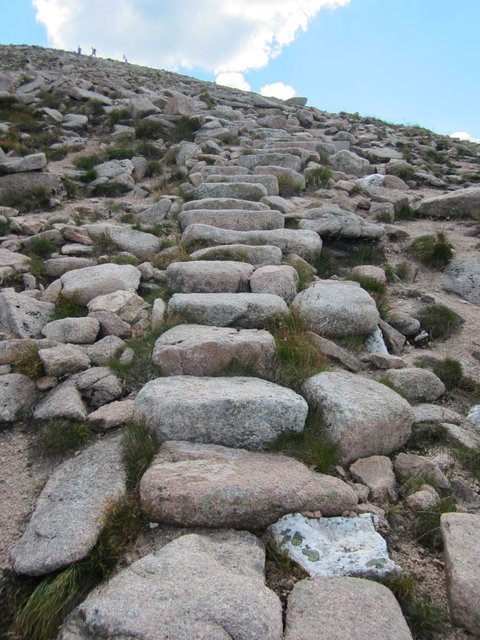 I've done a fair amount of ski touring up on the plateau including one tour round by Ben McDhui and down to Loch Etchachan, and one of my main reasons for doing this walk was to check out what it all looked like without any snow on it.
To my amasement it is a real spagetti junction of paths from here to everywhere. The cliffs of Coire an t‑Sneachda looked very dramatic without their winter plumage. They look pretty dramatic whatever they're wearing! 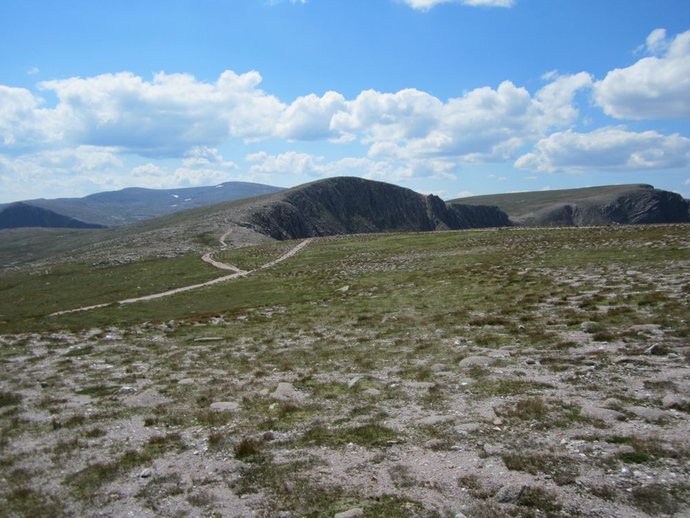 Found the faint path that leads down Coire Raibert which soon turns into a well trodden well maintained path to a steep and deep gorge. 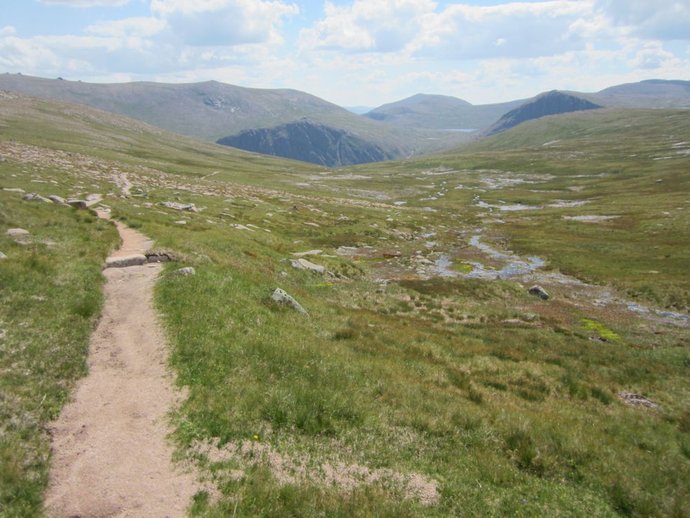 Another reason for taking this route was to see how easy it would be to ski down here; it looked pretty steep on google earth and the OS maps weren't giving me any conclusive information either. Turns out it would be fine, I suspect the gulley would be filled in with deep snow, but if not, skiing down either side would be relatively easy.

Chased a couple of Ptarmigan down the path before it dropped down into the steep gorge and a first view of Loch Avon and it really is that green. 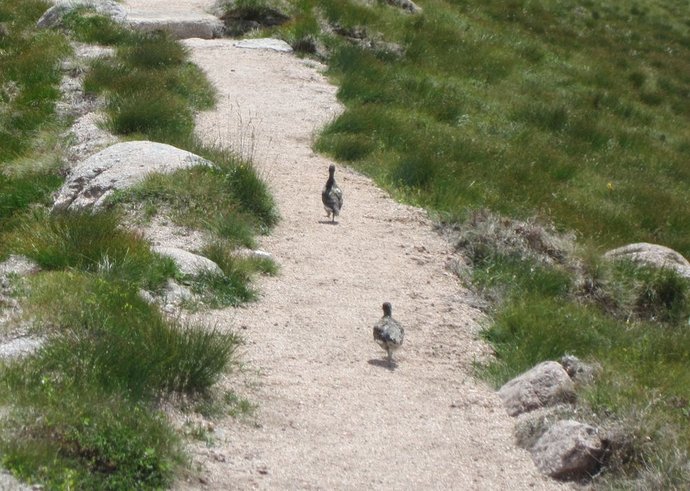 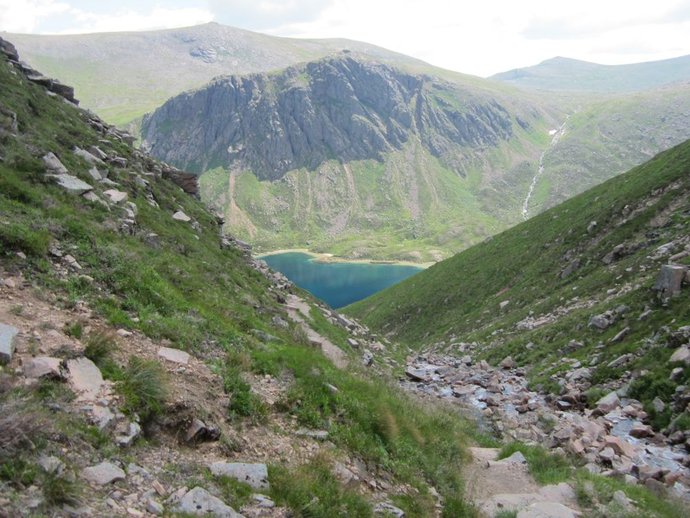 I missed the crossing of the stream and went straight down to the Loch and it is beautiful as were the colours in this Heath Spotted Orchid. 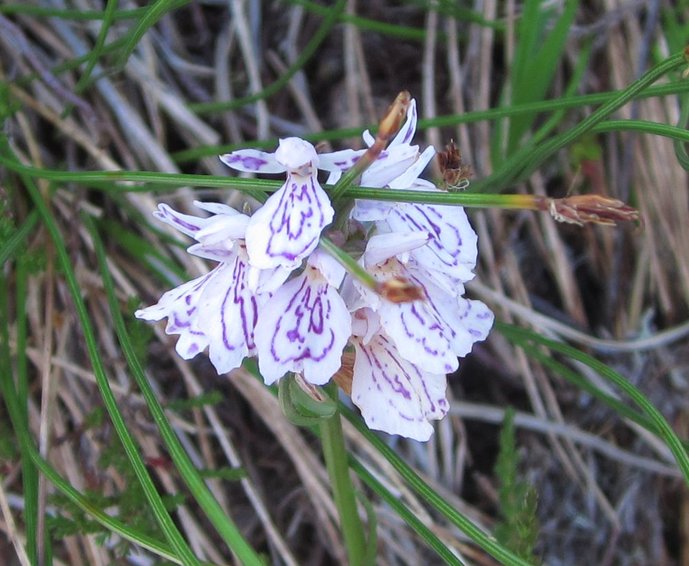 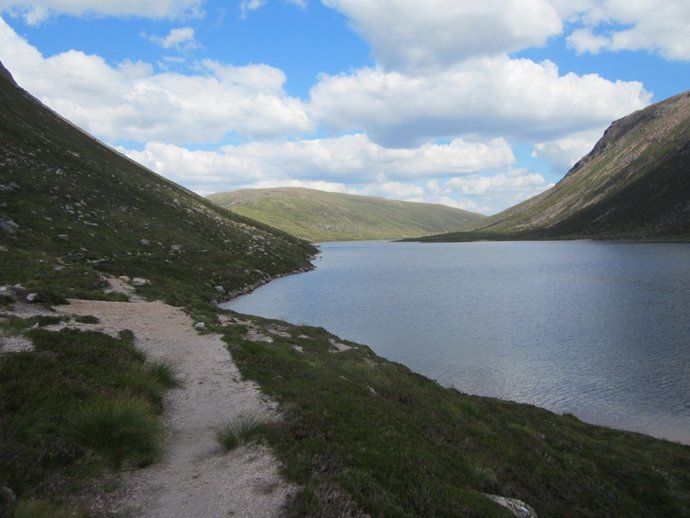 Although I'd seen Hells crag and the other cliffs at the top of Loch Avon from above during the winter, this view in the mist with an avalanche particularly memorable; wouldn't have been skinny dipping that day for sure! 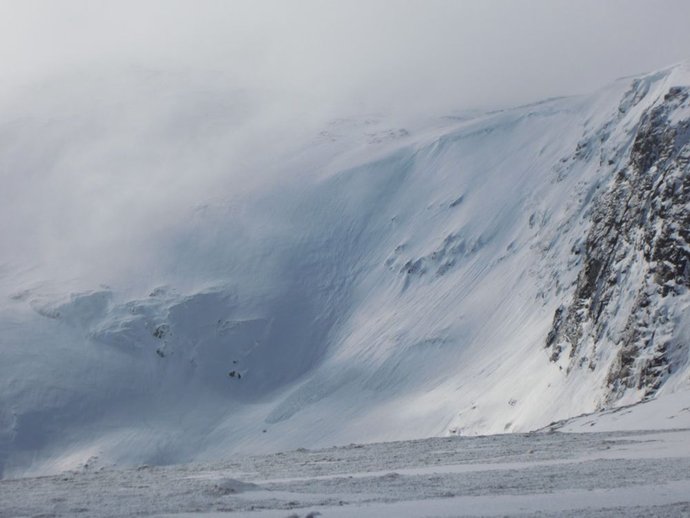 Now in this very hot summer day and close up from below they are awesome with the massive chuck of rock at Hells crag particularly impressive, although the entire vista is as I say awesome. 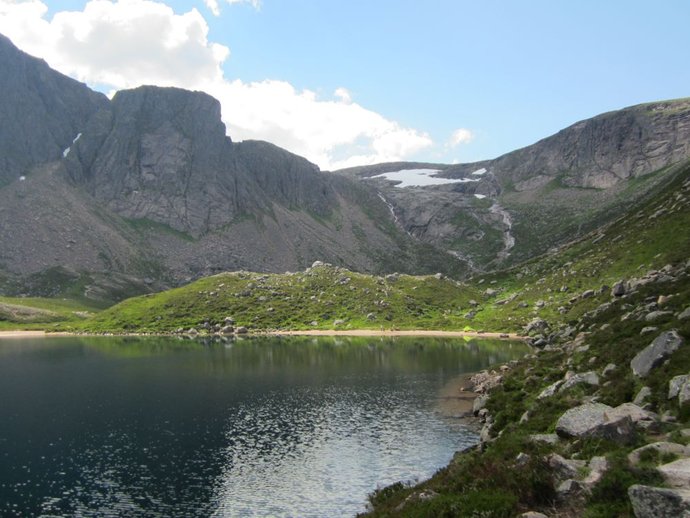 I stopped and chatted with a group of three from Forres who had possibly the best camp site in the world with possibly one of the best swimming pools in the world a few metres away.
Stopped and chatted with them for a while and they said they had all been in swimming and it was nice and encouraged me to give it a go. On the way along the Loch the water had looked so clear and cool in the sweltering heat that my mind had started to have thoughts of a swim.
Further along and across the ring of stones 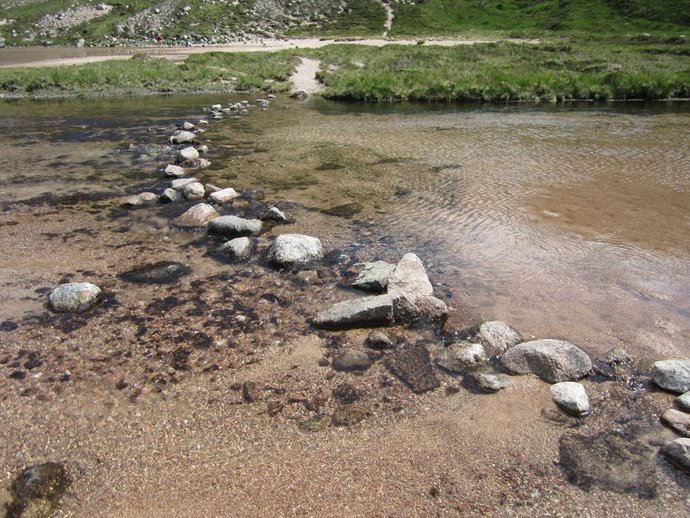 and met a Dutch girl on holiday with her friends who were camping a little way up into the head of the Loch. She too said they'd been in swimming and it was lovely, mmm 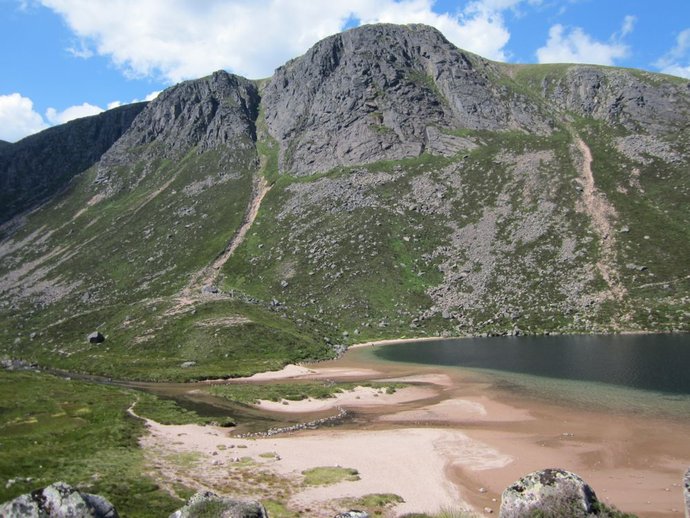 the scenic and interesting mountain scape with its imposing cliffs and fabulous beaches. No issues with grabbing a spot to lay your towel down on these soft sands!

The path up to Loch Etchachan was pretty easy going with a couple of steep bits. I could imagine that during the Spring and Autumn the top would be very squidgy, but I'd always planned to do this walk in the dry. Missed out last summer, but timed it right now.

Photos of the giant slabs of rock at the head of the Loch never do justice to the actuality, but here's another attempt at conveying their majesty. 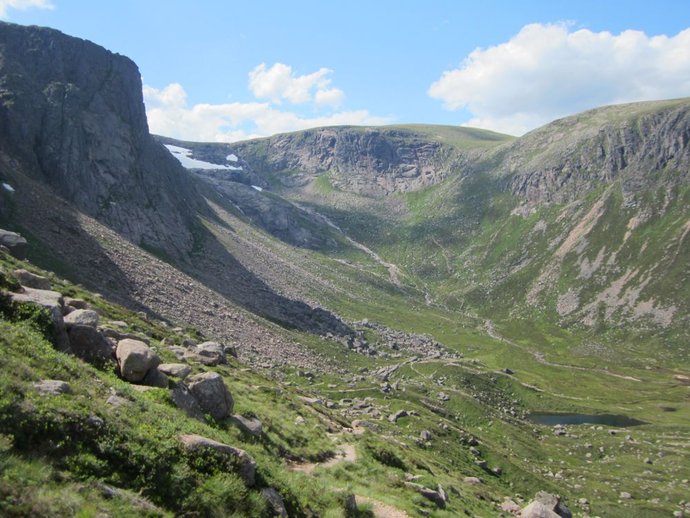 I walked along the path to Little Loch Etchachan. On the day I had ski toured down here the snow was frozen and although it was a fabulous sunny cloudless day the skiing conditions could have been better.
A very frozen Loch Etchachan. 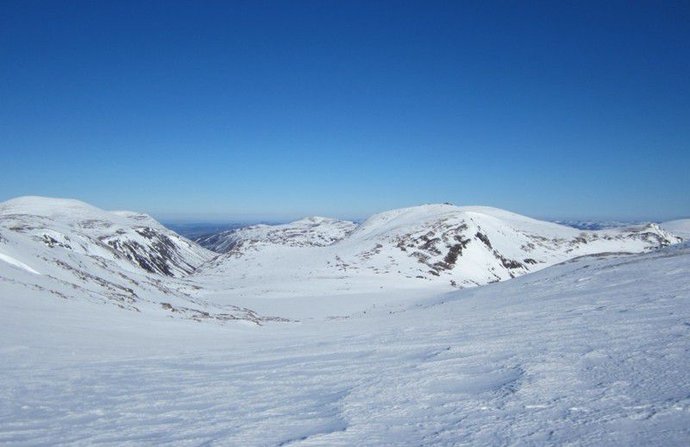 Backtracked to where the Walking Highlands route said the path ascended to Beinn Mheadhoin and there isn't a path, although the route up is pretty easy especially with the ground all dried out.

Nice view down Strath Nethy and another of my objectives was to drop off the end of Beinn Mheadhoin to the east and back up and over the saddle and on to the Ptarmigan restaurant for the route back. Wasn't sure I was going to do it, but worth checking it out just in case. 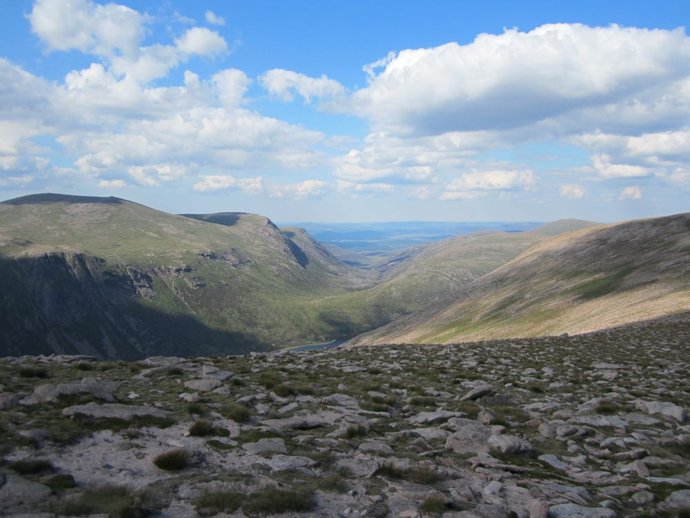 Easy going along the path on the flat top of Beinn Mheadhoin and it's Torrs.
A group from Glenmore with their instructor arrived just before me; wonder where they'd come from, hadn't seen them on the way up?
Turns out they had come up the way I had planned to go down.
Chatted to them for a while, had my photo taken on top of the highest Torr and had a bite to eat. 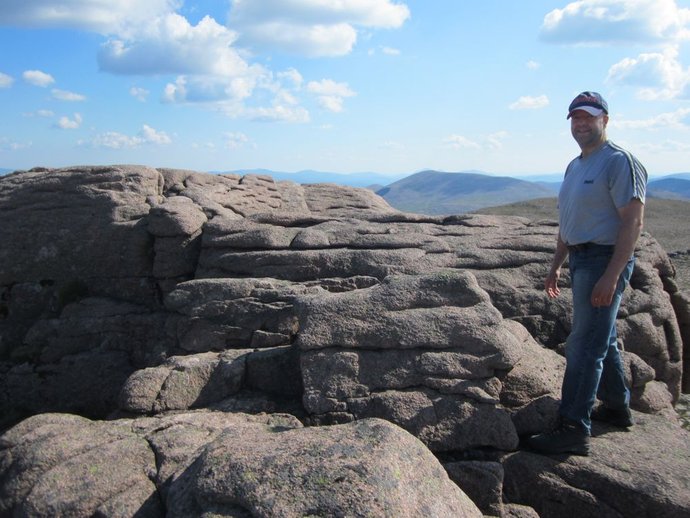 While on top of the Torr a runner approached climbed up the Torr, said Hi and sped off down towards the south.
During the chat with the party from Glenmore, who were on a Mountain Walking Course with their instructor, I inquired about a route down to Loch Avon to the east and was told just head in the direction of a small Torr and I'd be fine. I also asked if they'd got wet crossing the river as it exits Loch Avon and was told they took their boots off and waded across, but they'd also been in swimming

That was that I to was going in swimming 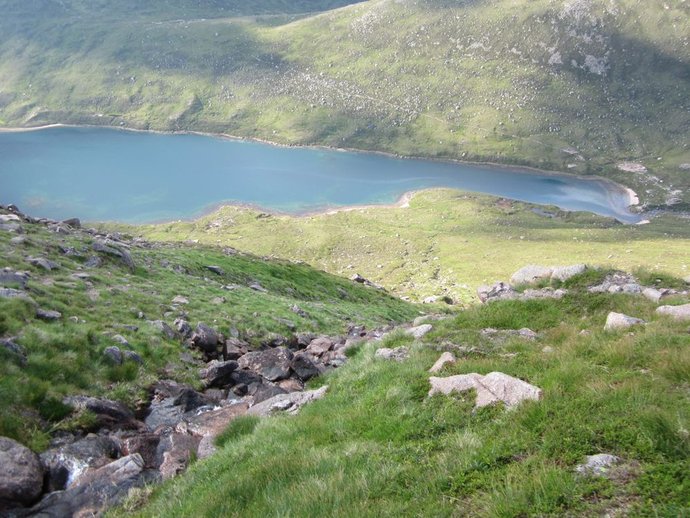 but in hind sight and with a view back up once I got down I would go about one to two hundred metres to the east where there is a more gently slope down.

Off with my boots, socks and jeans and waded across the river to the beach on the other side. 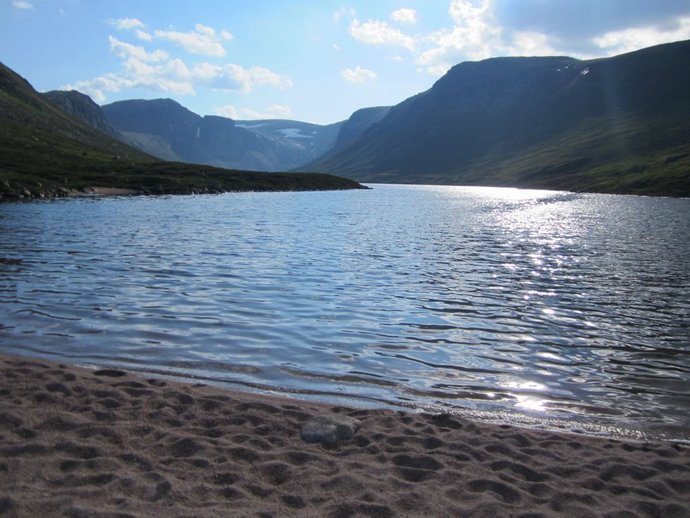 Then off with the rest of my kit and in

The instructor lady from Glenmore had said the water was cold enough when I'd asked, but I found it just perfect in the warm evening. I didn't stay in for long, as I wasn't sure of my route back out and how long it would take, but if I'd know how easy and the time scale of the return journey I'd have stayed for a nice long swim.

Got back out and hoped for some sunshine to dry off. The sun was behind a cloud, but it was warm enough anyway and I soon had my kit back on and was heading along the path up to the saddle. Interesting path, more of an obstacle course over some large boulders in places, but it was bone dry after the weeks of warm sunshine.
Further up the path splits with the option of going up to Cairngorm summit or heading more Northerly. I took the Northerly path which disappeared into a boulder field, but as I say everything was more or less bone dry and after the boulder field I just made my own way up to the top of the ski tows.

Here's a view from the begining of the path out of the east end of Loch Avon, 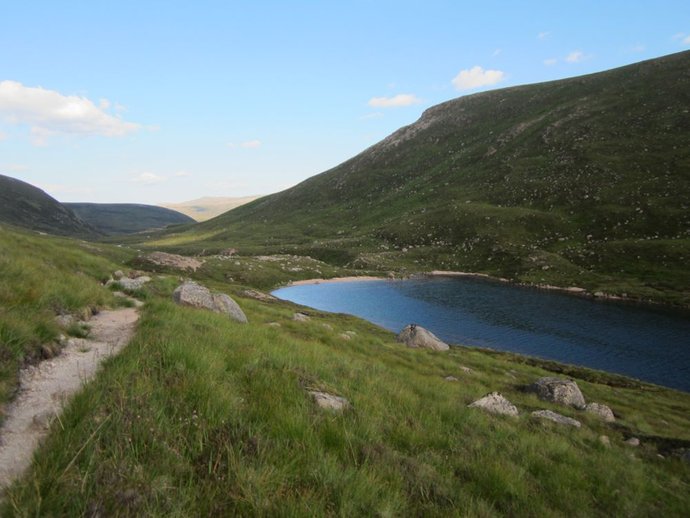 Got to the Ptarmigan restaurant and headed down the traverse and the zig zags top and bottom.
Met a couple heading up for a snow ball fight and said I thought they'd be better going up the staircase to the top of Fiacaill ridge to take in the evening views.

Easy going for me now back down to the car park along burn side. Get to the car and it's still 24° C at 8pm Stopped at Loch Morlich on the way back for the iconic Caringorms view, 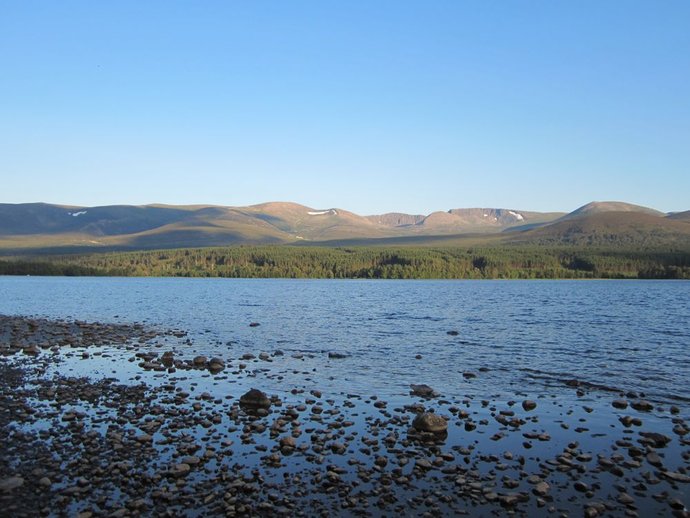 the end of a perfect day in a beautiful landscape.

Cheers dogplodder, one of those great days.
Wish I'd taken a much longer swim, sais la vie. Next time I'm passing that way I'll be hoping for a couple of metres of snow. Maybe next summer.