Typical weather - mostly hot and sunny throughout the week, turning poor at the weekend. Looked like I would have a weather window in the morning to do something, so I finally headed for Applecross for Beinn a' Chlachain. I had been keeping this for a good day due to the potential views out to Skye and back over Torridon, so the resulting greyness was a little disappointing. Still, by parking at Inverbain, I saved myself 10 miles of driving and made a reasonably substantial walk of it (not liking to break my self-imposed rule of needing to spend more time on the hill than in the car). I had tried to sneak this hill into a beach visit to Applecross with Gill last July, when the weather would have been perfect, but she wasn't having any of it (either coming with me or sitting around waiting for me).

13.07_mi_walk_on_26_07_2014.gpx Open full screen  NB: Walkhighlands is not responsible for the accuracy of gpx files in users posts 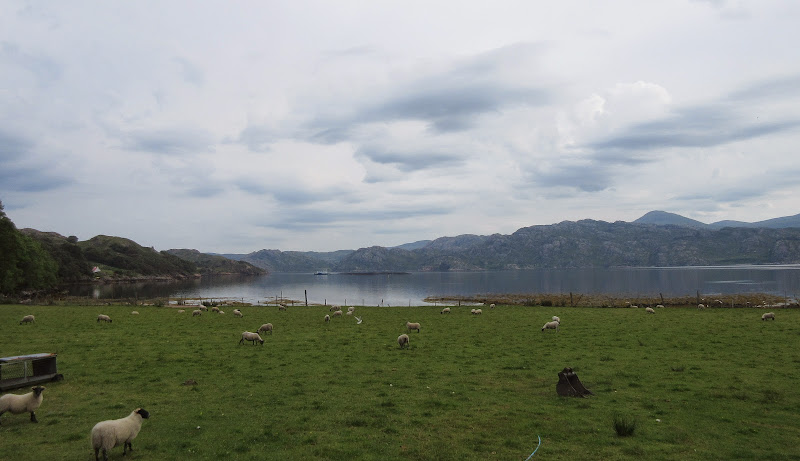 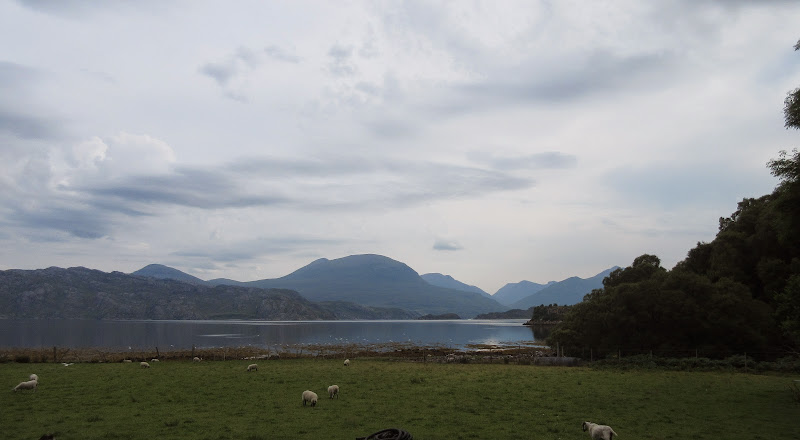 I parked next to the bridge and climbed up through the woods to a couple of barns that were just up from the house at Inverbain, and joined the path over to Applecross. This was good initially, where I passed some impressive falls and a very unintrusive hydro scheme, but then became less distinct higher up.

Path up Allt an t-Srathain: 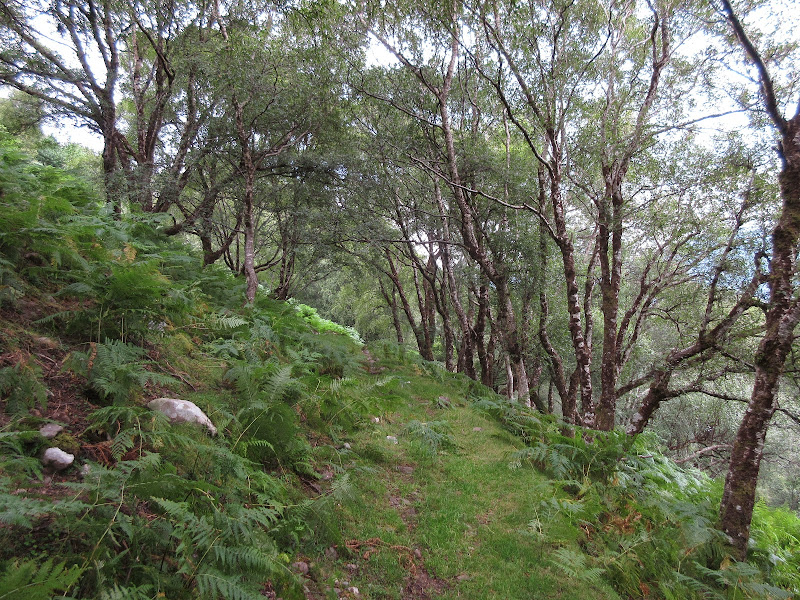 Falls on the Abhainn Dubh: 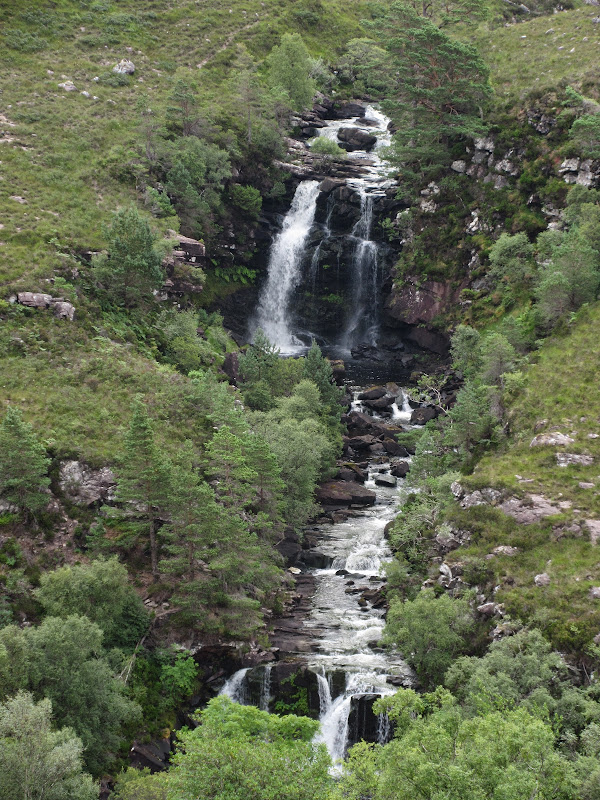 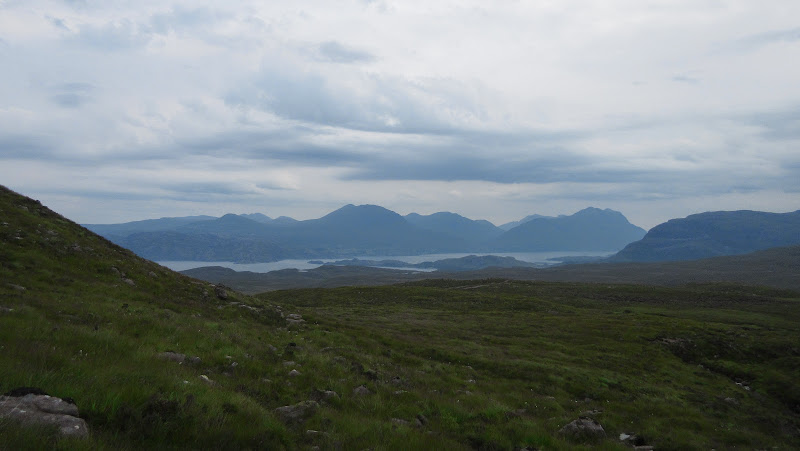 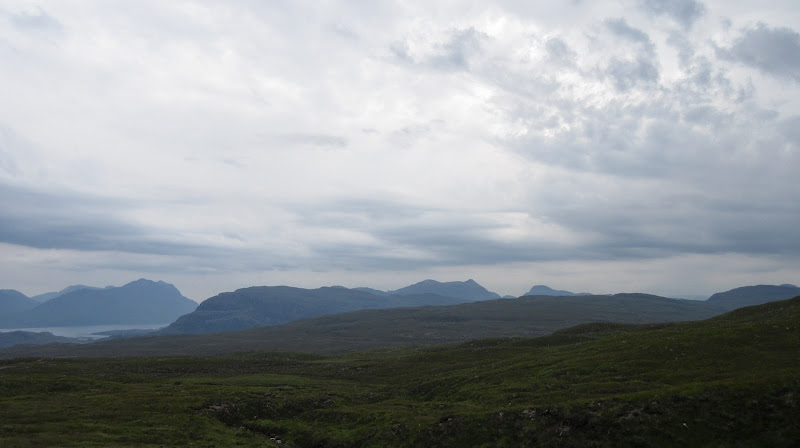 The walking was mostly dry, however, and the path re-appeared at the top of the col, becoming much more substantial on the descent. Croic-bheinn would perhaps make a nice add-in to the route - I decided to see if it was still clear on the way back (persistent rain was forecast mid-afternoon).

After descending a short way I left the good path and took a gate through the deer fence. This allowed me to cut a corner and aim more directly for Meall Arachaidh, which would provide me with access onto Beinn a' Chlachain. The main reason for the paths being well used seemed to be mountain bikers, and I spotted one in the distance now.

Mountain biker heading up the path: 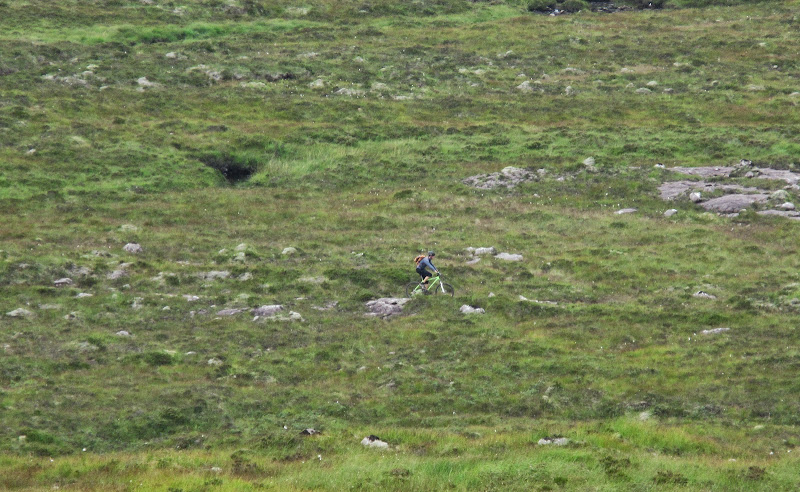 A bridge and my route onto Beinn a' Chlachain: 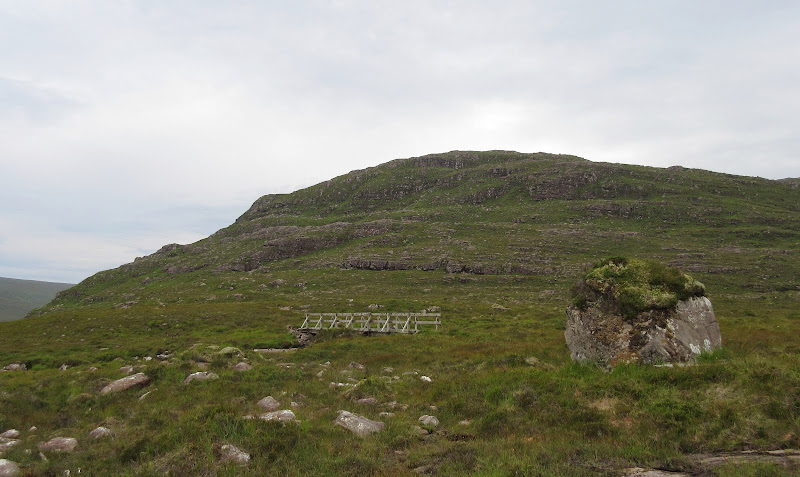 After regaining the path for a short while and crossing a bridge, there was a short sharp ascent onto Meall Arachaidh, followed by some up and down and a traverse of Coire Muchdaroch.

Carn Dearg, on the back side of Beinn Bhan: 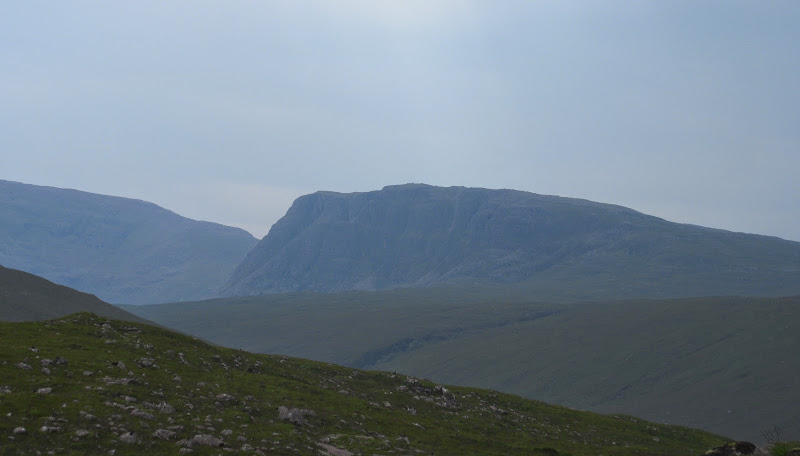 Then it was onto Meall and Doireachan (more steep ascent), round some attractive lochans and sandstone pavements, and up the final ascent to the summit. The first drops of rain hit me here.

Looking back to Torridon from the summit:

The views down to Applecross were good, but Raasay and Skye were mostly lost in the haze and incoming cloud by now. After a break I headed down, dropping to An Dubh-loch this time for a slightly different return route.

Applecross and the Crowlin Islands: 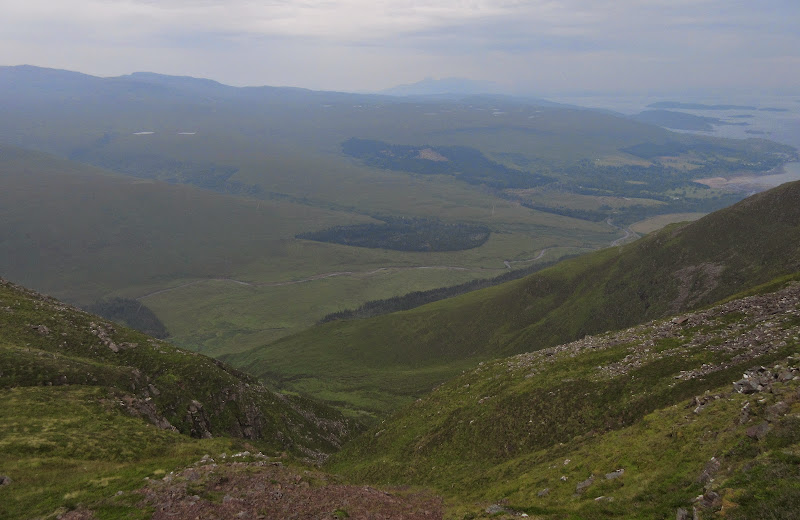 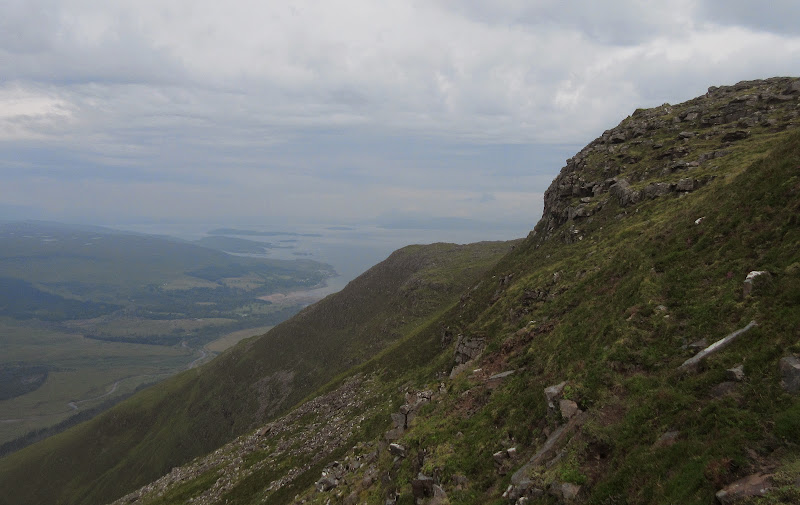 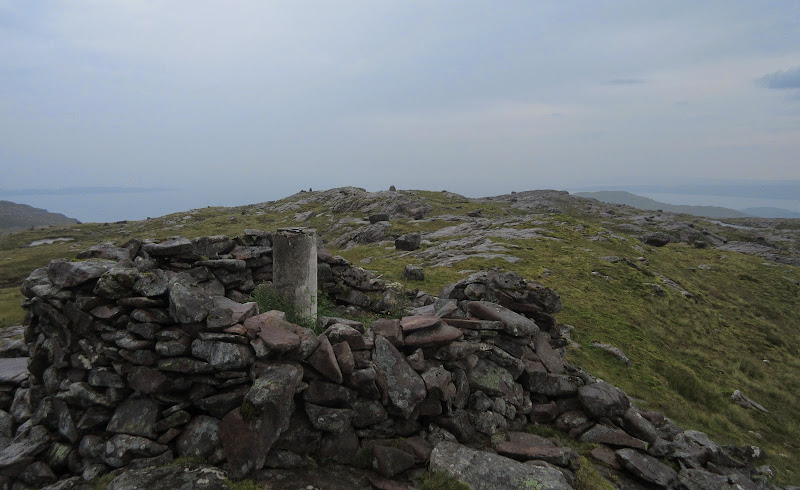 There was some quite rough ground in the col, then a straightforward ascent up Meall an Fhuaid. The cloud was descending on the higher hills now, including Beinn a' Chlachain. More descent took me to an extended bit of bog hopping towards Croic-bheinn and onto the other Applecross path (to Kenmore).

Croic-bheinn - cloud descended so I didn't bother going over it: 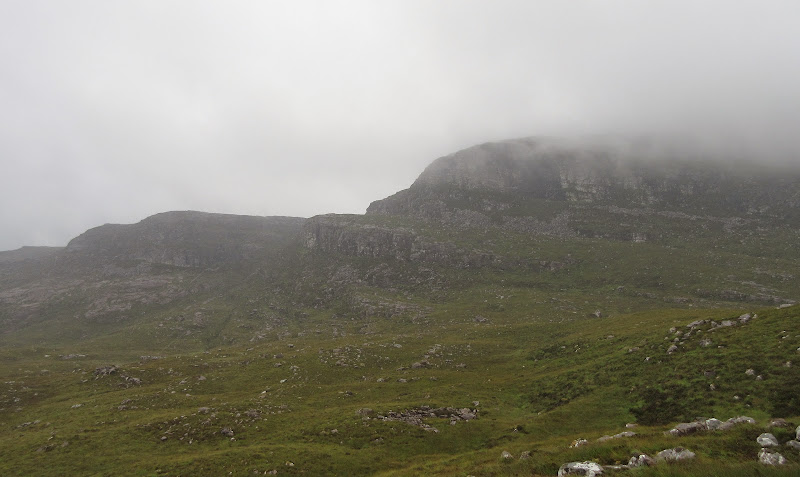 I stuck to the good path for a mile or so, then went cross country again via Loch Ceopach and Loch a' Chaorainn to join my outward route. The going was quite rough across here, and the rain was heavier. 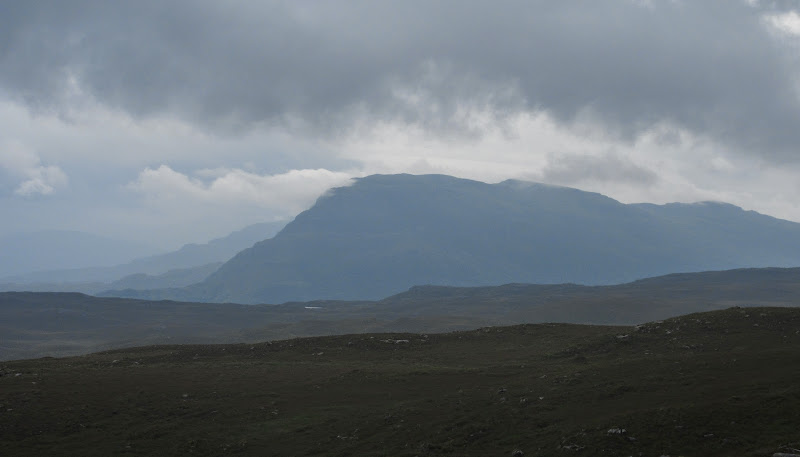 On the wooded section I had passed through on the way up, the bracken and grass was now soaking, making sure my legs and boots got a good drenching before I got back to the car. I wasn't really in a rush to be going anywhere, but the weather was no longer appealing, so I stopped in at the re-vamped Nanny's tea room in Shieldaig for coffee and a scone.

Malky, you certainly don't do things the easy way! That's one long walk to get to the top of Beinn a'Chlachain. I've done this hill at least 4 times now but always from the Applecross side - I think you get the best views that way. But that is a creative route! Pity about the weather - I got caught in it too.