a Bright Polar Star from a Dark Lochnagar

a Bright Polar Star from a Dark Lochnagar

The pondered weather and maps sent me to Lochnagar to the watch sun rise after the bright polar star. Indecision had me hovering about in the hoose until 10pm when I at last set off, encouraged by my wife! I had the plan set in my head: a 2.25 hour drive and then set one foot after the other. My occasional companion sciatica dictated a half way stop for a stretch, which I would have done in any case, and this eased the pain that was onsetting.

Got to the car park alright then set off at about 1.05am without any food but before I could address that error I had to answer a sudden call of nature, trowel in hand. So probably at around 1.30am I was on my way proper.

I didn’t remember this being so very easy from my two walks there in 1991, though only one of these had been from Loch Muick. To explain, although I was walking in near darkness and relying on my poles to avert disasters, I found the way surprisingly easy. I even had an elaborate plan B to contour round steep ground but I found that the boulder shoulder I feared would cause me problems was almost now an extension of the obvious path improvements made since I was last here. The early part of the route is very easy walking, the mid part a bit more stony, and the remainder of ascent largely like a pavement though with some fading around the middle. So a largely uneventful and easy walk to reach the foot of the “ladder”. This, in 1991, must have either been in a far worse state of stability or else we ascended further west for views of the corrie. On this occasion what struck me was the stability of the large boulders, the fact that I only really felt like I was boulder hopping for about five minutes and just the general relief that I hadn’t had to strain my back at all.

I was actually near the start of the corrie edge way ahead of schedule and way ahead of sunrise -3.35am. Only 1hr 20 minutes to wait! Or not, as I ‘d not taken account of the fact that sunrise would be a little earlier (15 minutes) than the sea level time listed online. Still, there was a spectacularly lit crescent moon to admire and, presumably, Byron’s polar star so hanging about for a wee while wasn’t unpleasant. I experimented with taking photos and video in the gloom but without much to show for this but when it became light enough for both I continued my progress westwards.

The plateau affords very easy walking indeed with grand views from the cliff edge down to the loch and its pater-nosters. The cliff scenery of the east end is easily outdone by the west end. The latter presents a few more metres of ascent –easiest, I found, right on the corrie edge. The remainder of the cliff edge really is a treat for anyone who likes that sort of thing with great imposing vertical slabs and pinnacles viewed from the grass carpeted plateau edge.

I could have happily spent a lot more time wandering the cliff tops but this morning walk was calculated to allow me to get to work more or less on time, which I just about did. 7 Half of the sun sitting on Bennachie. 8 Half way round the lip of the corrie. 13 Poles not really needed apart from in the dark, head torch only used very occasionally. 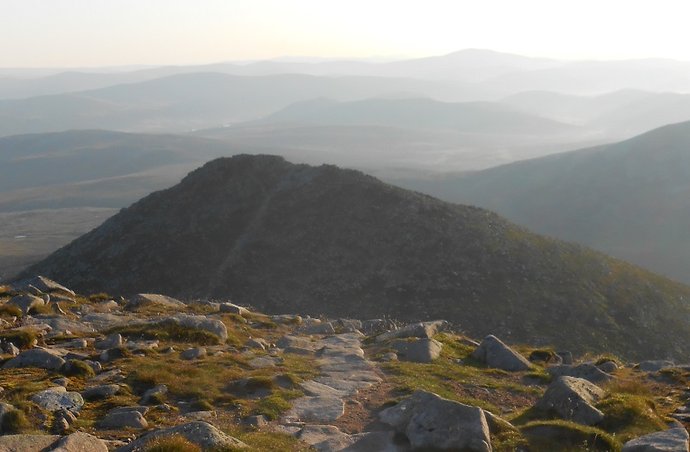 16 An easy pavement characterises a lot of the route between the bealach and the track up from Glen Muick. 17 The beautiful pine lined early part of the route. I've been thinking about an evening/early morning Munro climb for a few months now but never got round to it - this looked like a brilliant experience.

Gordie12 wrote:I've been thinking about an evening/early morning Munro climb for a few months now but never got round to it - this looked like a brilliant experience.

Ease of access certainly makes it a good choice for either end of the day. I was inspired to go by Alastair S's classic report and a MWIS hint of an inversion. The path improvements have certainly changed my perception of the hill from twenty years ago as did the walk along the cliff tops which left me with the impression of a giant half eaten apple. Also makes me think of St John's Head and how the cliff there is higher than the highest cliff of the northern corrie.

What a stunning morning.And the light....just beautiful.You certainly got close to those edges! Wish I had a head for that.

Anne C wrote:What a stunning morning.And the light....just beautiful.You certainly got close to those edges! Wish I had a head for that.

It was a very fine morning and just a pleasant surprise to see all that path improvement.

Wow, you pulled an all-nighter! I think that's much more sensible than carrying all the camping gear

Photos 7, 12 and 13 are my favourites. Sounds like a fantastic experience.

AnnieMacD wrote:Wow, you pulled an all-nighter! I think that's much more sensible than carrying all the camping gear

Photos 7, 12 and 13 are my favourites. Sounds like a fantastic experience.

Yes it was a really enjoyable walk. Didn't feel that sensible though at various points before and after the actual walking. Finally fully caught up on my sleep on the Saturday.

P.S. Just recently noticed on the video that there is audible white noise whenever the camera is pointed directly at the sun. Hadn't noticed this before but I suppose it makes sense. Probably been mentioned before.