After putting off this walk over the past few weeks due to a combination of cack weather, other options and to be totally honest, laziness, I finally decided to get this done on Wednesday last week. When i say finally decided, I mean it. I was still sitting at home at 8:30am nursing a coffee and decided to get a move on. Arrived at Loch Moraig's wee car park at about 10am, just after the morning mist had lifted. It's a pleasant wee drive in, with Carn Liath popping into view now and again on the way. 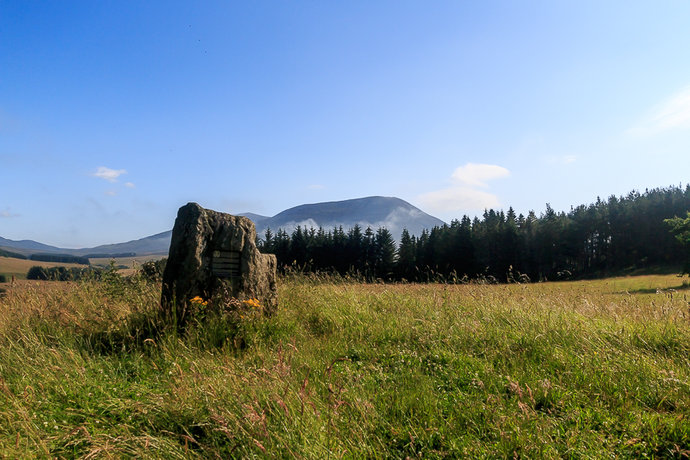 View from the Monzie Road

I quickly parked up and got ready. There were a couple of other walkers setting off at the same time. Unfortunately, due to my disorganised start to the day, I hadn't bothered with sun cream, a mistake I'm still paying for five days late

It was absolutely scorching hot as I set off through the access gate and along the landrover track. It's roughly a mile until you reach the hut which marks the turn off point to head for Carn Liath. The track's gradient is a nice gentle incline and views start to open up in all directions. 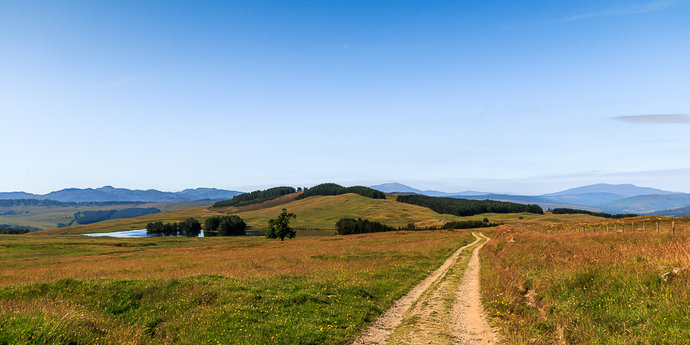 Soon the hut is reached and I duly clambered over the stile and made across the still boggy terrain to head for Carn Liath. 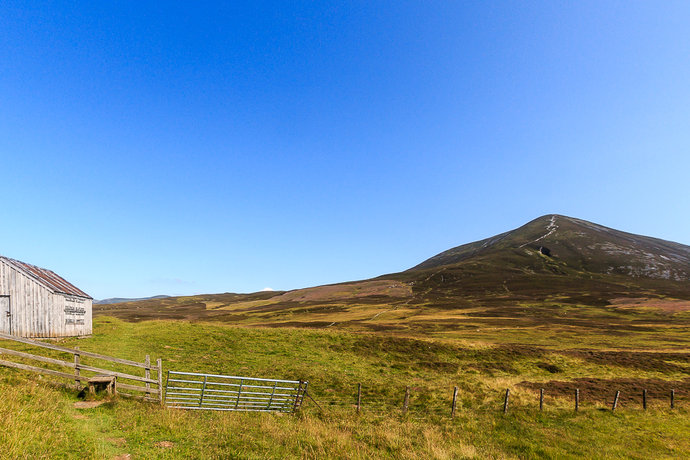 Once past a few hundred metres of boggy nonsense, the path follows an old wall, gently climbing. This section is much more pleasant and the soon the base of the first munro is reached. I could already feel myself slowly frying 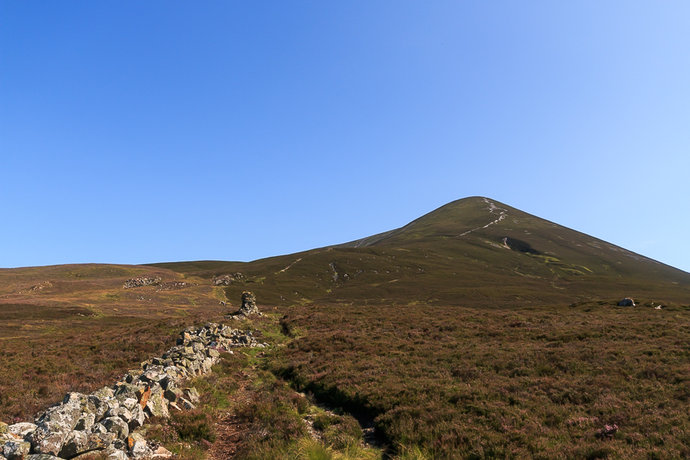 From afar, Carn Liath looks a horrible steep slog up a scree path. However the climb itself isn't all that bad. The path zig-zags within the scree scar that can be seen for miles around. Despite a couple of brief stops to take some photos and curse my own failure to remember sun cream, i made the first summit in around 1h30m. It's quite a nice final stretch to the summit, with a cairn then a trig, then the summit cairn. 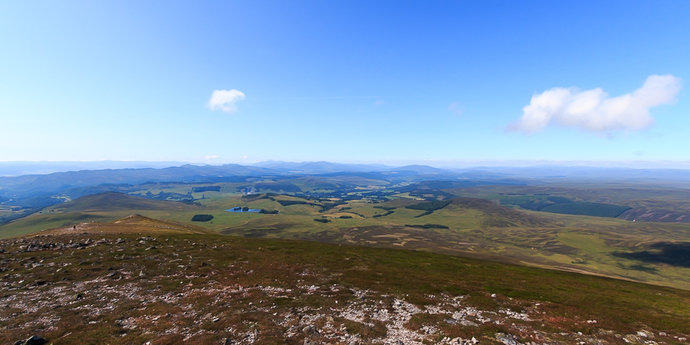 Nearing the summit as the gradient eases off 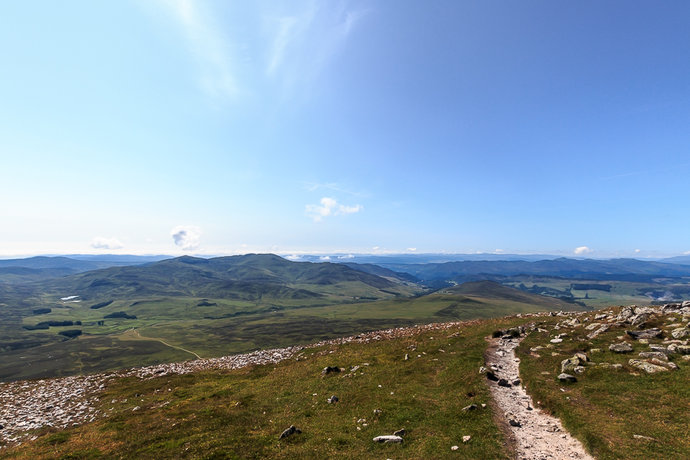 The real reward however is the view upon reaching the summit cairn itself. The ridge leading to the bump of Beinn Mhaol winds it's way from the NW shoulder of Carn Liath up to Braigh Coire Chruinn-Bhalgain, with the bulk of Airghod Beinn to the NE and onto Carn nan Gabhar. It's a truly wonderful vista on a day such as this. I sat down to enjoy a wee lunch and take it all in. 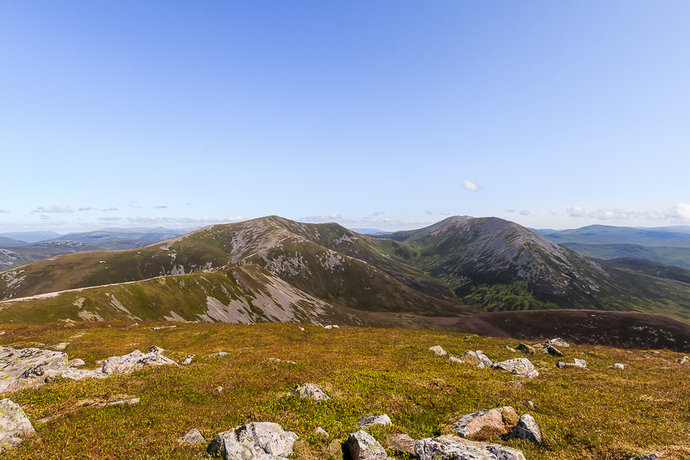 After a wee while, I set off towards munro Number 2, Braigh Coire Chruinn-Bhalgain (or BCCB as it shall be known from now on). The walk along the connecting ridge is hugely enjoyable, with cracking views all round. I stopped for a couple of photos on the wee bump of Beinn Mhaol. 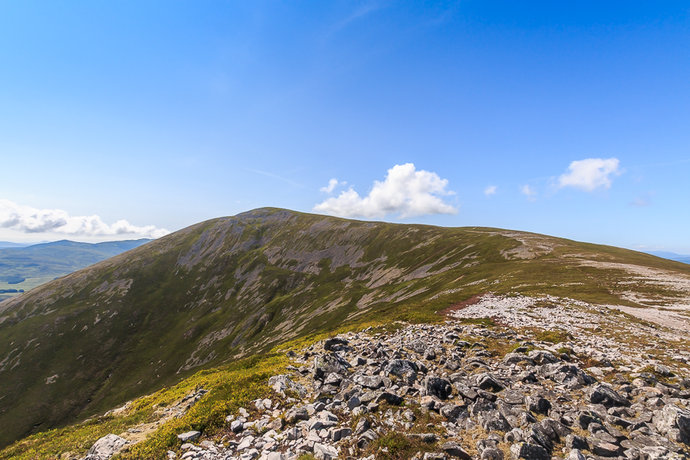 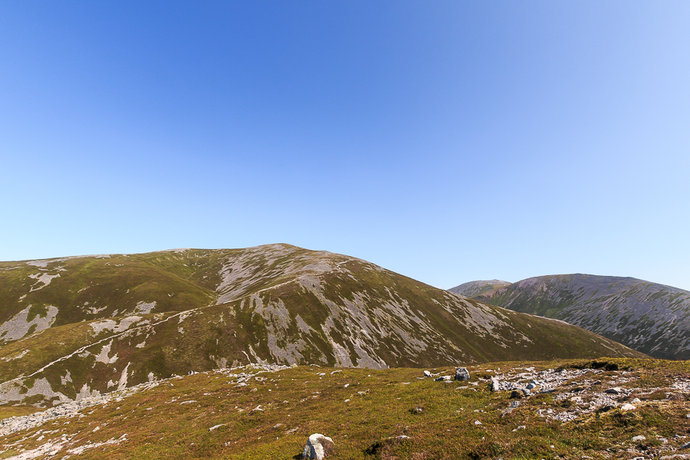 Shortly afterwards I dropped to the low point of the bealach, and started gently climbing again. The heat continued to be stifling, and my skin continued to fry. The walk to BCCB is pleasingly gentle and I was soon as the summit cairn, with fine views to Carn nan Gabhar, and a particularly enjoyable view back to Carn Liath. 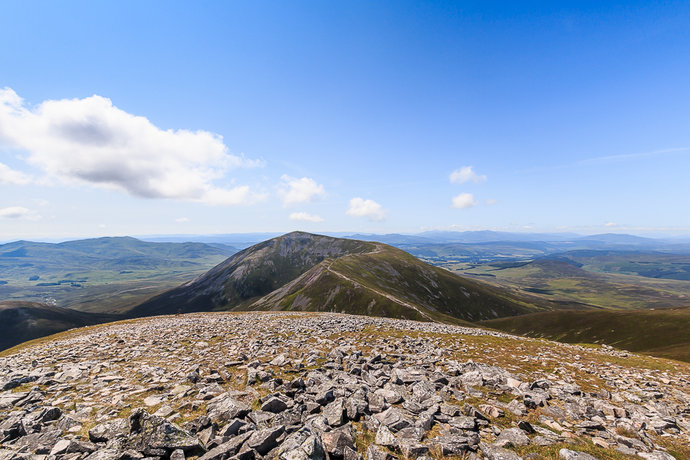 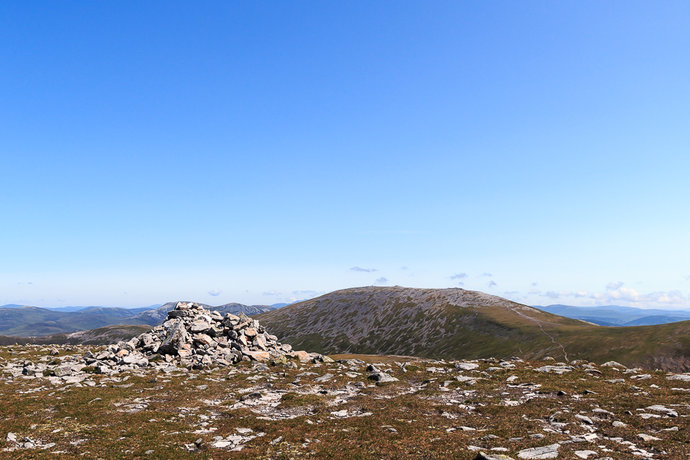 I was making good time, getting here in 2h 45m, and wondered if i could get back to the car within the 6 hour mark. I decided not to stop here, touched the cairn, took the photos and headed off to drop down to Bealach an Fhiodha. There's a slight drop from the summit initially, I then followed the path on the mini-plateau for about 500m from the 1016m spot height and easily descended, meeting the rough-ish path to the bottom. Again, it's a reasonably easy ascent as the path cut diagonally NE up the side of Carn nan Gabhar, before eventually reaching the boulderfield summit plateau. The actual summit is the last of three markers on the plateau, with a large cairn, then a trig point beforehand. Despite the heat, there was a nice breeze on the tops. I'd got here in 3h 45m and decided to have a bit to eat, and enjoy the views for a while. 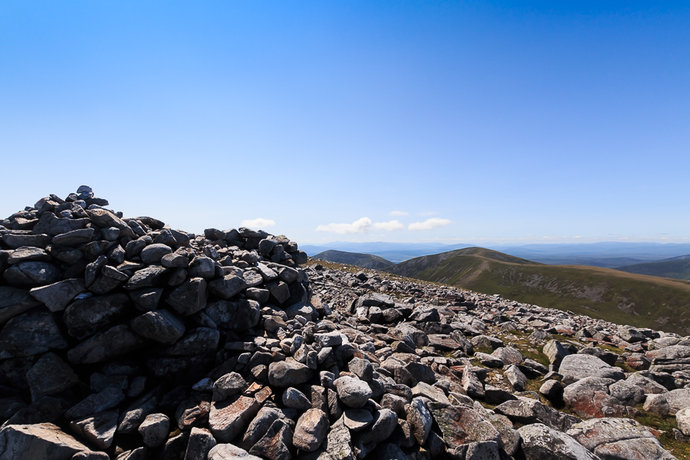 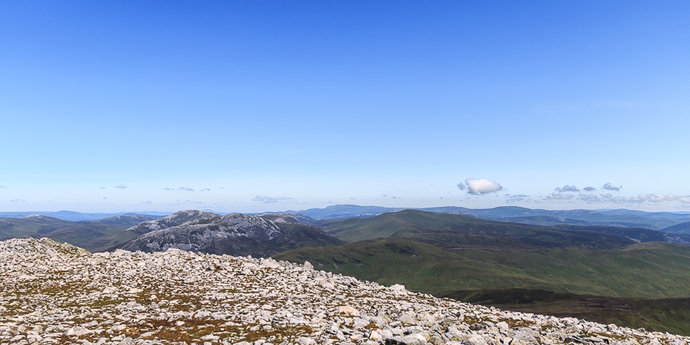 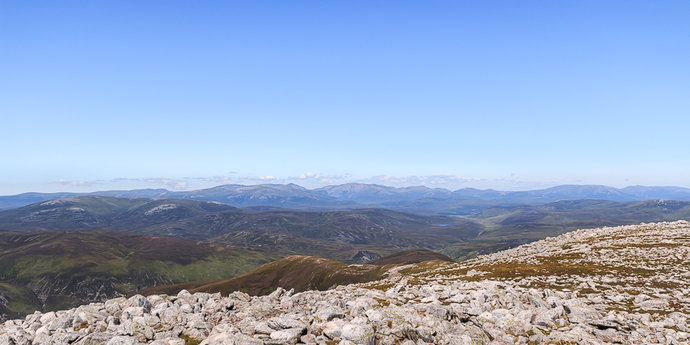 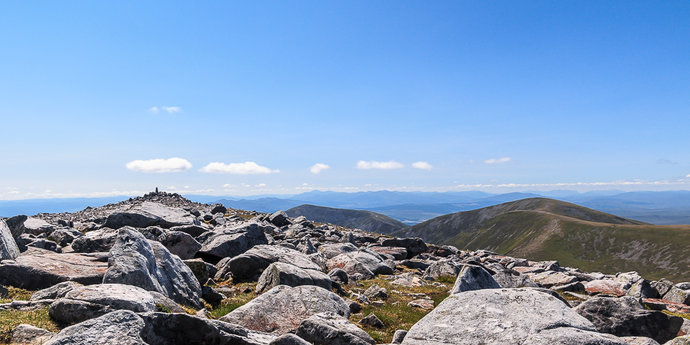 The views from the summit were sublime, and had I not had a long walkout to be getting on with, I'd have happily lounged about there for hours. After half an hour here, I made for the Bealach again. I'd previously considered going back over the first two munros and down Carn Liath to avoid the boggy tedious walk out, but given the dry weather recently and today's scorching sunshine, I decided this would be bonkers and followed the WH exit route. It was mostly dry, although god knows how bad it would be in spring or after a rainy spell. The path is initially easy to follow, then does a few disappearing acts in the heather. 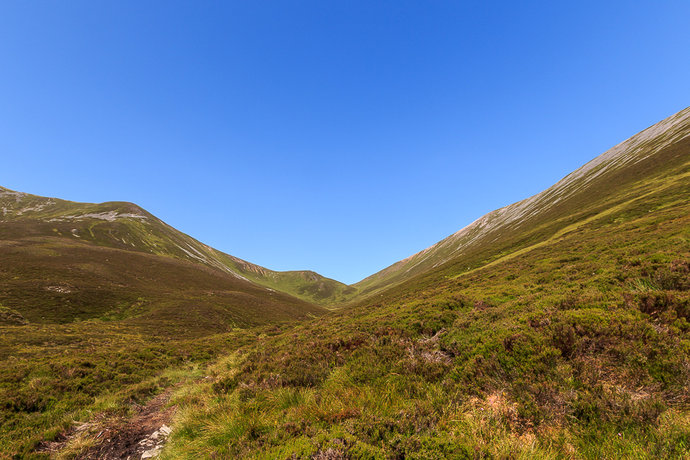 Soon the river is crossed and the seemingly never ending traverse around Beinn Bheag, and then Carn Liath must be endured. Again the stalkers path was pretty decent, thanks to the recent good weather. Just loooooooooong. 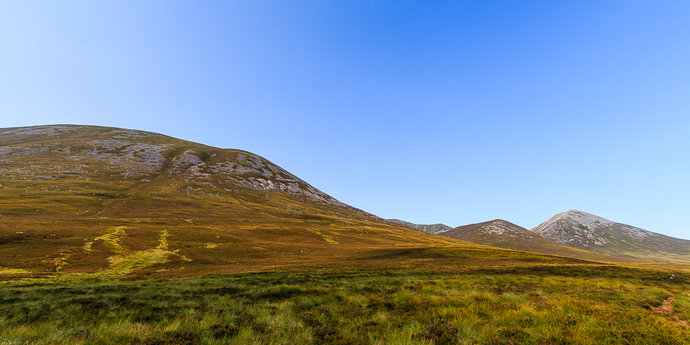 A last look at the day's efforts

The path splits once you've passed Beinn Bheag. I took the right fork, which eventually led me to the landrover track, and a couple of more miles to get back to the car. My vision of a sub-6 hour walk proved ridiculous as the walk out itself took almost as long as the three munros had

I arrived back at the car, by now a veritable oven and had a right laugh at the magnificent sunburn I had got.

This is definitely a walk to 1. Save for a nice day, and 2. After a few days if decent weather. It's an absolutely brilliant walk and i'd highly recommend it to anyone yet to do these hills. Great views, not particularly brutal ascents and nice summits. The walk out sucks, but you can't have everything

What an astonishing difference from my attempt two weeks earlier. At least on the top.

Well done for carrying on in the heat...

. You are right - it should be saved for a good day.

Thanks for the comments. It's a fantastic walk, can't believe i've put it off for so long

Thanks mate. It was an absolute scorcher with really clear skies. Great day and a great range of mountains

rockhopper wrote:you got a cracker of a day for this walk - lets you see the ridge as well as surrounding views properly

It was actually better than I'd been expecting

It must be dreadful after a more "typical" scottish summer.