As part of my campaign to drive less to get to the hills, I decided I could save myself a long drive round to Ardgay and Glen Calvie in order to climb Carn Chuinneag by approaching on my bike from Strathrusdale. This was my last Corbett in the region, and my plan had always been to include Carn Salachaidh in the walk whatever way I approached it.

A short drive (about 35 miles) brought me to the start of route at Strathrusdale, where there is parking for 2 or 3 cars. This was my first visit to the end of this glen, although I'd previously climbed Beinn Tharsuinn from a few miles back down the road. A pleasant place, off the beaten track. The route initially followed a forestry track up through the woods, the surface of which was pretty good, although occasionally wet. It appeared to have been tarmacked at some time in the distant past all the way over to Glencalvie Lodge, but much of this is overgrown/broken.

Once out of the woods, there was a blockade of boulders, presumably to prevent any through traffic. Mind you, you would need a 4x4 to get through. My guess is that this used to be a public road way back in the middle of the last century, but had been offloaded to the estate by the local authority. 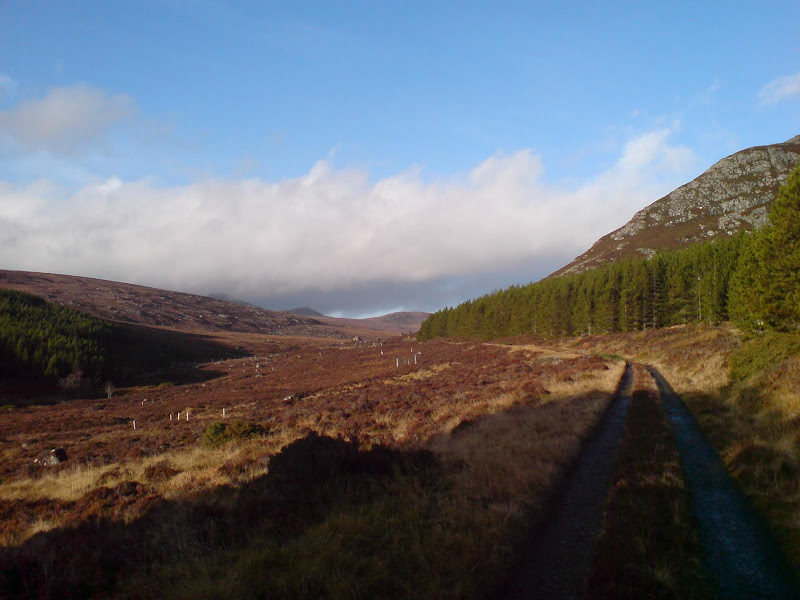 Beyond the blockade the surface became better still, leading around Lochan a Chairn and past the remains of a lodge. There was a delightful feeling of remoteness and neglect up here. I ditched my bike a mile or so further on, at the beginning of the stalker's path towards Loch Chuinneag.

Aside from an initial wet section crossing the Allt Lochan a Chairn, path up past Loch Chuinneag was very good and sped me up the hill to within 100m of the W summit.

Carn a Choin Dearg from the ascent: 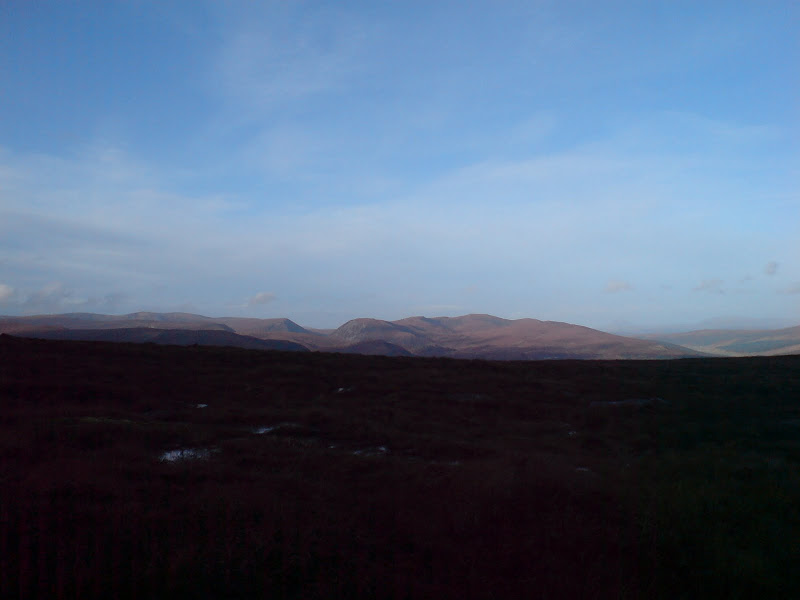 Although it added a little height and distance, I decided to take the western summit in as well, before main summit. The ground was very dry and sandy up high with sandstone tors. It was very reminiscent of Ben Rinnes in the NE. There were desolate views over Glen Morie to the south (soon to get a windfarm I think) contrasting with lush Alladale to the north. I made a mental note to visit Alladale, as it looked beautiful. I thought possibly a cycle through from Strathrusdale to climb Carn a Choin Dearg (in the event I ended up driving round and climbing this with Cuillin and RCFC by a more conventional route). 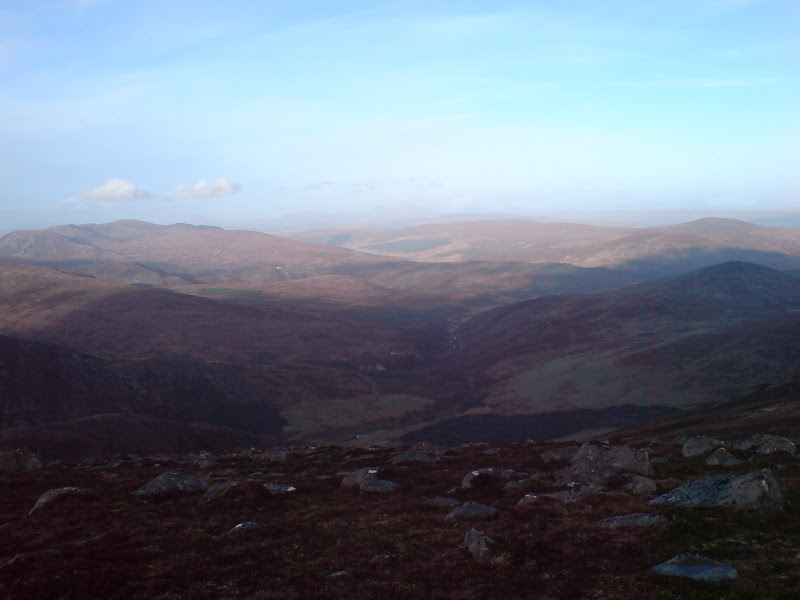 Carn a Choin Dearg and Carn Alladale from western summit of Carn Chuinneag: 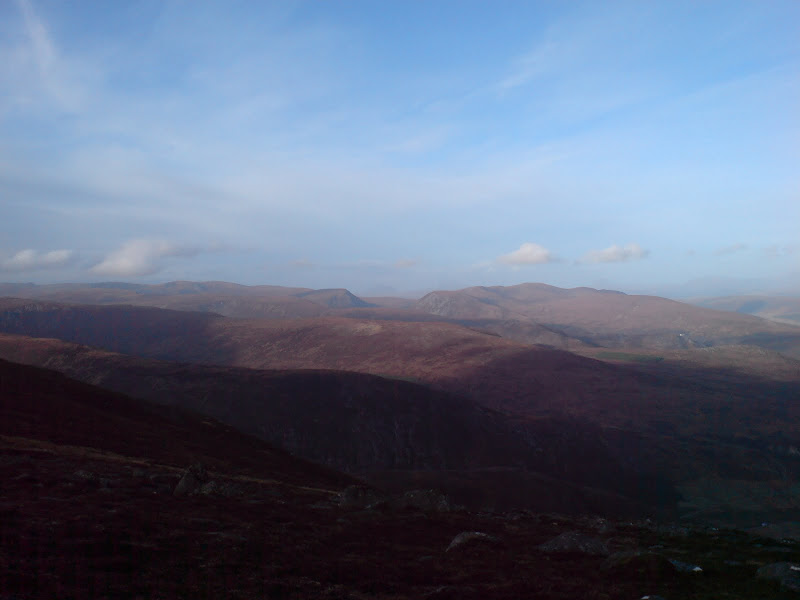 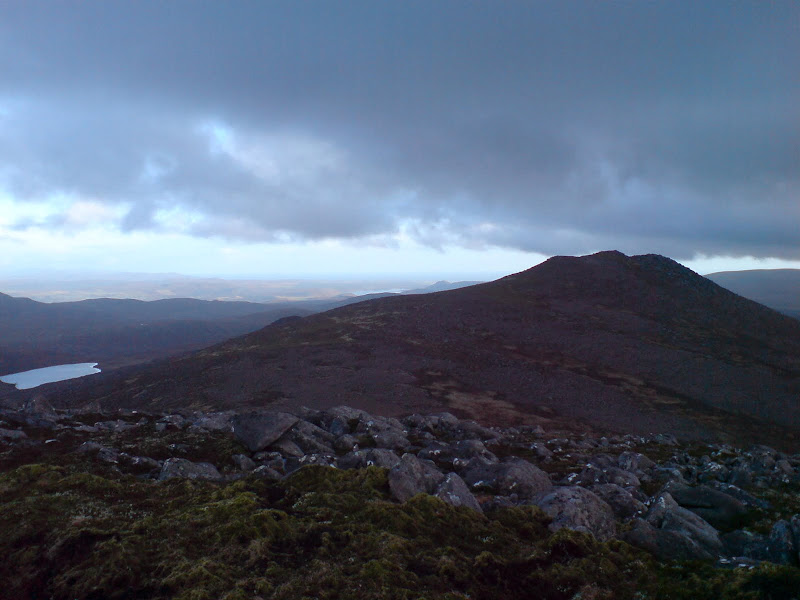 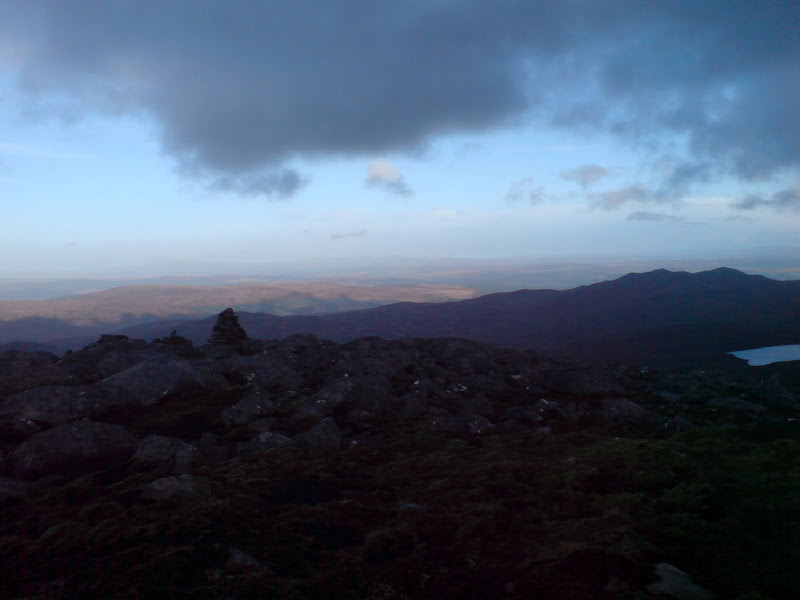 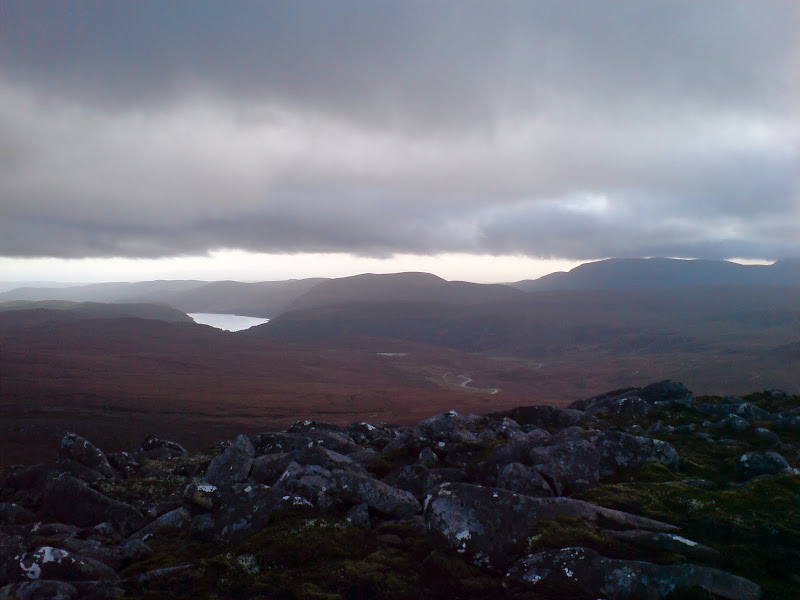 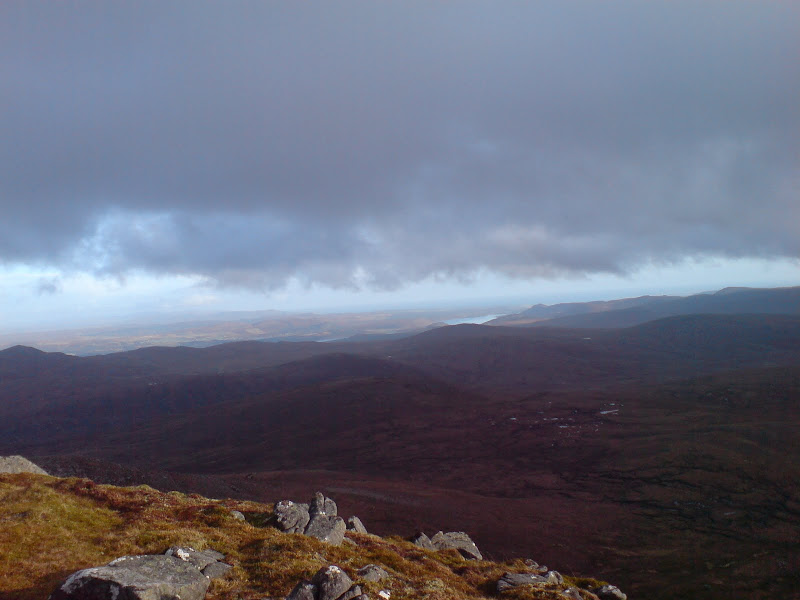 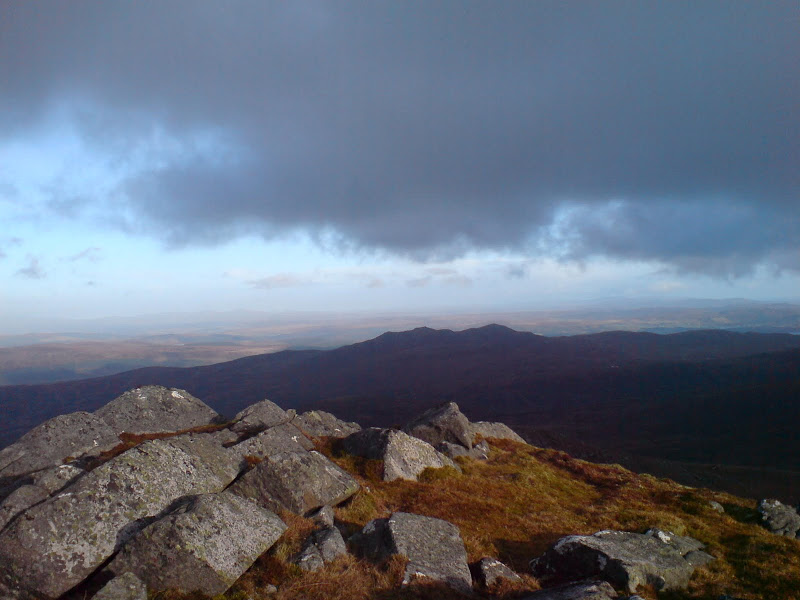 West to Coigach and Assynt: 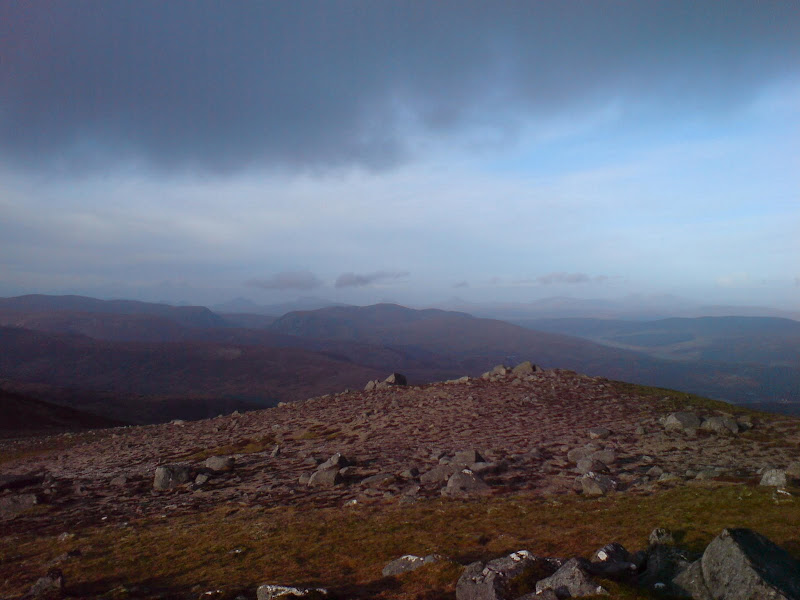 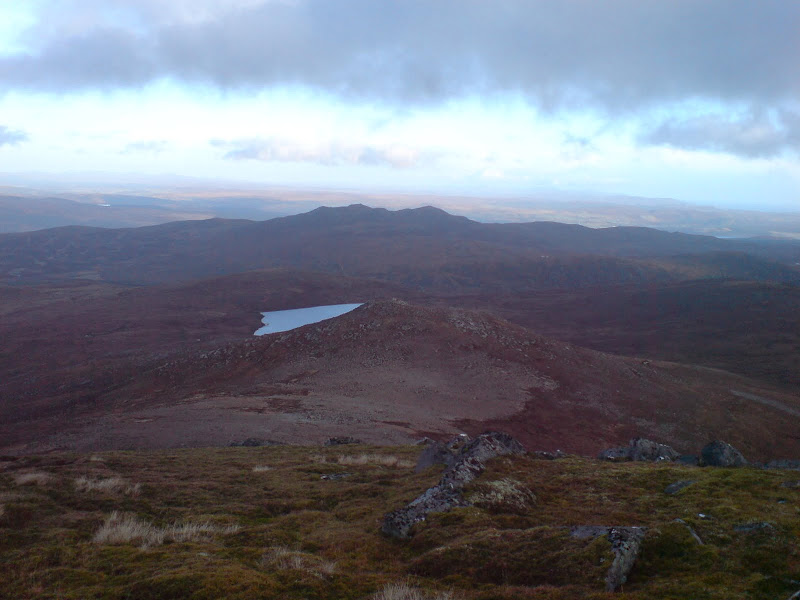 Rather than drop straight back onto the stalker's path, I opted to take in the tor of Carn Maire. An easy descent by boulders took me across this for a minute or so of fun scambling, before thicker heather led me back to the stalkers path back and my bike. 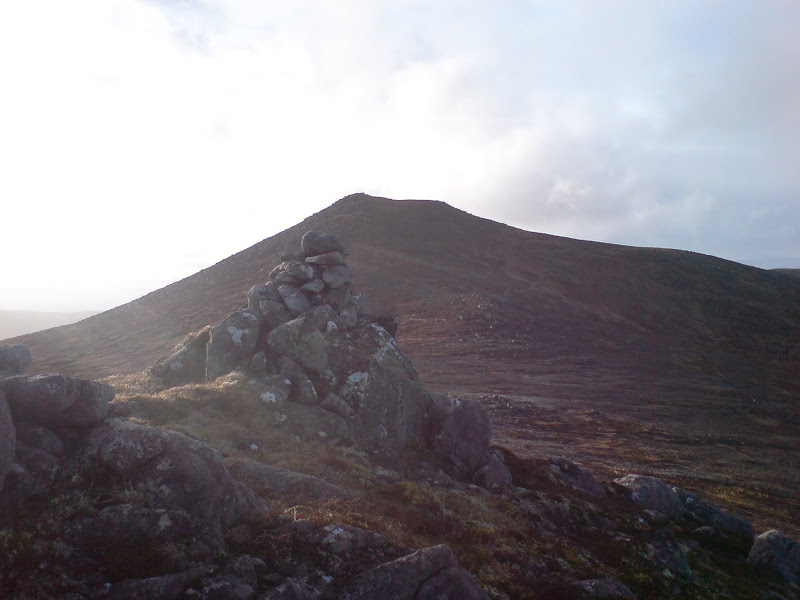 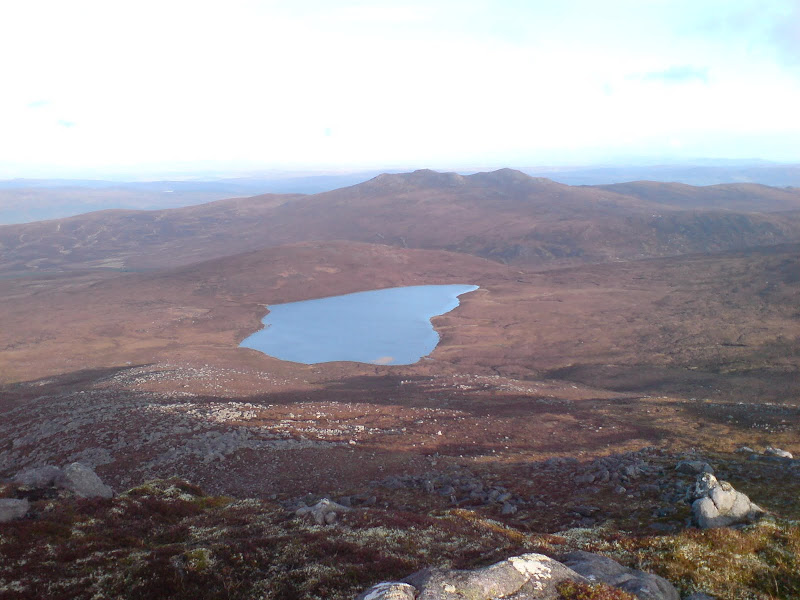 On the other side of the track, a new section of bullozed track led a km or so towards Carn Salachaidh. It looked a bit ugly, but was useful for cycling closer to the hill and cutting out some rough terrain. From the end of it, I did a quick circuit of Carn Salachaidh and Carn Bhrain (going over to this lower top for a better view E over the Dornoch Firth). The ground hereabouts was very rough and wet, with lots of deep heather. On the summit of Carn Bhrain, I met a couple from Ardgay/Bonar Bridge - they had climbed from that side as they could see the hill from their house. 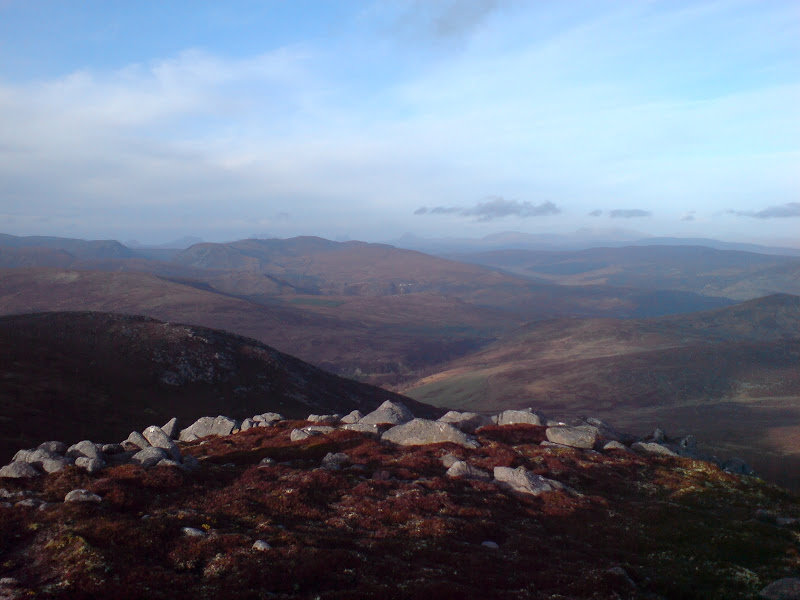 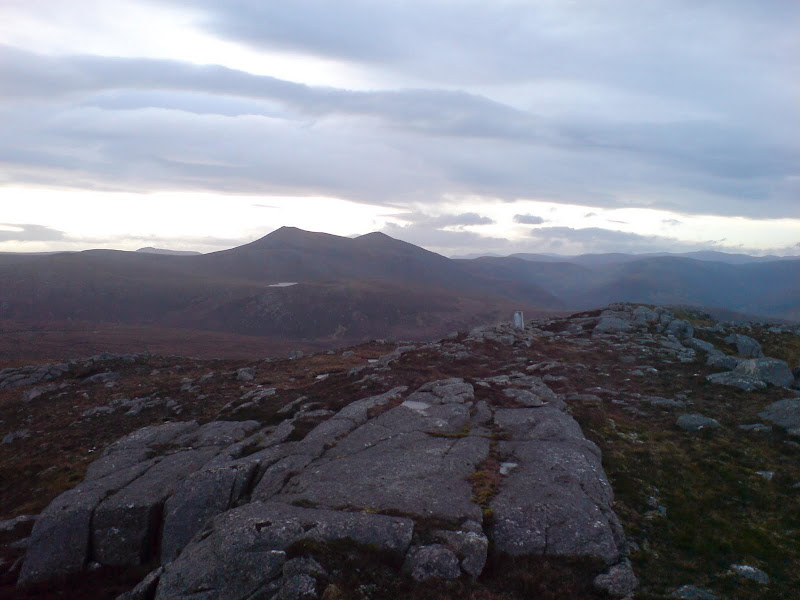 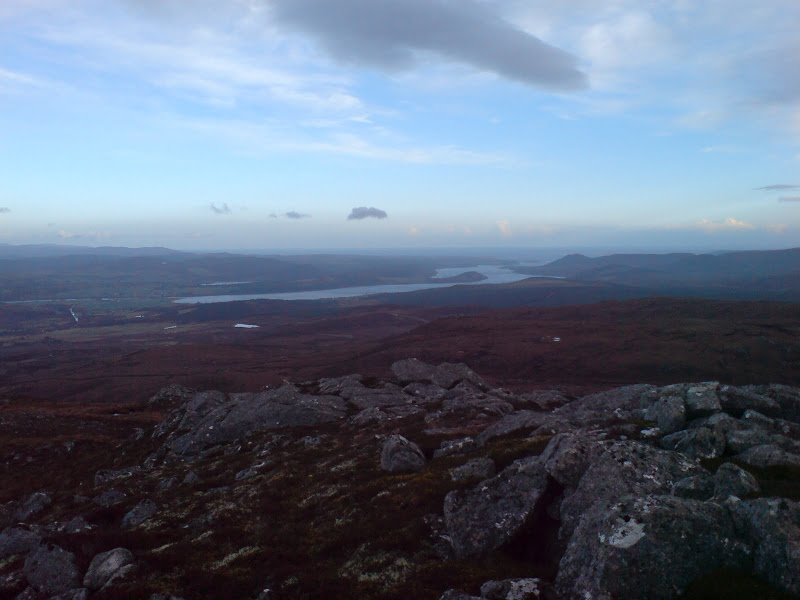 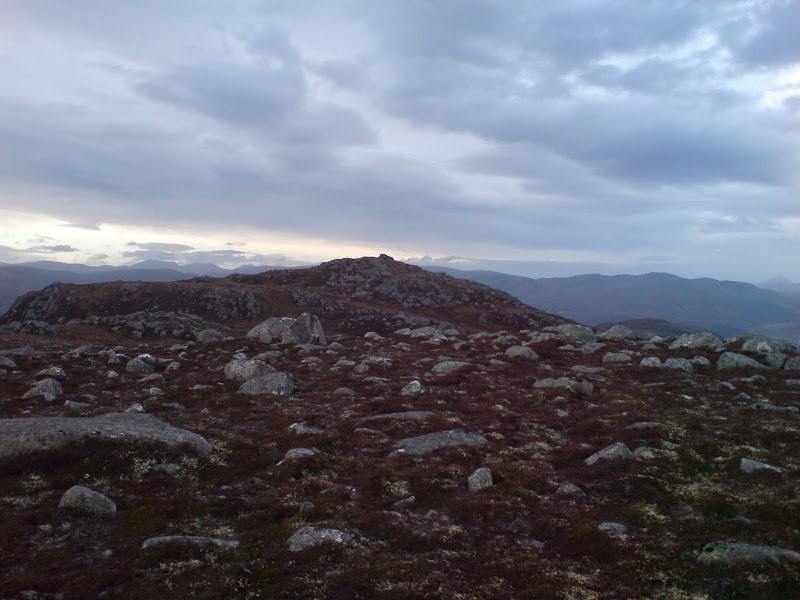 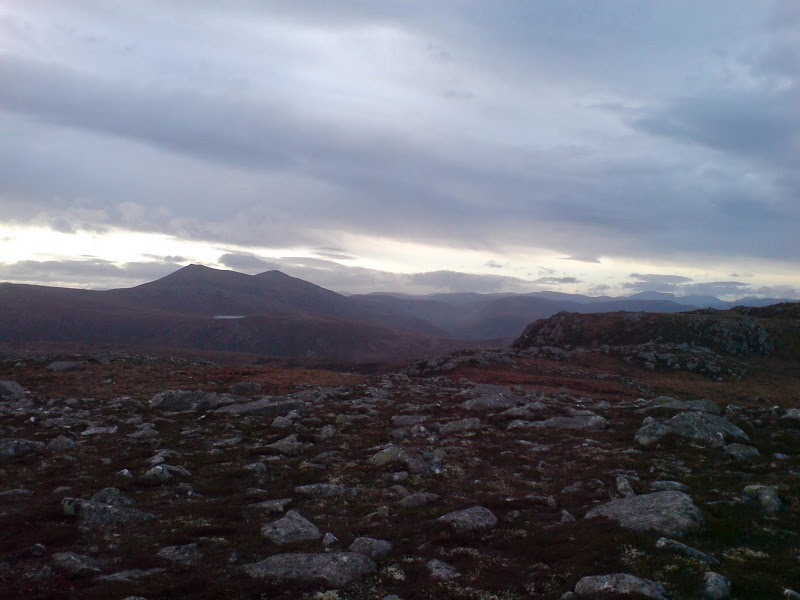 I retreated in a slightly different direction over the rough ground, and dropped quickly back to the car on my bike. As usual, charging through the puddles and streams on the way back got me covered in mud. 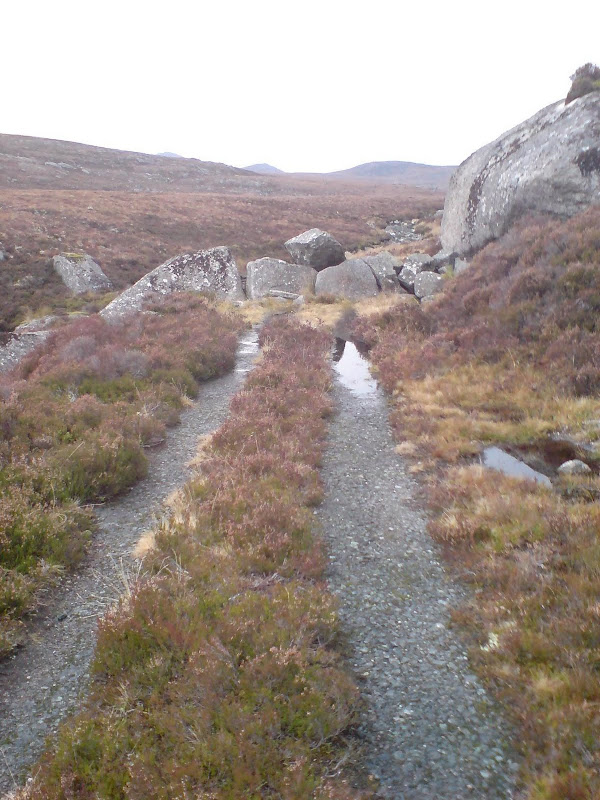 A good route. This hill is probably still best climbed from Alladale due to the scenery at the beginning, but Strathrusdale was still very pleasant. I could see potential for lots more exploring on the bike around Loch Morie.