The sky's the limit on Pressendye and the Buck

The sky's the limit on Pressendye and the Buck

Grahams included on this walk: Pressendye, The Buck

Saturday had been a little disappointing, an all-pervading greyness taking the edge off what should have been a spectacular walk on the Applecross peninsula. Sunday dawned with rain, and I didn't get up early. I decided to get on with writing the synopsis for my professional qualification report, and procrastinated over that for hours. I thought about heading out at lunchtime, but I hadn't written anything by then! Finally by late afternoon, I had something down on paper, and the weather was warming up. Feeling a minor sense of achievement, I packed a bag up and was on the road for 5pm.

East was the way to go - in fact far east, east of the high summits and into parts of Aberdeenshire I was unfamiliar with. Having made an effort yesterday to spend longer on the hill than in the car, I broke that rule this evening. I had been keeping these hills for a cycling expedition between Insch and Huntly stations - the perfect day out for some future time when I didn't have access to the car. However having the weekend and the car to myself was making me lazy.

I didn't think I'd need a map for these two - just as well as I didn't have one. I grabbed a couple of screenshots of the relevant areas on my phone just in case, as I do have a tendency to get lost at the start of walks, especially on agricultural land. Some of the showers on the drive over were so heavy I almost had to pull over, but the sun was shining at Tarland, and I managed to park above Easttown farm on the track.

Summit of Pressendye from Easttown: 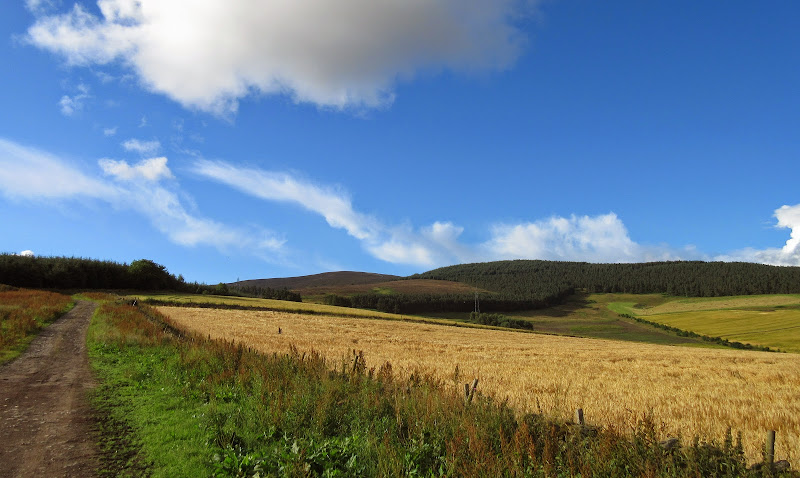 There were any number of farms and tracks I could have begun at, but this one looked as good as any, and I could see a route up the broad southern ridge of Pressendye.

Pressendye.gpx Open full screen  NB: Walkhighlands is not responsible for the accuracy of gpx files in users posts
Looking towards the Dee: 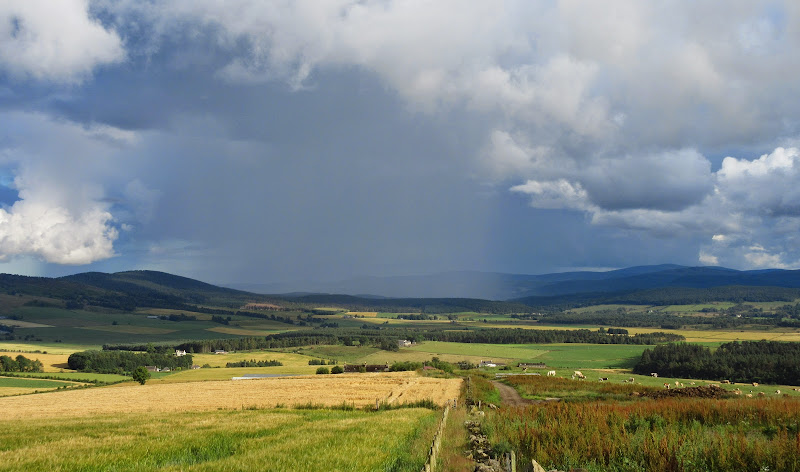 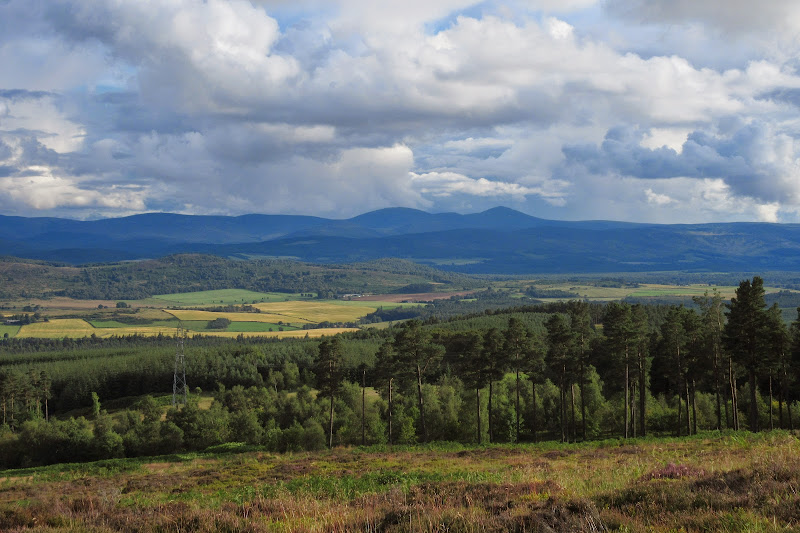 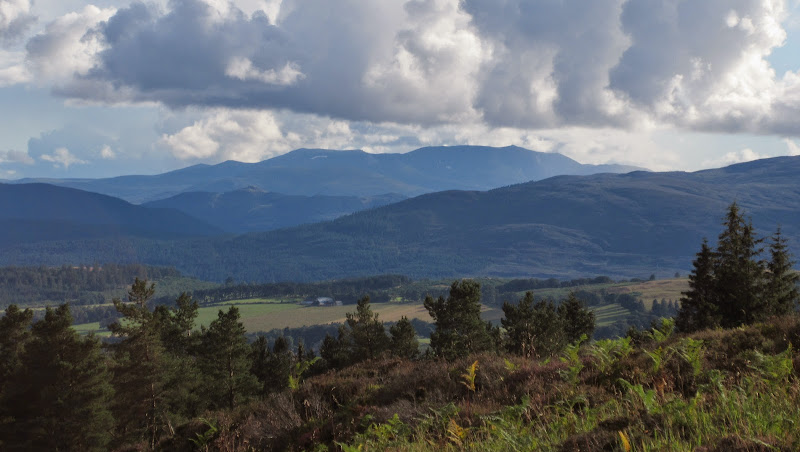 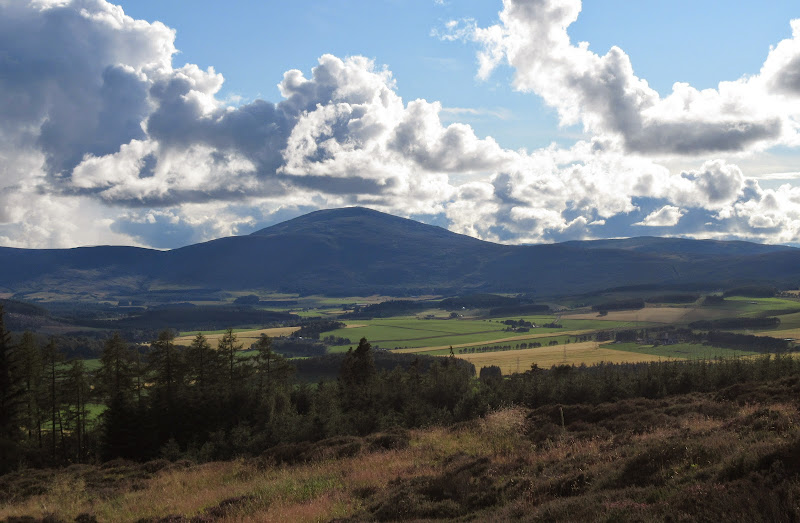 Panorama of Mount Keen to Morven: 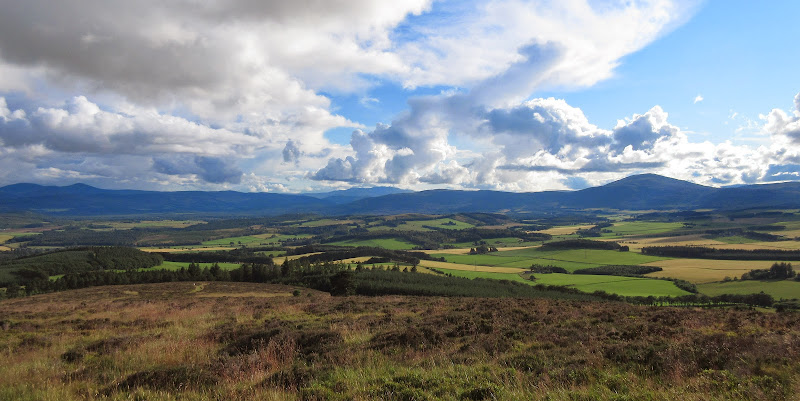 The sunshine was phenomenal after the showers, and I couldn't have asked for nicer colours. 10 minutes in and I was already enjoying myself more than yesterday!

The tracks and paths were waymarked, and the route up was pretty obvious anyway, so I didn't have to worry about getting lost or climbing any fences. Up in the woods, there was still a significant amount of runoff from the earlier rain.

Foam party in the woods: 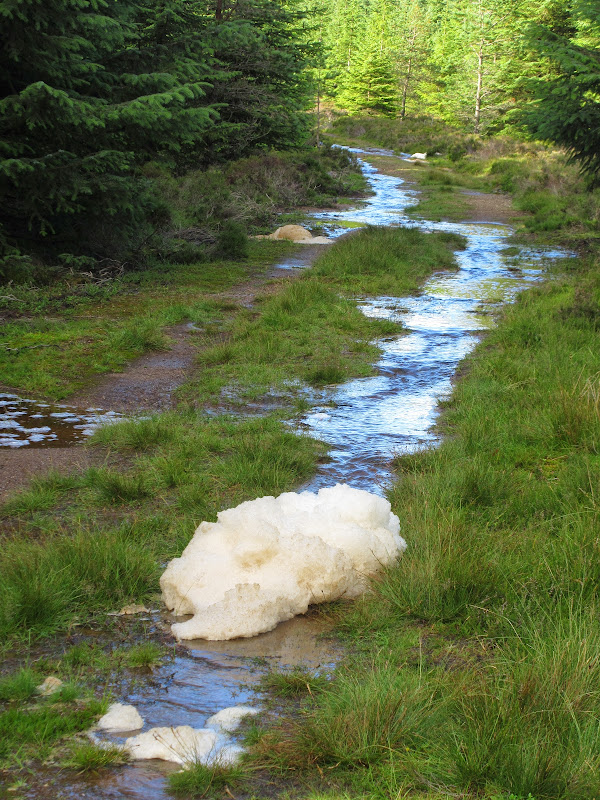 I soon broke out of the woods and climbed the path next to a monstrous new deer fence, reaching the summit approximately 45 minutes after leaving the car. 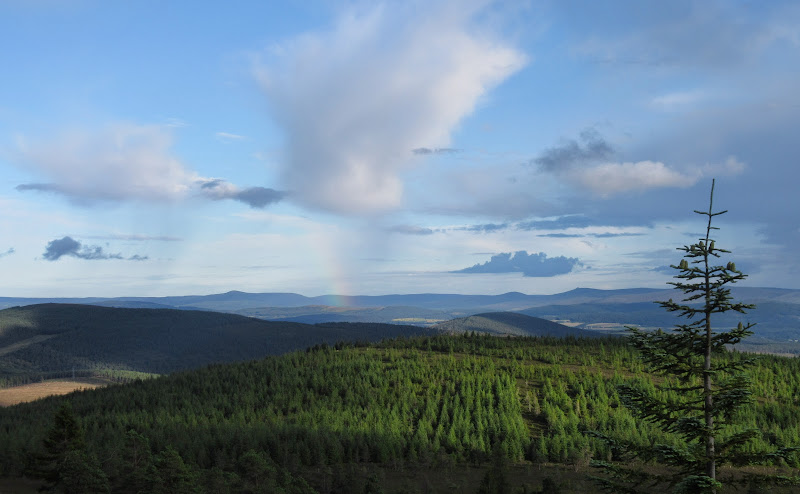 I can sometimes be a bit disappointed with these heathery Aberdeenshire summits - the views can look much the same from one to the next. Not this evening though. The combination of vivid colours and quite a number of recognizable landmarks made this one of the better viewpoints I had been up on this side of the country.

East from the summit: 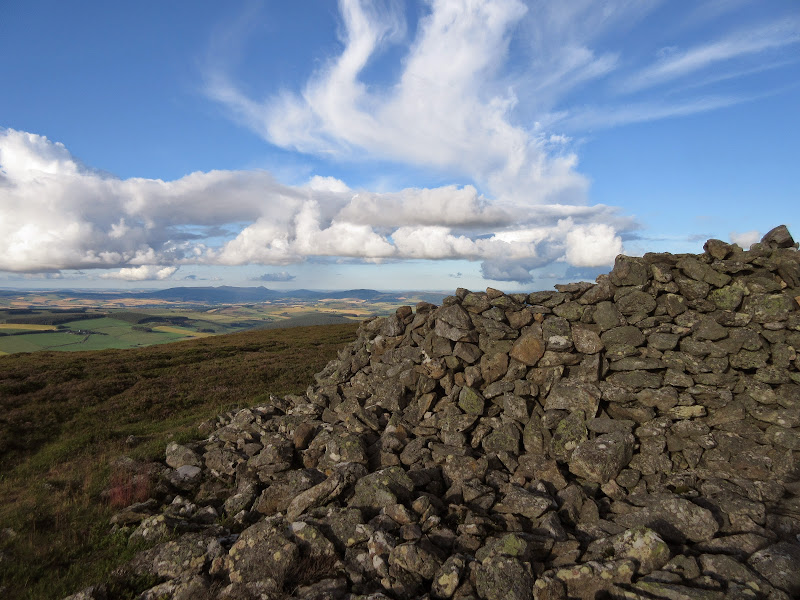 …with a zoom to Bennachie: 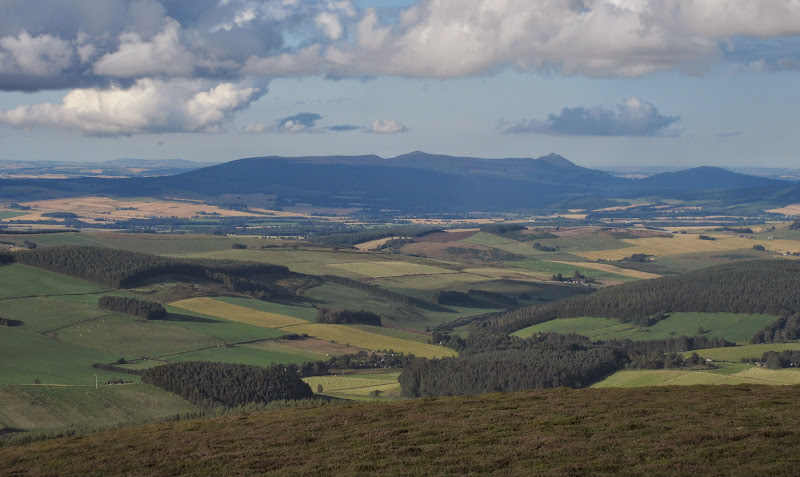 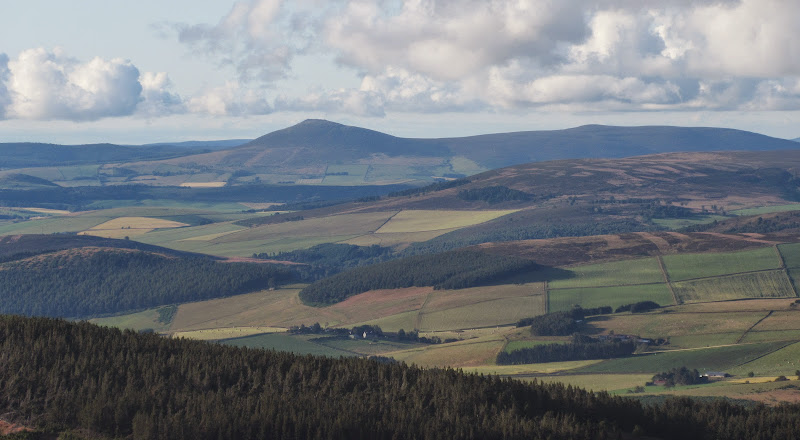 The Buck of Cabrach: 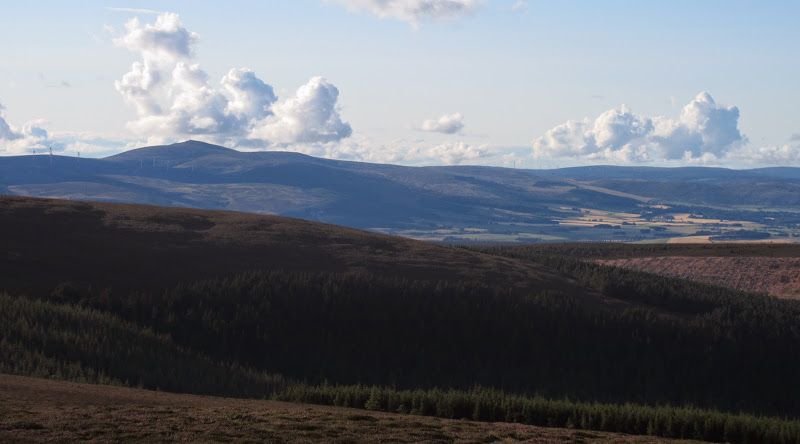 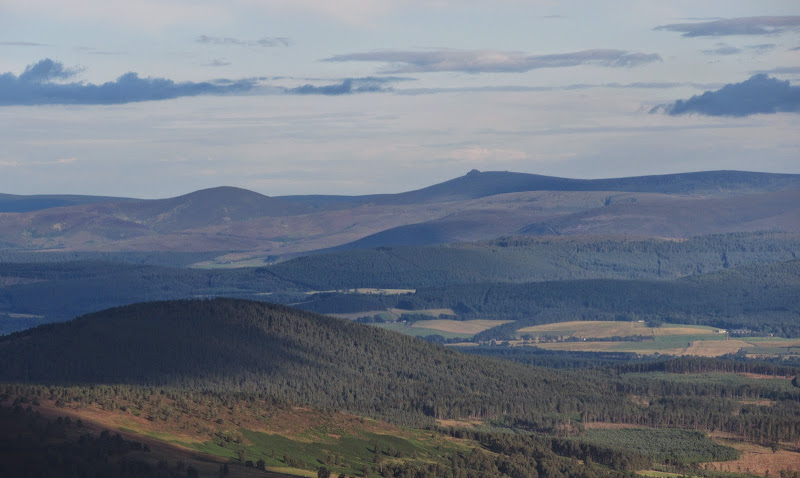 East towards Deeside and Aberdeen: 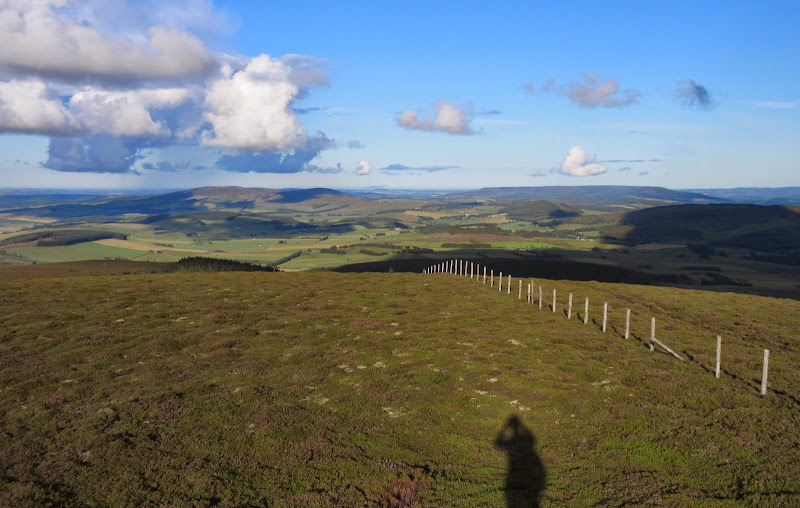 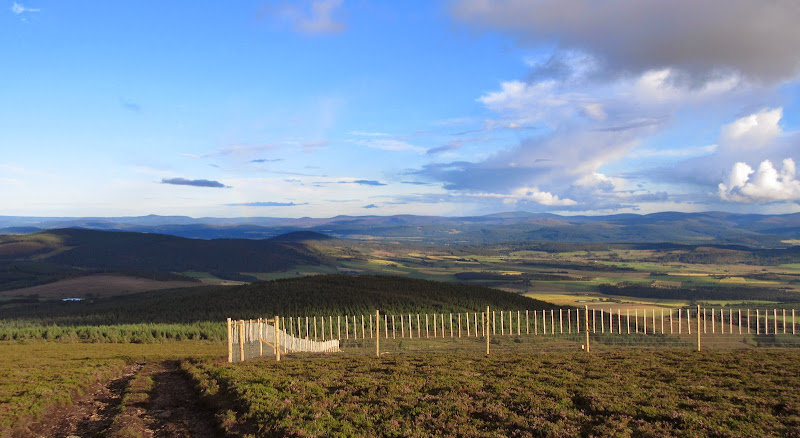 Then it was back down again, slightly faster than the ascent. I was back in the car at 8pm for a good look at the road atlas - east of the Tomintoul - Lecht - Ballater road I have only a vague idea of where I'm going. 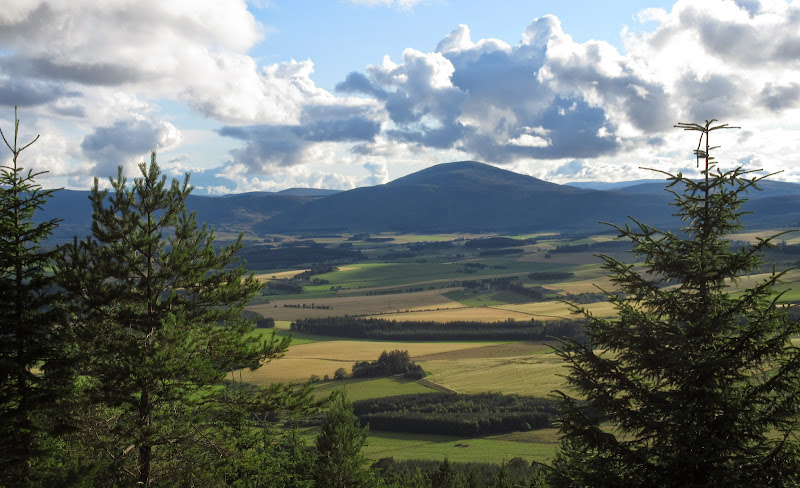 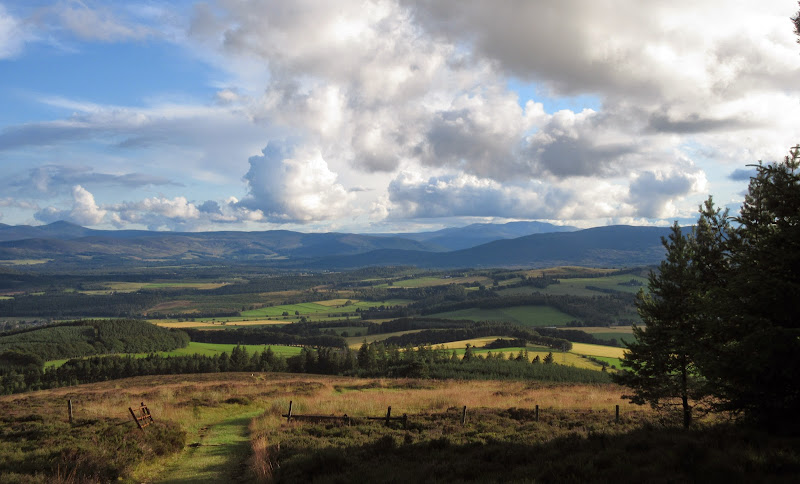 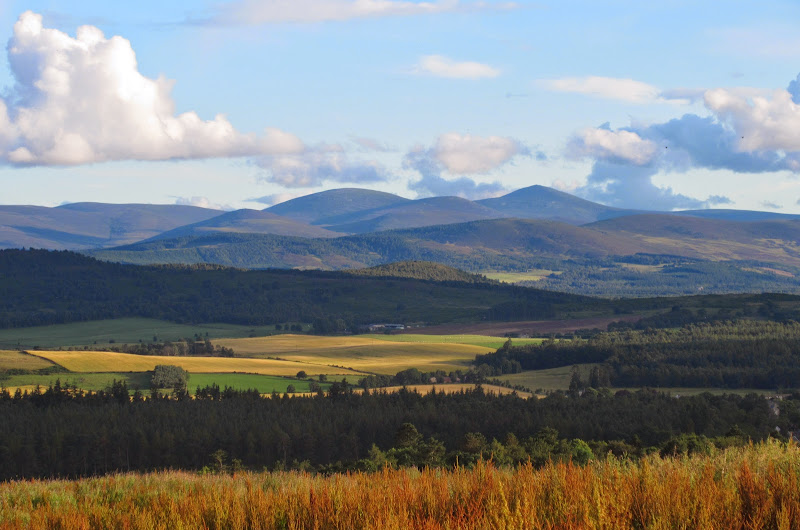 Even the drive over to the Buck was spectacular. Particularly the sun catching the tors of Bennachie above Alford, and the valley of the Don between Lord Arthur's Hill and Coiliochbhar Hill. 35 minutes later, I was parked up at the base of the Buck on the Cabrach road - this ascent looked a whole lot less enchanting than the last one!

The Buck.gpx Open full screen  NB: Walkhighlands is not responsible for the accuracy of gpx files in users posts
I somehow missed the start of the path and crashed through thick heather and bog. Once on the path, things weren't a lot better, with lots of wet bits as I crossed the slowly rising hillside. 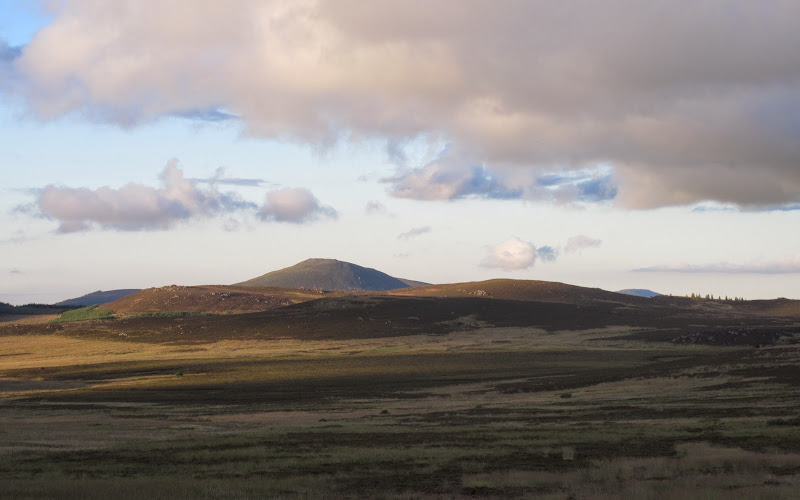 Higher up, the ground became firmer, and the summit didn't disappoint with a Ben Rinnes-like rocky outcrop on the high point. The sun was now beginning to set but it had disappeared behind a large bank of cloud. Some interesting effects. 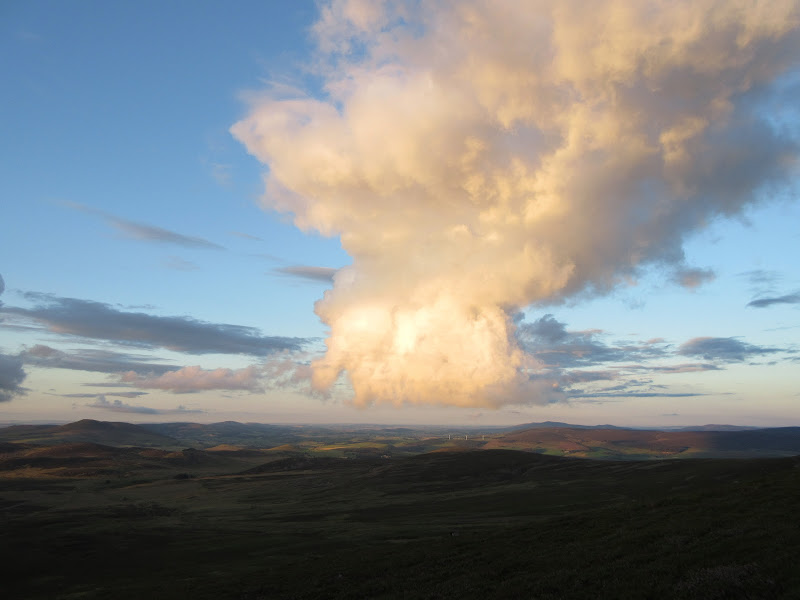 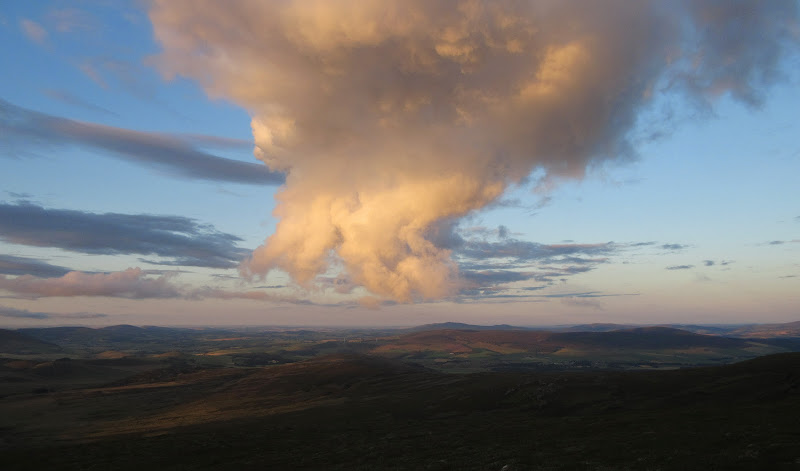 Across the Cabrach and Cook’s Cairn: 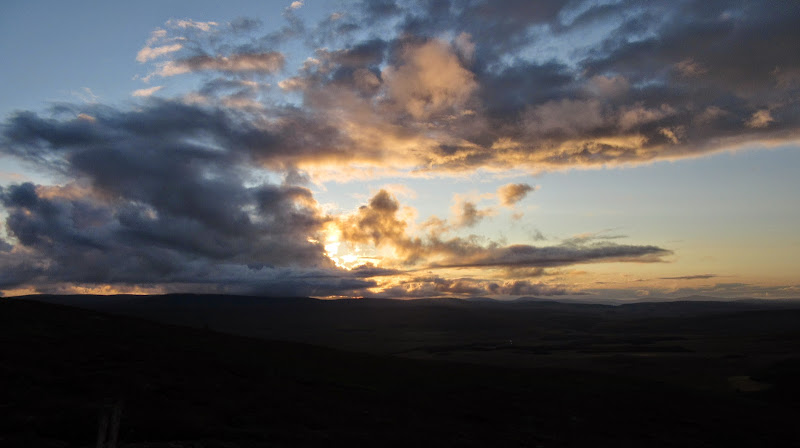 The summit was worthy of a good 10 minutes at least. The atmosphere was quite different to that on Pressendye, but just as impressive in its own bleak way.

Quite a jumble of summits around Glen Clunie: 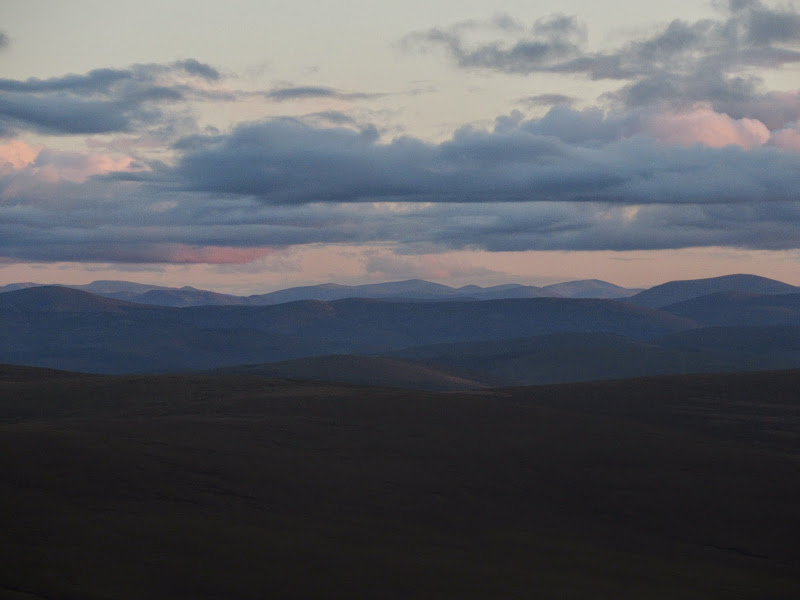 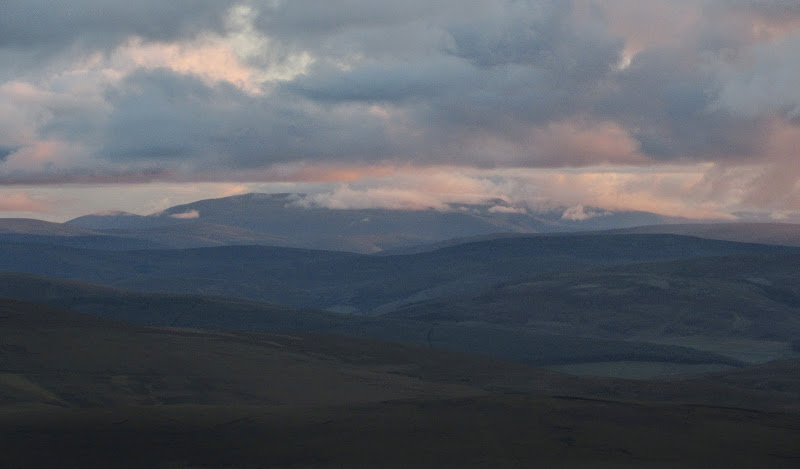 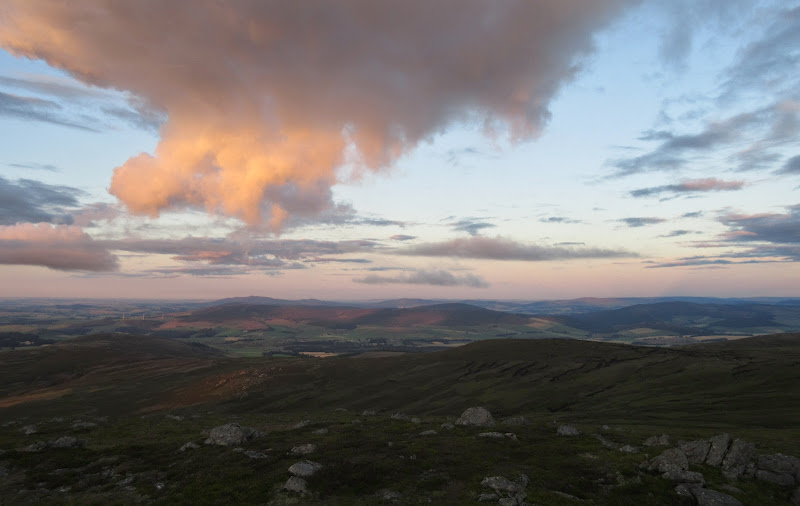 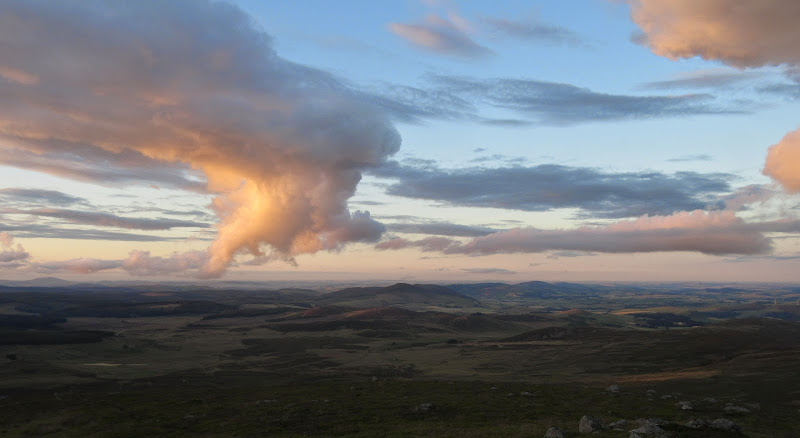 I could see the suggested SMC book traverse across to Glen Buchart - it didn't look overly exciting, crossing broad, peat-hagged hills. Maybe if it was slightly more local or covered in hard snow it might be more appealing. Anyway, it made me feel better about going up and down by the shortest route, which isn't usually my favourite way of doing things. 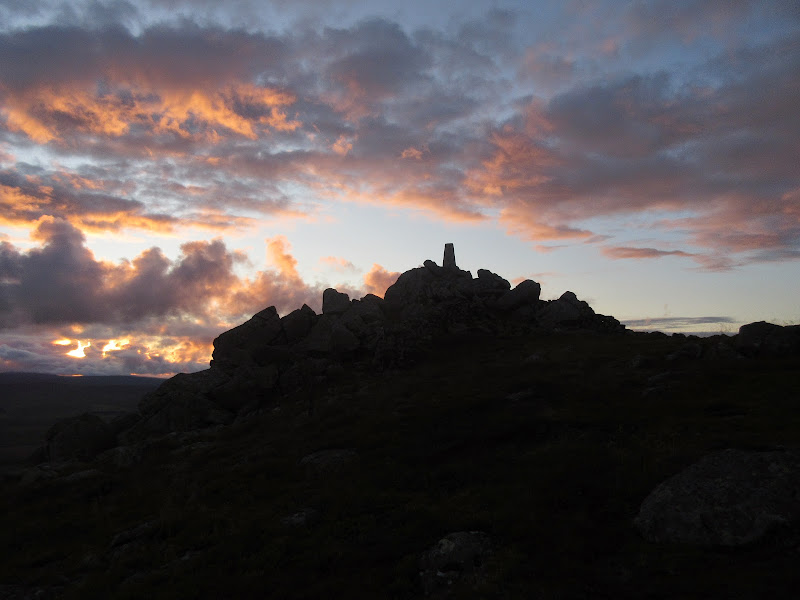 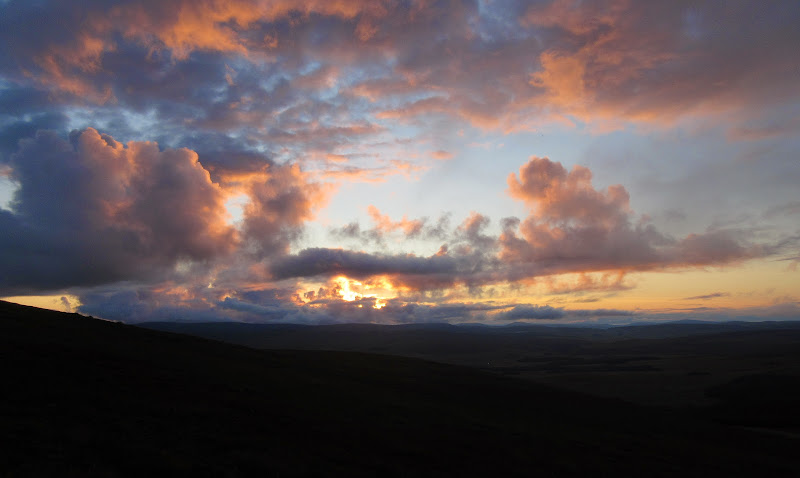 Then back down by the same route, following the path to the road this time, but not really staying any drier. Never mind - I had a much more spectacular experience on these two hills than I'd ever hoped for.

…and back to the car: 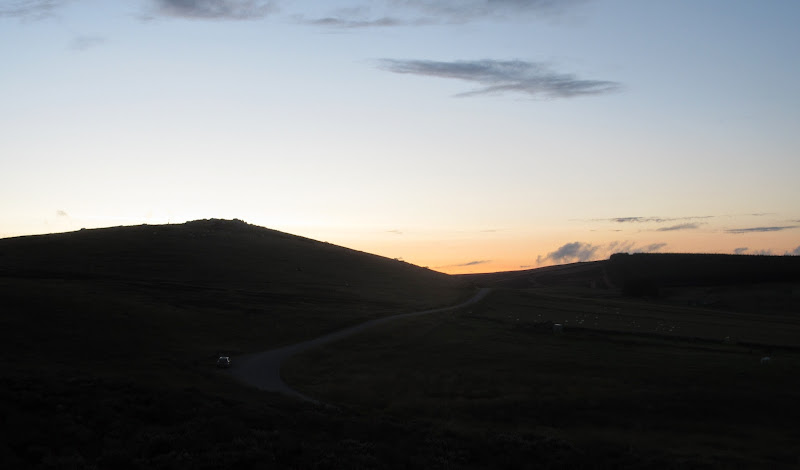 Then it was home in the twighlight. While I'd driven down via Grantown and the Lecht, the quickest way back from the Cabrach was via Dufftown and Elgin, completing a massive circuit.