My last unclimbed Corbett in the area, and I decided that rather than approach by the less interesting old Cluanie to Tomdoun road, this hill deserved an ascent of its eastern ridge. This is certainly the part which stands out impressively as you begin the drive along the side of Loch Cluanie. The main problem is that approaching from Cluanie dam leaves you with the same return route, or an awful lot of road walking/hitching.

It only took a few minutes of research to see that a decent circular route would be possible by approaching on the track which starts near Bun Loyne and follows the NW shore of Loch Loyne. The best bits of the rocky traverse could also be included from here.

I picked a pretty bad day for it, and having decided to cycle on the track to save some time, I met my first hurdle in a 2.5m high locked gate by the road. I lugged the bike over and started cycling. The track was actually pretty good, but the amount of rain overnight had made the surface wet, and I got the usual muddy splatter all over me. Even now there were intermittent showers, with the odd ray of sunshine in between, but pretty hefty looking clouds on the summits.

The track continued steeply beyond the extent shown on the map, up to a small lochan. I had abandoned my bike at the start of the steep section, so walked this bit.

From the lochan, it was possible to pick a line straight up to the 748m sopt height, but I wanted to get right onto the eastern end of the ridge at Ceann Druim na Garth-leitr. A bit of a wade through thick heather and tussocks, but it wasn't that bad. The sun even came out briefly here. 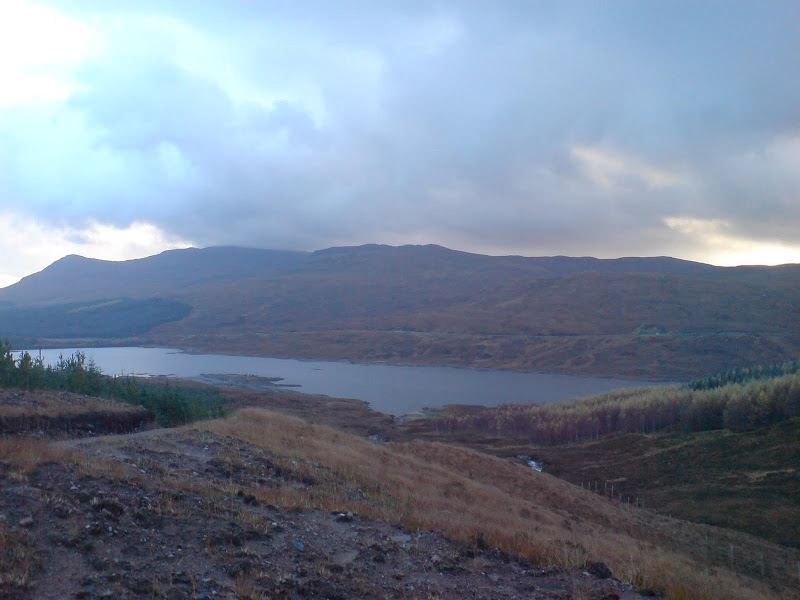 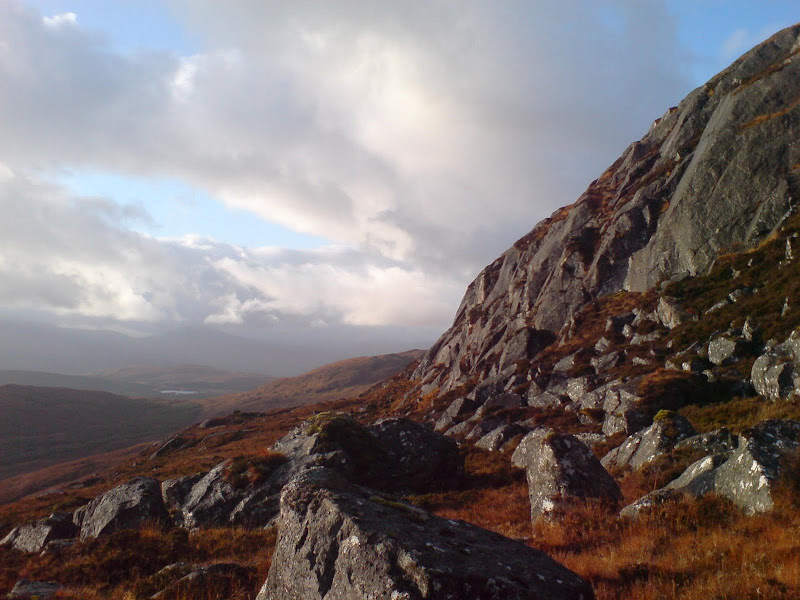 On the steeper ground, the walking was better, and there was even the occasional bit of scrambling. I missed out on most of this as the rock was wet, but you could certainly make this section quite fun. Sadly I was in the clag before long, but the walking on the flattish top was nice, mainly across slabs and boulders with the occasional small scrambly descent. This was definitely the most interesting part of the hill. The cloud wasn't completely down however, and I got a few impressive glimpses down into Loch Claunie. 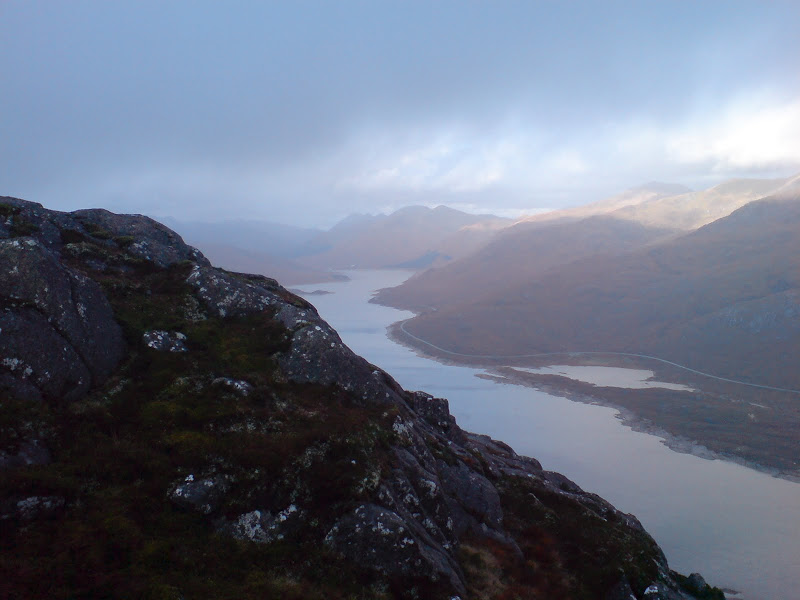 South to Loch Loyne from 748m peak of Beinn Loinne: 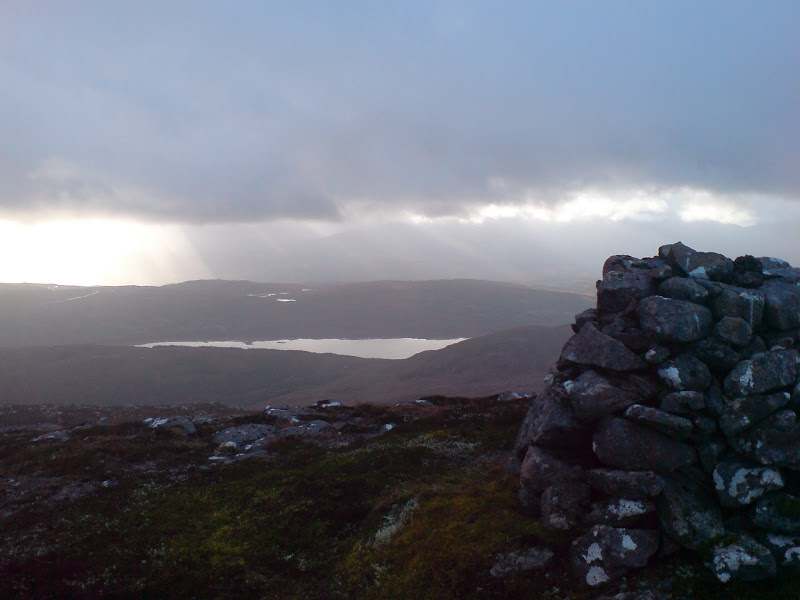 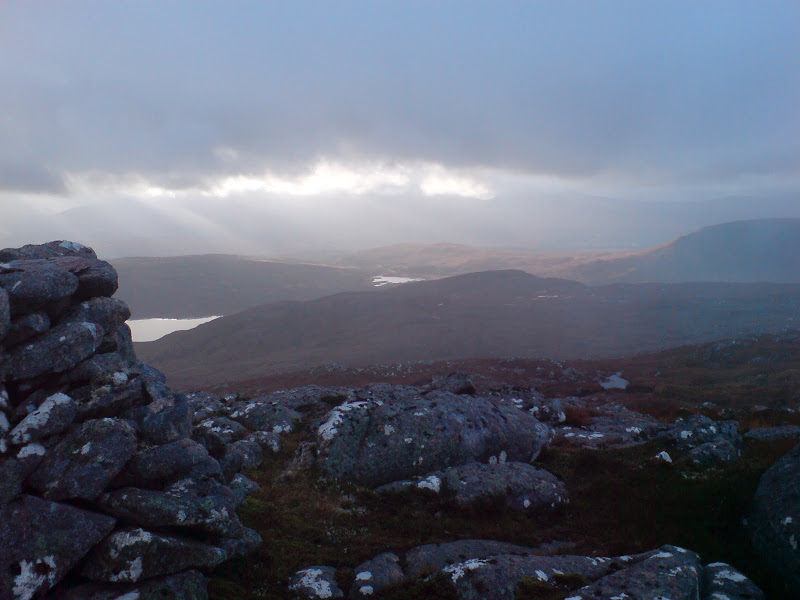 Undulaing ground took me across the 748m summit, down across a grassier area then back up to the 775m summit, which is actually what the name Beinn Loinne seems to refer to. Again, approaching this summit had some good views down gullies to Loch Cluanie and towards Glen Shiel.

Last view down Cluanie towards the Glen Shiel Munros: 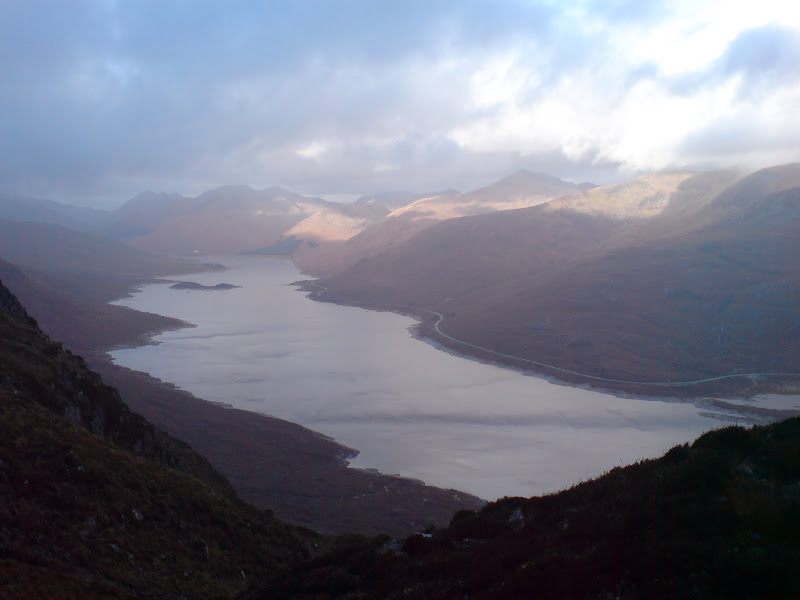 There was a bigger descent on the far side, and some more bobbly terrain. I seemed to be properly in the cloud now, so took a bearing to the trig point summit, which was the highest. I reached this before long. Unfortunately the weather took a turn for the worse on the final ascent to the summit, and stayed that way. I didn't hang around for long as I was getting battered by cold, more consistent rain.

I retraced my steps to the bobbly area, getting a bit confused, but before getting completely lost, a bearing led me down steeper slopes to Meall Coire na Creadha. I floundered a bit before picking up the Allt Coire na Creadha, and eventually emerged from the cloud. The return route to the little lochan and track head was extremely wet and rough, and not a great deal of fun. I had to climb a deer fence and flounder through thigh deep tussocks. Proper wild country! I might have enjoyed it more if the rain hadn't been hammering down, but I concluded that I would actually have been better traversing back the way I came. Got to the bike eventually, flew back down to the car, and spent the rest of the day trying to get the grit and mud off me!

In retrospect, despite the desire to find a circular route, retracing steps is probably the best route on this hill. This means it could probably be approached quite well from the Cluanie dam, which is certainly the direction it looks most interesting from.