Read all about it! 3 dead on busy Aviemore Corbett!

Read all about it! 3 dead on busy Aviemore Corbett!


The Saturday of the Nethy Bridge meet and day 4 of my tour. Friday night had passed in a blur of Trade Winds, wigs and military headwear. There didn't appear to be any great concensus about where folk were planning on walking today and in the end, I ended up scooting up the nearby Corbett of Geal Charn Mor on my Jack Jones - first time I've walked alone at a WH meet!

I had initially planned to do this walk on the Sunday of the weekend in April when a big family group had hired a holiday cottage in Aviemore, but as it turned out I got talked into going skiing that day instead and ended up spending most of the morning on my arse and most of the afternoon sitting at the snow bar next to the Ptarmigan drinking Cairngorm Gold and listening to Bob Marley and Ravi Shankar over loudspeakers. A very surreal juxtaposition indeed!

As it turned out however, I was to be far from alone on this walk today as this turned out to be the busiest walk of the last four days. I must have encountered about 15 or 20 other people either walking or cycling throughout the duration of my walk, including a couple at the summit who I spoke to for a wee while. They were on a similar meet, staying at the bunkhouse at Slochd which they heartily recommended. They went on to explain how well equipped and clean it was but then put a dampner on our prospects of ever holding a WH meet there when they explained how a sign on the door warns residents that they are "not permitted to turn up the worse of strong drink". I did however see a glimmer of hope for us and a possible loophole in this clause in the phrase "turn up". Nothing about what happens after you've turned up!

Anyway, if this hill was alive with the living, it was also alive with the deceased....... if that makes any sort of sense whatsoever! I should have expected carnage when I stepped out of the car by the entrance to the Allt na Ciche Spiritual Centre and found a dead bird lying on the verge. Death number 2 came in the form of a fairly freshly fallen sheep lying by the side of the Allt Coire na h-Uchdaich. Still thinking nothing of it, I popped off the track a wee while later into a little depression to see a man about a dog and came face to face with Death number 3 in the form of the snarling grimace and decomposing remains of some unfortunate creature who had been caught in a spring loaded trap within a crudely put together wooden box. I wouldn't have been at all surprised if the heat had gotten the better of the bird and the sheep, but this was just wanton cruelty! I rearranged the top back onto the box and overlaid it with some big rocks and continued on my way.

Fortunately I saw no further evidence of the Grim Reaper's work although when I did get back to the bunkhouse at Nethy Bridge, a few souls were hanging about the place looking more than a shade like death warmed up! Start by the Spiritual Centre Through the gate and onto the Burma Road 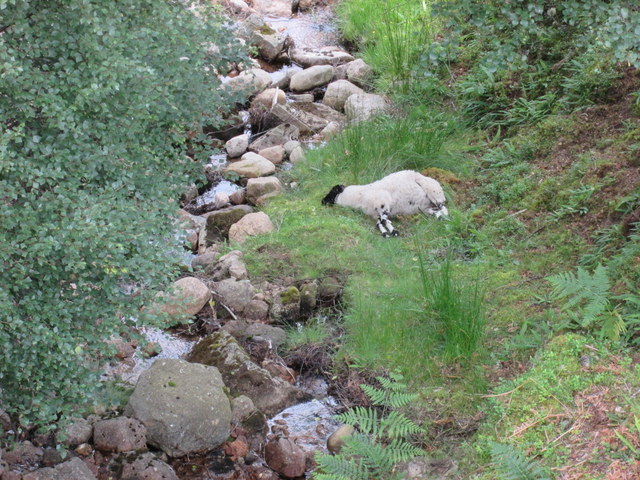 Up the motorway track Not looking so good over the Gorms 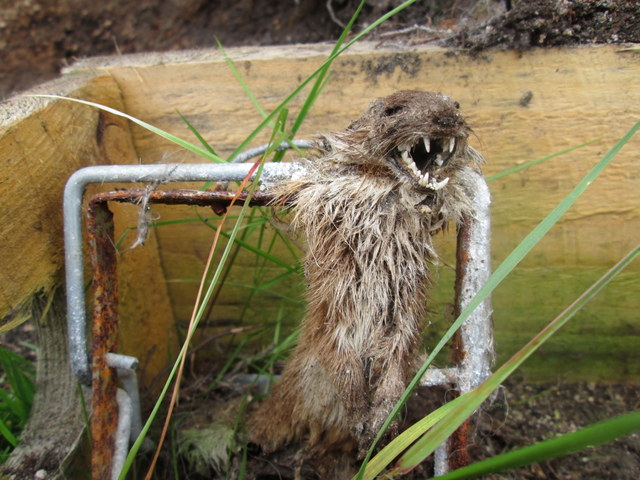 Cairn marking the path off to the summit Fourth Corbett in as many days a narly picture there of the wee creature

Thanks Murray. Aye, with teeth like that I reckoned a ferret, stoat or a weasel. Not sure what weaselmaster will make of it!

This is another of those hills I often wonder about doing on the road up to or back from a bigger hill.

Looks a bit of a dangerous place though

Jeezo No3 has a fine set of fangs on it think it ! ....may be a stoat , keepers persecute them as they take grouse chicks eggs and other cratur's that only the wealthy and ignorant are supposed to shoot purely for pleasure of course / If you see them spring em and burst the boxes

good stuff, Graeme - was lucky enough not to see carnage like this when up here (maybe 'cos I was too busy trying not to fall off the bike

Not the sort of gentle hill to expect death and carnage on!