Last of the summer Cairngorms

Last of the summer Cairngorms


Summer for some doesn't even begin until the 1st June, but the last day of May was the last chance for us to get out into the Cairngorms before moving across the country from Aberdeen to Glasgow for a new job. By chance, my brother had suggested joining us for a walk (a rare occasion) and a friend was up visiting from London, so four of us rather than the usual two set off after the Aberdeen rush hour, west into the hills.

So where to take two people who were new to walking in Scotland? Somewhere remote, dramatic and scenic perhaps - plenty of places to choose from. But in the end we decided on the Cairnwell Munros - hardly at the top of the list for undeveloped wilderness, but it was a walk none of us had done before, and selfishness won out: we didn't want to go somewhere we'd already been!


cairnwell.gpx Open full screen  NB: Walkhighlands is not responsible for the accuracy of gpx files in users posts

A remote walk often gives the best chances of solitude and abundant wildlife, but the Cairngorms are hardly central London in terms of crowds - in fact, we only saw a couple of other groups of walkers all day. Even before leaving the car park, several red deer emerged from the gully behind the ski centre ticket office. The ascent to Carn Aosda features a good, stony track right to the very top. Fairly common for the Cairngorms, but the ski lift running alongside certainly wasn't! Looking back revealed decent-sized snow patches on the slopes of Glas Maol - excellent lift-served skiing here in the winter months. Time for a brotherly photo: 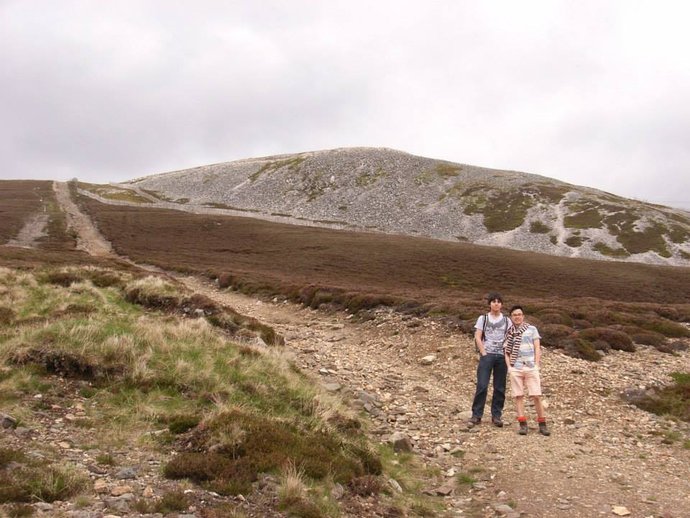 In no time at all we were at the top. Someone kindly took our photo: of two of us on our 18th Munro, two of us on their first. Perhaps my brother will catch the bug? It was overcast at this stage of the day, but the cloud stayed above the tops looking towards the Cairngorm plateau. Someone had evidently rebuilt the cairn since the last storm: The walk to Carn a' Gheoidh is an interesting one - very little ascent until the last bit, and a curious mix of pathless ground, stony path, boggy sections, snow patches and even signposted ski runs to follow... Loch Vrotachan sneaks into the scene: Rejoining a clear path near the 808m spot point, we came across one of the worst nesting sites for a ptarmigan I've ever seen (and my brother and our friend's first ptarmigan) - right in the middle of the path, looking as vulnerable as can be. Given how popular a walk the Cairnwell Munros are, its chances of an uninterrupted stay looked slim. As the ridge curved southwards, the Cairnwell stood out on the horizon. We stopped for lunch near the stoney hump of Carn nan Sac, overlooking a large snow patch, and the Cairnwell beyond the deep cleft created by Allt a' Choire Dhirich. Almost immediately after getting up from lunch, my brother jumped back with an exclamation of surprise. He'd been inches away from putting his foot down on top of a nesting ptarmigan. It had found a much better place to nest than the other one (despite nearly being stepped on), perfectly camouflaged against the heather and rock. From here we the path reappeared and we continued to Carn a' Gheoidh, with a steepish final haul to the summit, taking extra care not to step on random nesting birds. The summit is about as far west a viewpoint you can get in the southern Cairngorms without a very long walk indeed, and the views featured a few unfamiliar summits. On the way back down we couldn't resist a bit of rucksack-sledging. As usual this was fun but fairly unsuccessful, resulting in wet trousers and crushed Kettle Chips... More lovely view over the deep valley to the south on the way back. The ptarmigan-on-the-path was no longer there when we passed the same spot - only a pile of scuffed sandy earth as evidence. We'd seen a couple of dogs pass the spot earlier, so this was no surprise. Hopefully it found a better spot.

At the 808m spot height we kept right and ascended a narrow, scrambly path across the northwest face of the Cairnwell - easier options are available. The Cairnwell is firmly back in scarred-by-ski-developments territory, but I'd argue that these only affect a very few summits in Scotland (unlike the Alps), and as such, offer something fairly unique which brings the mountains closer to a wider audience. It's definitely not the prettiest summit, but there aren't many places where you can get photos like this anyway... 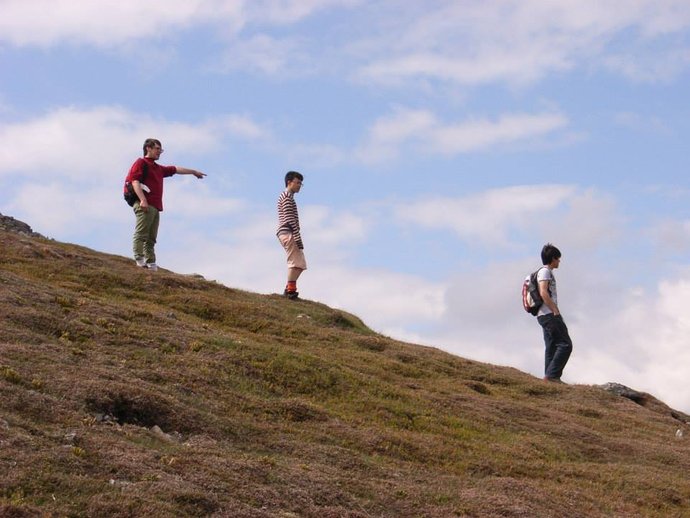 It was a case of whichever route you fancy back down the grass and heather to the ski centre - occasionally rocky, occasionally boggy at the bottom. On the home straight, the sun finally broke through more widely, giving us good memories to take back to Aberdeen, and to Glasgow - our future walking base! 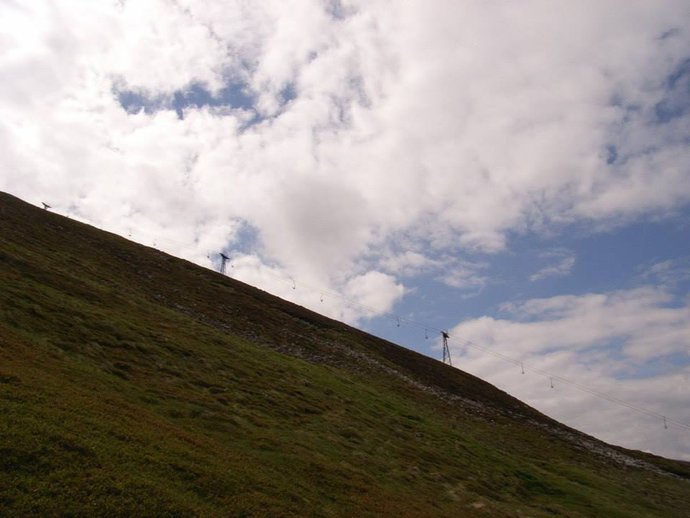