Setting off from Inverness, with my lovely friend Kay and her grandson, Aiden. The weather forecast was to be sunny intervals, and hopefully we would be granted more than that.

This was a walk that I drove past on many an early summer morning a few years ago , when I was on my way to Skye , when I was managing the building the new Portree High School, and many a winter morning too, always concious of the sudden appearance of a darting doe deer at any minute. During my journeys then, I manged to avoid many , but unfortuneately battered three of them over the period.

We set off on the long path up Glen Torridon, not many others around, except three keen young cyclists, who I took it were not ascending the mountain, at least, if they did, they never came back down!

At Coire Fionnaraich there were a troop of campers and bothy dwellers, who were considering there ascent of the day whilst reflecting on their antics of the night before.

Young Aiden informed that this part of the Torridon Glen was known as 'Happy Bumland', yep, hard to believe but there you are.
Clach nan Con-fionn soon came into view and photos were duly taken, before the stalkers path veered sharply left to the ascent. It was very 'close' on the way up with an inkling of heat coming from a vague sun .
The surrounding landscape was magnificent, a dynamic that never fails in this part of the world.

The stone staccato turrets, with their variable reds and pinks jutted everywhere. This is my favourite mountai nlandscape, I got energised from the quartzite in the multi-monolithic playground.
Young Aiden talked and talked , which was brilliant, but that was after an initial annoyance when I realised I wasn't going to get a word in edgeways. And I can talk too! I did manage to relate to Aiden , the legend of the kelpie, which was good , and Aiden was fortunate to hear the chilling call of the Kelpie, which he agreed was very much similar to the sound of the human male passing wind!

Then there was the appearance of the Rock Ptarmigan and the croak that the made, which is a unique sound, hearing it before you see them.
Then the mist came and engulfed us suddenly, and all views were off the map, and the swirl followed us until we quickly got ourselves off. 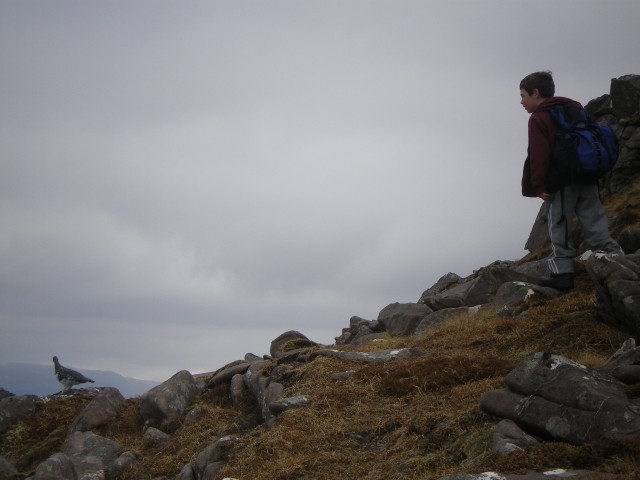 The walk back off resulted in a good drenching, which was a scunner, but young Aiden showed me and Kay that he had the mettle to handle the blustering wind and rain and, probably much more in the future.

Kids are pretty tough that's for sure - my parents used to drag me and my brother all over the Lakes, Wales and the Isle of Man. We were pretty lucky but I'm not sure we appreciated it at the time... The lad looks to have had a good time though...

He certainly did my friend? And made it enjoyable for all

It is a difficult area to handle when taking little chaps out into the hills. On reflection I think maybe I pushed it too much...we always, at that time, had our holiday in July and in the North. Typical comments from M were 'oh no not those gloomy mountains again'. M realised that we were not going to do other things during the holidays so she arranged her own escape....helping out with the rough tasks at the stables in Glen Feshie which continued throughout her schooldays. Come her time at university in Glasgow with each year end finishing with a long distance trek with her friends...typically Skye to Crieff on an old cattle route, WHW etc. Nowadays in Canada she ascends whatever mountain she can reach usually with skis and does some ski instruction in winter.....her summer job this summer is working with a horse trekking company doing multi day treks through the Rockies. I guess that the seeds must have been sown. 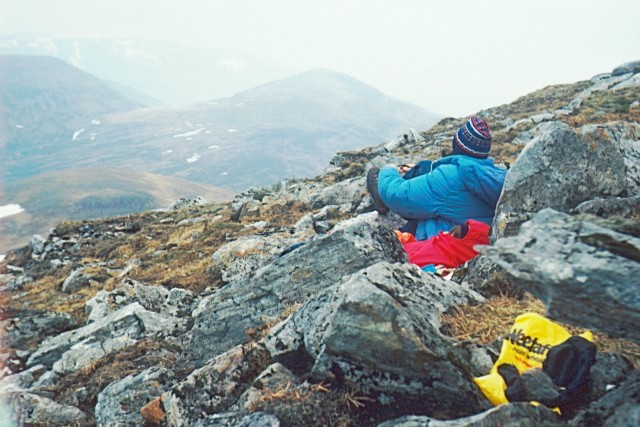 setting out for Barrisdale from Kinlochhourn complete with drawing books and 'Blanco the bear'.

I always used to escape my parents to work at the nearest riding stable or borrow the nearest farmer's horse to take out riding... it was more that I was totally into horses than trying to get out of the walking - honest!

It's funny, I never suspected Gaffr as being the age he/she obviously is - or the gender!

if this route dog friendlny

Could you post a link to your daughter's horse trekking company? The missus and me were planning on something like this next year