Bridge of Cally to Spittal of Glenshee

A few months ago I had suggested to Debbie that we do a long distance route during the summer holidays. Together we had done the Crianlarich to Kinlochleven part of the WHW many years ago (we're probably talking 12 years ago or so) and for this summer I had suggested the East Highland Way or the Great Glen Way. However, Debbie fancied doing the Cateran Trail on the grounds that it was a bit more local.

We bought the map, read up on line and booked accomodation over three nights at Spittal of Glenshee, Kirkton of Glenisla and Alyth. The plan was to drive to Blairgowrie where we would leave the car and catch the bus up to Bridge of Cally before walking for four days back to Blair.

So, with Ailsa dispatched to Debbie's mum and Lucy with my parents, we set off on a glorious morning to Blairgowrie. By the time we were kitted up and walking away from Bridge of Cally, it was only 9.30 but already it was promising to be a scorcher.

We were booked into the Gulabin Lodge that night and with no bar facilities on site or nearby, my only prospect of a cold pint today would be at the Kirkmichael Hotel. However, an inexplicable navigational malfunction around Woodhill resulted in us taking a route that lead us up onto high ground towards Loch Charles (yes, how can you get lost on a waymarked trail carrying a waymarked map?) and the resulting faff while I tried to extricate ourselves from the situation and simultaneously disregard most of the comments being made by Debbie, probably cost us over an hour before we were safely back on track. Really not the best use of time and energy on a day like today!

The upshot of all of this was that it was 2.30 by the time we arrived in Kirkmichael. I had thought the atmosphere couldn't have grown any more tense, but then we discovered that the pub was shut for the afternoon and would not reopen until 5 o'clock! A sandwich and a can of juice from the village shop was not really what I'd had in mind for lunch today!

With the heat showing no sign of relenting, we carried on past Enochdu and then out onto the high open moor past the Lunch Hut before the long haul up to the col above the Spittal of Glenshee. A quick stop at the bird poo spattered Lunch Hut confirmed what Seanna and Dougie had said about this not being the sort of place you'd ideally want to spend the night!

The sign at the col claiming it was only 20 minutes to the Spittal was a psychological boost, albeit an entirely false claim. However, we soon limped onto the tarmac and after a quick check to confirm that the pub was still shut for renovations work, we headed round to Gulabin Lodge which tonight was a stronghold of German and Dutch travellers, and after a welcome shower and change of clothes, sat out on the decking to share a nice bottle of red along with our dinner. 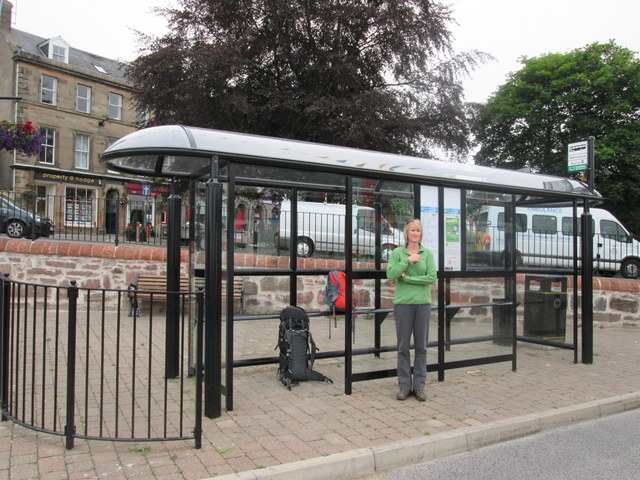 Waiting for the bus in Blair Too early for a swift pint at Bridge of Cally Really not sure why I had long trousers on today! Leaving the forestry behind Too high - but nice views across to Mount Blair Crossing the stream just before the lochan south of Dalvey This'll have to do! A poor substitute for the beer garden of the Kirkmichael Hotel! A breather behind Loch Cottage Over the Ardle via Kindrogan Bridge 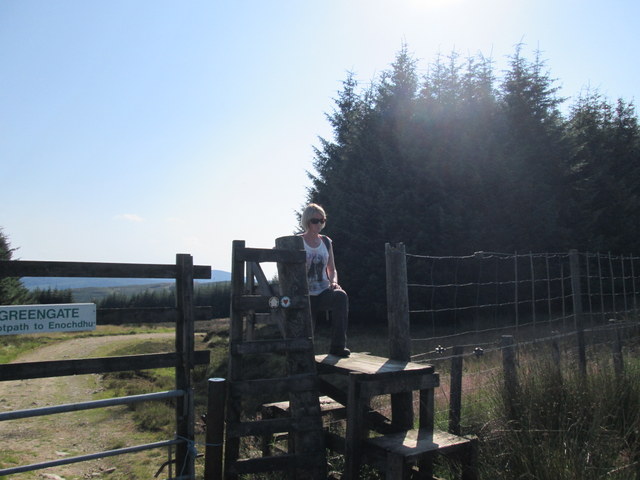 More of a sense of remoteness now Be careful where you sit Debs! Descent to the Spittal I can see the accommodation from here! Ben Gulabin from outside the hostel

Brave man Graeme, leaving the car in Blair for 3 days

I had never heard of Loch Charles before so had to look it up on the map, how the hell - no forget that, who am I to talk about getting lost (pot and kettle).

Looking forward to your reports on Days 2 and 3 (just to see the route you took).

PS why skip the first 4 mile to Bridge of Cally?

I had never heard of Loch Charles before so had to look it up on the map, how the hell - no forget that, who am I to talk about getting lost (pot and kettle).

Looking forward to your reports on Days 2 and 3 (just to see the route you took).

PS why skip the first 4 mile to Bridge of Cally?

Aye, having taught at the High School in Blair for a year, I know it's a risky business. Amazed it wasnae on bricks when we got back!

I think what got us lost was that we had stopped just before the picture with the signpost showing distances to BoC and Kirkmichael, then the fact that I stopped to take a picture of this signpost. Just took my eyes off the ball. The junction is obviously a tricky one anyway because we just blindly followed a good path that took us past the ruin with the views over to Mount Blair. Again, this probably distracted me from the fact that we had gained a bit of height. Add that to the fact that I wasn't actually carrying the OS sheet, only the published CT route map on 1:40000, and the fact that I wasn't consulting it as regularly as perhaps I should have been, and we eventually found ourselves at a gate on open moorland with a light bulb suddenly coming on! Of course I then went and confounded matters by trying to take a cross country route back down that landed us in all sorts of bother. Should just have retraced our steps.

As for the start, we didn't fancy doing the Blair-BoC section twice (and quite unnecessarily as far as I can see) so the idea was to start walking from BoC and finish in Blair.