A target for this autumn was to do the remaining Corbetts in the Ullapool to Strath Oykel area, providing some walks not too far from home. Carn Ban sits way out in the middle of nowhere, difficult to get to from all angles...unless you have a bike! Cycling offered two good approaches - from Alladale in the east and from Black Bridge in the south. I had previously cycled from Black Bridge to get to Beinn a Chaisteal, so knew it was a decent track. Also it was only 35 minutes from home.


our_route.gpx Open full screen  NB: Walkhighlands is not responsible for the accuracy of gpx files in users posts
Having had an autumnal but stunning day out in Glen Shiel a couple of days before, I was all set to visit the Pait/Attadale trio of Corbetts today, but the weather made me re-think. East looked better, so I was on my bike at 8.30ish heading for Loch Vaich. Tarmac took me almost to the lodge, where I forked off right onto the Strath Vaich track. There were regular showers, but the sun in between made for some intermittently nice views. The wind was gusting, sometimes against me, sometimes not.

Loch Vaich from the track: 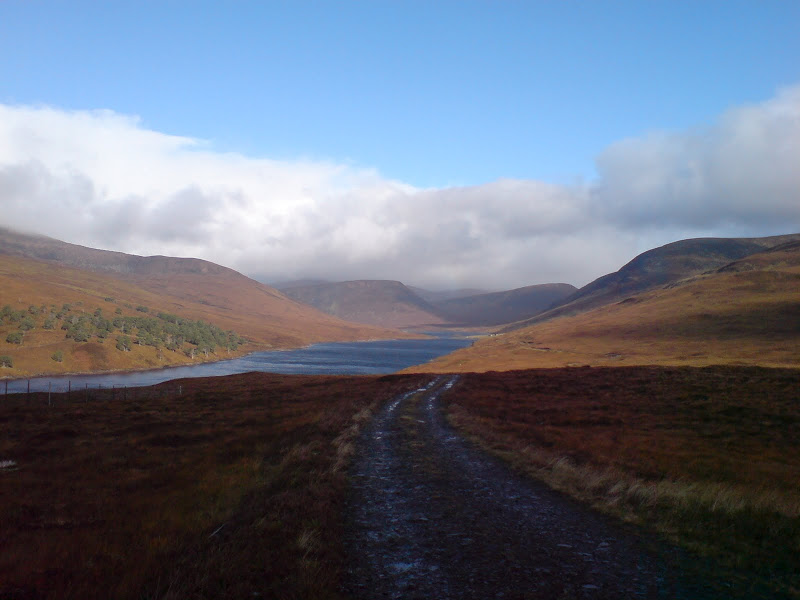 Looking across Loch Vaich to Am Faochgach and Carn Gorm-loch: 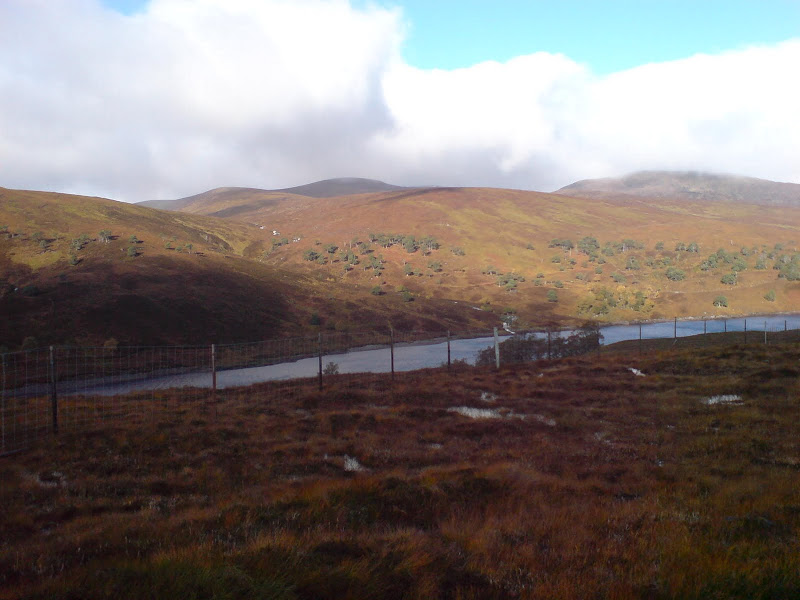 I passed the extent of my previous travels and crossed the col next to Meall a'Chaorainn. I had plans to climb this on the way back, but thought I'd see what the weather was like later. Once round the corner into Gleann Beag, the full fury of the wind hit me in the face, soaking me. Cycling downhill became more difficult than getting to the highpoint had been.

Down Gleann Beag towards Deanich Lodge: 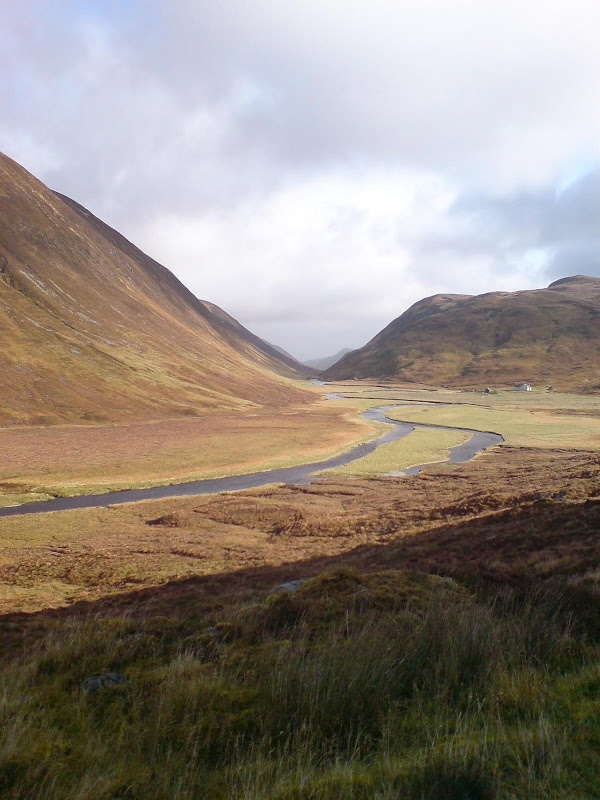 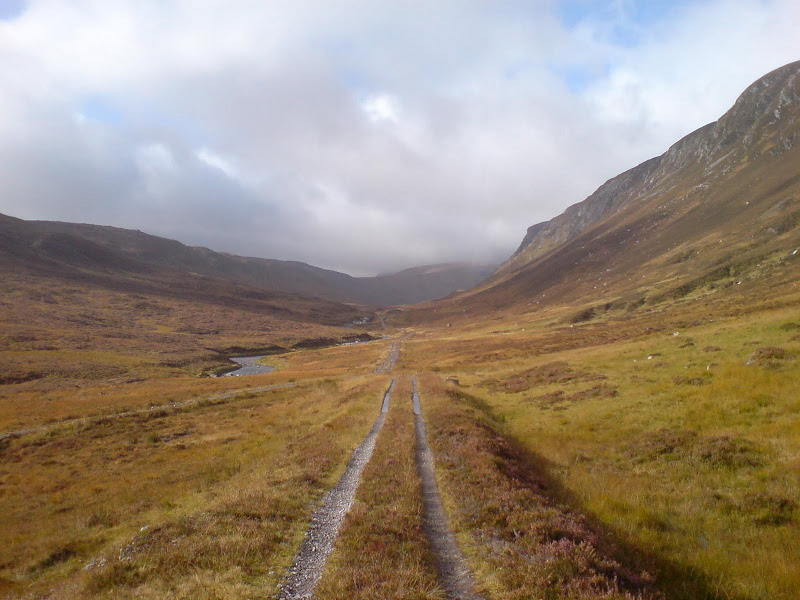 Finally I was at my starting point, a track junction with a hydro intake on the Allt Bheargais. I zigzagged up to the intake then followed the fainter stalker's path above, passing an impressive waterfall. The sun was out briefly at this point but it was the last view of the walk. I abandoned my original plan to walk over to Bodach Beag and along the craggy northern corries, and made a line for the SE ridge instead. 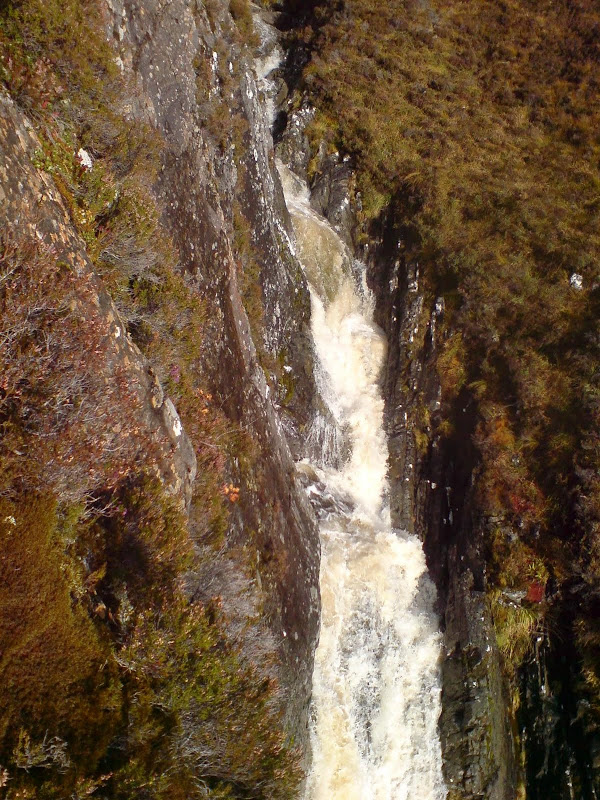 The waterfall showing the hydro intake: 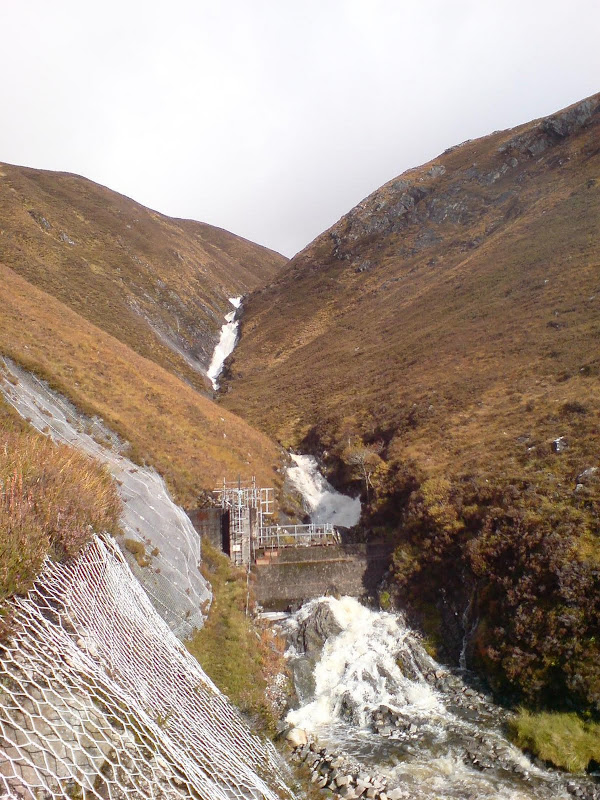 Last view up Glean Beag from the northern slopes: 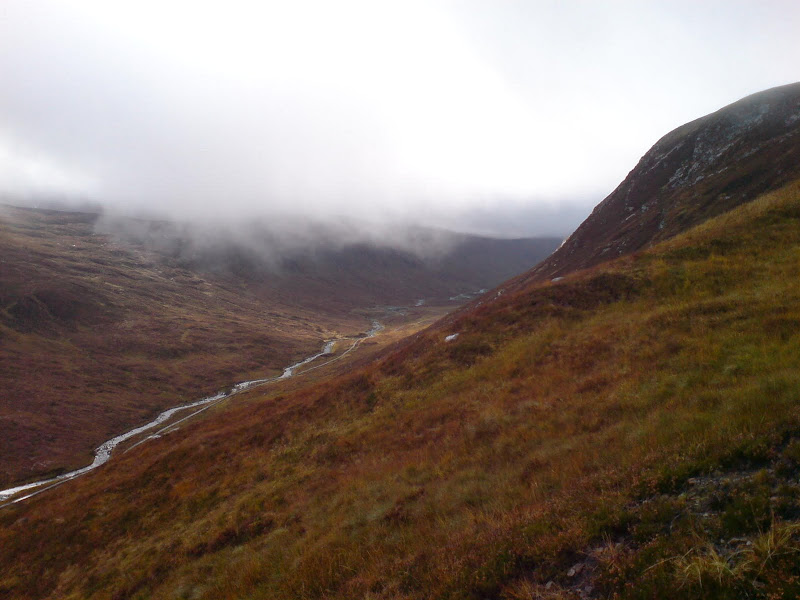 The route up the corrie was squelchy and peaty, but the ridge was a little firmer. Typically I was walking gradually into worse weather without really noticing, trotting along in my shorts. It was only when the ground started to level out that the full effect of the windy wetness was noticable. I found a cairn but decided to head north to the edge of the corrie to confirm my position in the pea soup. The corrie was in the right place, but there was little to see looking into the void. A shame, as this should be a magnificent grandstand for viewing the north.

I trusted my wits to find my way south, drifting off track slightly before correcting myself and crossing the south summit. I carried on south towards Loch Sruban Mor, but decided to take shortest route back due to weather. I crashed around a rocky, peaty area above Cail Mhor, eventually finding some cairns leading me to the stalkers path I had started out on. This goes further than the map shows. Finally back out of the cloud, I dragged my sodden body to the bike.

...and first view after re-emerging from the cloud. My next hill, Meall a Chaoruinn: 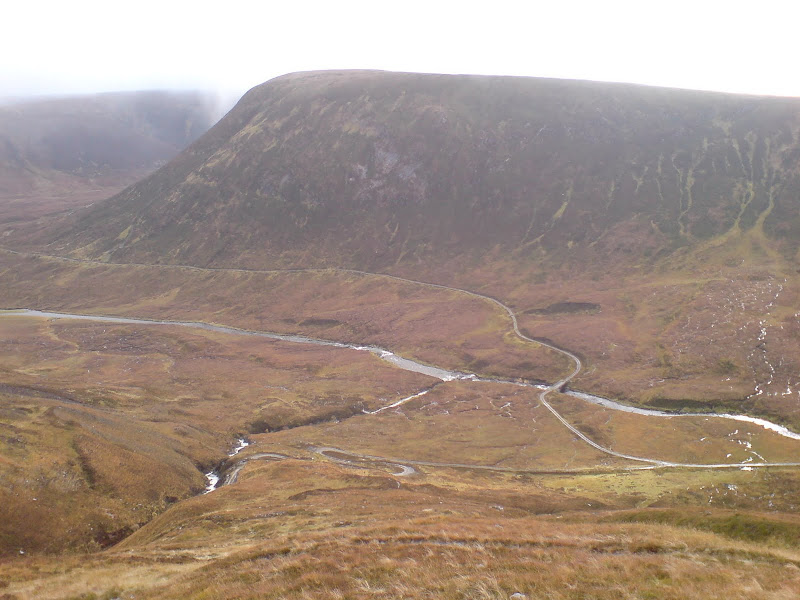 Of course the sun popped out here, and the wind was behind me going back up to 350m col on the bike. This was exhilirating enough to make me think that bagging Meall a'Chaorainn would be a good idea after all. This didn't take long (35 min away from bike) but was ridiculously steep and slippy. The cloud came in at summit, meaning no real views here either. Again there were some nice sunny spells as I pedalled back down the side of Loch Vaich.

Halfway up Meall a Chaoruinn, looking to Loch Vaich: 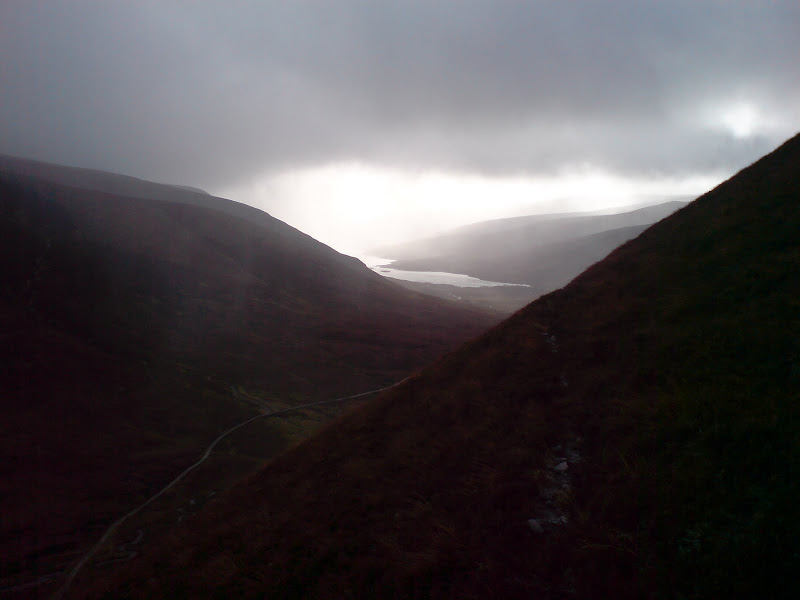 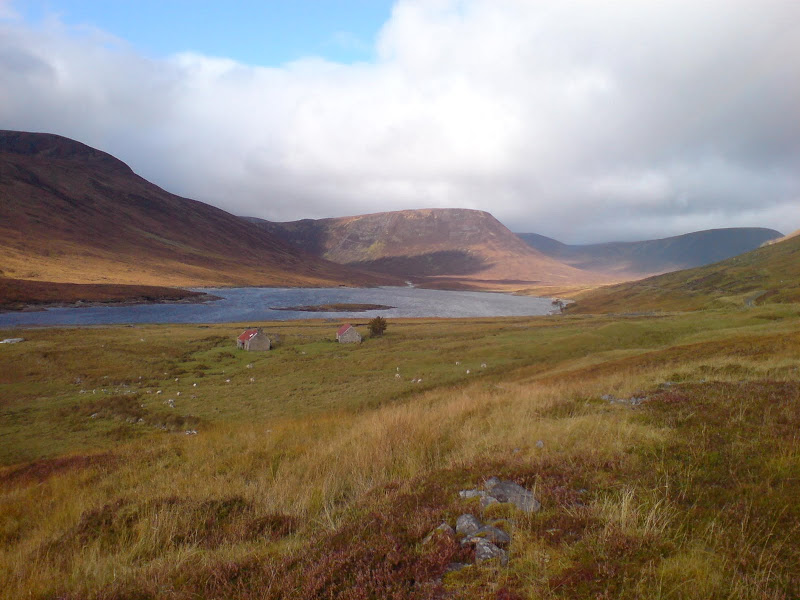 I was a complete drowned rat back at car, and caked in mud and grit. The bike doesn't half fling a load of shite all over you in this weather! Autumn 2009 was to be very wet for me, even though everyone else seemed to find pretty decent conditions.