The big debate: east versus west on Ben Ime

The big debate: east versus west on Ben Ime


Since I moved from London to Aberdeen three years ago, the vast majority of my walking has been in the Cairngorms due to its shorter driving time from the east coast. At first, the rounded, heathery hills didn't appeal to me as much as the rugged detail of the Lake District where I'd spent holidays in my childhood. But opinions change over time, and the Cairngorms grew on me. Their appeal is different: their sense of space, and scale not seeing another person all day, ptarmigans and grouse, mountain hares, snow patches, and countless other things.

But moving to Glasgow this July has brought a different beast into range - the West Highlands. Of course I knew about the differences from following websites such as this one, but it was going to be interesting to immerse myself in the other side of Scotland: fewer than fifty miles away from the Cairngorms, but completely contrasting in character. And inevitably comparisons were going to be made.


beinn-ime.gpx Open full screen  NB: Walkhighlands is not responsible for the accuracy of gpx files in users posts

My partner and I chose Beinn Narnain and Ime for our first walk, as it seemed to have all the things a typical west highland walk should include. Rush hour was another new thing to consider - it never affected us in our part of Aberdeen, where in ten minutes you could be driving at 60mph through the rolling foothills on Deeside. Motorways were a luxury though, and wide roads all the way into the National Park which begins surprisingly close to the city outskirts. And an abundance of cheap petrol!

Being a weekday the car park had plenty of spaces, but with about twenty cars parked this was already a busier start to the walk than any in the Cairngorms - even Lochnagar. Most of the walker traffic would be heading for the Cobbler though. Crossing the road and heading up the track, we branched right too early onto a narrow path which soon fizzled out in a mass of brambles and bushes. Not the most auspicious of starts to our west highlands "career". The correct path lay a little further up the track, immediately running in a fairly direct line up the fall line. The Cairngorms are rarely this steep, and when they are, the tracks or stalkers paths you're following tend to contour around the mountain or zigzag up more gradually.

The upshot was that height was gained quickly, and with height the views improved. It was hot, but not unbearably so, with a reasonable breeze. Road noise was an unfamiliar and unwelcome addition to this part of the walk, but Loch Long looked enticing and perfectly calm in the hazy morning sunshine. Large water bodies are few and far between in the east, especially on Deeside. Picturesque villages at the start of mountain walks are even rarer, so looking back on sleepy Arrochar was a nice change. The path was narrow, uneven, overgrown and wet, although interesting to follow, and the variation underfoot takes your mind off the effort of ascent. It did have a bit of a stream flowing down it - there was infinitely more water around compared to the Cairngorms, even during a relatively dry summer spell. Steep terrain and wet ground were two changes which didn't come as a surprise, but the change in wildlife was unexpected. Your friends in the Cairngorms are likely to be grouse, deer and mountain hares. We didn't see any of these today, but instead were rewarded with some beautiful smaller creatures. Numerous frogs or toads hopping into holes between stones. Lots of airborne creatures, although thankfully no midges. Beautiful dragonflies buzzing up and down the path around every corner, and even a leech sucking its way across a wet boulder in the middle of the path! 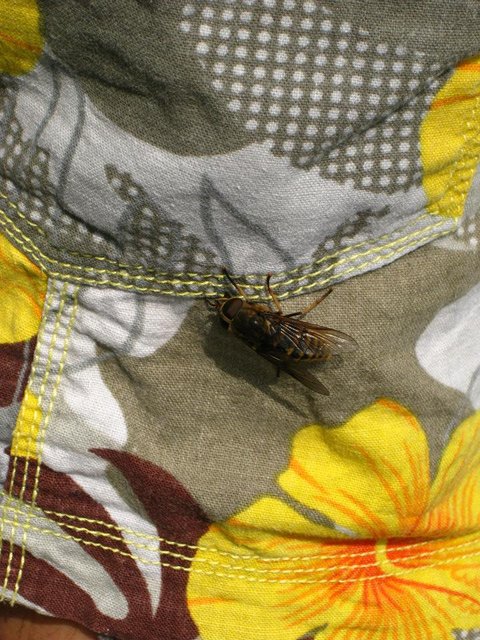 I wonder whether anyone can identify the creature directly above. Certainly not a wasp, and significantly larger. Is this the dreaded cleg? Anyway, it seemed more interested in my shorts than the rest of me. After leaving the trees the gradient does ease a little. Magnificent views stretching away over Loch Long - more intimate and more detailed than Cairngorms panoramas. After crossing the path which traverses the mountain at around the 330m contour, we briefly lost the path before rejoining it over a rocky knoll. The views really began to open out - again, the detail in the landscape is striking. Beinn Narnain is a jagged, multi-faceted little Munro, with plenty of interest for the eyes and the legs. The Spearhead reared its head beyond as slight depression - the scrambly gully up the side was a little like some climbs in the Lake District. Sunshine was breaking through. Another contrast between the west and the east relates to the people. I hope not to offend frequenters to the Cairngorms, but the few walkers you see there tend not to engage in conversation beyond the usual "hey" or "alright". I'd probably put myself in that generalisation too. Here in the Arrochar Alps, everybody who we saw seemed to want to have a chat, engage in conversation or ask questions about where we were headed / where we were from. People walk for different reasons and I'm certainly not saying one or the other is better, but it's interesting to notice such a difference - maybe that's just the Glaswegian way?

One group suggested a good rock to use to take "action" photos - good advice, with Ben Lomond in the background. The sun got in the way of pictures of the Cobbler, but it's firmly on the list of places to visit sooner rather than later. 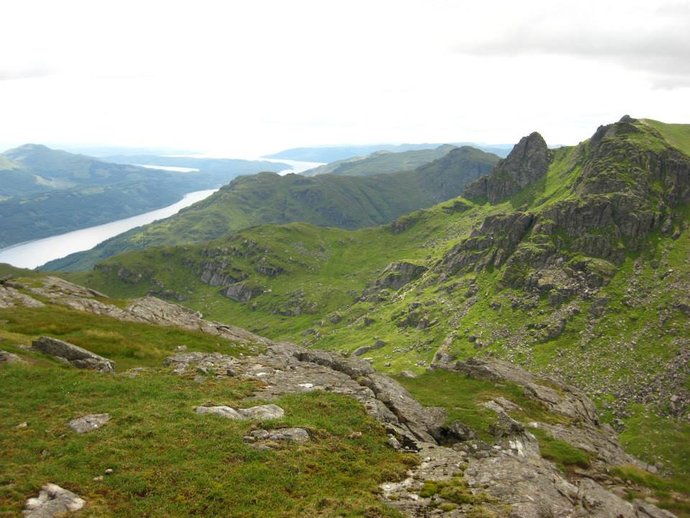 The summit of Beinn Narnain was just beyond, so lunch was too. It's a direct and therefore quick ascent to this point, contrasting with the long approach tracks and often gradual climbs which typify the walks further east. In terms of ascent however, reaching Beinn Narnain involves a climb literally from sea level, meaning it actually outstrips Ben Macdui from both the ski centre and Deeside, despite being one of the smaller Munros.

A quick descent to the bealach brought us to a soggy path up Beinn Ime - higher and bulkier than Beinn Narnain, with several more friendly people on the ascent. Looking back, Beinn Narnain showed off its grassier side - the route taken in descent. As height was regained, the traverse between Beinn Narnain and A' Chrois transforms into a graceful ridge. Ben Lomond seems to be visible from everywhere in this part of Scotland - even from just behind my house in Glasgow... The path up Beinn Ime is less interesting and soggier than the previous climb, but the view surpasses Beinn Narnain's - with a wider variety of summits visible. To the east, a trio of lochs - Lomond, Arklet and Katrine, the latter supplying water to Glasgow. Flat lands of Stirlingshire beyond. And the Trossachs - another as-yet-unvisited place high on the list. All that remained was the long descent back to sea level. On the way back down to the bealach, a farmer and sheepdogs provided some entertainment in skilfully rounding up some very widely dispersed sheep. Can't actually remember what this photo is of - is it the Cobbler on the way back down? Looking back to Beinn Ime as the sun came out more widely: The excellent path down Coire a' Bhalachain is a welcome way to end the walk - we probably have the popularity of the Cobbler to thank for that. It's also a welcome contrast to the Cairngorms, where our descents often seemed to cross large areas of heathery, pathless ground. The Cobbler can wait for another day: Finally the path re-enters the trees and zigzags back to the car park. This section took longer than expected, but provided ample time to soak up the beautiful views and reflect on a good day. A lot of the contrasts between the east and west are obvious ones, and most of them were anticipated. But it's still fascinating to experience the difference for real, knowing that western Scotland is where we'll be spending far more of our walking time now. Both have different appeals - just like different hills do. Of course, the other parts of Scotland bring different experiences into the equation too - we're looking forward to exploring the Central Belt and Southern Uplands too, for example.

Anyway, for any suspicious western Scots wishing those pesky easterners would stay away, I should say this - we so far have an unblemished record of 100% clag-free Munro ascents, so maybe we'll bring our good luck over to the west with us. And dare I say it, in the west you'll probably need it? Re: The big debate: east versus west on Ben Ime

How fascinating - I really appreciate you sharing your observations on the two areas. Of course, the best of both worlds is the north-west where you have the fantastic hills with solitude and friendly people. (I'm not in any way biased, of course!) Great report and photos.

Re: The big debate: east versus west on Ben Ime

Your insect may be a queen wasp, but no idea of the species. They are often much larger than their sisters and would be leaving their home nest about now to feed up and then find a safe spot to over-winter. Over to an expert for a positive ID.